Conventional MRI techniques generally provide morphological information of tissue structure, with the superior soft tissue contrast in the anatomical scale. These techniques have demonstrated their effectiveness in the context of oncologic diagnosis and staging. Despite their popularity, the lack of quantitative approach limits conventional MR techniques’ capacity in the derivation of biological processes that occur in the sub-anatomical scale. From radiotherapy perspective in oncologic treatment, it is important to recognize that functional properties, such as tumor cells density, tissue oxygenation, acidosis and microvessel activities, are important factors that influence the radiotherapy outcome via changing cell radiosensitivity[6]. Thus, reliable functional information is in demand to ensure the quality of radiotherapy. Over the past few decades, various MR quantitative methodologies have been developed for functional information assessment: Diffusion weighted imaging (DWI) reflects the cellular density via imaging the random motion of water molecules in the microscopic cellular environment. Under the same concept of capturing water mobility, diffusion tensor imaging (DTI) measures the anisotropic water diffusion process to characterize the tissue’s microstructural organization. MR spectroscopy utilizes its sensitivity to chemical shift and measures the concentration of metabolites of interest. Functional MRI uses blood-oxygen-level-dependent signal variation to quantify local neuronal activity changes. Dynamic contrast-enhanced (DCE) and dynamic susceptibility contrast (DSC) imaging acquires the rapid dynamics of the intravenously administered low molecular-weight contrast agents to depict the process of microvessel kinetics. For easy appreciation, Figures 1-3 show the examples of brain DWI, DTI and DCE data before and after radiotherapy. Previous works have proved MR functional quantitative imaging as a valuable tool to assess radiotherapy response[7-12]. However, various aspects including data reproducibility, interpretation of biomarkers, image quality and novel image analysis methodology all impose challenges on applications of MR functional quantitative imaging in radiotherapy assessment. 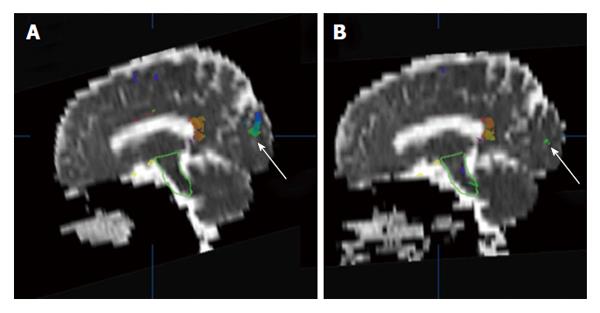 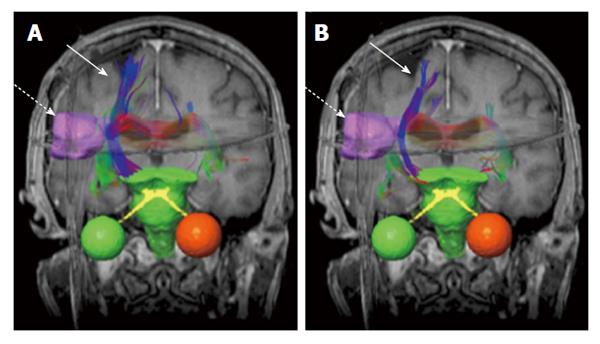 As defined by the Toward Quantitative Imaging task force of the Radiological Society of North America: Quantitative imaging is the extraction of quantitative information from clinical images, which can be used to assess change or status of an acute or chronic disease condition relative to normal[13]. In reality, various imaging protocols, scanners and data analysis methods may compromise the reproducibility of data, especially when it comes to multiple center clinical trials. To achieve this goal, standardized acquisition protocols, data analysis and assessment shall be promoted for MR quantitative imaging. As part of these initiatives, the Quantitative Imaging Biomarkers Alliance was established in 2007. The mission of this initiative was to promote and achieve useful and cost-effective standardization across the community on a large scale[13]. All of these efforts are to ensure that quantitative anatomical and physiological information can be accurately and precisely obtained from clinical images and as such can be applied to research and patient care.

Though functional biomarkers serve as metrics for functional information evaluation, the physiologic meanings of the selected imaging biomarkers need to be fully examined towards the future clinical application. The interpretation of functional biomarkers quantitative results may depend on the image technical parameters, imaging site, physiologic model selection, and patient’s physiologic variability. For example, as the reported imaging biomarker in DWI, apparent diffusion coefficient (ADC) calculation is affected by the amplitude, duration and spacing of diffusion weighted gradient (jointly expressed as b value) in the pulse sequence. Studies have revealed that different selection of b value had influence on white matter ADC value in brain analysis, and the variation of ADC value showed the potential effect in long-term assessment results[14,15]. In addition, the varying size and location of tumor in different patients with rectal cancer have been shown to have a considerable effect on tumor ADC values[16]. In DCE imaging, the nomenclature of tracer kinetics has been standardized. Nevertheless, when different pharmacokinetics (PK) model are adopted for analysis, the parameters’ may needs to be understood in different ways. Even when same PK model was used, large differences have been reported in the value of contrast agent transfer constant Ktrans in tissue[17,18]. Thus, for the accurate interpretation of functional biomarkers, the correlation of these biomarkers with histological markers shall be validated through rigorous and comprehensive studies. It is crucial to understand how and why these biomarkers can be correlated with clinical outcome.

It is also important to point out that the data consistency between results from MR functional quantitative imaging and those from other imaging modalities may also affect the validity of MR biomarkers’ interpretation. For example, DSC imaging was developed for perfusion study and has been identified by the American Heart Association as a priority for acute stroke treatment[19]. In the brain perfusion quantification, noticeable discrepancies of cerebral blood flow and cerebral blood volume were reported between DSC and gold standard PET measurements[20,21]. Such discrepancies render the quantitative DSC study challenging and elusive. While some studies investigated methods correcting the data discrepancy in DSC studies[22], the issue is not yet completed resolved. The recently emerging PET/MRI modality provides simultaneous MR and PET measurements and might be a valuable tool to help resolve the long standing issue[23]. Future works on PET/MR perfusion research are needed to improve interpretation and quantification of MR perfusion biomarkers.

For the radiotherapy assessment purpose, it is important to recognize that image quality of MR functional quantitative imaging may potentially affect the quantitative assessment outcome. Of the factors that contribute to the image quality, spatial resolution is crucial for the precise delineation of target volume. In current state-of-art advanced radiation treatments such as stereotactic radiosurgery and stereotactic body radiotherapy, the target volume is often small while high radiation dose is delivered in a limited number of fractions. Therefore, the target volume needs to be accurately delineated with high spatial resolution to ensure the highly conformal dose distribution. Therefore, clinical needs demand high spatial resolution MR functional quantitative imaging, which has not yet been well developed. Geometrical accuracy is another matter of concern for radiotherapy. As a commonly used imaging technique for clinical investigations, DWI suffers from geometrical deformations that are generally associated with the field inhomogeneity problem using echo-planar imaging sequence[24] (Figure 4). In Brachytherapy, this deformation may have a prominent effect on treatment assessment, where the dose from radiation sources falls quadratically with the distance. 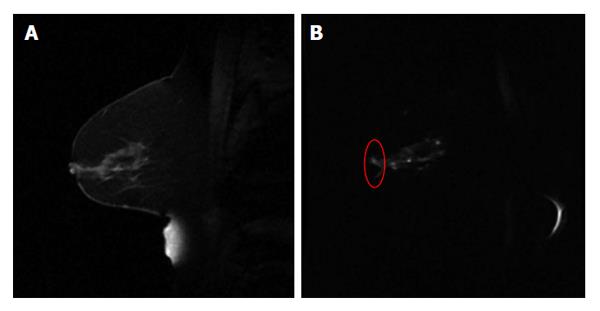 Figure 4 An example of sagittal breast T1w image (A) and the diffusion weighted image (b = 500 mm2/s) using echo planar imaging sequence (B). The red circle in (B) highlights the distorted breast boundary.

As another key factor of MR functional quantitative imaging quality, temporal resolution may affect the accuracy of the dynamics analysis. To assess the permeability and perfusion information using DCE imaging, the arterial input function (AIF) depicting the dynamics of tracers in arterial blood needs to be determined via imaging a major arterial structure in the imaged volume, and the fast acquisition of a second per volume is in demand for the reliable capture of rapid wash-in and wash-out features of AIF[25]. However, because the current imaging time for a 3D volume is often not fast enough (to capture AIF information from a qualified arterial structure for such measurement), population-derived mathematical AIF models are widely used for DCE analysis instead. As simple approaches ignoring the individual physiologic features, these AIF models may introduce errors to the functional parameter results[26]. Parallel imaging techniques have been proposed to accelerate the image acquisition, but the tradeoff of signal-to-noise ratio limits the reliability of the derived quantitative results[27]. Recently, iterative MR reconstruction using undersampled image data with newly-developed mathematical concepts has been proposed. Though shown promising, the reproducibility of functional quantitative results needs to be validated with comprehensive studies.

In treatment assessment, it is always critical to accurately interpret and analyze the functional data to reveal underlying context of a tumor or a specific critical organ. Currently, metrics including the average/median value of a certain functional parameter within the region-of-interest and the target volume identified by thresholding the parametric map are widely reported in radiotherapies studies. Focusing on the absolute quantity, these approaches may miss the underlying morphological information hidden in the functional images. As an emerging topic in treatment assessment, image texture features have been investigated for their feasibilities of monitoring treatment assessment[28-30]. As some of the texture features, especially the grey-tone spatial-dependence matrix (GTSDM) features, are defined independent of the parameter’s absolute values, these texture features may be preferred in the case when the quantitative parameter values are not fully reliable. Another promising and interesting topic in the field is to use multiparametric functional MR for assessment purpose. With statistical approaches, multiparametric MR including both anatomical and functional images have been studied in tumor localization and staging[31-33]. Since the mechanisms of some of the functional changes in response to radiotherapy have not been fully understood yet, the creditability of multiparametric MR study results in radiotherapy response may be undermined. With an ultimate goal of individualized radiotherapy, the imaging modalities, imaging parameters, statistical packages and other factors in multiparametric functional MR study need to be standardized and optimized to ensure adequate application to radiotherapy assessment.

Further development and research is needed to understand and validate whether MR quantitative imaging is truly beneficial to future radiotherapy treatment. Being a promising imaging modality, MRI not only plays a critical role in diagnosis, but also may lead the future directions of radiotherapy.

The authors would like to thank Kevin Kelly in our department for his help with DCE-MRI data acquisition. We would also like to thank Taylor Richards for his comments and language improvements.