Anophthalmia is a condition of the absence of an eye and the presence of a small eye within the orbit. It is associated with many known syndromes. Clinical findings, as well as imaging modalities and genetic analysis, are important in making the diagnosis. Imaging modalities are crucial scanning methods. Cryptophthalmos, cyclopia, synophthalmia and congenital cystic eye should be considered in differential diagnoses. We report two clinical anophthalmic siblings, emphasizing the importance of neuroradiological and orbital imaging findings in distinguishing true congenital anophthalmia from clinical anophthalmia.

Two siblings, one a 27-year-old male (Figure 1A) and the other a 40-year-old female (Figure 1B), with anophthalmia attended the ophthalmology clinic. They were 2 of 9 siblings in a family. There was no consanguinity between their dead parents and the other siblings did not have anophthalmia or microphthalmia. Systematic physical examination and laboratory workup, including thoracoabdominal magnetic resonance imaging (MRI), were normal and the two siblings were considered to have isolated anophthalmia. Brain MRI was performed to exclude any accompanying central nervous system malformation. T1-weighted images (WI), T2-WI and post-contrast T1-WI were obtained at axial, sagittal and coronal planes. Orbital MRI was also performed to show intraorbital structures. In both cases, the globes were found to be quite small and cystic in appearance. Cornea, lens and sclera were not observed (Figure 2). Axial length of the globe was 4 mm on the right and 11 mm on the left of 27-year-old male (Figure 2A) and in the 40-year-old female, the right globe was 2 mm and the left globe was 4 mm (Figure 2B). Although both optic nerves were hypoplastic in the intraconal orbital space, the optic nerves were not found at the distal optic canal in both patients (Figure 3). In these two cases, the lacrimal glands, extraocular muscles and the eyelids were observed. Brain MRI did not show any accompanying central nervous system abnormality. 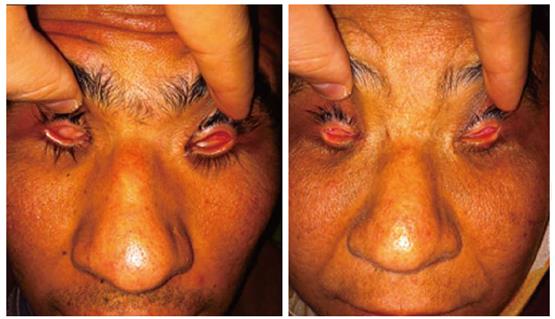 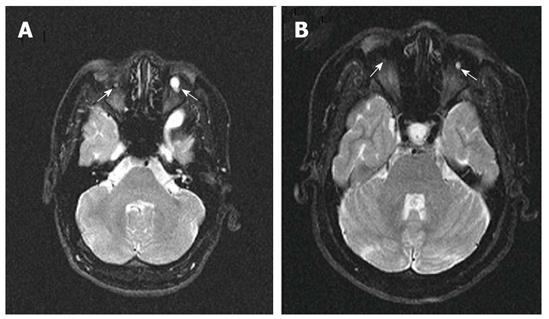 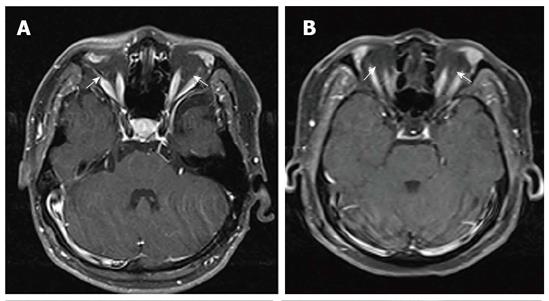 The spectrum of clinical anophthalmia includes severe microphthalmia, in which a small amount of ocular tissue can be found in the orbit on neuroimaging, even although the globe may appear to be absent externally[3]. Once the diagnosis has been established, systematic examination with both ocular and systemic imaging tests (ultrasonography, computed tomography, MRI) should be performed to rule out additional neurological, renal, cardiac or other associations[2]. Cases associated with other congenital systemic abnormalities have been reported in many syndromes, such as Fraser, Fryns, Waardenburg or Matthew-Wood[4]. Many microphthalmia patients have additional congenital ocular anomalies and associated neurological abnormalities[5]. A study conducted by Jacquemin et al[6] concluded that patients with clinical anophthalmia share a similar constellation of neurological, somatic and neuroradiological abnormalities as patients with microphthalmia. However, Schittkowski et al[7] mentioned that anophthalmia is a poorer prognostic factor than microphthalmia in terms of its association with a wide range of systemic diseases and they also described that patients with bilateral anophthalmia are characterized mainly by additional intracranial anomalies. Brunquell et al[8] described a case of anophthalmia in which severe developmental disorders and locomotor defects were recognized.

Albernaz et al[9] reported imaging findings of a clinical anophthalmia case series in which there were a variety of intraorbital, intracranial and craniofacial anomalies. The high rate of intracranial anomalies in their patients with bilateral anophthalmia suggests overall maldevelopment of the forebrain structures and failure of formation or degeneration of the optic vesicles during early gestation. MR imaging of anophthalmia cases showed amorphous tissues of isointense signal intensity with muscle on T1-WI and markedly hypointense on T2-WI. The imaging characteristics were probably due to fibrosis. These imaging features provide distinction of anophthalmia from severe microphthalmia, which is a condition of identifying a tiny globe with the normal signal intensity of the vitreous and lens[9].

However, in both of our case series, there was no syndromic condition present. Orbital and brain MRI helped us to discern the cases to be clinical anophthalmia or true anophthalmia without the need of histopathological studies. In our patients there was a bilateral hypoplastic optic nerve in the intraconal orbital space. The optic nerve was not found at the distal optic canal in both patients. There were no other central nervous system abnormalities in the brain MRI, including the posterior visual pathways. The signal intensities of rudimentary eyeballs were hypointense on T1-WI and iso-hyperintense on T2-WI due to their contents.

For depiction of the rudimentary optic nerves, optic tracts and intraorbital contents, as well as concomitant intracranial pathologies such as partial agenesis of the corpus callosum and microgyria, MRI is superior to CT[10].

In summary, we believe that the findings of orbital and brain MRI in patients diagnosed with anophthalmia has an important role in diagnosis and differentiation of cases as true anophthalmia or clinical anophthalmia.

The main limitation of the study is its nature of being a case report. More comprehensive clinical studies with anophthalmic patients are needed to emphasize the importance of neuroradiological imaging.

Anophthalmia without any systemic manifestations can be seen. Clinicians must cooperate with radiologists in cases of anophthalmia, whether true anophthalmia or severe microphthalmia.

Clinicians are strongly advised to investigate for systemic abnormalities in cases of anophthalmia. Neuroradiological imaging has an important role in diagnosing central nervous system associations with anophthalmia.

Anophthalmia is the result of insufficient development or complete regression of the optic vesicle.

The manuscript presents a rare case of two siblings with anophthalmia, demonstrating the importance of neuroradiological imaging in making the diagnosis and differentiating the case as true anophthalmia or clinical anophthalmia. It also provides a literature review regarding the intraorbital, intracranial and craniofacial anomalies associated with anophthalmia.