Core tip: Aicardi syndrome is a rare genetic disease characterized by a characteristic classical trio of neurological clinical abnormalities (spasms), agenesis of the corpus callosum and ophthalmological abnormalities (chorioretinal lacunae). The diagnosis can be suspected by prenatal ultrasound with color Doppler identifying the agenesis of the corpus callosum. Usually, the diagnosis is confirmed in the neonate period by transfontanellar ultrasound and ophthalmological examination. Tranfontanellar ultrasound is a cheap and affordable method, with similar accuracy of magnetic resonance imaging.

Aicardi syndrome is a rare genetic disease that was described for the first time in 1965, by Aicardi et al[1], who studied 117 cases of spasms in infants and discovered eight new cases that comprised this syndrome. This syndrome is formed by a characteristic classical trio of neurological clinical abnormalities (spasms), agenesis of the corpus callosum and ophthalmological abnormalities (chorioretinal lacunae). Here, we describe a case of Aicardi syndrome diagnosed in the immediate postnatal period by means of transfontanellar ultrasonography, and illustrate the main abnormalities of this case.

A female newborn of gestational age 39 wk and Apgar score 8/9 started to show a condition of spasms in flexion, during the immediate postnatal period. Prenatal ultrasonographic examinations had not shown any alterations at the cephalic pole. Physical examination showed that the cranial circumference was at the lower limit of normality, and ophthalmological examination showed chorioretinal lacunae bilaterally (Figure 1A, B). The ultrasonographic examination was done using the Vivid 3 apparatus (General Electric Healthcare, Zipf, Austria), by means of a multifrequency linear transducer, through the anterior transfontanellar route. Partial dysgenesis of the corpus callosum was seen (Figure 1C, D), with a cyst in the inter-hemispheric fissure measuring 31.2 mm × 18.9 mm × 15.7 mm and porencephaly (Figure 2), without evidence of ventricular dilatation. No other encephalic morphological abnormalities were observed. 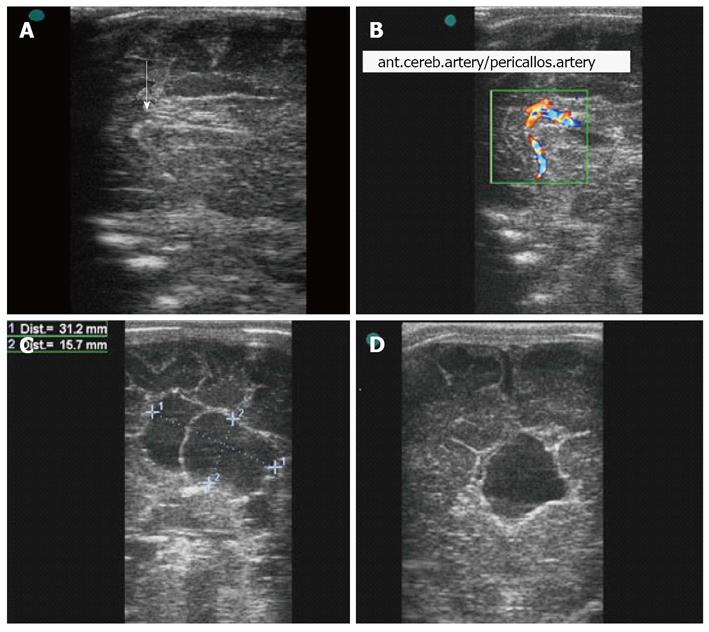 The majority of the cases of Aicardi syndrome have been reported in females, but two cases in males with 47,XXY karyotypes have also been observed. There is still no consensus regarding its etiology, but the most likely hypothesis is that it comes from a short-arm mutation linked to chromosome X, which presents in a heterozygous form in females and is lethal to males[2]. However, there are some evidences of genomic rearrangements involved in the etiology of Aicardi syndrome. Bursztejn et al[3] reported an 8-year-old girl with an initial diagnosis of Aicardi syndrome who subsequently found to carry a de novo 11.73-Mb terminal deletion of 1p36 chromosome band and emphasized the phenotypic overlap between the 2 disorders. Prontera et al[4] reported a case of a girl with 21-year-old presenting Aicardi syndrome with a 6q deletion; 12q duplication, derived from a maternal 6q; 12q translocation. Spennato et al[5] described a case of a 36-year-old female patient, carrier of a 45,X0/46,XX mosaicism, showing a complex clinical picture including the signs of both Turner and Aicardi syndromes.

The most frequent neurological alterations, which start in the first year of life, include tonic convulsive or limited clonic spasms. The spasms are predominantly asymmetrical, with hemiparesis or hemiplegia on the side that is more affected. These spasms are usually the first manifestation for screening of Aicardi syndrome. The cranial circumference at birth may be within the limits of normality, although a certain degree of microcephaly may be observed[6].

Among the main ophthalmological abnormalities of Aicardi syndrome, choroidal filling defects of varying sizes, shapes, colors and location can be highlighted. Some characteristics are more frequently observed, such as peripapillary chorioretinal lacunae, of white color with rounded edges, although they can also be yellowish, pinkish and shiny, and can be multilobular. Other ophthalmological abnormalities that have been reported include: coloboma, detachment of the retina, hypoplasia of the optic nerve, macular scars, remnant pupil membranes, pseudoglioma, cataracts, retro-bulbar cysts, synechiae and microphthalmia[7]. Sutton et al[8] assessed the frequency of ophthalmologic finding of Aicardi syndrome in 20 girls. The most common findings were chorioretinal lacunae in 66 (88%) of 75 eyes and optic nerve abnormalities in 61 (81%) of 75 eyes. Other less common findings included persistent pupillary membrane in 4 (5%) of 79 eyes and anterior synechiae in 1 of 79 eyes (1%).

Classical craniofacial features in Aicardi syndrome that have been described include a small philtrum with upturned nasal tip and decreased angle of the nasal bridge, big ears, prominent premaxilla and sparse eyebrows on lateral aspects, but these were not present in our case[8]. Skeletal anomalies such as fused vertebrae, hemi-vertebrae, blocked vertebrae and absent ribs could be present, which may lead to scoliosis[9].

Imaging diagnostic methods may reveal conditions ranging from classical findings like partial or total agenesis of the corpus callosum to other findings like ventricular dilatation, hydrocephaly and cortical heterotopy[10]. Dysgenesis of the corpus callosum may occur together with other midline abnormalities, such as Chiari II malformation, holoprosencephaly, Dandy-Walker malformation, septo-optic dysplasia and median facial cleft syndrome.

Magnetic resonance imaging (MRI) is the gold-standard examination for diagnosing this syndrome. In the largest study on Aicardi syndrome so far produced, 95% of the 23 patients (all the cases were female) presented frontal/perisylvian polymicrogyria and single or multiple intracranial cysts. These cysts were on the midline in 81% of the cases[10]. Hopkins et al[11] assessed the relationship between laterality of brain and ocular lesions in Aicardi syndrome. These authors assessed 26 subjects between 3 mo and 19 years old. Ocular and brain MRI asymmetry was found in 18% (4/22) and 58% (15/26) of subjects, respectively, with more right sided brain lesions than left. A significant correlation between sidedness of brain disease and microphthalmos was observed. Singh et al[12] described a case of Aicardi syndrome in a 4.5-mo-old baby. MRI revealed hypogenesis of the corpus callosum, polymicrogyria, interhemispheric cyst and periventricular nodular subependymal grey matter heterotopia along the body of the left lateral ventricle.

In summary, we have presented a classical case of Aicardi syndrome that was diagnosed during the neonatal period by means of transfontanellar ultrasonography. This method may provide sufficient support for making an early diagnosis of this syndrome, without radioactive and anesthetic risks, as well as the facility of being performed on the hospital bed.

A female newborn of gestational age 39 wk and Apgar score 8/9 started to show a condition of spasms in flexion, during the immediate postnatal period.

Magnetic resonance imaging is the imaging method used for confirming the diagnosis.

The majority of the cases of Aicardi syndrome have been reported in females, but two cases in males with 47,XXY karyotypes have also been observed.

This paper is beneficial for the clinical practitioners. A systematic approach to find more compulsory information leads to provide more beneficial manuscript.