A 56-year-old man presented with a 6-mo history of headache. Although neurological and laboratory examinations were normal, computed tomography (CT) scan was performed which revealed multiple occipital osteolytic lesions, which were suspected to be multiple myeloma. Subsequently nuclear magnetic resonance imaging (MRI) showed that these lesions presented with a cerebrospinal fluid (CSF)-like signal intensity, no diffusional restriction and intrinsic mass-like enhancement on conventional sequences were seen. T2 relaxation time was similar to that of CSF in the ventricles and adjacent subarachnoid space on T2-mapping. Single photon emission CT with 99mTc-Methyl diphosphonate was performed which revealed no increased radiotracing accumulation. Finally, these lesions were diagnosed as mutiple arachnoid granulations (AGs). The headache was treated symptomatically with medical therapy. On follow up examination after 6 mo no evidence of tumor was detected. This report aimed to illustrate the appearance and differentiation of occipital defects caused by multiple AGs on CT and MRI, with emphasis on the findings from T2 mapping.

Arachnoid granulations (AGs) are tufts of arachnoid membrane invaginated into the dural sinuses through which cerebrospinal fluid (CSF) enters the venous system. The lesions are primarily located in the parasagittal region along the superior sagittal sinus[1], which is occasionally seen at the transverse sinus. Normally dural venous sinus AGs typically range from 2 to 8 mm in size, but may grow enough to expand the dural sinuses, and even the inner table, diploic space and outer table of the skull[2].

Although AGs can also produce bone defects[3], due to their infrequency, multiple AGs leading to osteolytic lesions within the occipital area have been incompletely characterized and could be responsible for diagnostic confusion, and sometimes represent a diagnostic challenge even for experienced radiologists. Identification of normal AGs within the occipital region may reduce the erroneous diagnosis of a malignant pathologic process. This case report described the imaging features of such AGs that allow differentiation from pathology on computed tomography (CT), standard magnetic resonance imaging (MRI), and T2-mapping, which may help many radiologists, especially young doctors, reduce the misdiagnosis rate of AGs.

A 56-year-old man with a 6-mo history of headache was referred to our hospital. Neurological and general physical examinations were normal. Nonenhanced CT of the brain was performed which revealed multiple osteolytic lesions in the occipital area (Figure 1), with sharp but slightly irregular margins; no bone spicules or calcifications were present. The lesions were suspected to be multiple myeloma. On laboratory examination, there was no evidence of systemic myelomatous changes or anemia and urine analysis was completely normal with no evidence of Bence-Jones protein and excretion of immunoglobulin elements. The screening tests for tumor markers were negative. Subsequently MRI showed that signal intensity within the bone erosions was isointense to CSF, hypointense relative to the brain on T1-weighted image (T1WI) (Figure 2A), hyperintense relative to the brain on T2-weighted image (T2WI), with a banded lower signal most likely representing the intra-AGs collagenous connective tissue (Figure 2B and C), complete suppression on fluid attenuated inversion recovery (FLAIR) (Figure 2D), no restricted diffusion on diffusion-weighted imaging (DWI) (Figure 2E) and no mass-like enhancement on contrast-enhanced T1WI (Figure 2F). The three-dimensional fast imaging employing steady state acquisition (3D FIESTA) showed that the adjacent subarachnoid space communicated with the AGs (Figure 3A). T2 relaxation time was similar to that of CSF in the ventricles and adjacent subarachnoid space on T2-mapping (Figure 3B and C). For further investigation to detect possible metastases, single photon emission CT (SPECT) with 99mTc-Methyl diphosphonate (99mTc-MDP) was performed which revealed no increased radiotracing accumulation (Figure 3D). On the basis of these findings, the erosions were identified as multiple AGs and the headache was managed with symptomatic treatment. The patient has been followed up for 6 mo without change. 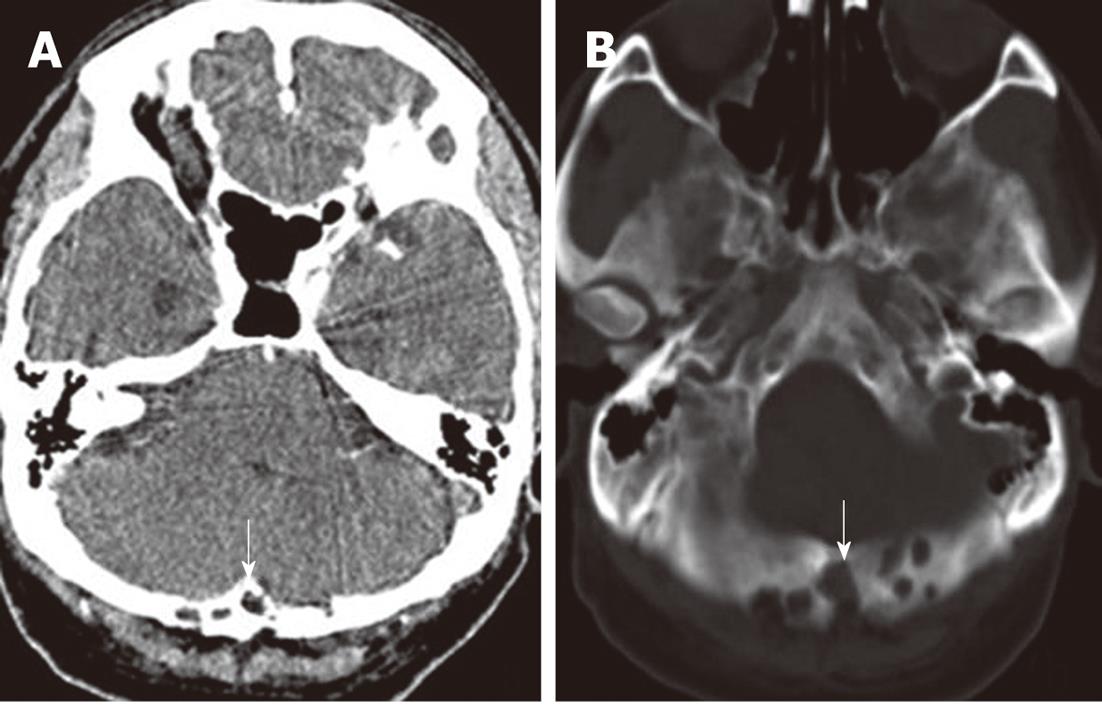 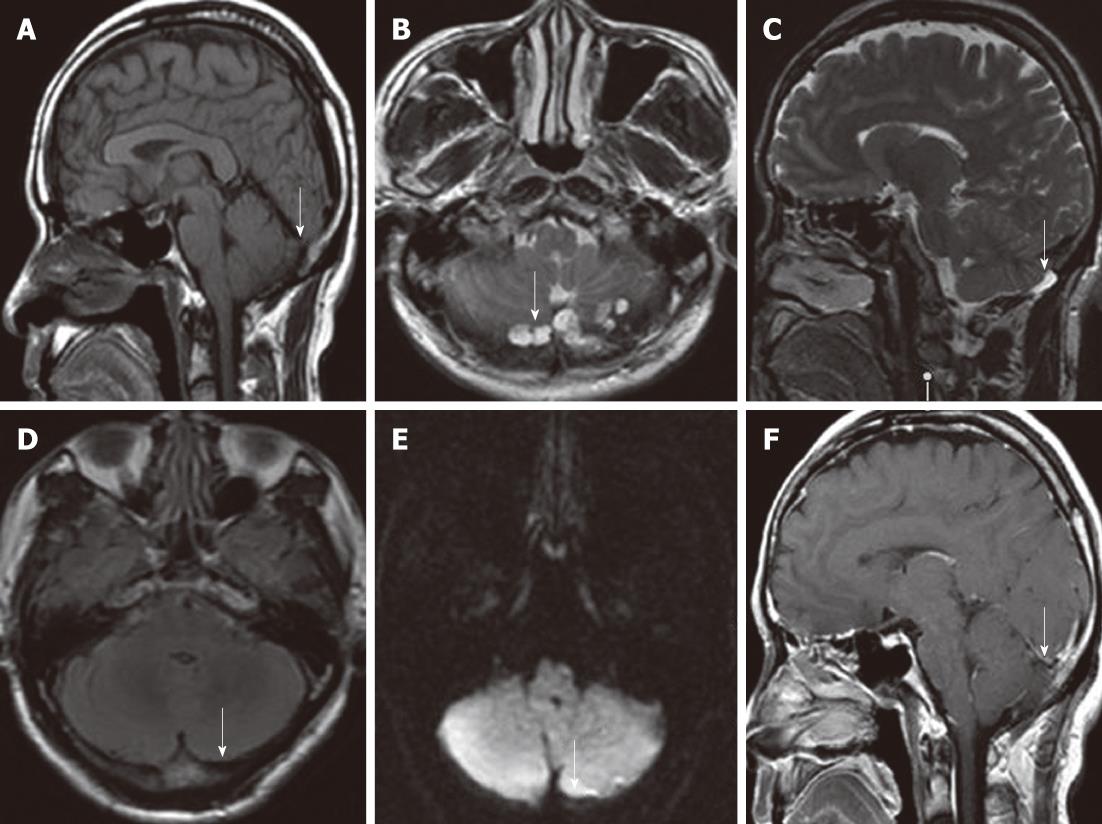 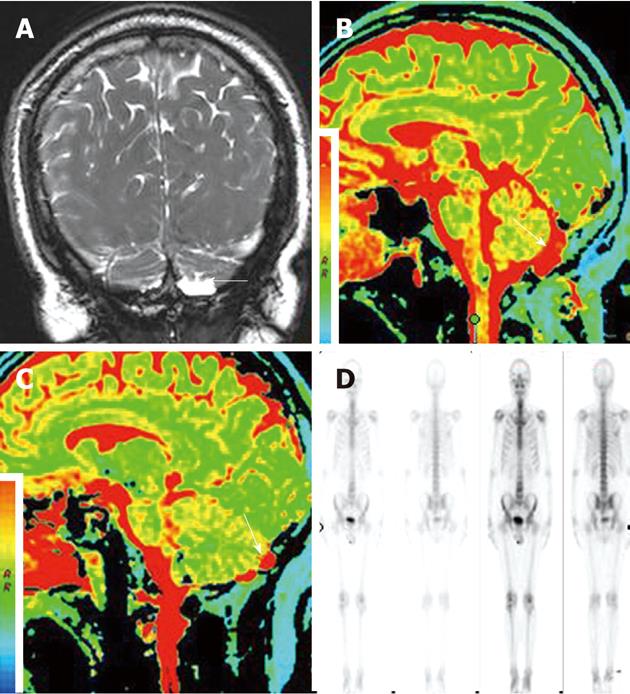 CSF is synthesized and produced by the choroid plexus in the lateral, third, and fourth ventricles where it circulates to the subarachnoid space and eventually returns to the venous blood via the AGs. Histologically, AGs are composed of dense collagenous connective tissue admixed with clusters of arachnoid cells and a network of delicate vascular space filled with CSF from the contiguous subarachnoid space. This cell layer was continuous with the underlying arachnoid membrane[4].

AGs are growths of arachnoid membrane into the dural sinuses which have a wide variability in the site, number, size and morphology[5]. Occasionally, these extend partly up to the inner table of the skull as so called foveolae granulations, and even expand into the diploic space and eventually involve the outer table, mimicking malignant osteolytic lesions. It was thought that some AGs hypertrophy was in response to increasing CSF volume and pressure[6]. The most common site for AGs is at the superior sagittal sinus[5,7]. The occipital and temporal bone defects caused by AGs in the transverse sinus and sigmoid sinus, respectively, were rarely reported[2,8]. In this case, multiple AGs which led to occipital bone defects were located at the transverse sinus, and varied in diameter with a range of 5 to 17 mm, and showed expansion into the outer table.

The clinical significance of AGs is uncertain. Most cases are usually asymptomatic and there are incidental findings on imaging studies, while some giant AGs may cause dural venous sinus pressure gradients and headache[2]. In this case, the headache might be closely associated with multiple AGs.

AGs were identified on skull radiography as smoothly marginated impressions in the inner table of the calvarium. Typically, regardless of size AGs were commonly diagnosed by identifying intra-AG fluid which was revealed as CSF-like attenuation on CT and parallel CSF signal intensity on all MRI sequences, which was a conventional diagnostic criterion for AGs[2]. Haroun et al[5] thought that the identification of AGs could be facilitated by their characteristic appearances: rounded or oval shape, well-defined outlines and homogenous intensity; the presence of an adjacent cortical vein can be considered as an additional supportive element. Trimble et al[2] found that AGs may be complex structures whose contents do not invariably parallel CSF signal intensity. In this case, AGs presented as occipital erosions with CSF-like attenuation and a lobulated surface on nonenhanced CT, hypointense relative to the brain on T1WI, isointense to CSF on T2WI and 3D FIESTA, with linear hypointense components which may represent the internal fibrous structure of AGs, complete suppression on FLAIR, no restricted diffusion on DWI, and no gadolinium enhancement on postcontrast T1WI. In addition, the intra-AG fluid signal intensity was assessed quantitatively and compared with CSF in the ventricles and adjacent subarachnoid space on T2-mapping. T2 relaxation time of intra-AG contents paralleled that of CSF.

Differentiation should be primarily made from multiple myeloma and metastatic tumor. In addition, arachnoid cysts, dermoids and epidermoid also should be excluded. The key MRI features of AGs were very well-defined CSF-like signal intensity protuberances. No enhancement or aggressive appearance like typical neoplasms, such as multiple myeloma and metastatic tumor, no fat signal intensity or attenuation to suggest dermoid, and no restricted diffusion to suggest epidermoid were present[7]. For narrowing the differential diagnosis, SPECT with 99mTc-MDP was performed in order to functionally characterize the lesion[9]. In this case, no uptake of 99mTc-MDP which was explained by the hypovascularity and low metabolic activity was observed. In this case, despite lack of biopsy-proved results, additional supports for AGs such as CT imaging, conventional MRI sequences, quantitative T2 relaxation time analysis, exclusive methods for diagnosis of other diseases such as SPECT, laboratory tests, and 6-mo follow-up were performed. All of these strongly supported the presence of AGs.

In conclusion, multiple AGs can occur in the transverse sinus and lead to occipital osteolytic lesions which may be mistaken for other pathology due to rare presentation of AGs. A careful analysis of MR imaging characteristics especially quantitative T2 relaxation time paralleling that of CSF should lead to the correct diagnosis.