METHODS: Forty consecutive patients underwent contrast-enhanced biphasic MDCT (arterial and portal-venous phase) using a 64-slice MDCT. In 20 patients, the scan protocol was adapted from a previously used 40-channel MDCT scanner with arterial phase scanning initiated 11.1 s after a threshold of 150 HU was reached in the descending aorta, using automatic bolus tracking (Protocol 1). The 11.1-s delay was changed to 15 s in the other 20 patients to reflect the shorter scanning times on the 64-channel MDCT compared to the previous 40-channel system (Protocol 2). HU values were measured in the head and tail of the pancreas in the arterial and portal-venous phase.

Contrast-enhanced multidetector computed tomography (MDCT) for pancreatic imaging is widely accepted, especially for detection and preoperative staging of pancreatic adenocarcinoma, as well as for diagnosis and follow-up examinations of patients with pancreatitis. Scanning protocols are usually multiphasic with acquirement of arterial and portal-venous phases of contrast material (CM) enhancement.

Several studies[1-3] have been conducted to evaluate the appropriate scan timing to achieve optimal CM enhancement. To the best of our knowledge, the data published to date have evaluated CM enhancement of pancreatic parenchyma with scan protocols for MDCT scanners with up to 16 detector rows. The purpose of our study was to compare different MDCT protocols for a 64-slice MDCT scanner to achieve a better pancreatic contrast enhancement protocol.

Written consent was obtained from each patient or patient’s legal representative before CT examination. Exclusion criteria included general contraindications for CT including pregnancy and allergy to CM, as well as known pancreatic tumor and pancreatitis.

In 20 patients, the scan protocol was adapted from a previously used 40-channel MDCT scanner with arterial phase scanning initiated 11.1 s after a threshold of 150 HU was reached in the descending aorta using automatic bolus tracking (Protocol 1). The delay was changed to 15 s in the other 20 patients to reflect the shorter scanning times on the 64-channel MDCT compared to the previous 40-channel system (Protocol 2). The delay of the portal-venous phase acquisition was set to 60 s after onset of arterial phase. For all scans, the scanner parameters were set as follows: arterial phase (120 kv, 200-300 mAs, collimation 64 × 0.625, pitch: 0.9, reconstructed slice thickness: 0.8 mm), portal-venous phase (120 kv, 180-250 mAs, collimation 64 × 0.625, pitch: 0.9, reconstructed slice thickness: 2 mm). CT images were reviewed digitally on a dedicated PACS workstation (Impax 4.5; AGFA Healthcare, Köln, Germany). Attenuation levels were measured in the head and tail of the pancreas in the arterial and portal-venous phase by an attending radiologist with 8 years of experience in reading abdominal CT. The size of the measurement region ranged from 0.45 to 0.55 cm2. Focal lesions within the pancreatic tissue were excluded from measurement areas. The differences between the groups were investigated by an exploratory unpaired t test. P < 0.01 was considered statistically significant. 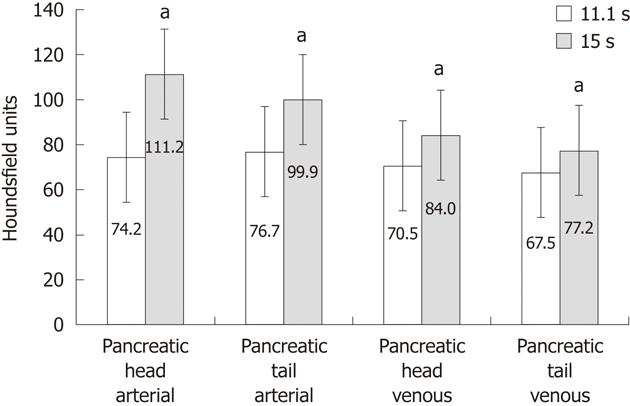 Figure 2 Axial arterial phase multidetector computed tomography image in a 58-year-old male patient with weight loss. A:The scan delay for multidetector computed tomography examination was 15 s. The mean attenuation level was 125.0 HU in the pancreatic head; B: Within the parenchyma of the pancreatic tail, the mean attenuation value was 122.8 HU.
DISCUSSION

In our study, we found significant differences in attenuation levels of pancreatic parenchyma between the scan protocols with an 11-s vs 15-s delay for the start of the arterial phase. HU values in the portal-venous phase were also significantly higher using Protocol 2 instead of Protocol 1. Our findings suggest that higher pancreatic parenchymal attenuation and therefore increased tumor-to-pancreas contrast can be obtained by optimizing scan protocols when using faster MDCT scanners.

One of the limitations of our study was the relatively small number of 40 patients and the fact that we only used one manufacturer’s 64-channel MDCT scanner. The attenuation levels of pancreatic parenchyma may differ with different types of MDCT generations or scanners. Birnbaum et al[11] assessed intra- and interscanner variability using an anthropomorphic body CT phantom, showing that there are significant differences of CT attenuation levels between different MDCT scanner generations as well as between different manufacturers’ scanners. Further studies should investigate the influence of scan delays for pancreatic imaging with different manufacturer’s scanners.

Scanning protocols for pancreatic imaging with multidetector row computed tomography (MDCT) are usually multiphasic with acquisition of arterial and portal-venous phases of contrast material (CM) enhancement. Due to the faster scanning speed, a redesign of scanning protocols is required.

Pancreatic parenchyma can contain benign or malignant lesions that should be classified by pancreatic imaging in order to prevent unnecessary operations. Achievement of optimal CM enhancement is mandatory for evaluation of pancreatic lesions. CT scanners of newer generations consist of more detector rows, allowing faster scanning of patients and thinner imaging slices.

The study results suggest that 64 MDCT may achieve higher contrast in pancreatic studies with appropriate optimization of scan delay time. This may help to optimize pancreatic imaging.

It is an interesting paper, but it should be revised before publication.