Ankylosing spondylitis (AS) is a chronic inflammatory multisystem disorder which primarily affects the axial skeleton and peripheral joints. Pleuroparenchymal involvement is uncommon and is seen in the later stages of the disease or may follow an asymptomatic clinical course[1,2]. The rate of pleuroparenchymal involvement has been reported in various small clinical studies to be 0%-85% in X-ray or high resolution computed tomography (HRCT) studies[1-14]. The most frequently seen symptoms are; upper lobe fibrobullous disease, interstitial lung disease, pleural thickening, pleural effusion and the formation of mycetoma[1,6]. Less often, emphysema, pneumothorax, and cor pulmonale have been reported[6]. These changes seen in AS were observed using by X-rays, respiratory function tests, bronchoalveolar lavage and transbronchial biopsy in previous studies[1]. HRCT changes have been described in more recent studies, however, these studies have involved only a small number of patients. The highest number of patients included in these studies was 55[9]. In addition, fewer HRCT findings were evaluated. The aim of this study was to determine the rate of lung parenchymal changes in 78 AS patients by evaluating more HRCT parameters, and to carry out a more detailed examination of the HRCT studies.

Our study included 78 AS cases who were diagnosed according to the Modified New York Criteria[15] in the Physical Therapy and Rehabilitation Department between 2006 and 2009. The mean age of the group was 33.87 years with a range of 18-56 years and the mean disease duration was 3.88 years, with a range of 1-22 years. The study group included 25 female (32.05%) and 53 male (67.95%) patients. The mean age at initial diagnosis was 27.05 years, with a range of 8-54 years. Thirty-one percent of patients were smokers and 47 patients were nonsmokers. Fifty-one (65.38%) of the 78 patients had no respiratory symptoms at the time of starting the study. Of the 27 patients with respiratory symptoms, 13 patients complained of dyspnea, nine had a cough and 20 patients had pleural pain. None of the patients had respiratory findings, such as hemoptysis, cyanosis and clubbing. Mean chest expansion among the study group was 2.21 cm, range 0.5-6 cm (normal > 3 cm). Patients who had a history of allergies, pneumonia, tuberculosis or other pulmonary diseases were excluded. Demographic information on the patients is shown in Table 1.

Two radiologists (Hasiloglu ZI and Havan N, with 10 and 5 years of experience, respectively) reviewed the chest radiography and HRCT images. The observers documented the following features on HRCT images: parenchymal micronodules, localized round areas of increased attenuation smaller than 1 cm; parenchymal bands, nonvascular parenchymal linear bands longer than 3 cm; subpleural bands, curvilinear bands parallel to the pleural surface; interlobular septal thickening, linear parenchymal opacities, 1-2 cm in length, perpendicular to and abutting the pleura; irregularity in interfaces of the pleural surfaces and fissures, ground-glass opacity, areas of increased parenchymal attenuation without distortion in bronchi and vessels; consolidation, areas of increased parenchymal attenuation with obscuration in bronchi and vessels and containing air bronchograms; mosaic pattern, patchy areas of decreased lung attenuation with a paucity of vascular markings; bronchial wall thickening, bronchial wall thickness greater than one sixth of the lumen diameter; bronchial dilatation, bronchus or bronchiole with a lumen diameter greater than the lumen of the accompanying artery; emphysema, areas with decreased lung attenuation without visible wall; honeycombing, interlacing cystic spaces with thickened wall; architectural distortions, displaced fissures and hilar structures or distorted secondary pulmonary lobules, bronchi, or vessels and apical fibrosis or apical fibrotic change distorting the pulmonary parenchyma. In addition to the above-mentioned changes, we also looked for pleural thickening, thoracic cage asymmetry and tracheal dilatation. A scoring system was applied to all abnormal findings (grade 1, 2 and 3). The described lesions were classified as; grade I if they were unilateral and had a single localization, grade II if they were unilateral and had multiple localizations and grade III if they were bilateral.

All statistical analyses were performed using a personal computer and SPSS software. Descriptive data are shown as mean ± SD for continuous variables and are shown as frequencies and percentages for categorical variables.

In detailed HRCT evaluations, lung parenchymal changes were found in 46 (59%) of 78 patients. The most common findings were parenchymal bands, interlobular septal thickening and emphysema. Parenchymal bands were detected in 21 patients (27%) and interlobular septal thickening and emphysema in 9 (12%) patients. In addition, apical fibrosis was found in 8 (10%) patients; ground-glass opacities in 7 (9%); parenchymal micronodules in 5 (6%), irregularity of interfaces and fissures and bronchial dilatation in 3 (4%); mosaic pattern and pleural thickening in 2 (3%); subpleural bands, consolidation and bronchial wall thickening in 1 (1%) patient (Figure 1). The distribution and grades of lung parenchymal changes are shown in Table 2. Tracheal dilation, asymmetry of thoracic cage, honeycomb appearance and structural distortion were not detected and are normally sought as evaluation criteria. In addition, subsegmental atelectasis and a cavitary lesion were detected in two and one case, respectively. 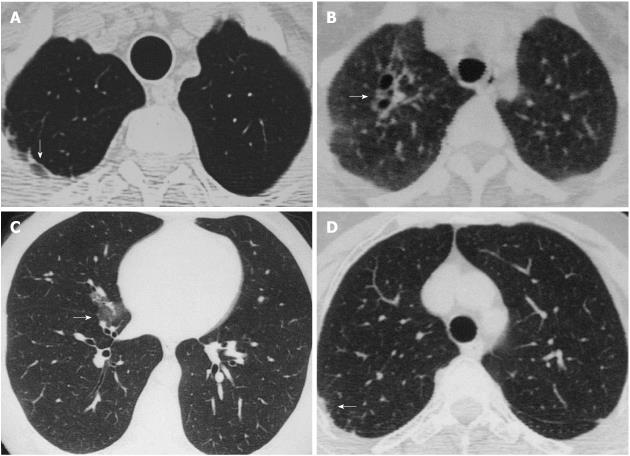 AS is a chronic inflammatory multisystem disease with an unknown etiology. Genetic cell marker, HLA-B27, positivity is reported in 75%-96% of patients. AS mainly affects the axial skeleton[1,2]. The most commonly affected area is the sacroiliac joint[16]. In later stages of the disease, low back, thorax and neck involvement occur. More rarely, eye, kidney, lung and heart involvement may also occur[9].

Pleuroparenchymal involvement is rare, is usually asymptomatic and seen in later stages of the disease[1,2]. Common findings are; apical fibrosis, parenchymal bands, septal thickening, emphysema and pleural thickening, other findings include upper lobe fibrobullous disease, interstitial lung disease, pleural effusion and mycetoma formation[1,2,6]. Upper lobe cavitary lesions are late complications secondary to fungal and mycobacterial infections[17,18]. A lower incidence of empyema, pneumothorax and cor pulmonale have been reported[6]. Lung involvement is reported to be 40%-85% in HRCT studies[1,2,5-13]. Rosenow et al[3] evaluated lung radiographs of 2080 AS patients and reported apical fibrosis in 26 patients, pulmonary aspergilloma in 5, pleural effusion in 3, pneumothorax in 2 and cor pulmonale in 1 patient giving a total of 37 (1.3%) patients. In 2003, Senocak et al[2] evaluated 20 AS patients who were diagnosed according to the New York Criteria, who did not have tuberculosis, hospitalization due to pneumonia or long-term drug use history. They divided the patients into 3 groups as follows; 0-5, 6-10 and over 11 years according to disease course. The first group had 2 (50%) patients, the second group had 4 (100%) and the third group had 11 (92%) patients with abnormal HRCT findings. Average HRCT findings were found in 85% of patients. Emphysema was reported in 9, septal thickening in 9, nodules in 8, subpleural bands in 7, pleural thickening in 4 and apical fibrosis in 3 patients, out of 20. In the same year, Kiris et al[1] studied 28 previously diagnosed AS patients. Smoking was used as a criterion for differential diagnosis in this study. In the smoking group which was composed of 9 cases, 67% had abnormal HRCT findings. In addition, 63% of cases in the non-smoking group (the non-smoking group was composed of 19 cases) had abnormal findings on HRCT scan. However, in a comparison of these 2 groups, there was no statistically significant difference. In 2004, Altin et al[8] divided 38 patients into 2 groups, in one group the disease course was less than 10 years and in the remaining group the disease course was higher than 10 years. They found abnormal HRCT findings in 27 (73%) patients. 80% of the over-10-years-of-disease-course group showed abnormal HRCT findings; and 61.1% of the other group showed abnormal HRCT findings. El Maghraoui et al[9] detected abnormal HRCT findings in 29 (52.7%) patients, but detected abnormal X-ray findings in only 2 (4%) of those 29 patients among 52 AS patients in their study. The most common findings reported were interstitial lung disease in 4 (8%) patients, apical fibrosis in 5 (20%), emphysema in 5 (20%), bronchiectasis in 4 (8%), and ground-glass appearance in 2 (4%) patients. In 2005, Ayhan-Ardic et al[11] evaluated HRCT examinations in 20 rheumatoid arthritis (RA) patients, 20 AS patients, and 20 healthy subjects. The results showed that 14 (70%) of RA patients, 10 (50%) of AS patients and 1 (5%) of the healthy subjects showed abnormal HRCT findings. In 2007, Sampaio-Barros et al[13] detected abnormal HRCT findings in 21 (40%) of 52 asymptomatic AS patients. The most common finding was nonspecific linear parenchymal opacities in 19% of patients. Other findings were lymphadenopathy in 12%, emphysema in 10%, and pleural involvement in 8%. In a recent study, Ozdemir et al[14] detected abnormal HRCT findings in 14 (70%) of 20 AS patients. In this study, they divided the patients into two groups according to disease of more than 10 years or disease of less than 10 years. In the group with disease of less than 10 years, the percentage of abnormal HRCT findings was 40%, but in the group with disease of more than 10 years this value was 80%. In a comparison of these two groups, the difference between the groups was statistically significant. On the other hand, there was no signiﬁcant difference in the presence of HRCT abnormalities between current smokers and non-smokers.

HRCT shows minor changes much earlier than chest X-ray according to the literature. If we compare patients with early stage and long-term AS, the rate of abnormal findings increases with increased duration of AS. Our study had the highest patient number of all studies evaluating lung parenchymal changes in AS. Parenchymal involvement was detected in 59% of our patients. The most common findings were parenchymal bands in 27%, interlobular septal thickening in 12%, emphysema in 12%, apical fibrosis in 10%, and ground-glass opacities in 9% of patients. The two most important limitations of our study are non-comparability with healthy subjects and non-correlativity of changes in the long-term follow-up.

In conclusion, HRCT shows minor changes in the lung much earlier than chest X-ray. Our study had the highest number of AS cases of all previous studies evaluating lung changes. In the present study, the rate of lung parenchymal changes was slightly lower than that in recent literature. We think that this is because our patient group had short disease duration. The lung parenchymal changes which occur in AS patients must be compared with healthy control groups.

Ankylosing spondylitis (AS) is a chronic inflammatory disease which affects the axial skeleton. Lung parenchymal involvement is reported in different studies with a small number of cases, ranging in frequency ratios.

The two most important limitations of the study are non-comparability with healthy subjects and non-correlativity of changes in the long-term follow-up.

High resolution computed tomography (HRCT) shows minor changes in lung much earlier than chest X-ray. This study had the highest number of AS cases of all previous studies evaluating lung changes. In the present study, the rate of lung parenchymal changes was slightly lower than that in literature.

HRCT shows minor changes much earlier than chest X-ray according to the literature. When early stage and long-term AS patients were compared, the rate of abnormal findings increases with increased duration of AS. The most common findings were parenchymal bands in 27%, interlobular septal thickening in 12%, emphysema in 12%, apical fibrosis in 10%, and ground-glass opacities in 9% of patients.

In this manuscript, the authors reported that HRCT was useful to evaluate early lung parenchymal changes in patients with AS. This topic is interesting; however, some revisions are needed to improve the manuscript.