CONCLUSION: ARFI seems to be a useful method for the assessment of diffuse thyroid gland pathology.

Clinical evaluation through thyroid palpation is the classical method for assessing this superficial gland. In the last years, elastography has been developed as a new dynamic technique that uses ultrasound waves for the evaluation of tissue stiffness. The principle of ultrasound elastography is that compression of the examined tissue induces less strain in hard tissues than in soft ones. The ultrasound probe manually or automatically produces an acoustic “push” pulse that generates shear-waves which propagate into the tissue. The propagation speed increases with fibrosis[1,2].

Recently, several studies have assessed the value of different types of elastography (transient elastography, real time elastography or acoustic radiation force impulse elastography) for the evaluation of liver stiffness in an attempt to replace liver biopsy. Elastographic methods are also used for the assessment of focal lesions or of diffuse pathologies (especially chronic hepatopathies)[3-8]. Many studies have proved these methods to be valuable, especially for the diagnosis of advanced fibrosis in diffuse liver diseases[7,9-14].

Considering the analogy of the two parenchymatous organs, liver and thyroid, we tried to assess whether ultrasound-based elastography by means of the acoustic radiation force impulse (ARFI) technique could be useful for the evaluation of thyroid diffuse pathology.

The diagnosis of GD was based on the following criteria: thyrotoxicosis at the beginning confirmed by low thyroid stimulating hormone (TSH), high FT4 and FT3; diffuse hypoechoic goiter on ultrasound; and high titers of anti-TSH receptor antibodies. Some of the cases were evaluated by ARFI at the onset of the disease and some while under antithyroid therapy.

The diagnosis of CAT was based on high titers of antithyroid antibodies (anti-TPO and/or antiTg); diffuse hypoechogenity of the thyroid parenchyma on ultrasound; and normal or low thyroid function. Some of the cases had goiters (Hashimoto type) and some had a normal thyroid volume on ultrasound examination. All amiodarone treated patients developed type II thyrotoxicosis, diagnosed by means of established criteria[15].

ARFI elastography was performed with a Siemens Acuson S2000™ ultrasound system. In all patients, 10 elastographic measurements were taken in the right thyroid lobe (RTL) and 10 in the left thyroid lobe (LTL) using a convex probe of 1-4.5 MHz. Median values were calculated and expressed in meters/second (m/s) (Figure 1). 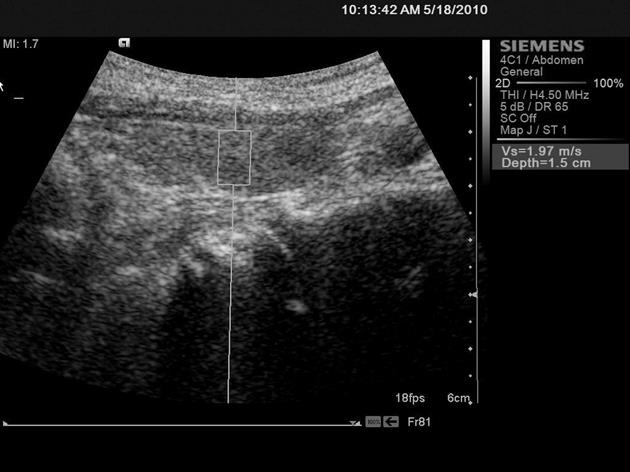 Data obtained from our cases were collected in a Microsoft Excel file, the statistical analysis being performed using the MedCalc program. ARFI measurements were numeric variables, so the mean values and standard deviation were calculated. The t test was used to compare mean ARFI values of TS.

The diagnostic performance of ARFI elastography was assessed using ROC curves that were constructed for prediction of thyroid pathology. Optimal cut-off values were chosen to maximize the sum of sensitivity (Se) and specificity (Sp). Se and Sp were calculated according to standard methods.

The mean TS values assessed by ARFI in normal and pathologic thyroid for the LTL and RTL, and the median values for LTL plus RTL are presented in Table 1. 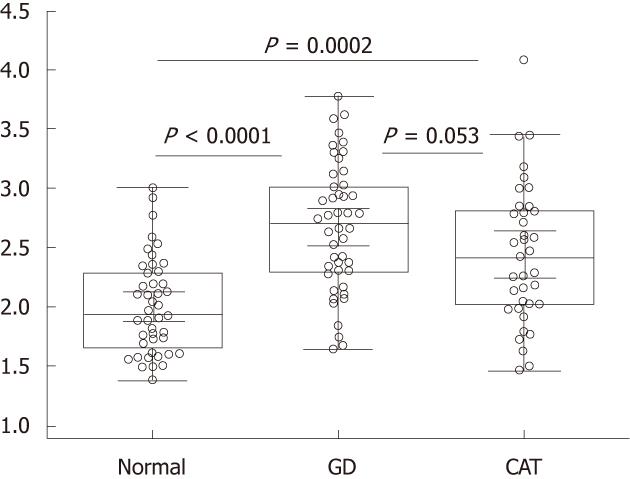 If we compared mean TS values obtained by convex vs linear probe, those obtained with the convex one were slightly higher, but not significantly so, than those obtained with the linear one (2.17 ± 0.51 m/s vs 2.04 ± 0.43 m/s, P = 0.19) (Table 2). Also, if only 5 ARFI measurements were performed in each thyroid lobe, their median values were not significantly different from the median values of 10 ARFI measurements (Table 2), in normal as well as in diffuse thyroid disease. 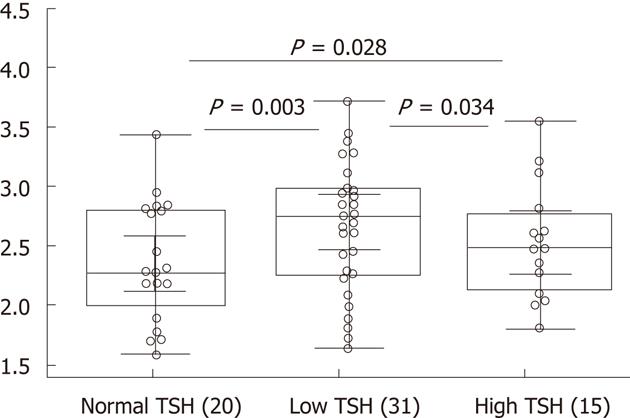 GD is an autoimmune thyroid disorder characterized by diffuse goiter, thyrotoxicosis, orbitopathy and occasionally, infiltrative dermopathy. The clinical exam of the goiter by palpation reveals a parenchymatous elastic consistency and a specific bruit. CAT is another autoimmune thyroid disease that can induce goiter and/or thyroid dysfunction. Thyroid function is normal, low or rarely high. The classic form of CAT (Hashimoto’s disease) presents a diffuse goiter with hard consistency at palpation. If GD is characterized by circulating anti-TSH immunoglobulins, CAT expresses serum antithyroid autoantibodies which, in time, damage the thyroid’s morphofunctionality.

In previously published papers, thyroid elastography has been used to evaluate thyroid nodule stiffness in order to differentiate malignant from benign ones[16-22], usually using real time elastography (Hi RT-E). There is only one published study (also by our group) that evaluated thyroid stiffness by means of ARFI elastography in a group of 74 subjects, as a predictor of diffuse thyroid pathology[23].

ARFI elastography involves targeting an anatomical region to be investigated for elastic properties with the use of an ROI cursor, while performing real-time B-mode imaging. Tissue in the ROI area is mechanically excited using short-duration (262 μs) acoustic pulses with a fixed transmit frequency of 2.67 MHz to generate localized tissue displacement. The displacement results in shear wave propagation away from the region of excitation and is tracked using ultrasound correlation-based methods[1,2]. The shear wave propagation velocity is proportional to the square root of tissue elasticity so that the propagation speed increases with fibrosis. Using image-based localization and a proprietary implementation of ARFI technology, shear wave speed may be quantified. Results are expressed in m/s. Measurement value and depth are also reported.

Considering that there are no manufacturer recommendations for TS evaluation, we performed 10 ARFI measurements in each thyroid lobe, after which a median value was calculated, similar to the evaluation of liver stiffness by means of transient elastography (TE) or ARFI. Thereafter, we retrospectively analyzed the results, when only the first 5 ARFI measurements were taken into consideration. TS values assessed by means of ARFI were not statistically significant different if 10 vs 5 ARFI measurements were performed in each thyroid lobe (Table 2), so that we can conclude that for TS assessment 5 measurements are enough.

In the practical evaluation of liver stiffness through elastographic methods (TE or ARFI), the high level of aminotransferases modifies the values obtained for liver stiffness[24-26]. For this reason, we wanted to see if a modified thyroid function plays a role in the TS evaluation. We found that ARFI values were not correlated with TSH: Spearman r coefficient = -0.157, P = 0.20. Considering all the patients with thyroid pathology, the mean ARFI values were significantly higher in patients with abnormal TSH, as compared with those with normal TSH (Table 3).

Other elastographic methods have been used for TS assessment. In such a study, Bahn et al[27] used magnetic resonance elastography (MRE) to evaluate TS in cases without thyroid pathology (12 subjects), in patients with Hashimoto thyroiditis (5 subjects), in patients with benign thyroid nodules (8 subjects) and with malignant thyroid nodules (2 subjects). Statistically significant differences were found between TS values in normal subjects (1.9 ± 0.6 kPa at 100 Hz and 1.3 ± 0.5 kPa at 80 Hz) and those with Hashimoto thyroiditis (2.8 ± 0.6 kPa at 100 Hz and 1.8 ± 0.6 kPa at 80 Hz) (P = 0.004 at 100 Hz). In the same MRE study, elastographic parameters could not differentiate benign from malignant thyroid nodules in this small cohort of patients.

In our study, TS assessed by means of ARFI in healthy subjects was significantly lower than in GD (P < 0.0001) and CAT patients (P = 0.0002), but the differences were not statistically significant between GD vs CAT patients (P = 0.053), meaning that even if we cannot differentiate by means of ARFI patients with GD from those with CAT, ARFI elastography could be used in clinical practice for differentiating normal thyroid from diffuse disease of the thyroid, maybe even as a first-line method, immediately after performing routine ultrasound examination of the gland.

ARFI elastography of the thyroid is feasible with either linear or convex probes and 5 measurements in every lobe are enough (median values) for an accurate assessment. ARFI evaluation seems to be a useful method for predicting the presence of autoimmune diffuse thyroid pathology, with high Sp and PPV (> 90%) for cut-off values > 2.53 m/s; being able to make a first differentiation between a normal thyroid and diffuse thyroid diseases immediately after ultrasound evaluation, thus opening a new field in thyroid elastography.

Elastographic methods are non-invasive means used for liver fibrosis evaluation. There is very limited knowledge regarding the use of elastography for diffuse thyroid pathology assessment. Considering the analogy of the two parenchymatous organs, liver and thyroid, authors tried to assess whether ultrasound-based elastography, by means of the acoustic radiation force impulse (ARFI) technique, could be useful for the evaluation of thyroid diffuse pathology.

ARFI elastography is a new method, based on ultrasound, used for the evaluation of tissue stiffness. In this study, the authors measured mean thyroid stiffness values assessed by ARFI elastography in healthy subjects vs patients with thyroid pathology. In the study, for a cut-off value > 2.36 m/s, thyroid stiffness assessed by ARFI elastography was accurate enough to predict the presence of diffuse thyroid pathology (AUROC = 0.804). For a cut-off value > 2.53 m/s, the specificity and positive predictive value were higher than 90%.

This study supports the conclusion that thyroid ARFI evaluation seems to be a useful method for diffuse thyroid gland pathology assessment, as a first-line method immediately after ultrasound evaluation.