The purpose of this essay was to illustrate the radiological and pathological findings in a wide spectrum of dural lesions mimicking meningiomas. Familiarity with and knowledge of these findings will narrow the differential diagnosis and provide guidance for patient management. In this pictorial review, we describe the following entities: Solitary fibrous tumors, hemangiopericytoma, gliosarcoma, leiomyosarcoma, dural metastases, Hodgkin’s disease, plasmocytoma, Rosai-Dorfman disease, neurosarcoidosis, melanocytic neoplasms and plasma cell granuloma.

On computed tomography (CT), the mass is most often hyperdense and contains some calcifications. The appearance on magnetic resonance imaging (MRI) is that of an extra-axial, dural-based mass predominantly isointense on T1- and T2-weighted images. Intra-lesional inhomogeneity with areas of hypointensity and hyperintensity, best described as having a patchy appearance, has been reported. In most cases, homogenous enhancement on post-contrast T1-weighted images is seen (Figure 1). Surgery is the treatment of choice. Stereotactic and external beam radiation therapy may be indicated for postsurgical tumor remnants and for unresectable recurrences[3]. 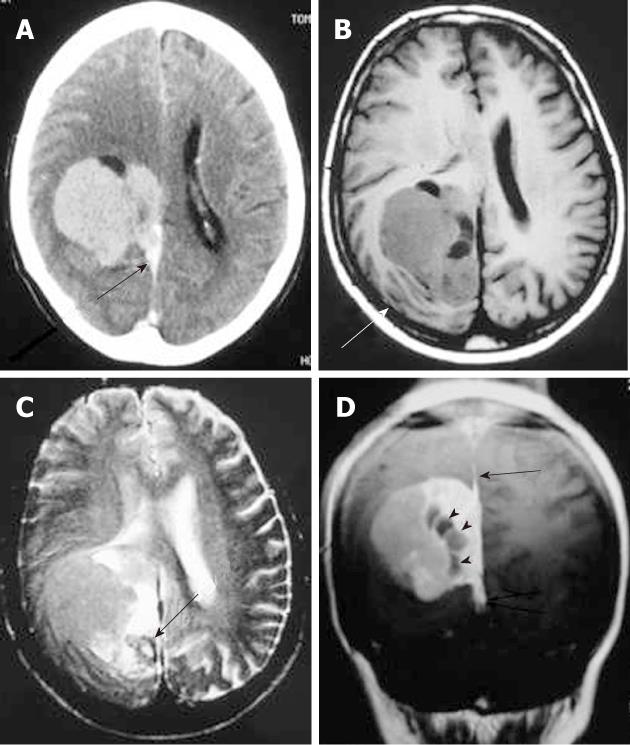 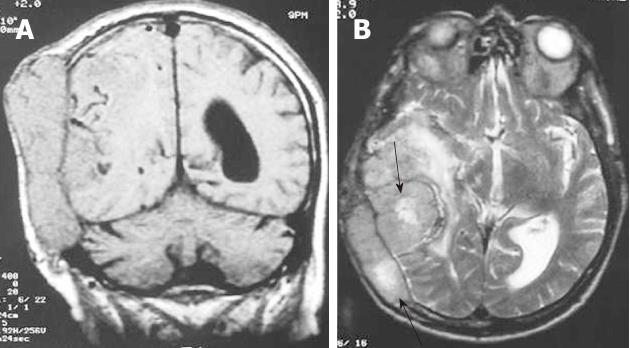 Gliosarcoma is a rare cerebral tumor closely related to glioblastoma in terms of both its clinical and therapeutic characteristics. Gliosarcoma consists of gliomatous and sarcomatous elements (Figure 3A)[8].

Figure 3 Gliosarcoma. A: Pathological image showing an area with features of osteogenic sarcoma (black asterisk) adjacent to the glial component of the tumor (white asterisk) (hematoxylin-eosin, original magnification × 100); B: On the axial, post-contrast T1-weighted magnetic resonance image, the tumor shows intense homogeneous enhancement. Note the close relation of the mass with the dura, which is enhanced in a way mimicking meningioma (arrow).

Gliosarcoma usually occurs in middle aged adults. The ability of gliosarcoma to metastasize to other locations in the neuroaxis is well known[9].

Radiation-induced gliosarcoma may appear at the site of a treated intracranial neoplasm and should be considered in the differential diagnosis of a recurrent mass[10].

On CT, gliosarcoma tends to present as a peripherally located, sharply defined, round or lobulated, isodense or hyperdense solid mass with heterogeneous or ring enhancement due to a fibrous component. On MRI, the tumors tend to be well-defined, demonstrating either an inhomogeneous or cystic appearance with surrounding vasogenic edema. On T2-weighted images, intermediate signal intensity with surrounding edema is visible. The signal intensity of the tumor is similar to gray matter but is hypointense relative to other glial neoplasms. Post-contrast T1-weighted images show intense tumor enhancement, often with a ring-like appearance (Figure 3B)[11]. Postsurgical treatment of gliosarcoma includes adjuvant radiotherapy with concurrent administration of temozolomide[12].

Leiomyosarcomas of the CNS are extremely rare; however, they are becoming more prevalent in immunocompromised patients. Patients with acquired immunodeficiency syndrome are known to exhibit an increased incidence of smooth muscle tumors associated with Epstein virus. Intracranial leiomyosarcoma reveals dural masses or a skull-base location. Leiomyosarcoma should be included in the differential diagnosis of extra-axial CNS lesions in human immunodeficiency virus (HIV)-infected patients[13].

Metastases to the dura constitute one of the least frequent patterns of neoplastic spread to the craniospinal axis. The neoplasms arise either by direct extension from skull metastases or by hematogeneous spread. Breast cancer, prostate cancer, adenocarcinoma of the lung, and renal cell carcinoma are the most common. Meningeal metastasis from medulloblastoma is also a well known entity[14]. Typically, these tumors produce MR images with increased signals on T2-weighted images, often with an enhancing dural tail mimicking a meningioma (Figure 4). Patients with a single resectable symptomatic dural metastasis, controlled systemic cancer, and acceptable surgical risk should be considered for resection as first-line therapy.

Intracranial Hodgkin’s disease occurs by direct spread from the bones of the skull or in continuity with meningeal deposits that gained access to the skull via the cranial nerves[15,16]. The involvement of bone in Hodgkin’s lymphomas usually occurs in the late stage of the disease. Extension of the scalp mass to both the epidural space and subcutaneous soft tissue is usually seen.

Regarding the histology of Hodgkin’s disease with intracranial relapse, both a nodular sclerosis and mixed cellularity variety have been described. In the majority of reported skull lymphomas, the mass is hyperdense on unenhanced CT and shows marked enhancement on post-contrast studies. Destruction of the bone may not be seen in some cases because the characteristic permeating growth pattern of lymphoma is a large soft tissue component and very little bone destruction. Bone window setting is useful for depicting tiny lytic lesions of the bony calvarium (Figure 5A and B).

Figure 5 Non-Hodgkin Lymphoma. The axial non-contrast computed tomography. A: A hyperdense extra-axial mass extending to both sides of the frontoparietal bone; B: Bone window setting depict lytic lesion of the calvarium (arrow); C: On axial T2-weighted magnetic resonance images, the mass appears isointense with peritumoral edema; D: After the administration of contrast media, a strong homogeneous enhancement is seen with a dural tail (arrows).

On MRI, the densely cellular deposits of lymphoma most often do not show high signal intensity on T2-weighted images and typically remain hypo- to isointense on all pulse sequences. Post-contrast T1-weighted images show either homogeneous or inhomogeneous dense enhancement. Linear dural enhancement is usually seen on both sides of the dural mass (dural tail) and, although it is an extra-axial mass, white matter edema is usually present (Figure 5C-D)[17]. Radiotherapy and chemotherapy are the treatment of choice.

Plasmocytoma rarely involve the CNS as dural-based lesions[18]. Careful systemic evaluation should be made in such a presentation to rule out multiple myeloma which would require different management and prognosis. Some patients develop bone marrow biopsy-proven myeloma within months of the initial diagnosis of CNS plasmocytoma[19]. Histopathological examination of the mass after excision shows multiple myeloma immunopositive for IgG, kappa light chain, and CD38 (Figure 6A). On CT, plasmacytomas are extra-axial masses without calcification or bone involvement, and they are usually high-density lesions. An isointense lesion is revealed on both T1- and T2-weighted images. On post-contrast T1-weighted images, intense homogeneous contrast enhancement is demonstrated with a dural tail sign mimicking meningioma (Figure 6B and C)[20]. Systemic chemotherapy and radiotherapy are recommended after surgical excision of the mass.

Rosai-Dorfman disease is also known as sinus histiocytosis with massive lymphadenopathy. The disease commonly presents as massive, painless, bilateral lymph node enlargement in the neck with fever. Rarely, sites other than the lymph nodes are involved, including the CNS, eyes, upper respiratory tract, skin, and head and neck region[21]. CNS Rosai-Dorfman most commonly involves patients between 20-40 years.

Symptoms of intracranial disease include seizures, headache and weakness. Over 90% of CNS Rosai-Dorfman cases involve the leptomeninges. Histopathologically, the dura is thickened, fibrotic, and contains a variable density of chronic inflammatory cells, dominated by lymphocytes and plasma cells. The finding of emperipolesis is characteristic of Rosai-Dorfman disease of the leptomeninges, but in 30% of cases this feature is not identified[22].

On CT and MRI, Rosai-Dorfman disease presents as dural-based, epidural or subdural, contrast-enhancing masses that often elicit vasogenic edema in the underlying cerebral cortex and white matter (Figure 7A and B). The dural mass shows low signal intensity on T2-weighted images. Thus, clinically and radiologically, the disease is thought to represent meningioma[23]. The definitive diagnosis of Rosai-Dorfman disease involving the leptomeninges is established by biopsy (Figure 7C) and pathological examination. Treatment should be based on clinical manifestations. Many lesions are asymptomatic, heal spontaneously, and do not require treatment[24].

A dural-based mass is one of the least common manifestations of neurosarcoidosis.

Lesions typically homogeneously enhance on contrast-enhanced T1-weighted images (Figure 8). Variable amounts of vasogenic edema can also be seen in the white matter adjacent to the mass[26,27]. Differential considerations include lymphoma and idiopathic hypertrophic cranial pachymeningitis. Steroid therapy is usually indicated. Infliximab is a valuable pharmacological agent in the management of patients with refractory and disabling neurosarcoidosis[28]. 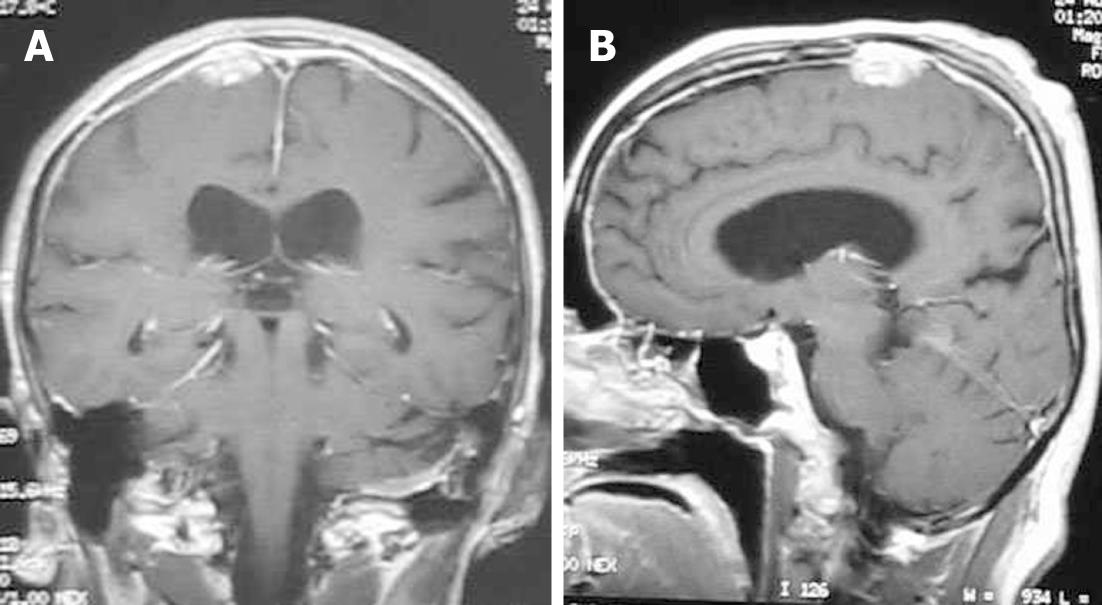 Figure 8 Neurosarcoidosis. Coronal (A) and sagittal (B) T1-weighted magnetic resonance post-contrast images show an enhancing dural-based lesion. Also, note the enhancement of the dura along the convexity.
MELANOCYTIC NEOPLASMS

Histologically, most melanocytomas are spindle cell neoplasms, although epithelioid cytology may dominate in some cases. Tumor cells grow in sheets, nests, or fascicles (Figure 9A).

On CT, primary melanocytic lesions appear as well-circumscribed, isoattenuating to hyperattenuating, extra-axial tumors with homogeneous enhancement. Even if there is no hyperostosis, the neoplasms can mimic meningioma[30]. MRI demonstrates variable signal intensity on T1- and T2-weighted images, in proportion to the amount of melanin within the tumor. Therefore, melanocytic neoplasms are isointense or hyperintense to adjacent normal brain tissue on T1-weighted images and isointense or hypointense on T2-weighted images. The neoplasms enhance after intravenous administration of contrast material (Figure 9B and C)[31]. Complete surgical excision of the tumor is the treatment of choice. The role and efficacy of radiotherapy and chemotherapy remain controversial.

Plasma cell granuloma is a rare form of idiopathic inflammatory pseudotumor often characterized by non-neoplastic proliferation of plasma cells clinically mimicking a neoplastic process. Pseudotumors of the CNS, however, are exceptional and rare. In reported cases, these reactive lesions occurred primarily in adults, usually presenting as discrete tumors arising from the leptomeninges or dura. Histologically, the granulomas are populated by a polytypic population of mature plasma cells, plasmatoids, and small non-transformed lymphocytes in a background of variable fibrosis, fibroblasts, and entrapped leptomeningeal cells (Figure 10A)[32].

On CT, the mass is usually a well-circumscribed area of increased density markedly enhanced with the administration of contrast. On MRI, the mass has slightly high signal intensity on T1-weighted images and marked low signal intensity on T2-weighted images. The granuloma is usually heterogeneously enhanced with gadolinium-DTPA (Figure 10B and C). Parenchymal involvement has been reported[33].

The differential diagnosis of dural-based lesions in the brain varies from incidental and benign to symptomatic and malignant lesions. The above mentioned entities involving the dura are rare and almost always diagnosed after tissue is obtained because of their clinical and radiographic similarity to meningiomas. These lesions can closely resemble meningiomas in terms of signal characteristics, enhancement pattern, and location. Imaging characteristics alone can be misleading; neuropathological support is essential for accurate diagnosis.

A thorough clinical evaluation can reveal likely diagnostic possibilities. In the presence of a heterogeneous dural-based mass with prominent internal vessels and bone erosion, the case of hemangiopericytoma should be considered. Leiomyosarcomas should be included in the differential diagnosis of dural-based lesions in HIV-infected patients.

Careful vigilance in patients with a history of cancer, presenting with new symptoms or imaging evidence of dural-based lesions, should raise the possibility of dural metastasis.

The diagnosis of lymphoma should be considered for lesions affecting the dura in high-risk immunocompromised patients. The presence of an apparent dural tail can be seen in a lymphoma. The absence of hyperostosis helps differentiate lymphoma from meningioma.

Hypercalcemia, hyperproteinemia, and serum gamma globulin peak in a patient with an extra-axial dural mass should raise the possibility of plasmocytoma. Rosai-Dorfman disease should be considered when a young adult with painless neck lymphadenopathy, fever and anemia presents with a dural mass. The already known history of systemic sarcoidosis in a patient with a dural mass and leptomeningeal enhancement is suggestive of neurosarcoidosis. Awareness that these lesions involve the dura may facilitate radiological and intra-operative recognition and, in some cases, preclude unnecessary additional surgery [34].