An earthquake that registered 8.0 on the Richter scale devastated the mountainous region of Sichuan in China at 2:28 pm Beijing time on May 12, 2008, and the epifocus was located at Wenchuan County in the Sichuan Province of China. The widespread effect of the earthquake destroyed a significant number of schools, factories, apartments, office areas, and villages. The schools, factories and villages were more vulnerable compared with the other styles of buildings. Due to the high-force impacts of building collapse or falling objects in this earthquake, 374 643 people were injured with 69 227 killed and 17 923 missing. In view of the massive morbidity arising from this event, an undamaged key university hospital 92 kilometers away from the epicenter, equipped with 4300 beds, working as the largest-scale urgent care center in the earthquake-affected areas, received the largest number of injured people, and treated a total of 2728 cases over a period of 15 d. Of these patients, 2.05% (56/2728) had sustained abdominal injury associated with crush injury. Missed abdominal injury or delayed treatment frequently results in preventable mortality, but prompt localization of abdominal injuries in trauma patients can improve the efficacy of injury management[1,2].

To localize suspected blunt abdominal injury, ultrasound is used as an initial tool in most European and Asian-Pacific countries[3]. However, ultrasonography is not sensitive in detecting hollow organ and retroperitoneal injury[4]. Computed tomography (CT) scanning of the abdomen can overcome the limitation of ultrasonography, and is currently considered the gold standard for detecting intra- and retroperitoneal lesions in trauma patients[5-8]. To our knowledge, the features of abdominal crush injuries on CT due to massive earthquake damage have not been reported in the literature, although some relevant publications regarding crush injuries in other anatomic regions have been reported[9-12]. Thus, our aim was to retrospectively investigate the features of abdominal crush injuries resulting from this earthquake using emergency multidetector CT (MDCT) for better understanding and treatment planning of abdominal crush trauma survivors in similar future earthquakes.

The local institutional ethic review board approved the present study, and patient informed consent was waived. Patients entered our study according to the following inclusion criteria: (1) victims had abdominal crush injuries in combination with or without injuries in other systems such as the thorax and pelvis; (2) clinical suggested abdominal injuries were initially confirmed by CT; and (3) the etiology of abdominal injuries was crush injury in the 2008 Sichuan earthquake on the basis of the history and the findings of rescue. Patients with abdominal injuries were excluded from the present study if the etiology of the injuries was jumping or accidental falling from buildings based on the history of injury.

Between May 12 and May 26, 2008, fifty-one consecutive survivors (22 men and 29 women; mean age, 41.92 years; age range, 7-86 years) with abdominal crush injuries resulting from the 2008 Sichuan earthquake, who were admitted into this university hospital and met the inclusion criteria, were enrolled in the present study. In the cohort, 49 patients with abdominal crush injuries in combination with crush injuries in one or more other anatomic regions including the thorax, pelvis, extremity and neck were confirmed by MDCT scans in 39, 40, 11 and 4 patients, respectively. In addition, 36 patients including 27 patients with retro- or intraperitoneal visceral injuries had acute renal failure confirmed by the measurement of myoglobin in blood and urine shortly after the CT scans. In order to timely detect the injuries for appropriate emergency treatments in a great number of injured patients, two of five MDCT scanners in the university hospital were utilized to image the abdominal injuries as soon as possible. The mean time from injury to imaging was 5.4 d with a range of 6 h to 14 d. In patients who waited a long time from injury to rescue, few dangerously ill patients survived before being conveyed to the university hospital to receive effective treatments, although some had received antibiotics in the field hospital to prevent infection in the disaster areas. Based on the image findings and clinical data, 37 patients with retro- or intraperitoneal visceral injuries, fracture of lumber vertebra, or severe injury of abdominal wall soft tissue underwent surgery, and the remaining victims received conservative treatment. Owing to appropriate treatments, 49 patients were cured, and 2 patients died of fatal crush injury.

Thirty-eight and thirteen victims with abdominal crush injuries underwent CT scanning with a Philips Brilliance 16-row MDCT (Philips Healthcare, Eindhoven, the Netherlands) and a Siemens Somatom Sensation 16-row MDCT (Siemens Medical Systems, Forchheim, Germany), respectively. An emergency abdominal CT scan without intravenous contrast material was obtained as soon as possible from the right diaphragmatic dome to the pelvic basement. Because we suspected all victims to have abdominal injuries in combination with acute renal failure due to the massive earthquake, the patients did not undergo contrast-enhanced abdominal CT scans in the earthquake situation. The following scanning parameters were used for both scanners to image the injuries: 120 kV, 250 mAs, 0.5-s gantry rotation time, pitch of 0.85, collimation of 16 mm × 0.75 mm, 5-mm reconstructed section thickness, 380-mm field of view, and matrix of 512 mm × 512 mm. When fractures of the lumbar vertebrae were found, the reconstructed section thickness was 1 mm.

Image data were transferred to a picture archiving communication system (Syngo-Imaging, Siemens Medical Solutions, Forchheim, Germany). Data were retrospectively analyzed by an experienced radiological Associate Professor (the first author, who had 12 years of experience in radiology) and one experienced radiologist (the third author with 11 years of experience in radiology) working in consensus with emphasis on trauma in anatomic regions including the retroperitoneum, intraperitoneal space, lumbar vertebrae, and abdominal wall soft tissue. Because of lumbar vertebral fractures related to pathological changes in abdominal wall soft tissue, the fractures were reviewed in detail by multiplanar reconstruction with a slab of 5-7 mm and three-dimensional reconstruction. In order to better understand overall types of abdominal injuries, traumatic lesions in parenchymal organs together with peritoneal pathological changes (seroperitoneum and pneumoperitoneum) and injuries of abdominal aorta were reviewed. 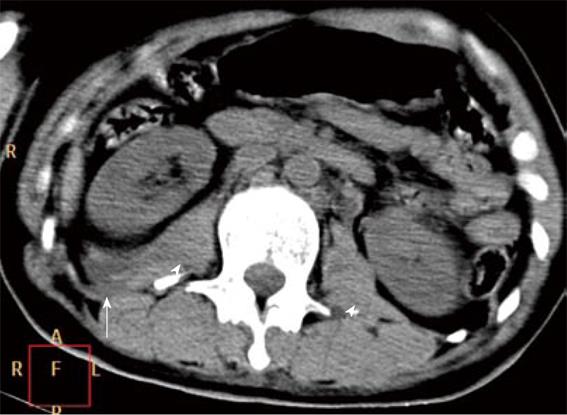 Figure 1 In a 41-year-old woman with crush fractures of the transverse process of lumbar vertebrae, the fractures were in combination with a right perirenal hematoma (arrow) and swelling of bilateral psoas muscles (arrowheads). 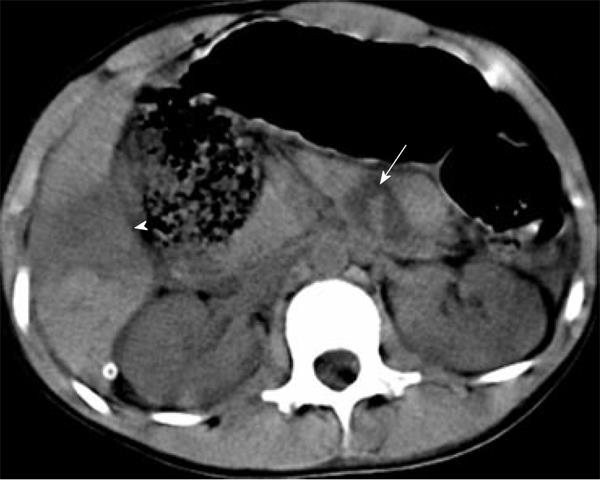 Figure 2 Computed tomography scan obtained at the level of the renal hilum in a 13-year-old girl with crush abdominal injuries demonstrates pancreatic rupture (arrow) and hepatorrhexis (arrowhead) with hematoma.

During the past 20 years, natural disasters have claimed more than three million lives worldwide[13]. With respect to loss of life, an earthquake is the most harmful disaster among all types of natural disasters[14]. In the 2008 Sichuan earthquake, 374 643 people were injured. Based on the patients presenting in the university hospital, abdominal crush injuries were one type of injury which occurred in 2.05% (56 of 2728), which was higher than the morbidity (1%) in the 2005 Kashmir earthquake[15]. Based on the largest number of injured people treated in the hospital in the earthquake-affected area, we proposed that the CT features of abdominal crush injuries might be helpful in better understanding and treatment planning of survivors with abdominal crush injuries in similar future earthquakes.

As an emergency imaging tool for diagnosing abdominal crush injuries, MDCT helps to image the injuries as soon as possible in a great number of injured patients due to an increased speed of image acquisition, and significantly reduces the time requirements for initial diagnostic evaluation[16]. We, therefore, focused on the emergency assessment of abdominal injuries using 16-row MDCT scanners in this earthquake setting. Because of the suspicion of acute renal failure associated with crush syndrome in the massive earthquake, use of iodinated contrast might presumably potentiate the development of renal failure in some patients, and the emergency CT scans of the abdomen were performed without intravenous contrast material.

Clinically, we found that fractures of lumbar vertebrae and injury of abdominal wall soft tissue were more often seen than retro- and intraperitoneal injuries, which may be explained by the fact that some victims with retro- and intraperitoneal injuries may have died before a rescue could be carried out, whereas most victims with fractures of lumbar vertebrae or injury of abdominal wall soft tissue survived long enough to be transported to the hospital to receive effective treatments.

As for retroperitoneal parenchymal injuries in the massive earthquake, renal and perirenal injuries were more often seen than injuries to other organs in the retroperitoneal space. According to Sever et al[18], the renal victims were of vital importance since they could predict the final outcome as well as be directive for medical therapies. We presumed that the CT findings could help us to better understand renal injuries from the earthquake for effective treatments to improve therapeutic outcome.

As for intraperitoneal parenchymal injuries arising from this earthquake, they were composed of liver and splenic injuries. Liver injuries were more often seen than injuries of any other parenchymal viscera. In addition, seroperitoneum occurred frequently in patients with abdominal crush injury. Full thickness bowel disruption was not represented in the population under study, which may be explained by the fact that victims with lethal injuries died before a rescue was carried out.

There were two inevitable limitations in our study. Firstly, contrast-enhanced abdominal CT scanning could not be performed in the earthquake situation due to suspicion of acute renal failure associated with crush syndrome, however, these non-enhanced CT scans could still image the injury patterns as illustrated in the present study. Secondly, this university hospital was 92 kilometers away from the epicenter, which could cause selection bias in the sampling of patients. Despite the limitations, this study illustrates the features of abdominal crush injury in survivors using MDCT focusing on the predominant anatomic distributions, which may be helpful in better understanding abdominal crush injury resulting from another earthquake to provide effective treatments.

In the 2008 Sichuan earthquake, some patients sustained abdominal trauma associated with crush injury. Computed tomography (CT) scanning of the abdomen is currently considered the gold standard for detecting intra- and retroperitoneal lesions in trauma patients. However, the CT features of crush abdominal trauma in an earthquake have not been reported in the literature in detail.

In this manuscript, the authors described the features of abdominal crush injuries in an earthquake, which is interesting.