Appendicitis is the most common acute surgical emergency of childhood. Since the original report by Puylaert in 1986, the use of ultrasonography in the diagnosis of appendicitis has been the subject of considerable study. Among the reported diagnostic criteria, the maximal outer diameter (MOD) of the appendix is accepted as the one of the most reliable criteria used to differentiate between a normal appendix and acute appendicitis. However, MOD measurement is subject to inaccuracies because luminal distention by non-compressible, non-inflammatory material such as fecal material, or increased maximal mural thickness due to reactive mucosal lymphoid hyperplasia, or a medical cause due to a generalized gastrointestinal disease, such as Crohn’s disease, can cause the measurement to exceed the upper limits of normality. The aim of this article is to introduce the spectrum of ultrasonographic findings in the normal and abnormal appendix and eventually to reduce unnecessary surgery in children.

The appendix is a small organ. However, to clinicians and radiologists, it is a very important organ because acute appendicitis is the most common form of acute abdomen that requires surgery in children. Many clinicians deliberate on the decision to operate following clinical suspicion of acute appendicitis.

The quoted negative appendectomy rate was 15% to 25%, but could be as high as 40% in female patients because many gynecological conditions such as dysmenorrhea and ovarian cyst complications can masquerade as acute appendicitis[1-4].

The appendix is a worm-like extension of the cecum and, for this reason, has been called the vermiform appendix. The average length of the appendix is 8-10 cm (range 2-20 cm). The normal appendix consists of 5 distinct layers; the inner most echogenic layer which represents the interface of mucosa and lumen, the hypoechoic mucosal layer, the echogenic submucosal layer, the hypoechoic muscularis propria layer and the outermost echogenic serosal layer. The typical normal appendix in children has an inner hypoechoic band without folding (Figure 1), and this feature is a distinguishable finding from other bowel structures. Therefore, recognition of this finding reduces the time and effort involved in identifying normal appendix and confidently excluding acute appendicitis[6,7]. This inner hypoechoic band corresponds to the mucosal layer with abundant lymphoid tissue on histologic examination[6] and disappears with aging[8]. 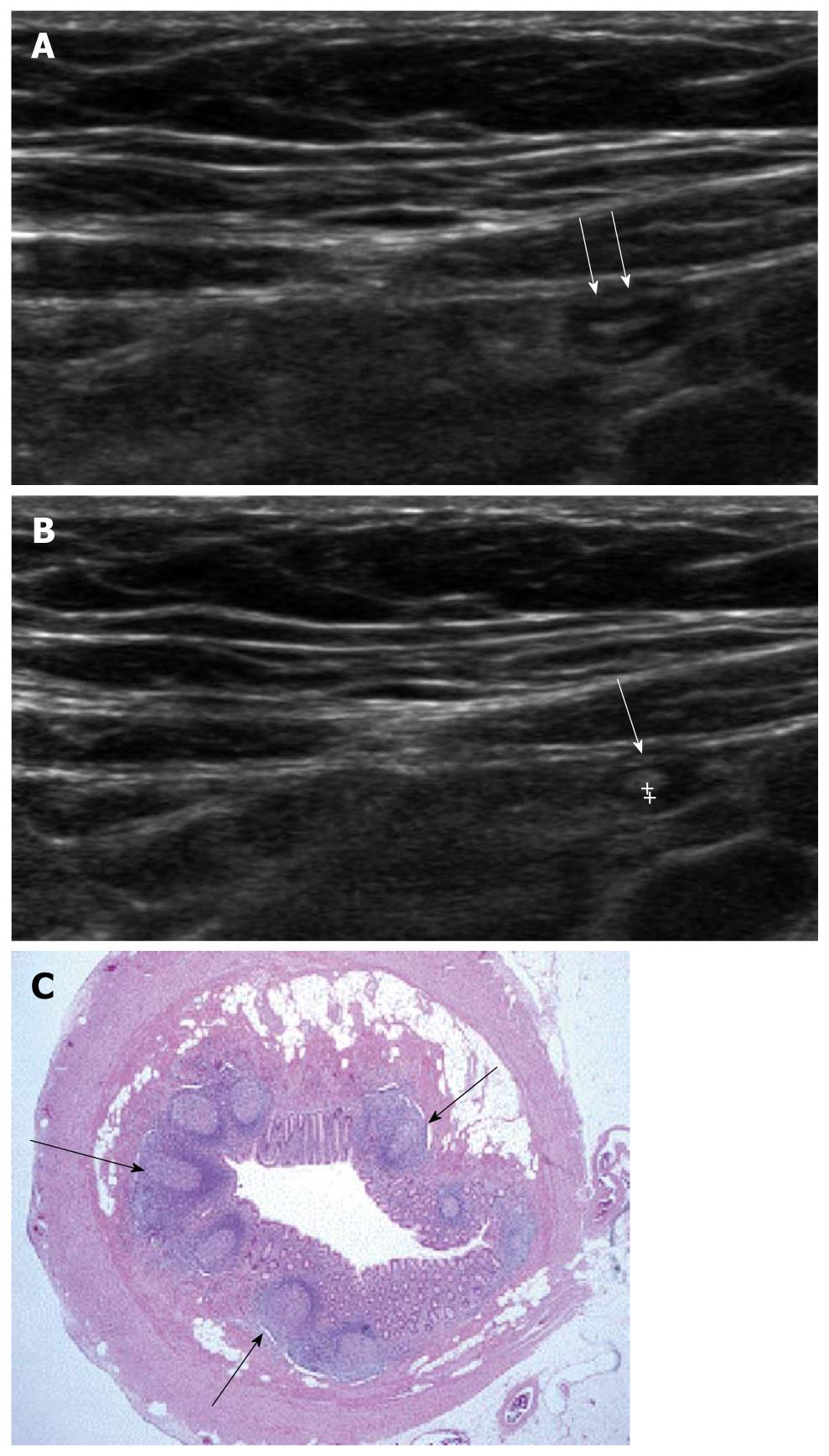 Figure 1 Ultrasonographic and histologic findings of normal appendix. A: Normal appendix (arrows) with thin inner hypoechoic band was seen on high frequency ultrasonography; B: The thickness of the inner hypoechoic band (cursors) of appendix (arrow) was measured as 0.5 mm; C: Low-magnification view of a cross section of the appendix. The inner wall of the appendix is lined by a layer of surface epithelium. The remainder of the mucosa (crypts, surrounding lamina propria, and the inconspicuous muscularis mucosae) surrounds this surface epithelial layer. The characteristic lymphoid nodules (arrows) within the lamina propria were found (× 20, H-E stain).

Normal appendix is a compressible tubular structure with a blind end. It is generally accepted that normal appendix does not exceed 6 mm in maximal outer diameter (MOD), which is the most important diagnostic criterion to exclude acute appendicitis. However, the MOD may be exaggerated by the presence of intraluminal materials such as gas, feces and non-inflamed fluid. To decrease the false positive rate of this MOD criterion, some radiologists recently tried to determine another size criterion, the maximal mural thickness (MMT) of the appendix[9-12]. Simonovský[9] reported that the differences in the normal appendiceal MMT between groups of young children, adolescents and adults were marginally significant. In addition, a MMT < 3 mm should be regarded as normal in children less than 6 years old.

Viral gastroenteritis produces lymphoid hyperplasia in the ileocecal valve region and appendix, altering the intestinal motility and leading to intussusception[13]. Mucosal lymphoid hyperplasia of the appendix is seen as a discernable hypoechoic band without folding in the inner-most layer of the appendix. Although this finding is seen in the normal appendix of children, in conditions of viral gastroenteritis, mesenteric lymphadenitis colitis or other inflammatory conditions, this hypoechoic band becomes thickened and prominent (Figure 2) when compared with that of normal appendix. In one series, the mean thickness of the inner hypoechoic band was measured as 0.80 mm in mesenteric lymphadenitis and 0.74 mm in viral gastroenteritis[6]. 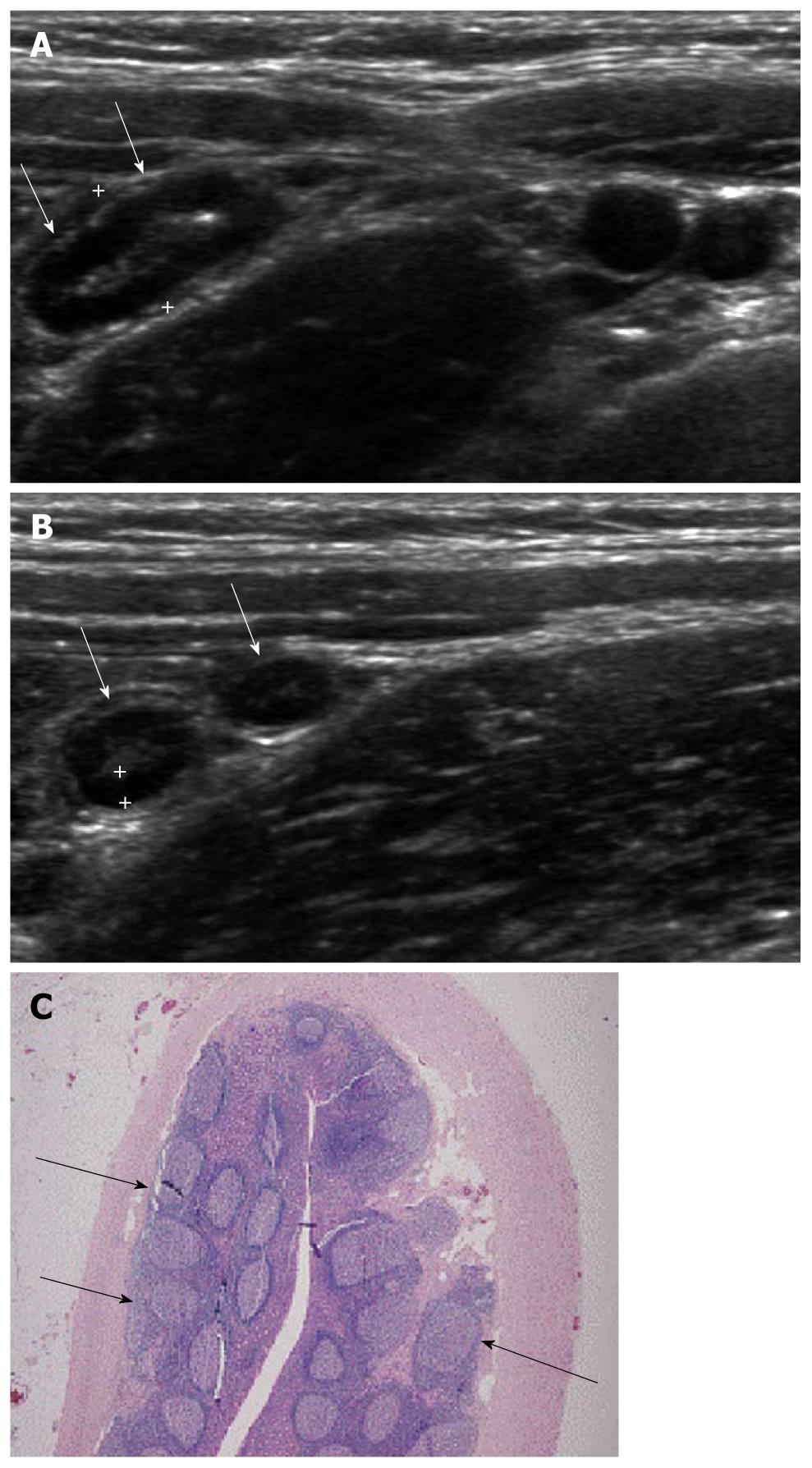 Figure 2 Ultrasonographic and histologic findings of mucosal lymphoid hyperplasia of the appendix. A: Normal appendix with thick inner hypoechoic band was seen (arrows). The maximal outer diameter was measured as 7.3 mm; B: The thickness of the inner hypoechoic band (cursors) of the appendix (arrows) was measured as 1.4 mm; C: Prominent lymphoid follicles (arrows) were found (× 20, H-E stain).

Mucosal lymphoid hyperplasia results in an increase in MMT of the appendix, which may lead to the misdiagnosis of acute appendicitis. However, in most cases, we can differentiate it from acute appendicitis by the points of smooth and even hypoechoic band, no demonstrable intraluminal exudates, absence of periappendiceal fat infiltration and absence of blood flow in thickened appendiceal wall[6].

Fecal material within the appendiceal lumen was characterized as a heterogeneous mild hyperechoic mass without demonstrable posterior shadowing on ultrasonography[11,14]. The absence of strong hyperechogenicity and posterior shadowing is a distinguishable finding from appendicolith. Fecal material may be present in whole lumen, focal or in a skipped pattern. Fecal impaction of the appendix increases the MOD, frequently leading to a misdiagnosis of acute appendicitis. However, in the fecal impacted appendix, recognition of the sonographic findings of intraluminal fecal material, preservation of the normal wall layering, smaller MOD, thinner MMT, the absence of periappendiceal mesenteric infiltration and no demonstrable increase in blood flow in the appendiceal wall (Figure 3A and B) is helpful in preventing unnecessary surgery[11]. 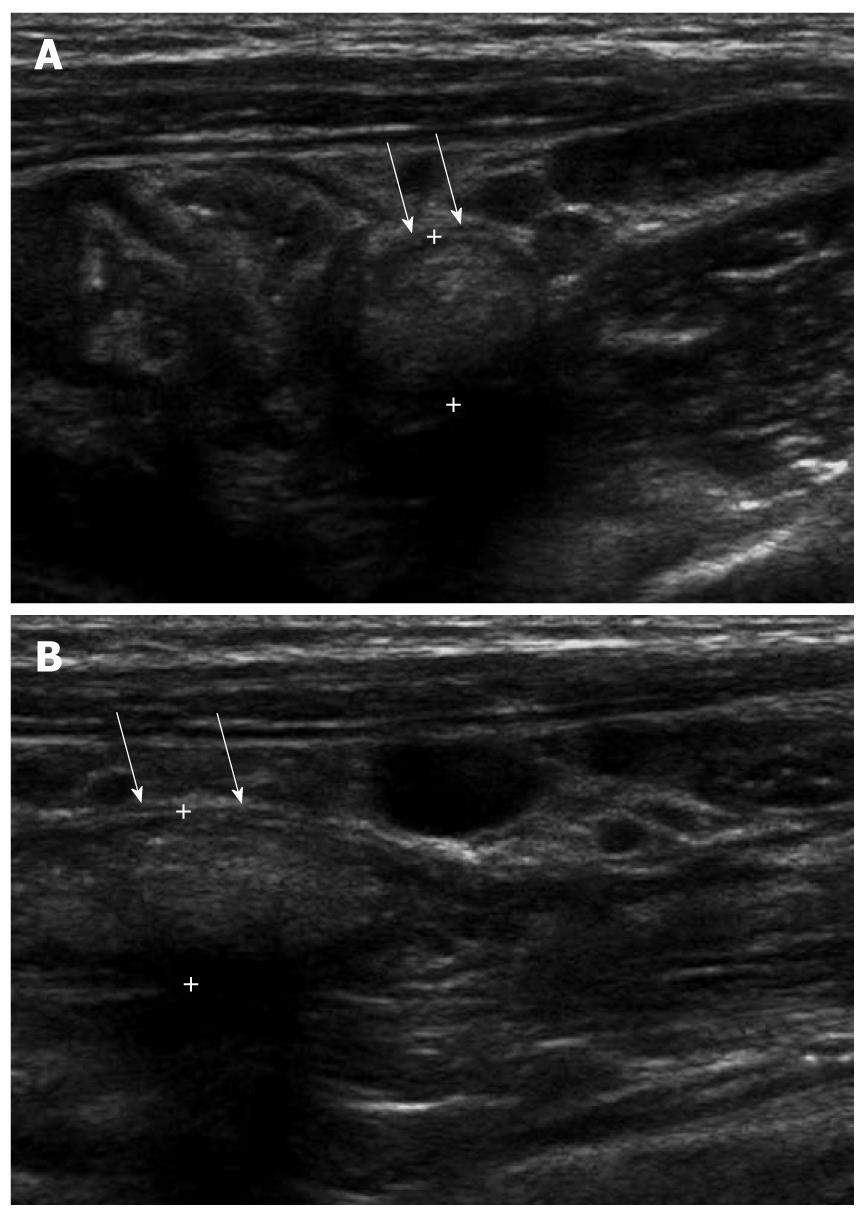 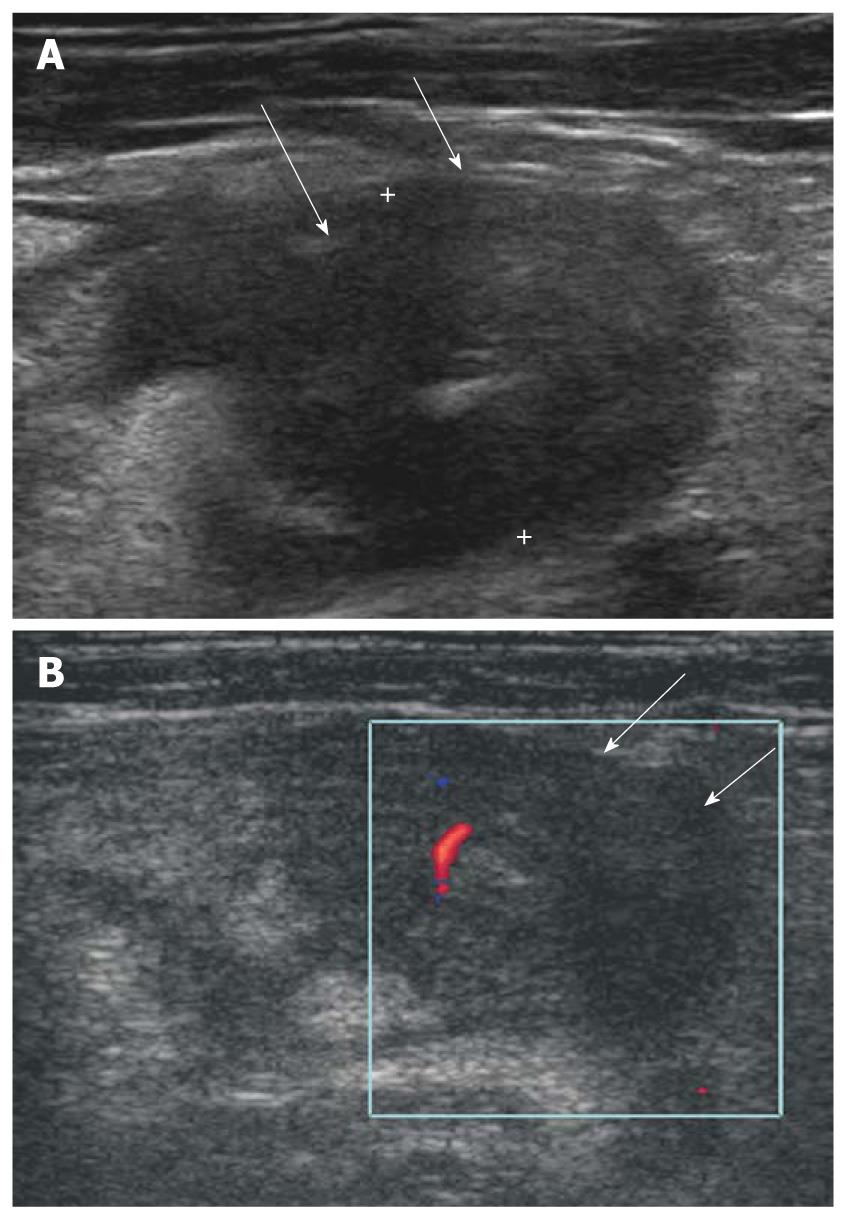 There are two major concerns when isolated Crohn’s appendicitis is diagnosed at the time of emergency laparotomy or during subsequent evaluation of the resected specimens, which are: is there concurrent involvement elsewhere in the gastrointestinal tract and what is the potential risk of local recurrence or development of disease elsewhere in the gastrointestinal tract? Both issues are of obvious critical importance for the optimal management of these patients. Yang et al[18] and Timmcke[19] reviewed the literature and noted that concurrent Crohn’s disease elsewhere in the gastrointestinal tract was present in approximately 25% of patients with Crohn’s appendicitis. The recurrence rate after appendectomy for localized Crohn’s disease has been reported to be 14%-50%[18-20].

SECONDARY APPENDICITIS DUE TO A GENERALIZED GASTROINTESTINAL INFECTION

Although rare, there are numerous bacterial, viral, fungal and parasitic infections that can affect the appendix as part of a generalized gastrointestinal disease[13]. It is important to differentiate these disorders from primary acute appendicitis, because the former can be treated with medical therapy for the primary causes and the latter should be treated with surgical therapy. Secondary appendicitis due to a generalized gastrointestinal disease is seen as an increase in MMT with preservation of wall layers, no demonstrable intraluminal exudates and no evidence of periappendiceal change in the setting of the presence of cecal and contiguous colonic wall thickening (Figure 5).

Figure 5 A 4-year-old female with acute colitis. A: Diffuse thickening of the colonic wall including cecum (arrows) was seen; B: Appendix (cursors) was also swollen with a maximal outer diameter of 7.8 mm and mildly increased echogenicity of periappendiceal mesenteric fat, which led to the misdiagnosis of acute appendicitis; C: The lymphoid follicles within the Peyer’s patches show granulomas with microabscesses (× 100, H-E stain), suggestive of yersiniosis.
ACUTE APPENDICITIS

Acute appendicitis in children is more difficult to recognize clinically than in adults because most children cannot describe their symptoms clearly and abdominal pain is often poorly localized[21]. The use of high frequency sonography with additional compression in children with acute abdominal pain have improved both diagnostic accuracy and treatment outcome[22].

The exact mechanism of appendicitis is not well characterized. However, the etiology is most likely multifactorial, a combination of ischemic mucosal damage and bacterial overgrowth with some luminal obstruction appears to be the most likely pathogenesis[23,24]. 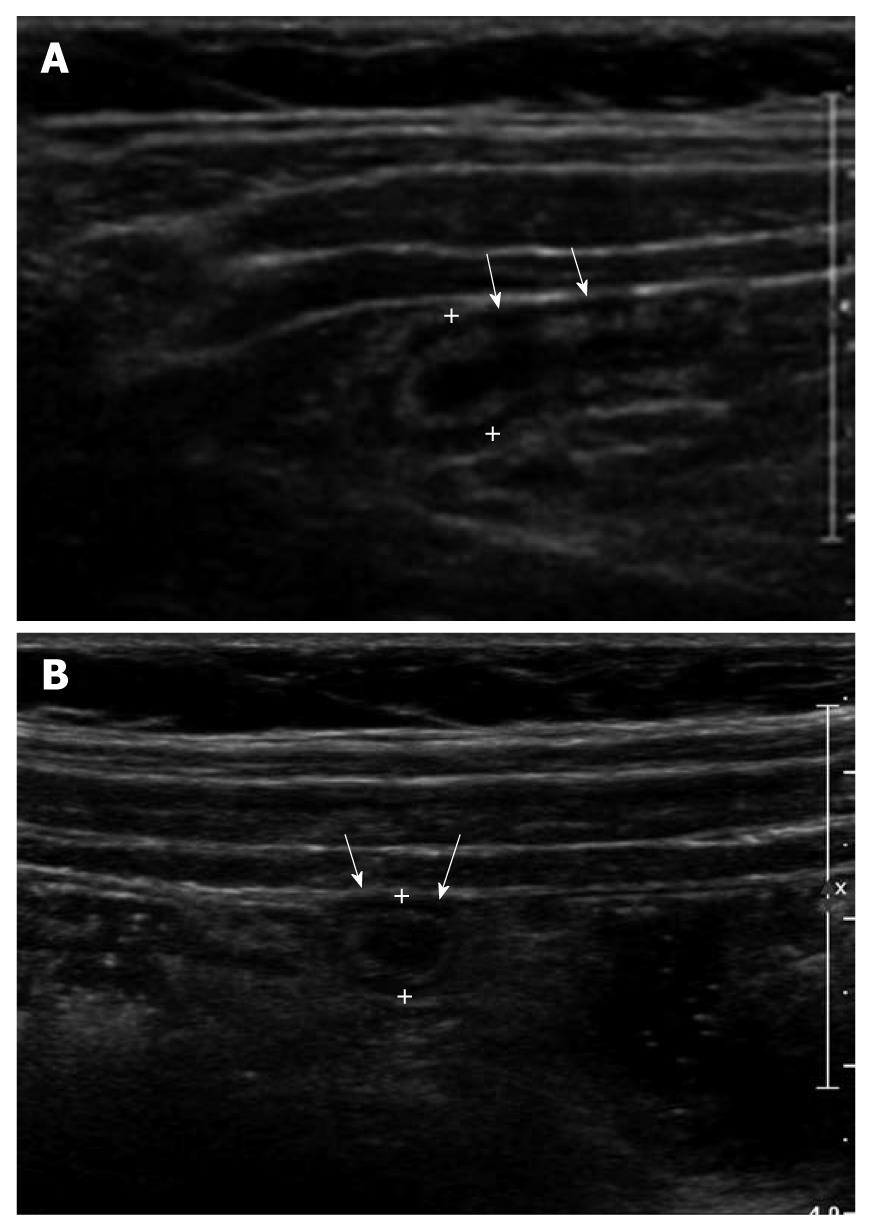 Figure 6 A 10-year-old male with a non-obstructive acute appendicitis. A: Thickening of appendiceal wall (arrows) with a maximal outer diameter (MOD) of 3 mm and some irregularity of the submucosal echogenic layer. However, no evidence of luminal distention and intraluminal appendicolith was found; B: MOD of inflamed appendix (arrows) was measured as 7.1 mm. 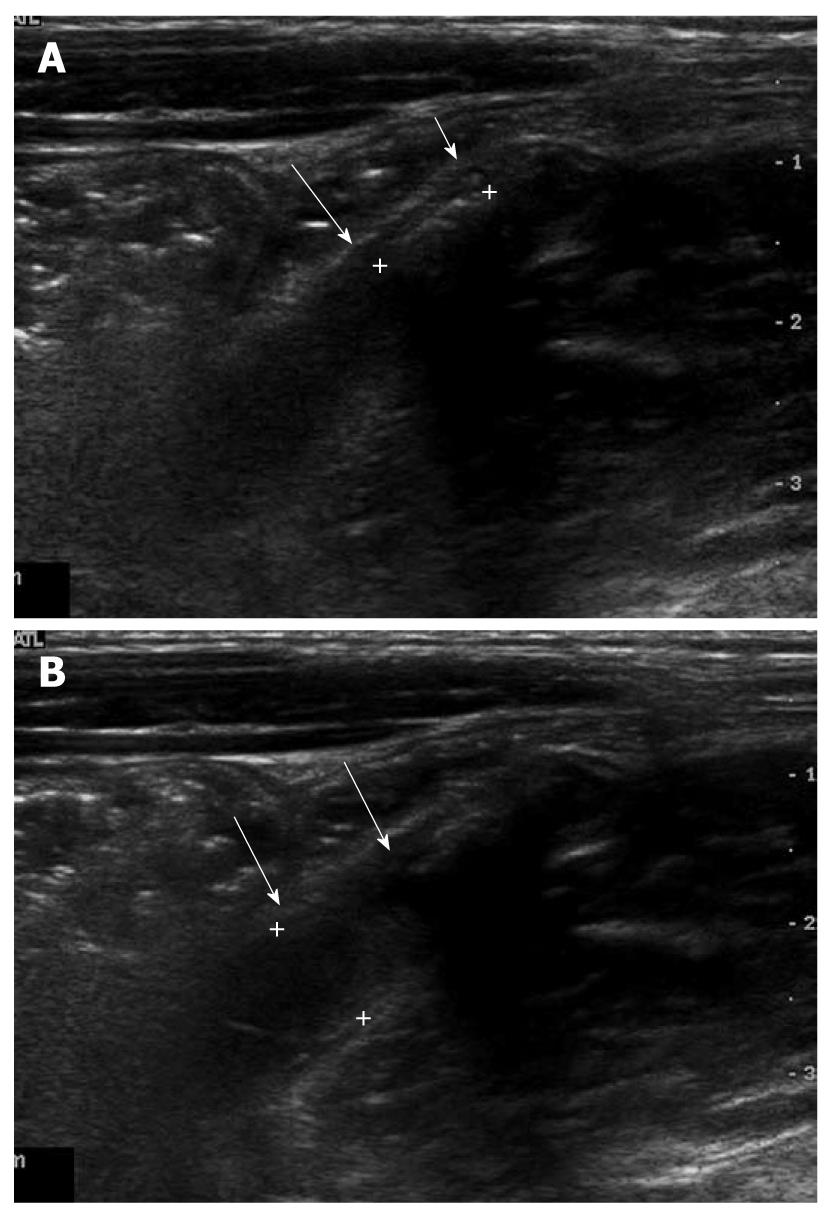 Figure 8 A 6-year-old male with acute appendicitis and fever. A: Distended appendix with dirty intraluminal fluid and hyperemia of appendiceal wall on color Doppler study (arrows). Periappendiceal mesenteric fat infiltration was identified; B: Because of lobar pneumonia, surgery was delayed and antibiotic therapy given. On follow-up ultrasonography 3 d later, the maximal outer diameter of appendix (arrows) was decreased to 4 mm with disappearance of intraluminal content; C: On follow-up after 6 d, the wall layers of the appendix (arrows) had recovered significantly. Periappendiceal mesenteric fat change had almost resolved.

However, the MOD may be larger than 6 mm without acute inflammation, due to the presence of intraluminal materials such as gas, feces and fluid[11,14,26,27] or mucosal lymphoid hyperplasia secondary to viral gastroenteritis or mesenteric lymphadenitis. To decrease the false positive rate of the MOD criterion, one should consider the intraluminal content, presence of periappendiceal change, MMT, preservation of wall layers and increase in blood flow in the appendiceal wall in equivocal cases[9-12,14].

The diagnosis of perforated appendicitis can be more difficult because the appendix frequently decompresses with perforation and yet may not “wall off” or form a well-defined abscess. As a result, identifying the appendix can be very difficult[28]. Marked inflammatory change of the mesentery/omentum and abnormal fluid collection or abscess formation in the right lower abdomen or pelvic cavity may be clues to the diagnosis of perforated appendicitis in children (Figure 9). 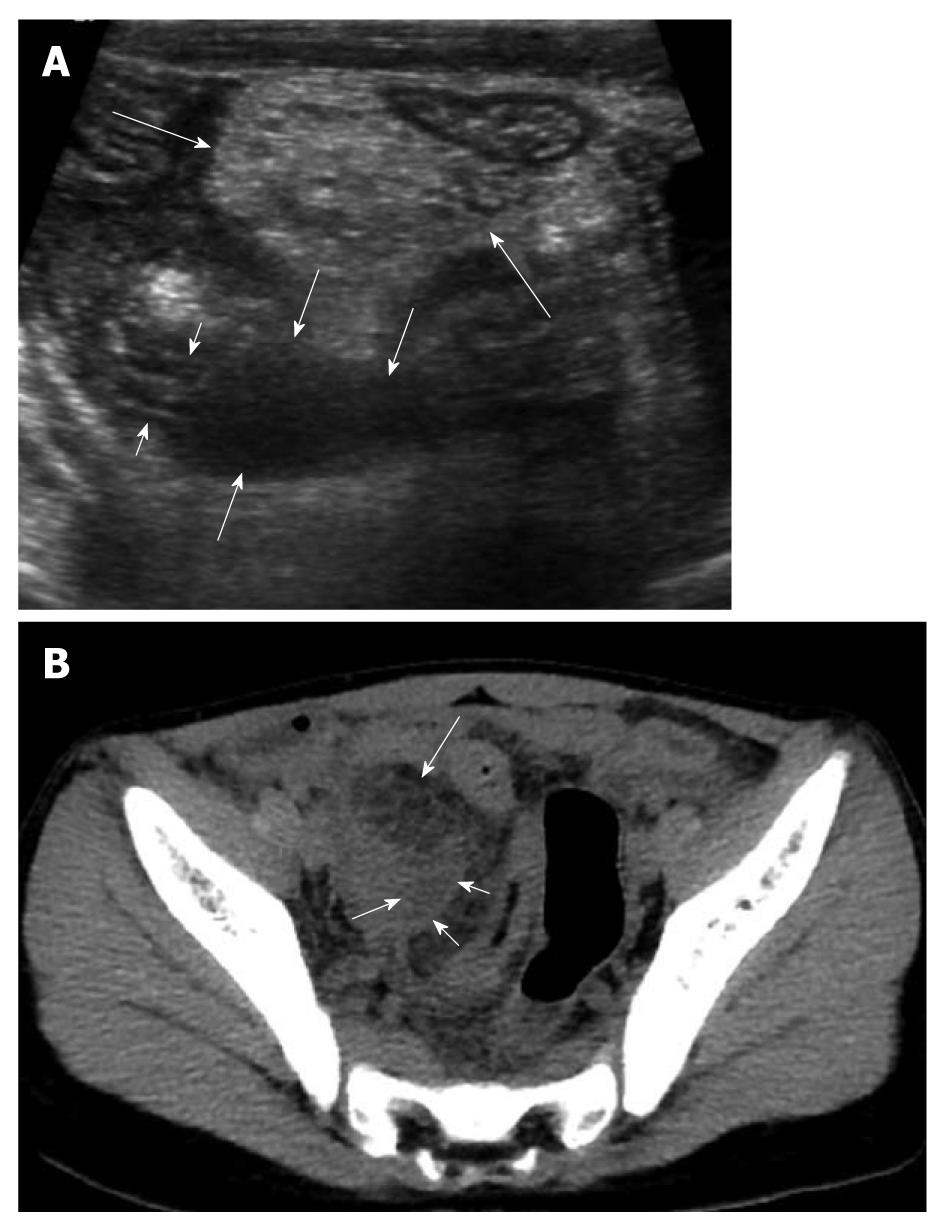 Knowledge of ultrasonographic findings of the normal and abnormal appendix is helpful in reducing the time and effort involved in detecting normal appendix and to diagnose or exclude acute appendicitis confidently.