Article-Type of This Article
Autobiography of Editorial Board Members

Dr. Feng Chen is a chief medical doctor and the vice chairman of the Department of Radiology in Zhong Da Hospital at Southeast University, Nanjing, China and a senior researcher in the Department of Radiology at the Catholic University of Leuven, Belgium. His main areas of interest are translational imaging research including stroke, tumor angiogenesis, assessment of therapeutic response in solid tumors, and magnetic resonance contrast media. Dr. Feng Chen has published 44 scientific papers in peer-reviewed international journals. He and his colleagues have developed an imaging platform which includes animal models, animal preparations and multiparametric magnetic resonance imaging (MRI) protocols for translational animal imaging research using clinical machines. His MRI findings on rodent stroke are considered to “serve as a model for future laboratory investigations of treatment of acute stroke and unify the approaches developed for clinical studies”. He and his colleagues have introduced a novel liver tumor model in rodents, in which a series of studies concerning the antitumor activity of vascular disrupting agents have been successively conducted and assessed by in vivo MRI, especially by diffusion weighted imaging as an imaging biomarker. His goal is to provide valuable references for clinical practice and to contribute to the translation of animal imaging research into patient applications.

Dr. Feng Chen is a chief medical doctor and the vice chairman of the Department of Radiology in Zhong Da Hospital at Southeast University, Nanjing, China. Currently, he is also a senior researcher in the Department of Radiology at the Catholic University of Leuven, Belgium (Figure 1). He obtained his Bachelor’s degree in Medicine in 1984 and Master’s degree in Radiology in 1987 from Nanjing Railway Medical College (known as Medical School of Southeast University since 2000), China. He was employed as a radiologist in Zhong Da Hospital of Southeast University from 1987 to 2001. He was awarded a Chinese Overseas Scholarship to support his clinical magnetic resonance imaging (MRI) research at Leeds University in the UK as a visiting scholar from 1997 to 1998. He obtained his PhD degree from the Catholic University of Leuven in 2007. Since then he has been employed at the University of Leuven. 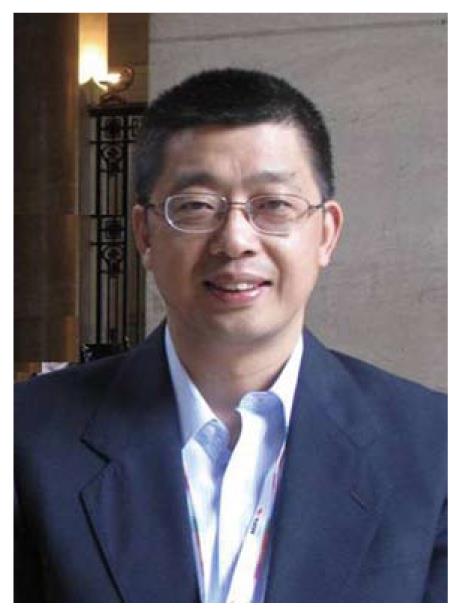 Dr. Feng Chen has published 44 scientific papers in peer-reviewed international journals. He has accepted several invitations to be a panel expert at international cancer conferences, to speak at international meetings, and to write reviews or chapters on small animal imaging and oncology imaging using clinical MR scanners. Throughout his academic career, he has been supported by a series of awards including the Chinese Scholarship Council; National Natural Science Foundation of China; EAR-ECR Research and Education Fund Fellowship Grant, European Congress of Radiology 2000, and European Union Asia-Link Program. He was also the silver prize winner of the QUIZ on Asian-Oceanian Seminars on Abdominal Radiology in 1997 and the silver prize winner of the QUIZ on Diagnostic and Interventional Radiology in 1999.

As a radiologist with more than 15 years work experience, Dr. Chen is well aware of the vital role of preclinical imaging research in studying the mechanism of human pathologies and in finding a solution for problems encountered in daily clinical practice. Therefore, over the last 9 years Dr. Chen’s main work has been focused on translational imaging research[1-15]. Since clinical MR scanners are available to most institutions conducting animal experiments, he and his colleagues have developed a platform which includes animal models, animal preparations and a multiparametric MRI protocol for translational animal imaging research using clinical machines[16]. Based on this imaging platform, a number of animal models such as the modified photothrombotic stroke model[1], implanted liver tumor model[4,17] and reperfused partial liver infarction model in rodents[11] have been characterized, and the therapeutic efficacy of some novel thrombolytic and anticancer agents have been monitored and evaluated[9,12,18]. Dr. Chen is also pursuing the further investigation of ischemic diseases and tumor angiogenesis imaging, and exploring novel specific imaging and biological markers for the noninvasive assessment of pathological processes. The goal is to provide valuable references for clinical practice and to contribute to the translation of animal imaging research into patient applications.

During the 5-year period of his PhD program, Dr. Chen systematically studied a model of photochemically-induced thrombosis (PIT) of proximal middle cerebral artery occlusion with MRI using a 1.5 Tesla clinical scanner[1-3,7,8,19]. With this model, the therapeutic effects of a novel anti-stroke agent, microplasmin (μPli) has been monitored and evaluated with MRI, and compared with the approved thrombolytic agent, tissue plasminogen activator (tPA)[9]. The results indicated that μPli with superior safety may be a potential alternative to tPA for the treatment of focal ischemic stroke.

The main findings of this series of studies included: (1) An ischemic penumbra defined with diffusion and perfusion mismatch using MRI has been approved in this PIT stroke model, which is used as an inclusion criterion before treatment[6,9]; (2) A delayed perfusion phenomenon has been observed for the first time in a stroke animal model by MR perfusion imaging, which plays an important role in maintaining perfusion to the “penumbra” region after stroke onset[3,8]; and (3) The evidence of μPli in the treatment of the stroke model has been documented with noninvasive multiparametric MRI[9,20].

The findings of Dr. Chen and his colleagues “demonstrate the ability to identify the ischemic and putatively infarcted regions before therapy, to institute therapy in a model that compares thrombolytic agents, and to document the response and complication rates. These findings serve as a model for future laboratory investigations of the treatment of acute stroke and unify the approaches developed for clinical studies” as stated in an Editorial on Dr. Chen and his colleague’s article which appeared in an issue of Radiology[21].

Dr. Chen’s research activities and contribution in this field are mainly associated with the following work:

Novel liver implanted tumor models in rodents were developed and characterized using comprehensive MRI techniques which included morphologic, functional, and metabolic information[4,17]. These models provided an upgraded research platform for the preclinical assessment of diagnostic and therapeutic strategies as indicated by the consequent outcomes listed below.

Diffusion weighted imaging (DWI) has emerged as a unique and powerful non-invasive MRI technique. Its value as an imaging biomarker has been investigated extensively in imaging-based diagnosis in a variety of translational applications including cerebral ischemia and solid tumors using small animals. Through technical adaptation and optimization, Dr. Chen and his colleagues have been able to perform clinically relevant animal studies with conclusions based on DWI quantification using a clinical magnet[5,22].

MRI monitoring and evaluation of experimental hepatic rhabdomyosarcoma treated with a vascular disrupting agent (VDA) has been conducted in a series of studies[12-15,18]. The results demonstrate that clinical MRI allows monitoring of VDA-related vascular shutdown and the discrimination between viable tissue and necrotic tumor tissue. However, a single dose of VDA seems insufficient for tumor eradication due to evident peripheral residue and recurrence[23]. Therefore, VDA combined with other therapeutic strategies, such as antiangiogenics, have been proposed and are undergoing investigation, and are believed to be more easily translated into patient practice because of the clinically relevant experimental set-up.

Necrosis-avid contrast agents (NACAs) have thus far been discovered and developed by Prof. Ni in the Catholic University of Leuven, Belgium as necrosis-targeting markers for MRI identification of non-viable tissue[24]. During recent years, Dr. Chen has been actively involved in the investigation of NACAs[25,26] and their application in acute myocardial infarction[27], tissue viability assessment, and therapeutic evaluation after interventional therapies[28].

Dr. Chen also compared the effects of two superparamagnetic iron oxide (SPIO) contrast agents, ferumoxides and SHU-555A, in MRI of liver and spleen in the early phase of their clinical application[29], which provided valuable information for best practice in patients.

Gastric carcinoma is one of the leading causes of death in East Asia. Dr Chen was awarded an EAR-ECR Fellowship Grant in this field by the Research and Education Fund during the European Congress of Radiology 2000 in Vienna. In this study, two- and three-dimensional display techniques after spiral computed tomography (CT) scanning were cross-referenced. The role of the combined CT technique was compared with that of upper gastrointestinal series, fiberoptic gastroscopy and histopathology in the detection, Borrmann’s classification, and staging of gastric carcinoma[30]. Based on the work described above, Dr. Chen, together with two colleagues, edited a book entitled “Virtual Endoscopy and Related 3D in Clinical Medicine”[31]. Dr. Chen also systematically introduced the diagnostic test, the receiver operative characteristic curve (ROC)[32] approach in diagnostic radiology in China.

Dr. Chen systematically investigated and reported, for the first time, the occurrence of anomalous junction of the pancreaticobiliary duct (AJPBD) based on cholangiopancreatography in a Chinese population. The results showed that AJPBD is a possible risk factor for biliary duct and pancreatic diseases. A new complex pattern of AJPBD was proposed and a novel technique for magnetic resonance pancreatography after oral juice stimulation was developed. Dr. Chen’s study findings have been listed as one of the most important advances in abdominal radiology in China[33].

Medical imaging is a rapidly growing field in medicine. Small animal imaging has becoming a major player in an increasing number of animal experiments in which MRI has been a favorite choice for in vivo monitoring due to its advantages which include excellent resolution and innocuousness[34]. As one of his research interests, Dr. Chen’s work will focus on the novel anti-tumor strategies involving the application of VDA assessed by in vivo imaging techniques. Antivascular tumor therapies with VDAs are a promising approach in oncologic research and have been conducted in a number of studies[5,12,14,18]. However, rapid tumor re-growth from a residual viable rim after treatment with a VDA compromises the therapeutic efficacy of these agents[23]. Several approaches have been suggested to solve this problem including biological and targeted radiotherapy methods. For instance, tumor rebound after VDA treatment is reported to be associated with the acute mobilization of bone marrow (BM)-derived circulating endothelial progenitor cells (EPCs) induced by VDA, which contributes to the responsive tumor neoangiogenesis. The combined use of antiangiogenics with VDA may inhibit the mobilization of EPCs so that tumor recurrence may be prevented or reduced[35]. However, critical controversy exists in the literature regarding this theory and the consequent role of EPCs in tumor growth[36]. Therefore, exploration of this scientific issue may allow better insight into the mechanism of tumor recurrence, and lead to new anti-tumor strategies and promote imaging research.