Pulmonary hemosiderosis is defined as the clinical and functional consequence of iron overload of the lungs, which usually occurs due to recurrent intra-alveolar bleeding. It can manifest as miliary mottling and should be entertained in the differential diagnosis of patients presenting with miliary nodules on chest radiography, especially those with mitral stenosis. The management of secondary pulmonary hemosiderosis secondary to valvular heart disease includes valvuloplasty and/or valve replacement. The radiological opacities may disappear with successful treatment of the underlying valvular disease in many patients. However, they may persist with no physiological impairment to the patient. Here, we present a 32-year-old man with mitral stenosis who presented with fever and miliary shadows on chest radiography, which was ultimately diagnosed as secondary pulmonary hemosiderosis.

Pulmonary hemosiderosis is a rare pulmonary disease that manifests as a triad of hemoptysis, anemia and diffuse parenchymal infiltrates on chest radiography. This condition occurs due to the deposition of hemosiderin-laden macrophages in lungs as a result of repeated alveolar hemorrhage that subsequently leads to the development of pulmonary fibrosis[1]. Hemosiderin is formed by the breakdown of red blood cells and release of iron in heme. It reflects an alveolar abnormality, which may be a primary condition or secondary to a systemic disease. In general, primary pulmonary hemosiderosis is more common than secondary types[2]. The common secondary causes are collagen vascular diseases, coagulation disorders and cardiovascular disorders, especially mitral stenosis[1,3-5].

Mitral stenosis typically results from rheumatic heart disease, although it may be congenital. The increased left ventricular filling pressure in mitral stenosis leads to pulmonary venous hypertension, and, eventually, post-capillary pulmonary arterial hypertension. Recurrent bleeding from the anastomoses between pulmonary arterioles and bronchial vessels results in pulmonary hemosiderosis. Radiologically, hemosiderosis may present as diffuse reticular or miliary nodular opacities, and is seen in 10%-25% of patients with mitral stenosis[6]. Diagnosis is confirmed by the demonstration of hemosiderin-laden macrophages in bronchoalveolar lavage and lung biopsy. This condition is also called “brown lung induration” and is characterized histologically by alveolar hemorrhage, hemosiderin-laden macrophages in the alveoli and, to a lesser extent in the interstitium, and mild interstitial thickening that can become prominent in long-standing cases, leading to septal fibrosis[7]. Here, we present the case of a 32-year-old patient who presented with miliary opacities and was ultimately diagnosed with pulmonary hemosiderosis secondary to mitral stenosis. Being a high-prevalence country for tuberculosis (TB), a diagnosis of miliary TB was initially considered in the differential diagnosis of this patient.

A 32-year-old man was admitted with complaints of fever, dry cough and worsening breathlessness of 3 d duration. There was no history of chest pain, hemoptysis or leg edema. In the past, there was a history of fever and joint pains at the age of 5 years, for which he was admitted to hospital, and since then, the patient has been receiving injections of benzathine penicillin every 3 wk. The patient also had a history of progressive dyspnea on exertion over the past 12 years, and before this current hospitalization, his dyspnea was severe enough to limit his daily activities. There was no previous history of cough, chest pain or hemoptysis. For the present illness, he first visited his general practitioner who performed a chest radiograph (Figure 1), which revealed cardiomegaly with straightening of the left heart border, and diffusely distributed miliary (approximately 3 mm) nodular opacities. The patient was subsequently referred to this institute for work-up of fever and the radiological opacities. 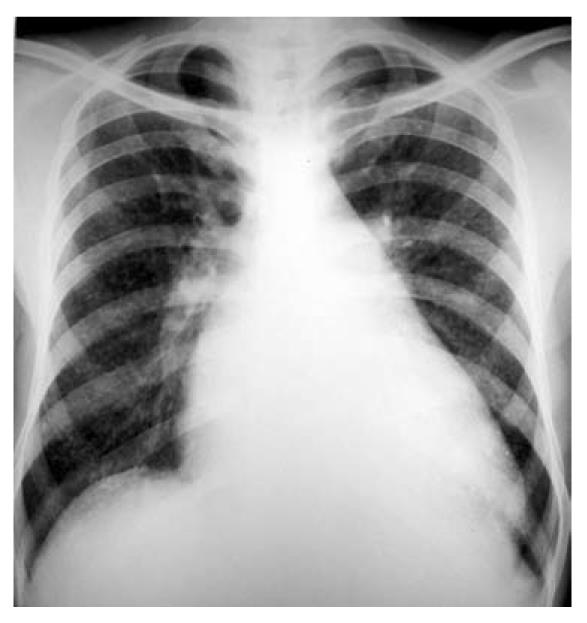 Upon examination, the patient was conscious and afebrile with a pulse rate of 96 beats/min, blood pressure of 130/70 mm Hg, and respiratory rate of 20 breaths/min. Jugular venous pulse showed prominent a waves; examination of the cardiovascular system showed the apex to be located at the sixth intercostal space in the anterior axillary line, and a palpable diastolic thrill. Auscultation revealed a loud first heart sound, a loud pulmonic component of the second heart sound, and a mid-diastolic murmur with a presystolic accentuation. Examination of the respiratory system was normal. There were no joint deformities or joint tenderness. The rest of the physical examination was unremarkable. 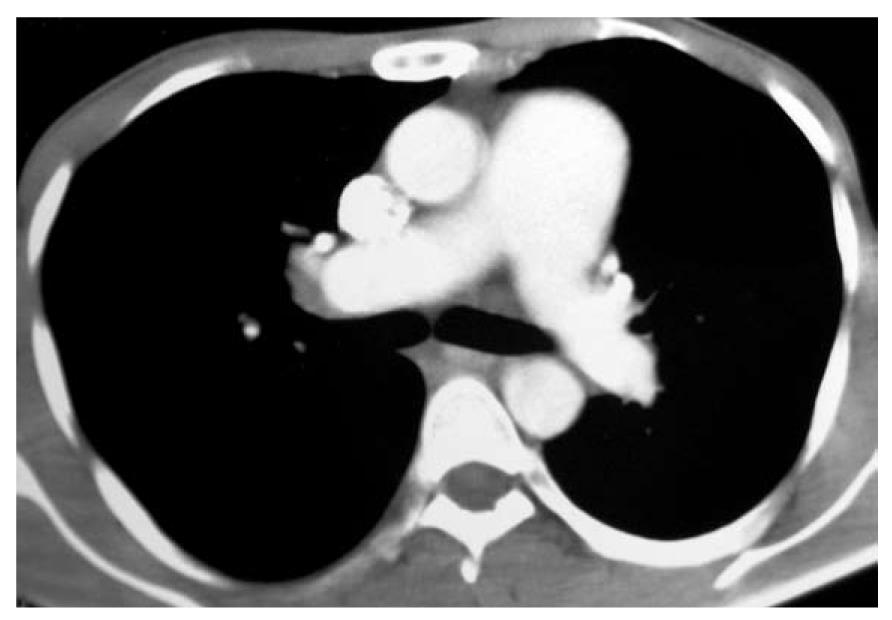 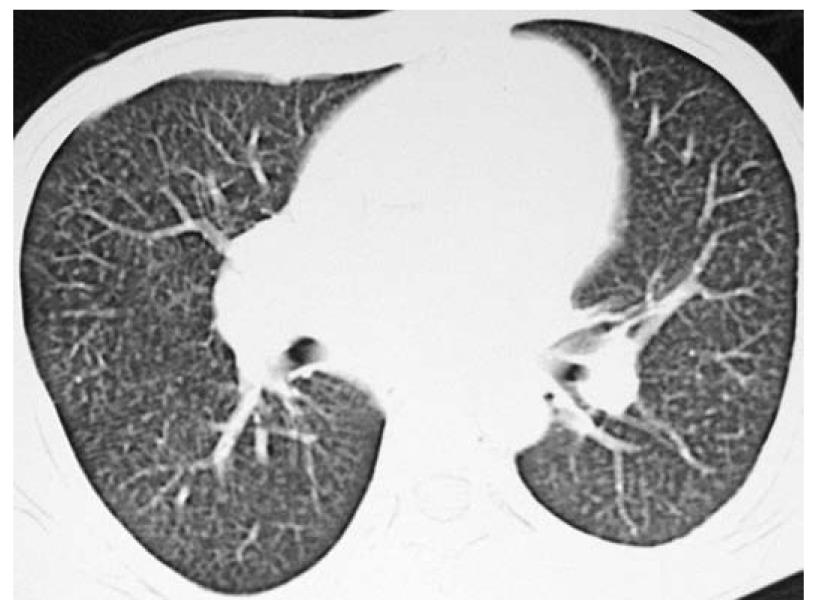 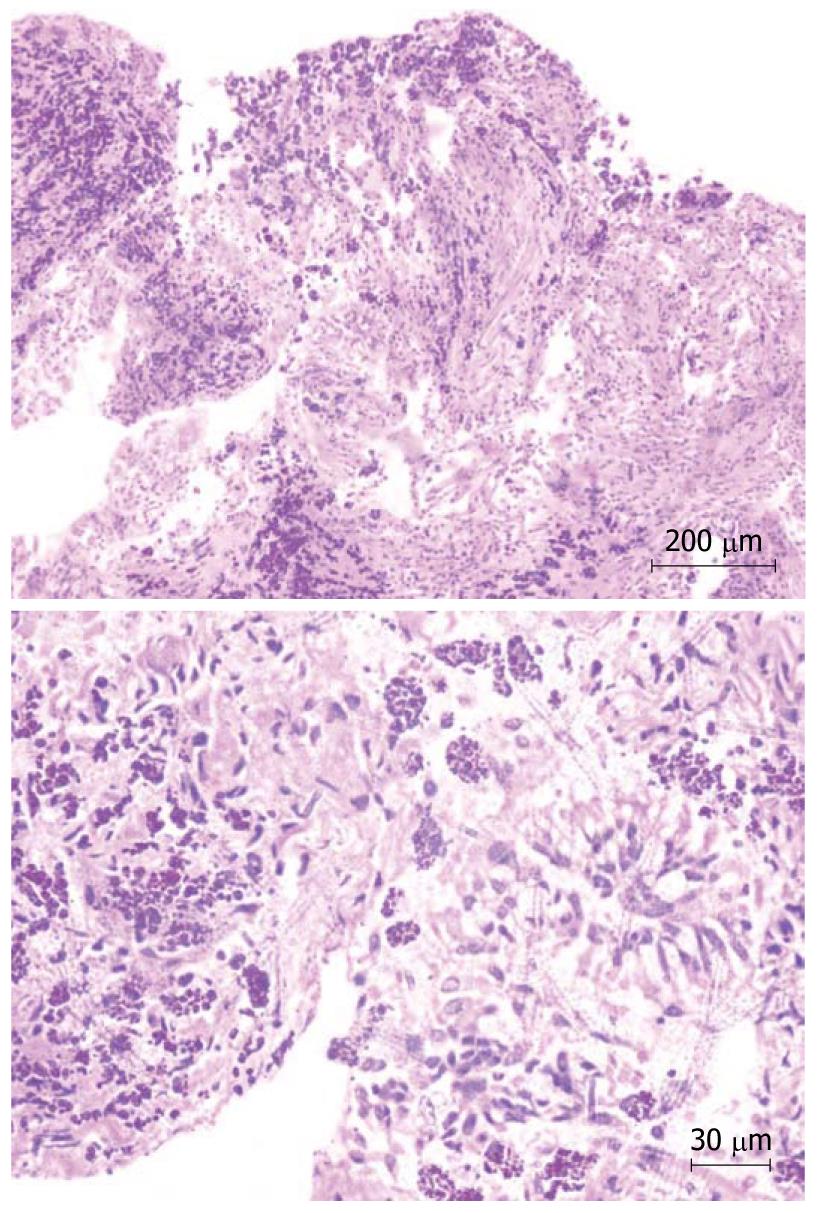 The term hemosiderosis is derived from the Greek words, hemo (blood) and sideros (iron), and is characterized by the focal or generalized accumulation of iron in the form of hemosiderin[3]. Hemosiderin is an intracellular storage form of iron (> 33% iron by weight) and contains ferric hydroxides, polysaccharides, and proteins. The main source of iron in the lungs is from the red blood cells and is metabolized during episodes of alveolar hemorrhage. After 48-72 h of acute bleeding, the alveolar macrophages convert hemoglobin iron into hemosiderin, hence the term hemosiderosis.

Pulmonary hemosiderosis is the clinical and functional consequence of iron overload of the lungs. The deposition of hemosiderin in the lung was first commented upon by Virchow in 1858, but it was in 1928 that Rosenhagen described the occurrence of pulmonary hemosiderosis in association with valvular heart disease[8]. The term pulmonary hemosiderosis is reserved for recurrent intra-alveolar bleeding because hemosiderin-laden macrophages reside for up to 4-8 wk in the lungs. Pulmonary hemosiderosis is considered idiopathic (also known as Ceelen-Gellerstedt’s syndrome) if no other cause is identified, and if the lung biopsy excludes capillaritis, granulomas, or other immune depositions. It can also occur due to various other causes of recurrent alveolar hemorrhage, including mitral stenosis[2]. The diagnosis is often missed because the bleeding can be covert, and hemoptysis is often missing, as in the present case[1].

Iron exerts a toxic effect, partially through its capacity to produce highly reactive hydroxyl radicals from less toxic oxygen superoxide and hydrogen peroxide (Haber-Weiss and Fenton reactions), which in turn, cause lipid layer peroxidation, protein and carbohydrate degradation, and subsequent fibrogenesis[3]. Within the pulmonary macrophages, iron is removed from hemoglobin by the enzyme heme oxygenase, however, the capacity of alveolar macrophages to metabolize iron is easily exhaustible, and the presence of free iron in the alveoli can cause local injury and fibrosis.

Management of secondary pulmonary hemosiderosis secondary to valvular heart disease includes valvuloplasty and/or valve replacement. There are cases on record where there is gradual clearance of the pulmonary opacities after treatment of mitral stenosis[1]. On the other hand, there are cases where there is little fibrotic reaction in spite of radiological (as in our patient) and autopsy evidence of heavy pulmonary hemosiderosis[1,6-8,10].

In conclusion, pulmonary hemosiderosis secondary to mitral stenosis can present as miliary nodules on chest radiography, and this fact should be kept in mind when managing such patients. Although in many cases the radiological opacities may disappear with successful treatment of the underlying valvular disease, in others, the radiological opacities may persist with no physiological impairment to the patient.