Tracheobronchial obstructions arising from either benign or malignant diseases result in dyspnea, stridor, and obstructive pneumonia, and can occasionally be life-threatening due to suffocation. Even in the absence of parenchymal lung disease, ventilatory failure frequently occurs if the obstruction is not relieved. Tracheobronchial obstructions are challenging to manage, particularly in patients unsuitable for curative surgery, with endobronchial intervention having an increasing role in their management[1]. Endobronchial intervention can be performed under local anesthesia by fluoroscopic guidance and/or fiberoptic bronchoscopy, or under general anesthesia using rigid bronchoscopy. Although aggressive endobronchial interventions for tissue destruction (Nd YAG laser, argon plasma coagulation, cryotherapy, or electrocautery) can be performed using rigid bronchoscopy, balloon dilation and stent placement can be performed using fluoroscopic guidance and/or flexible bronchoscopy.

Bronchoscopically or fluoroscopically guided balloon dilation is an accepted initial therapy for patients with benign bronchial strictures, primarily because balloon dilation is associated with lower morbidity and mortality rates than corrective surgery. The balloon dilates the stenotic trachea or bronchus by stretching and expanding the bronchial wall, making balloon dilation appropriate for the treatment of cicatric annular strictures. Balloon dilation has been extended to the treatment of tracheobronchial stenoses due to, for example, post-intubation tracheal stenosis, postoperative anastomotic stenosis, granulomatous stenosis (tuberculosis, histoplasmosis), radiation therapy, mediastinal fibrosis, congenital stenosis, bronchial trauma and bronchial artery embolization[2-5]. Before balloon dilation, the site, severity, proximal and distal extent, and characteristics of the stricture should be evaluated by conventional radiography, computed tomography scans including three-dimensional reconstructions, and/or bronchoscopy. 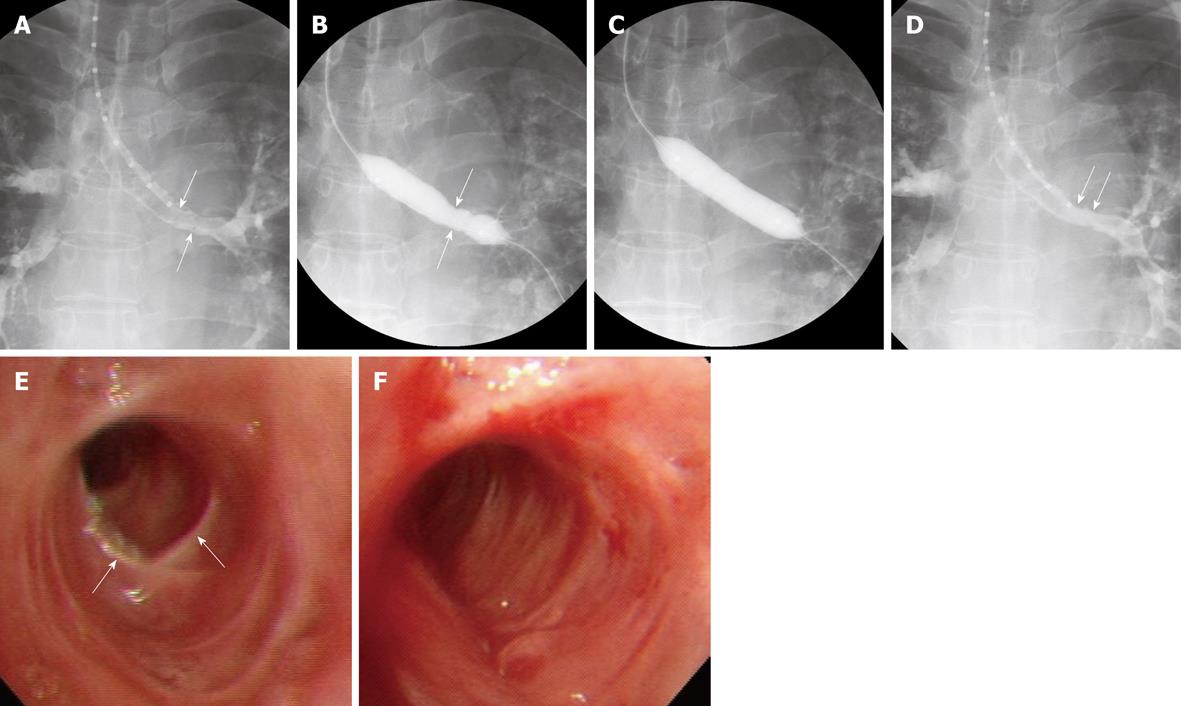 A review of several representative studies, each including 21-59 patients[2,3,5-7], found that the technical success rate was 100% and that all patients achieved initial symptomatic improvement. In some of these studies, however, up to 80% of patients required adjuvant treatment, including stent placement and laser therapy[2,3,5-7].

Complications associated with balloon dilation include chest pain during dilation, bronchospasm, atelectasis after dilation, superficial or deep mucosal laceration, pneumomediastinum, and massive bleeding have been reported[3,8-10]. In one large series, bronchial lacerations occurred during 64 of 124 (52%) tracheobronchial balloon dilation procedures, but none of these progressed to transmural laceration[10]. The median cumulative airway patency period was significantly longer in patients with than in those without lacerations (24 mo vs 4 mo), indicating that laceration secondary to balloon dilation may improve patency outcomes[10].

Tracheobronchial balloon dilation is a simple, rapid, and safe method of restoring airway lumen, providing immediate symptom relief. This simple procedure may be a first option in the treatment of benign airway stenosis. If restenosis occurs, however, adjuvant endobronchial therapy, consisting of stent placement or laser treatment, will be necessary.

Up to 30% of patients with lung cancer have been reported to develop central airway obstruction secondary to endoluminal disease or external compression by a hilar tumor or bulky lymphadenopathy[12]. Recent technological advances have increased the popularity of tracheobronchial stents with interventional radiologists and chest physicians, particularly because stenting is effective for both extraluminal and intraluminal lesions and promptly relieves acute airway distress from airway obstruction. Expandable metallic stents are better tolerated than, and preferred to, non-expandable silicone stents because the former are more flexible and can be used in smaller delivery systems.

Stent placement is indicated for patients with submucosal and extraluminal pathology or tracheobronchomalacia, as well as for patients with intraluminal pathology (Table 1 and Figure 2). Tracheobronchomalacia is a special entity denoting functional airway obstruction with destruction of the surrounding airway cartilage. In patients with malignancies, the most common indication for stent placement is bronchogenic carcinoma, which can present as extraluminal compression with or without an intraluminal lesion. Tracheobronchial stenting is the only immediate treatment for unresectable extraluminal compression, promptly stabilizing a threatened airway while the primary tumor is treated with radiation or chemotherapy. 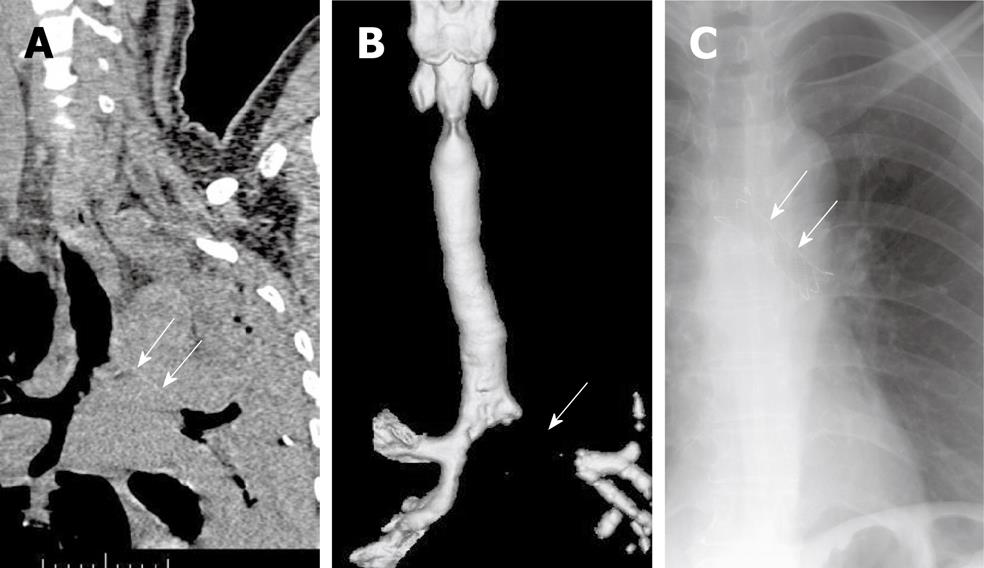 The only definitive contraindication for placement of an airway stent is in patients with external compression of the airway by a vessel. Stent placement in these patients was associated with unacceptably high rates of erosion, hemorrhage, and death[12].

Expandable metallic stents can be inserted only under fluoroscopic guidance and only by radiologists with patients under topical anesthesia. Due to the importance of bronchoscopic evaluation immediately before and after stent placement, bronchoscopic assistance is valuable. Moreover, it is relatively easy to insert a guide wire across the stricture into the distal portion of the trachea or bronchus through the working channel of the bronchoscope.

The techniques for providing topical anesthesia, introducing the guide wire and catheter into the tracheobronchial tree, and obtaining selective tracheobronchography are the same as for balloon dilation. Subsequently, the location of the narrowed lumen can be marked on the patient’s skin using radiopaque markers. With the patient in a supine position and with the neck fully extended, the delivery system, the proximal part of which is lubricated with jelly, is passed over the guide wire into the trachea and is advanced until the distal tip reaches beyond the stricture. When the stricture is severe (i.e. more than two-thirds of the lumen is narrowed), the stenotic portion is dilated with an angioplasty balloon catheter. The stent should be at least 10 mm longer than the stricture, so that the proximal and distal parts of the stent rest on the upper and lower margins of the stricture, respectively.

Following stent placement, its patency and location are evaluated by bronchoscopy. It is important to avoid inexact stent deployment that results in partial obstruction of a bronchial orifice or incomplete coverage of a tumor stenosis. If this occurs, the stent should be repositioned using bronchoscopic biopsy forceps or it should be removed and its placement reattempted.

Early investigators used forceps/rotation techniques to remove uncovered expandable metallic stents under general anesthesia[16,17]. In patients in whom the stent was tightly welded to the tracheobronchial wall, however, this removal procedure carried potential risks of mucosal bleeding and airway occlusion during the procedure. Our removal technique uses a hook-like device and has been reported to be safe and easy to perform because the stents (Song Airway Stent, S&G Biotech, Seongnam, Korea) are completely covered and designed for optimal removal[13-15,18]. To make the stent removable, a nylon loop is hooked inside each bend of its proximal end and two nylon threads are passed through each loop. To remove these stents, a hooked wire is introduced into the sheath and passed through it into the stent lumen. The sheath containing the hook is then pulled out of the stent so that the hook grasps the drawstring. When this occurs, the hook wire is withdrawn through the sheath, collapsing the proximal stent. The sheath, hook wire, and stent are then pulled out of the trachea.

In benign tracheobronchial stenosis, technical success rates of 100% and clinical success rates of 88-100% have been reported in 46 patients across three representative studies using uncovered self-expandable stents[19-21]. The most common causes of stenosis in these patients were post-lung transplantation strictures and tuberculosis. Stent fracture was the most commonly observed complication, occurring in seven patients (15%), followed by granulation tissue formation (7%) and stent migration (2%). Four patients (9%) required stent removal due to stent fracture or migration, but stent removal was difficult because the wire mesh was embedded in the airway walls. These findings indicate that the placement of permanent stents may not be ideal due to the formation of granulation tissue. We have placed 30 covered retrievable expandable metallic stents into 24 patients[13], resulting in technical and short-term clinical success rates of 100%. All stents were successfully removed electively, either 2 (n = 12) or 6 (n = 12) months after placement or when complications occurred (n = 6). The 6-mo stenting group showed a lower recurrence rate (41.7% vs 83.3%, P = 0.045) and a better mean maintained patency (39.7 ± 7.8 mo vs 9.4 ± 5.4 mo, P = 0.001) than the 2-mo stenting group. Although stent migration and tissue hyperplasia at either end of the stent was observed in 13% and 37% of these patients, respectively, stent removal was easy and safe.

Four representative studies of stent placement, two using uncovered[22,23] and two using covered[18,24] stents, in 133 patients with malignant tracheobronchial stenosis showed technical success rates of 98%-100% and clinical success rates of 82%-92%. Covered metallic stents were associated with much higher rates of stent migration (12%-17%) and sputum retention (20%-38%) than uncovered metallic stents (0% and 9%, respectively). In contrast, tumor ingrowth into the stent lumen occurred more often with uncovered (21%-23%) than with covered (0%) metallic stents because the former do not contain covering material between the wire mesh. In patients with malignant bronchial obstructions, involvement of the lower-lobe segmental bronchus has been associated with lower rates of radiologic and clinical improvement following stent placement[25].

In patients with benign disease, stent migration is more likely when there is no substantial extrinsic compression maintaining the stents in place and when short stents are placed in conical stenoses. In patients with malignancies, migration can be expected after tumor shrinkage from radiation or chemotherapy. Granulation tissue is more likely to form at the proximal and distal ends of the stent, and excessive granulation tissue can lead to obstruction of the airway. This occurs more commonly with metallic stents, especially uncovered stents (up to 7%), than with silicone stents because metal stents are more rigid and have multiple edges, therefore causing more irritation. The incidence of tumor overgrowth at the tip of the covered metallic stent depends on the follow-up period and extent of the malignancy at the time of stent placement and has been reported to occur in 6%-28% of patients[18,24]. Because airway obstruction by tumor ingrowth/overgrowth can be life-threatening, patients with new symptoms or radiographic findings should undergo further diagnostic evaluation. Sputum retention is more likely to occur after placement of silicone and covered expandable metallic stents than after placement of uncovered expandable metallic stents due to impaired mucociliary clearance in the former. Lack of mucociliary clearance can lead to obstruction and infection.