Whole brain radiotherapy (WBRT) remains the standard management of breast cancer patients with brain metastases, allowing for symptomatic improvement and good local control in most patients. However, its results remain suboptimal in terms of both efficacy and toxicity. In highly selected breast cancer patients, stereotaxic radiotherapy demonstrates a very good local control with a low toxicity. With the purpose of improving the efficacy/toxicity ratio, we report the association of integrated boost with WBRT in a breast cancer patient with brain metastases. Two and a half years after completion of helical tomotherapy (HT), the patient experienced clinical and radiological complete remission of her brain disease. No delayed toxicity occurred and the patient kept her hair without need of radiosurgical procedure. The HT provided a high dosimetric homogeneity, delivering integrated radiation boosts, and avoiding critical structures involved in long-term neurological toxicity. Further assessment is required and recruitment of breast cancer patients into clinical trials is encouraged.

Brain metastases are usually seen as a late complication of advanced breast cancer, for which most available treatment options are generally unsatisfactory. Whole brain radiotherapy (WBRT) provides effective but short-term palliation, improving survival by about 6 mo and quality of life with radiologic response in up to 60% of cases[1,2]. It was suggested that selected subgroups of patients may benefit from more aggressive local treatment of their intracranial disease with surgery or radiosurgery with or without WBRT [2,3]. Providing a potential alternative to conventional stereotactic frame systems for precision radiotherapy, helical tomotherapy (HT) combines intensity modulated fan-beam radiotherapy with megavoltage computed tomography imaging for patient positioning. Its availability has recently opened new fields of exploration for radiation therapy due to its ability to tailor very sharp dose distributions around the target volumes[4-9]. Here we report the use of HT with synchronous boost in a breast cancer patient with multiple brain metastases.

In October 2007, a 40-year-old female presented with multiple brain metastases from breast cancer measuring 17 mm in greatest dimension, discovered at systemic magnetic resonance imaging (Figure 1A). She had a history of infiltrative ductal carcinoma with lymph nodes, bone, and lung metastases treated since 2005. She received only one systemic regimen used for brain metastases (vinorelbine) prior to radiotherapy. The patient refused to accept the long period hair lost. 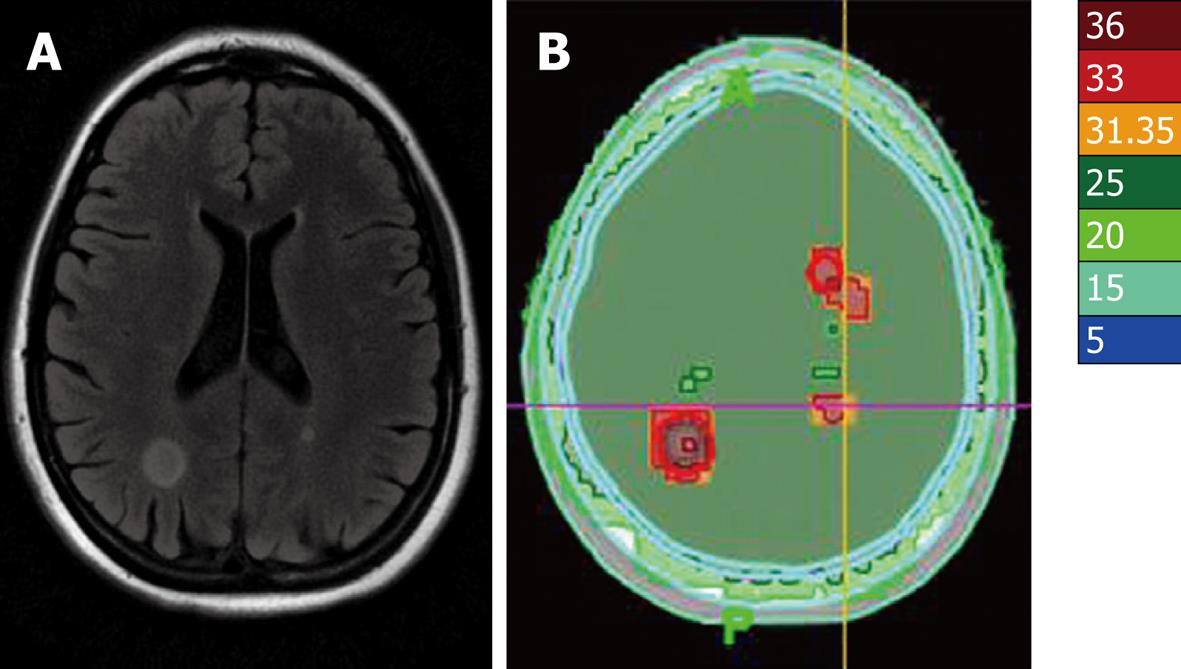 The patient was deferred for HT, delivering 30 Gy using 6 MV photons, at 3 Gy per daily fraction, in the whole brain for 14 d, concurrently with vinorebine. The only acute toxicity observed was nausea. Integrated synchronous boost treatments were used, in order to deliver 36 Gy in the growth tumoral volumes (Figure 1B). The dose delivered to the scalp was less than 15 Gy. Six months after HT, the metastases were stable in size, with intra-tumoral necrosis and rounded with an edema that accurately drew the shape of isodoses (Figure 1B). The dose volume histograms are given in Figure 2.

Two and a half years after completion of HT, the patient experienced clinical and radiological complete remission of her brain disease. No delayed toxicity occurred and the patient kept her hair without need of radiosurgical procedure.

Since the progress of systemic regimens allowed for a prolonged survival time of some patients with metastatic breast cancer[2], it has become an ordinate challenge for radiation oncologists to make an attempt to reduce the radiation-induced toxicity of WBRT, including progressive neurocognitive disorders. Highly conformational HT allows for efficient target coverage and critical organs sparing, including the scalp. A recent assessment of HT for metastatic brain tumors has suggested comparable normal tissue sparing and target coverage compared with other precision radiotherapy techniques[5]. With HT, multiple targets can be easily treated at different dose levels in the course of rotational delivery[1]. This specificity allows for integrated synchronous boost treatments that may be efficiently used to increase the radiation dose delivered to the brain metastases, thus preserving the patient quality of life.

Our patient well tolerated the radiotherapy without any early toxicity. Two and a half years after the treatment, the patient was still alive at the time when we wrote this paper, without any sequels associated with radiotherapy treatment.

The association of chemotherapy permitted the continuing systemic treatment during the radiotherapy. We have already published our experience with concurrent radiotherapy - Xeloda regimen[2], as well as vinorelbine-5FU-radiotherapy for breast cancer patients. These regimens were well tolerated without any alopecia and adapted to the patient’s desires.

In conclusion, the doses of HT used in brain tissue are significantly lower than those of conventional WBRT. Moreover, HT may contribute to the prevention of definitive alopecia which is a universal complication of WBRT, and to patient anxiety over treatment. This is an acceptable treatment option in such patients.