Allergic bronchopulmonary aspergillosis (ABPA) is a complex hypersensitivity syndrome triggered against antigens of Aspergillus fumigatus, a fungus that most commonly colonizes the airways of patients with bronchial asthma and cystic fibrosis. It presents clinically with refractory asthma, hemoptysis and systemic manifestations including fever, malaise and weight loss. Radiologically, it presents with central bronchiectasis and recurrent episodes of mucus plugging. The mucus plugs in ABPA are generally hypodense but in up to 20% of patients the mucus can be hyperdense on computed tomography. This paper reviews the literature on the clinical significance of hyperattenuated mucus in patients with ABPA.

Allergic bronchopulmonary aspergillosis (ABPA) is a complex immunologic syndrome complicating the course of various pulmonary disorders including bronchial asthma[1]. The disease was first described by Hinson et al[2] as an association of bronchial asthma with hypersensitivity to Aspergillus fumigatus. It manifests clinically with uncontrolled asthma, hemoptysis and systemic manifestations such as fever, weight loss, malaise and fatigue[1]. The interest in this entity stems from the fact that that the condition responds remarkably to glucocorticoid therapy, and early detection and treatment may eliminate the risk of progression to end-stage fibrotic lung disease[3]. Radiologically, it is characterized by central bronchiectasis (bronchiectasis limited to the medial half of the lung, at a point midway between the hilum and the chest wall) with distal tapering of bronchi and recurrent episodes of mucus plugging[4]. The bronchial mucus plugging in ABPA is generally hypodense; however, the mucus secretions can also have high attenuation computed tomography (CT) values[5]. High attenuation mucus is said to be present if the mucus plug is visually denser than the normal skeletal muscle (Figure 1). 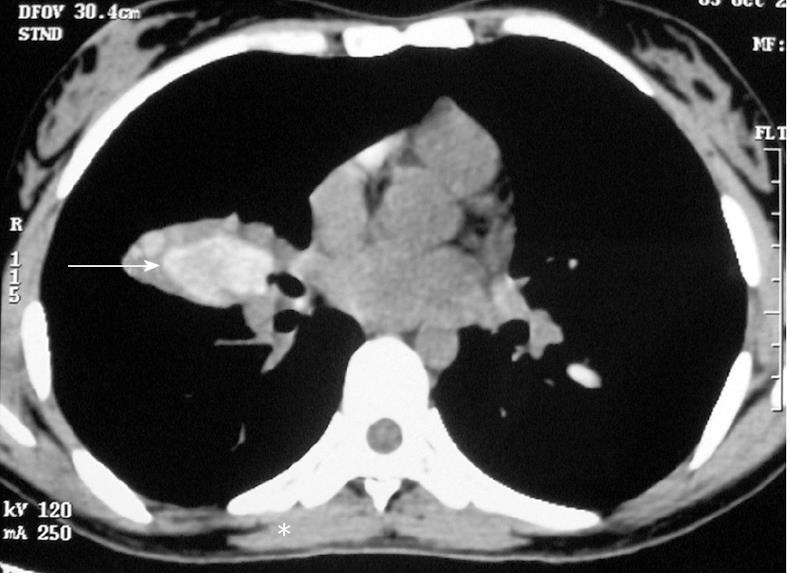 The occurrence of high attenuation mucoid impaction in ABPA was first described by Goyal et al[6] in 1992, and it is likely that this radiological diagnosis was missed previously[7] and even after 1992[8,9]. Subsequently, Logan et al[10] described the occurrence of high density mucus plugs in 4 out of 14 (28%) patients with ABPA over a 4 years period. Following this, numerous reports have described the finding of high attenuation mucus in ABPA[11-15]. Currently, the presence of hyperdense mucus is considered a characteristic, if not a pathognomonic, finding in ABPA[16]. The constituents of hyperdense mucus are not entirely clear. The hyperattenuating mucus probably has a basis similar to that seen in patients with allergic fungal sinusitis[17,18]. An initial theory proposed the role of hemosiderin occurring within inspissated mucin as responsible for the areas of increased signal intensity. This was disputed by Zinreich et al[19] who were unable to identify increased hemosiderin within typical allergic fungal mucin. The hyperattenuating mucus plugging seen on CT scans is currently attributed to the presence of calcium salts and metals (the ions of iron and manganese)[20] or desiccated mucus[21].

The clinical significance of high-attenuation mucoid impaction in ABPA was hitherto unknown. However, in a recent study, we screened 755 patients with bronchial asthma for ABPA using the Aspergillus skin test. Two hundred and ninety one patients (38.5%) were found to be aspergillus skin test positive, and ABPA was diagnosed in 155 patients. In a multivariate analysis, both the severity of bronchiectasis and high-attenuation mucus predicted relapses of ABPA (OR: 1.23, 95% CI: 1.13-1.42 and OR: 3.61, 95% CI: 1.23-10.61, respectively). However, failure to achieve long-term remission was influenced only by the severity of bronchiectasis but not by hyperdense mucus (OR: 1.55, 95% CI: 1.29-1.85 and OR: 3.41, 95% CI: 0.89-13.1, respectively)[14]. The exact reason why hyperdense mucus is associated with recurrent relapses remains unclear but one reason may be that the mucus is more impacted, and the higher attenuation points to a more inspissated type of mucus. It is also probable that it defines a subgroup of patients with more severe inflammation. Recently, interleukin-10 promoter and surfactant protein polymorphisms have been associated with genetic susceptibility to ABPA[22,23]. It may well be hypothesized that patients with hyperdense mucus have specific genetic alterations that lead to formation of high attenuation mucus, and the genetic abnormalities dictate a disease with more severe inflammation and poorer outcomes. However, more research is needed to investigate the exact reason for this association.

High attenuation mucus also has an important connotation in patients with cystic fibrosis (CF). Unlike asthma, recognition of ABPA in CF is difficult as ABPA shares many clinical characteristics with poorly controlled CF lung disease without ABPA. Wheezing (due to intercurrent infections), transient pulmonary infiltrates, bronchiectasis and mucus plugging are common manifestations of CF-related pulmonary disease with or without ABPA[3]. The finding of hyperdense mucus with CT in patients with CF suggests that the lung disease is due to ABPA rather than CF per se[15].