Emery dreifuss muscular dystrophy (EDMD) is a rare genetic syndrome consisting of tendon retractions, progressive muscle atrophy and cardiac involvement. We report a case of an obese patient affected by the familial X-linked form in which a pericallosal lipoma was found during investigation for a suspected acute vasculopathy. To date, EDMD has never been associated with cerebral lipomas and the X-linked form was never considered to be involved in lipodystrophic syndromes or non-muscular conditions. Our case confirms the variable expressivity of the disease and suggests a possible role of Emerin in the intranuclear regulation of signals for adipocyte cell differentiation.

Core tip: To date, emery dreifuss muscular dystrophy has never been associated with cerebral lipomas, and the X-linked form was never considered to be involved in extra-muscular syndromes. We presented a case of a patient affected by the X-linked form with a particular adipose tissue distribution and a cerebral and spinal lipoma, thus suggesting a possible role of Emerin in the intranuclear regulation of signals for cell differentiation, or in lipidic intracellular dysmetabolism when absent.

Emery dreifuss muscular dystrophy (EDMD) is a rare genetic syndrome described for the first time in 1966 after studying families with slowly progressive muscular dystrophy compared to the Duchenne-type[1]. It belongs to the group of nuclear envelopathies, defects in proteins that make up the nuclear envelope. However, even when included among the subgroup of laminopathies, not all the pathogenic variants in EDMD show defects in lamins. Specifically, in the X-linked EDMD variant, the protein Emerin, normally ubiquitously expressed on the nuclear membrane, is absent in 95% of individuals[2]. This form has a similar clinical picture compared to the autosomal dominant variant (involving Lamin A/C)[3], although not exactly the same, and is characterized by joint contractures (usually the first sign), slow and progressive muscle weakness (appearing first in AD variants), and cardiac involvement with arrhythmias and dilated cardiomyopathies[4]. Most of emerinopathies are null variants, but the phenotype may show intra-familial variability. Nevertheless, in contrast to mutations in the Lamin A/C gene, XL-EDMDs are not associated with Dunnigan-type familial partial lipodystrophy nor with cerebral involvement, including the occurrence of intracranial lipomas[5].

A 27-year-old man with Emery-Dreifuss muscular dystrophy presented at E.D. three hours after the onset of objective vertigo, followed by painful left arm weakness. He was from a family with four brothers affected by the X-linked form of the disease, due to the 130 C > T (Q44X) non-sense mutation in the exon 2 of the EMD gene. He was obese, with a particular accumulation of facial and neck adipose tissue. He was pharmacologically treated with ramipril, bisoprolol and apixaban for cardiac rhythm disorders, monitored with a loop recorder reveal. His medical history revealed several episodes of aberrant intraventricular conduction followed by SVPT, with isolated episodes of bradycardia and atrial ectopic beats. Echocardiograms had shown bi-atrial and LV enlargement. Muscular involvement was moderate, with deterioration of medial head of gastrocnemius, semimembranosus and, although mildly, lateral head of gastrocnemius, vasti, adductor magnus and long head of biceps femoris. No clear deformities or contractures were evident, in contrast to the patient’s two affected younger brothers and an affected first-grade cousin.

The clinical exam at the E.D. showed a left arm downward drift associated with local joint pain. The patient was alert, oriented and cooperative, and the thoracic and abdominal clinical evaluation showed normal findings. Suspecting an acute vasculopathy, he underwent an urgent head NCCT that revealed the presence of a left-sided hypodense peri-callosal curvilinear lesion (Figure 1). No clear cerebral ischemic signs were observed. Further CT Angiography showed the perilesional course of pericallosal arteries below the rostrum and the genu of the corpus callosum, where both were pushed to the right side of the lesion and upward, resulting (above the lesion) in a correspondence between the body and splenium of the corpus callosum (Figure 2). The left artery narrowed progressively when compared to the contralateral. Furthermore, the exam ruled out vascular obstructions. The scan at thoracic level revealed a lesion with similar density and characteristics at the T1-T2 level, posterior to the cord and occupying the extradural space (Figure 3) with apparent dural impression. Then, the patient was admitted at the ward and was subjected to an MRI the next day, which did not show diffusivity alterations, thus definitely excluding areas of ischemia. Along the pericallosal region from rostrum to splenium, the lesion described in the CT appeared hyperintense at T1-W and long TR sequences, and hypointense at fat suppression sequences, without contrast enhancement and with clearly defined limits (Figure 4). These findings confirmed the initial hypothesis of a complete, left-sided, curvilinear pericallosal lipoma. Callosal aplasia was not observed. The day after, the patient’s pain was subsiding with painkillers, while his weakened arm had completely recovered, allowing him to be discharged to his home. 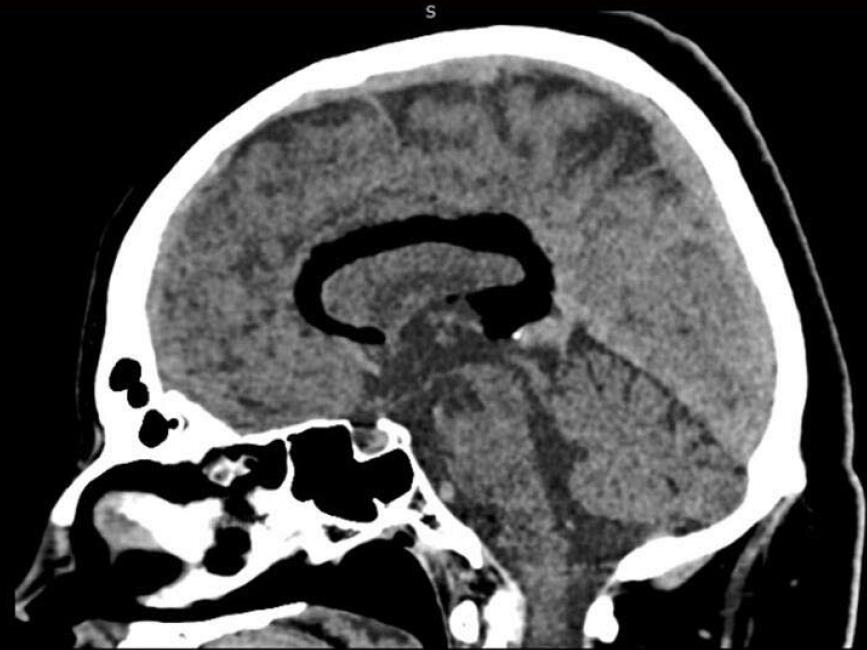 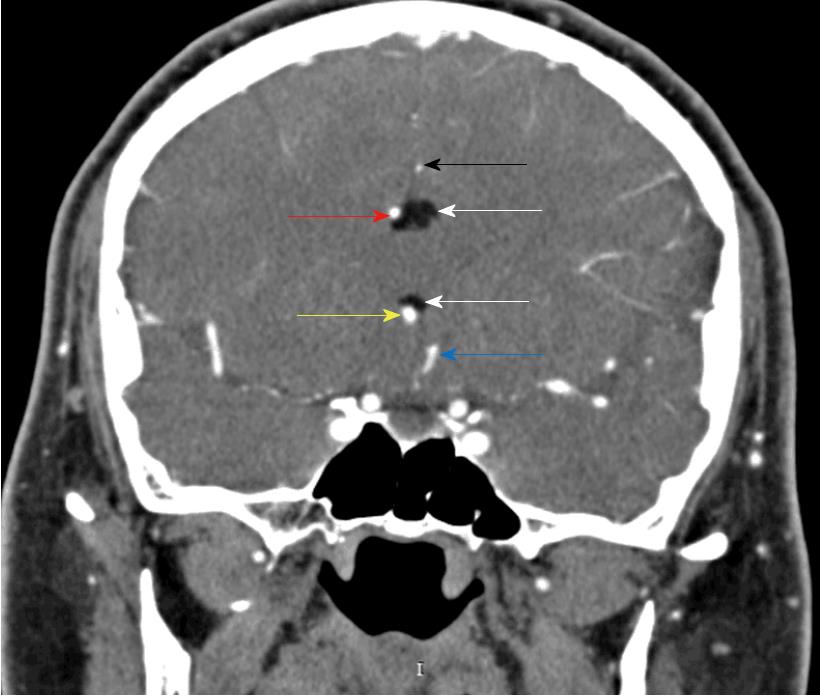 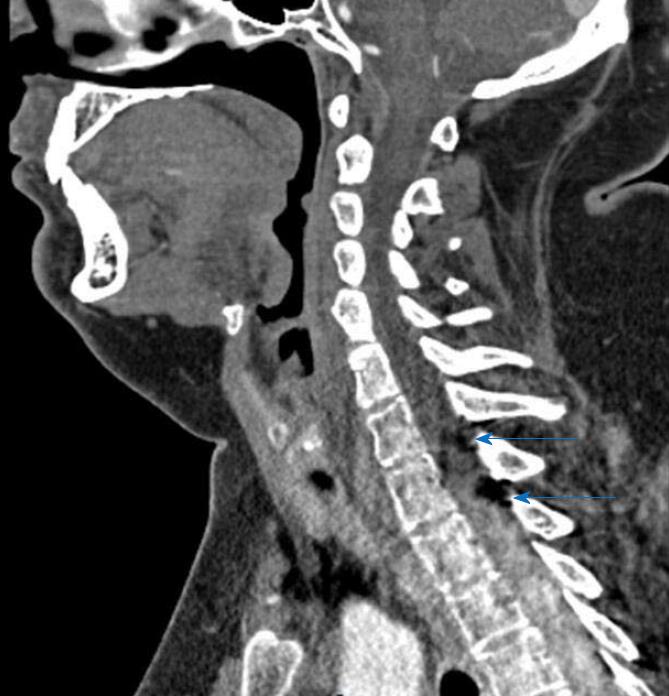 Figure 3 Sagittal CT angiography. Shows two hypodense images compatible with lipomas within the extradural compartment, dorsal to the cord at the T1-T2 level. 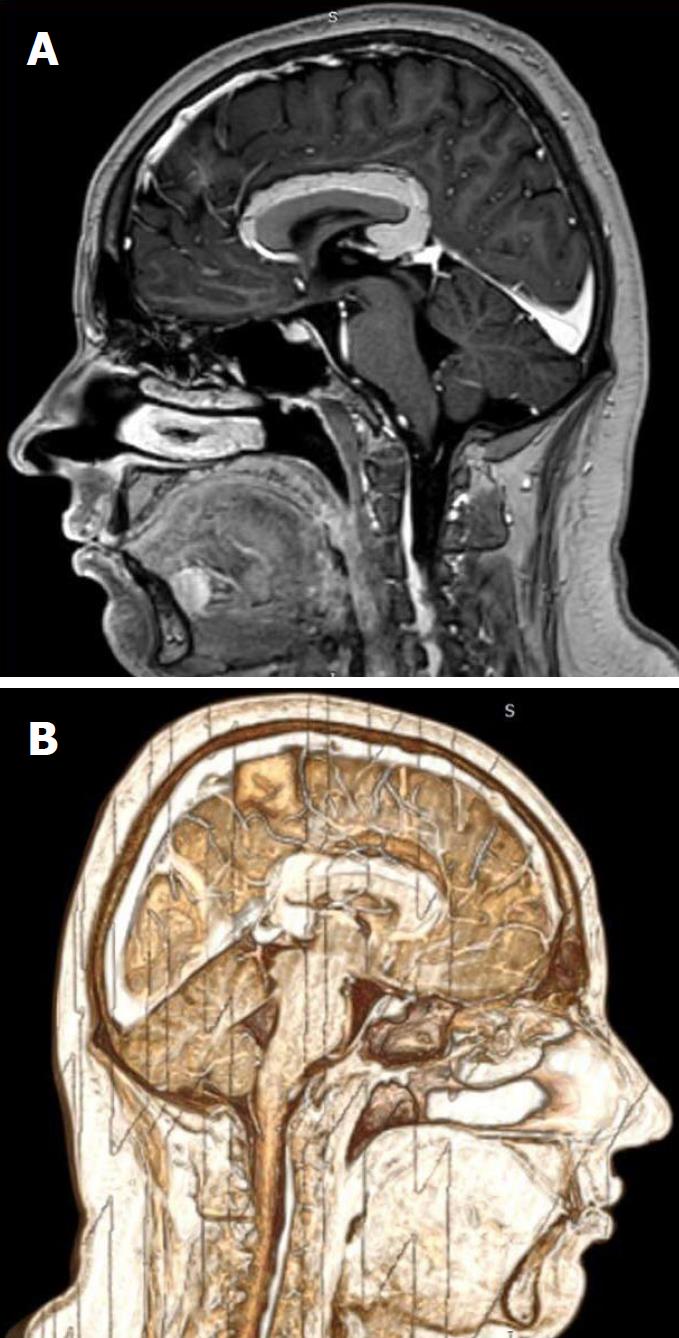 EDMD is a rare genetic disease with an estimated prevalence of 0.13:100000-0.2:100000 overall[6], and of 1:100000 inhabitants for the XL-EDMD variant[7]. We reported a case of XL-EDMD in a family of five members affected, and a sister carrier of the same mutation c.130 C < T (pQ44X), in exon 2 of the EMD or STA genes. This mutation inserts a stop at codon 44, causing early translation termination of Emerin, resulting in C-terminal truncation and in vivo destabilization with complete loss[8].

Emerin is a type 2 integral membrane protein of 29-kDa, a resident of the inner nuclear membrane (INM) that is closely linked to lamin proteins, components of the nuclear lamina. It has been observed that in cells lacking a functional A-type lamin gene, as is observed in AD-EDMD, Emerin is largely mislocalized to the peripheral endoplasmic reticulum (ER). It has been postulated that the nuclear lamina plays a crucial role in limiting the segregation of INM proteins to the outer nuclear membrane and peripheral ER[9]. The tissue-specificity associated with laminopathies may be explained by a dysfunction in specific processes which take place in the ER, like cholesterol and fatty acid synthesis, due to the accumulation of proteins that are no longer contained within the nuclear envelope. This would result in aberrant adipocyte development and lipodystrophic diseases, as can be observed in Dunnigan-type familial partial lipodystrophy associated with mutations in the lamin A/C gene, characterized by selective loss of subcutaneous fat from the limbs and trunk, and its accumulation in the face and neck[10]. Similarly, muscles and myocardium may suffer from an impaired Ca2+ release in the sarcoplasmic reticulum during contraction.

An alternative hypothesis suggests that the accumulation of nuclear envelope proteins in the ER could promote alterations in intracellular signaling pathways with effects on gene expression and cell survival[11]. Different from laminopathies, Emerin in XL-EDMD is truncated at the C-terminus and is not detectable in the nuclear membrane. Thus, even if it is supposed to result in a more soluble form in vitro[12], the pathogenetic theory of accumulation seems less consistent.

Our patient showed a particular obese habitus, with accumulation of adipose tissue in the neck and facial districts with disproportionally leaner limbs. Evaluating the clinical course and the exams performed, the pericallosal and the spinal lipoma may be considered incidental findings, whereas the patient’s symptoms could be related to an initial painful contracture that subsided after painkillers. Pericallosal are rare, fat-containing lesions, generally asymptomatic and accounting approximately for 0.1%-0.5% of all intracranial lesions[13]. Curvilinear and tubulonodular types have been described. Tubulonodular lipomas are considered more frequently associated with corpus callosum malformations[14], even if the series of Yilmaz et al[15] showed a stronger association with curvilinear lipomas. Our case is aligned with the classical association, which does not show clear morphological alterations in the corpus callosum. This may be important, since lipomas are considered as congenital malformations, and more often occur with cortical and callosal dysplasias and vascular malformations[16]. Nevertheless, Zettner and Netsky[17] pointed out that callosal dysgenesis are not the cause of lipomas, believing rather that the two conditions derive from two distinct pathological processes, namely a meningeal mal-differentiation for lipomas and dysraphism for callosal abnormalities[17,18].

Finally, it is now clear that LEM domain proteins (such as LAP2B and Emerin) can interact with transcriptional regulators, playing a non-structural role in gene regulation. In vitro models speculate that Emerin binds A and B-type lamins as well as retinoblastoma (RB) proteins, which regulates the entry into S-phase and terminal differentiation, and at least four transcription factors, including germ-cell-less (GCL), BCL2-associated transcription factor (BTF) and barrier-to-autointegration factor (BAF)[19]. After binding Emerin, GCL acts on DP3-E2F by repressing its dependent gene expression, while BTF acts as a cell-death-promoting transcription repressor after binding a DNA-specific partner. BAF can bind directly to both Lamin A and Emerin, blocking GCL binding to Emerin, or can directly repress CRX-dependent genes in vivo after binding to double-stranded DNA. In muscle cells, Emerin binds several actin-binding proteins, including a nuclear isoform of Spectrin. This reinforces the lamina network by providing a further link between actin and protein 4.1, which is implicated in nuclei reconstruction after mitosis[19].

To date, EDMD has never been associated with cerebral lipomas, and the X-linked form was never considered to be involved in lipodystrophic syndromes or non-muscular conditions. Our case confirms the variable expressivity of the disease, and adds the suggestion of a possible role of Emerin in the intranuclear regulation of signals for adipocyte cell differentiation or lipidic intracellular metabolism in particular cell groups that are subject to specific and variable stimuli throughout a lifetime.

A head NCCT revealed the presence of a left-sided hypodense peri-callosal curvilinear lesion; a CT Angiography ruled out vascular obstructions, while the thoracic scan showed two posterior extradural hypodense lesions at T1-T2. The MRI did not show diffusivity alterations: the curvilinear peri-callosal lesion appeared hyperintense in T1-W and hypointense at fat suppression sequences, without contrast enhancement, thus confirming the lipoma.

Envelopathies: defects of proteins making up the nuclear envelope.

A particular obesity pattern associated with cerebral-spinal lipomas may be related to the same gene defect in patients affected by the Emery-Dreifuss muscular dystrophy X-linked variant. In our case, lipomas may be considered incidental findings, whereas the patient’s symptoms could be related to an initial painful contracture, which is a typical hallmark of the disease.