Human prion disease is a rare, uniformly fatal neurodegenerative disorder.Its precise pathogenesis is obscure. The clinical profile of the disease differs among its various forms. There are no definitive diagnostic tests (except for brain biopsy) or proven treatment. To increase the clinical diagnostic sensitivity and specificity, three laboratory tests, including electroencephalogram, cerebrospinal fluid testing for 14-3-3 protein, and magnetic resonance imaging, are currently used. Additionally, proton magnetic resonance spectroscopy, positron emission tomography and single photon emission computed tomography can provide interesting and novel results in the research of human prion disease.

Human prion disease is a rare, uniformly fatal progressive neurodegenerative disorder, characterized by the deposition of an abnormal prion protein (PrP) in the central nervous system[1]. The most common form of human prion disease is Creutzfeldt-Jakob disease (CJD) and the whole nosological spectrum has been further divided into four categories. (1) Sporadic CJD (sCJD) arising from either a spontaneous PrP gene mutation or from a stochastic PrP structural change to the abnormal form. The host codon 129 genotype and the molecular strain of the deposited prion agent affect the phenotype[1,2]; (2) Iatrogenic prion disease, caused by infection (prion transmission) from medical (blood transfusion, human growth hormone) or surgical (corneal, dura mater grafts) procedures[1,2]; (3) Variant CJD (vCJD) which is causally linked to bovine (cattle) spongiform encephalopathy prion agent[1-3]; and (4) Inherited or genetic prion disease, caused by autosomal dominant PrP gene mutations (such as E220k, P102L) or insertions (such as ins144bp, ins24bp) on human chromosome 20[1,2]. The clinicopathological spectrum is further influenced by polymorphisms at codon 129 of the PrP gene[1-3].

The precise pathogenetic mechanism underlying the neurological illness is at present obscure. The clinical profile of the disease differs among its various forms. Early ante-mortem diagnosis is challengingly difficult and no definitive diagnostic tests (except for brain biopsy) or proven treatment modalities are available. Most importantly, other potentially treatable diseases including infectious, inflammatory, autoimmune, toxic, and metabolic diseases should initially be excluded[1-4].

Three laboratory tests, including electroencephalogram (EEG), cerebrospinal fluid (CSF) testing for 14-3-3 protein, and magnetic resonance imaging (MRI) are currently used to increase the clinical diagnostic sensitivity and specificity[2,6,7], and have been included in the World Health Organization (WHO) diagnostic criteria for vCJD[8] and sCJD[9]. The EEG, in around two thirds of cases, may show progressive deterioration with the appearance of periodic sharp wave complexes, the absence of which does not exclude the diagnosis[1,6]. Also, these EEG complexes may be present in other conditions, such as hepatic encephalopathy, drug-heavy metals toxicity and Alzheimer’s disease, while they are absent in vCJD[1].

CSF 14-3-3 is a normal neuronal protein that is released into the CSF following neuronal damage, with no specific connection to CJD[1]. However, it shows a surprisingly high specificity and sensitivity (around 94%) to sCJD[6] and therefore it should be only valid in the appropriate clinical setting[1]. When this test is used in unselected patients with rapidly progressive dementia, false positive results can be found in 12% of them[10]. Furthermore, fatal insomnia, a rare inherited form of prion disease, does not increase the CSF levels of 14-3-3 protein, in almost all cases[11].

Over the past decade, the non-invasive nature of MRI, the improved MR sequences used[2] and the availability of clinical-imaging-neuropathological correlations[12,13], have all contributed to an increased importance of MRI in the diagnosis of human prion disease[14], and have been included in the diagnostic criteria for vCJD[8]. Additionally, proton magnetic resonance spectroscopy (MRS)[3], positron emission tomography (PET)[15] and single photon emission computed tomography (SPECT)[16] can provide interesting and novel but sometimes puzzling results in the research of human prion disease.

A symmetric high signal in the caudate and putamen is typical on fluid-attenuated inversion recovery (FLAIR) and diffusion weighted images (DWI) in sCJD[17]. More recent reports have added to the above the significance of “cortical ribbon” hyper-intensity, with a higher sensitivity to DWI[12,18] (Figure 1A and B). Nevertheless, the findings in a comprehensive, multicenter international study, strongly argue that characteristic MR lesion profiles may occur in each molecular subtype of sCJD[12]. However, in another study, no abnormality on any MR sequence was found, in 5 of 8 patients with methionine homozygotes (MM2 subtype)[19]. Although the mechanism underlying the MR signal change is controversial[2], a recent small study found that apparent diffusion coefficient (ADC) values, decrease with increasing spongiform change (P < 0.001) and PrP deposition (P = 0.003) in deep gray matter[13] and increased signals in DWI are characterized by reduced ADC values, which quantify regional water diffusion[2] (Figure 1B and C). Serial DWI has shown that the extension of high signals increases with disease progression[20,21]. In contrast, initial hyper intensity disappeared in the late disease stages[20,22]. 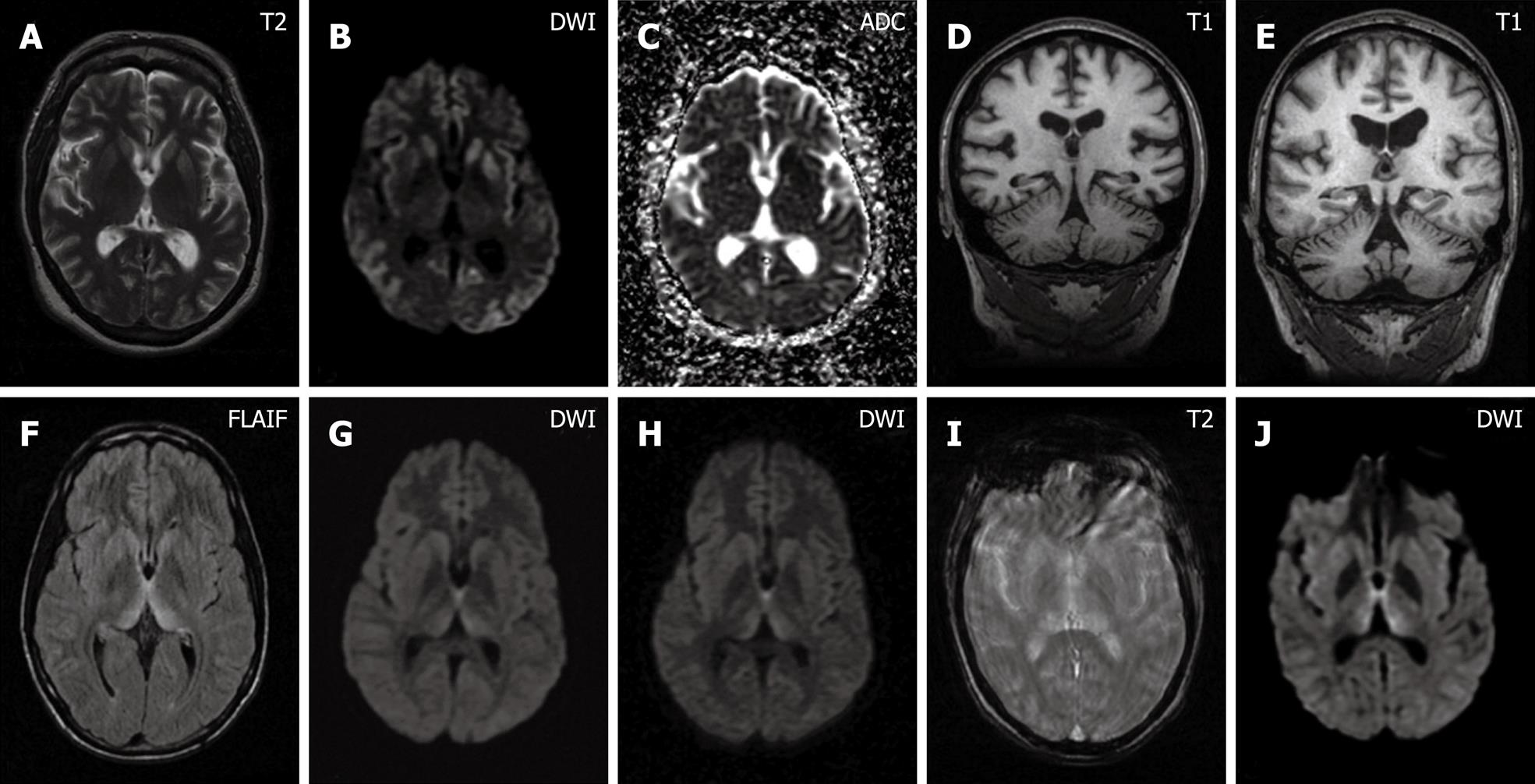 Figure 1 MRI sequences of a patient with sporadic CJD (A-C), inherited CJD (D, E) and variant CJD (F-J). A: Axial T2 weighted image shows a mild signal increase in the left putamen only; B: Axial diffusion weighted images (b = 1000) shows increased signals in both putamina and caudate nuclei (more on left than right),along with cortical hyper-intensity (“ribbons”) in both insulae as well as in the frontal, temporal and occipital cortex; C: Apparent diffusion coefficient map demonstrates reduced signals in the areas which were hyperintense on the DWI confirming restricted water diffusion in these regions; D: The coronal T1 MRI shows supratentorial cortical and cerebellar atrophy in an inherited CJD case; E: MRI shows marked supratentorial atrophy with enlarged lateral ventricles accompanying cerebellar atrophy with prominent enlargement of the fourth ventricle in another case with inherited CJD; F: Axial fluid-attenuated inversion recovery image reveals the “hockey stick” sign, with hyper-intensity in the dorsomedial thalamic nuclei and pulvinar bilaterally in a patient with vCJD; G: Axial DWI (b = 1000) also shows increased signals which are less marked than on FLAIR image; H: DWI acquired after 1 mo demonstrates progression of the signal change in the thalami; I: Limited diagnostic value of axial T2 image is degraded by movement in a patient with vCJD; J: DWI (b = 1000) shows a high signal in the dorsomedial thalamic nuclei and pulvinar in the same case as above (All the above images have been reproduced and adapted by permission from BMJ Publishing Group Ltd. Macfarlane RG, Wroe SJ, Collinge J, Yousry TA, Jäger HR. Neuroimaging findings in human prion disease. J Neurol Neurosurg Psychiatry 2007; 78: 664-670).

In iCJD, incubation periods range from months to up to 30 years and the imaging patterns observed in recipients seem to differ according to the type of donor materials[2]. In human growth hormone recipients, bilaterally symmetric high signals can be observed in caudate head and putamen[2,23]. Similar findings have been reported in case reports of dura mater recipients[24]. However, atrophy is the only imaging finding in larger series of dural grafts[25]. In prion infection due to blood transfusion from asymptomatic donors who later developed vCJD, the pre-mortem MRI is normal[2] or the pulvinar sign becomes evident as the disease clinically progresses[26].

In vCJD, bilateral symmetric high pulvinar signal, as seen on T2 weighted imaging (T2WI), FLAIR (most sensitive) and DWI has been included in the WHO diagnostic criteria[8]. When this pulvinar sign is associated with hyper-intensity in dorsomedial thalamic nuclei, the “hockey stick” sign develops[27] (Figure 1F-H). The above mentioned pulvinar or hockey stick signs are the most consistent MRI findings in any human prion disease, possibly because only one molecular strain of the disease has been found in vCJD[3]. Finally, in confused or agitated patients with their standard MR sequences degraded by movement artefact, only DWI can provide important diagnostic data[2] (Figure 1I and J).

In inherited prion disease, MR changes are non-specific. However, imaging is required to exclude other prion and non-prion diseases. Imaging reports indicate normal findings[5,28], cortical or cerebellar atrophy or decreased basal ganglia signals[28] (Figure 1D and E). Also, there is no evidence suggesting the most useful MR sequences in the diagnosis of this inherited disorder[2].

This non-invasive method is used to assess the spectra of several brain metabolites, such as N-acetylaspartate (NAA), creatine and myo-inositol (MI) and to measure these compounds in both absolute values and ratios, in specific brain regions[2,4]. Considering the NAA a neuronal marker[29], and MI a glial marker[4], proton MRS used as an additional tool along with other MR sequences (FLAIR, DWI, T2WI) is of value in the study of human prion disease. Reduced absolute levels or ratios of NAA and increased MI values, have been reported in sporadic[4,30], variant[30,31], iatrogenic[23] and inherited[32] CJD. The pattern of these metabolic changes on MRS matches the MRI findings on FLAIR, T2[30] and DWI[14]. Nevertheless, important questions still remain to be answered. A recent prospective MRS study[4] showed that the most intense metabolic changes are observed in the thalamus and cerebellum of prion patients (sCJD), while the striatum and cerebral cortex are less affected, despite the existence of positive T2 and DWI findings.

At present, the high cost of PET seems to outweigh the benefit obtained in the investigation of human prion disease. In general, PET reveals generalized hypometabolism that is correlated with histological neuronal loss and astrogliosis[15,33] along with spongiform changes[33]. However, this hypo-metabolism is more pronounced in the cerebellum and cortex than in the thalamus and striatum[15], unmatching the distribution of lesions seen on MRI.

Accordingly, widespread hypoperfusion has been demonstrated using SPECT in all forms of human prion disease[2]. The majority of sCJD patients reveal decreased cerebral perfusion, including the occipital cortex, cerebellum or the entire hemisphere[16]. Also, more regional changes in perfusion with SPECT can be detected in early stages of the disease than MRI changes[34].

As different types of disease arise, changes in the neuroimaging patterns of human prion disease continue to puzzle clinicians and researchers alike.

At present, the most consistent MRI change is the pulvinar sign in vCJD patients. When the dorsomedial thalamic nuclei are involved, the “hockey stick” sign provides additional clues[3,8,27]. Since bilateral high signals are observed in the caudate and putamen, and “cortical ribbon” hyper-intensity is found on DWI of sCJD patients[12,17,18], the diagnostic sensitivity of MRI is further augmented. Newer imaging techniques, such as proton MRS and SPECT seem to provide useful data for identifying the patterns in all forms of human prion disease[23,31,32].

Future research should eventually aim at studying the increasing number of “probable” prion cases, through multicenter international studies, utilizing combined imaging modalities, such as serial DWI with MRS, SPECT with MR perfusion imaging and MRI with in vivo PET probe to label prion plaques[2,4,33]. Hopefully, this perspective will elucidate some of the debatable issues presented and the “mist” will start to resolve.