The left atrium (LA) acts as a modulator of left ventricular (LV) filling. Although there is considerable evidence to support the use of LA maximum and minimum volumes for disease prediction, theoretical considerations and a growing body of literature suggest to focus on the quantification of the three basic LA functions: (1) Reservoir function: collection of pulmonary venous return during LV systole; (2) Conduit function: passage of blood to the left ventricle during early LV diastole; and (3) Contractile booster pump function (augmentation of ventricular filling during late LV diastole. Tremendous advances in our ability to non-invasively characterize all three elements of atrial function include speckle tracking echocardiography (STE), and more recently cardiovascular magnetic resonance myocardial feature tracking (CMR-FT). Corresponding imaging biomarkers are increasingly recognized to have incremental roles in determining prognosis and risk stratification in cardiac dysfunction of different origins. The current editorial introduces the role of STE and CMR-FT for the functional assessment of LA deformation as determined by strain and strain rate imaging and provides an outlook of how this exciting field may develop in the future.

Core tip: Recent advances in speckle tracking echocardiography (STE) and cardiovascular magnetic resonance myocardial feature tracking (CMR-FT) allow a detailed quantification of left atrium (LA) dynamics in terms of strain and strain rate imaging. Corresponding imaging biomarkers are progressively found to have the potential to predict the outcome in a variety of cardiovascular disease states. The current editorial introduces the role of STE and CMR-FT for the functional assessment of LA deformation and provides an outlook of how this exciting field may evolve in the future.

Heart failure of different origins including ischemic aetiology remains a major determinant of mortality[1]. Left atrial (LA) enlargement has been shown to be a sensitive parameter for the prediction of adverse cardiac events[2,3]. The interplay between LA enlargement and atrial remodelling in the development of atrial fibrillation (AF) has been demonstrated[4,5]. However, the pure relation of LA pathology to its enlargement within different diseases may oversimplify cardiovascular physiology. It is important to note that the LA does not merely represent a stiff chamber, which passively transports blood from the pulmonary veins to the left ventricle (LV), but a more complex and active chamber. Its role should rather be described as a dynamic modulation of LV filling by functioning as a reservoir, conduit and contractile booster pump[6,7]. There have been tremendous advances in terms of our ability to characterize all three elements of atrial function using non-invasive imaging techniques[8]. Recent advances include LA deformation analysis using speckle tracking echocardiography (STE)[9,10] as well as cardiovascular magnetic resonance myocardial feature tracking (CMR-FT)[7,11]. Corresponding imaging biomarkers are progressively found to have the potential to predict the outcome in a variety of cardiovascular disease states[6]. The current editorial introduces the role of STE and CMR-FT for the quantification of LA dynamics as expressed by strain and strain rate (SR) imaging and provides an outlook of how this exciting field may evolve in the future. 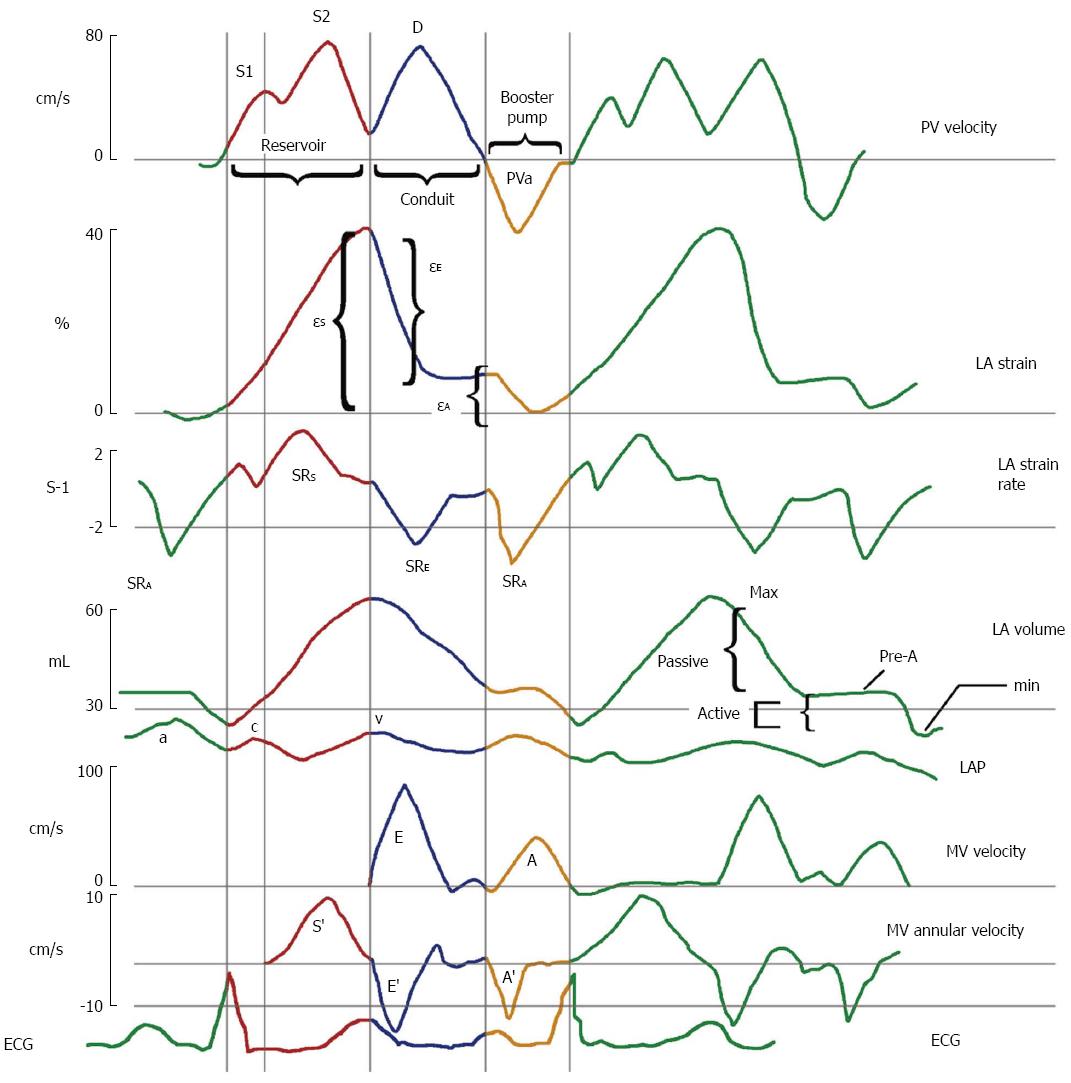 LA deformation quantification comprises challenges that are not present when dealing with ventricular strain and SR imaging. These include the insertion of pulmonary veins and the presence of the LA appendage, the thin LA wall and the variable LA geometry[7]. Notwithstanding these facts, 2D STE and CMR-FT have both shown good performance and reproducibility of LA deformation analysis[7,14]. However, using two-dimensional representations of 3D structures may oversimplify the complex LA anatomy. Through-plane motion or reduced STE imaging quality with poor imaging windows can affect LA deformation analysis and may be difficult to correct. Recent advances in STE provide three-dimensional imaging that eliminates the effects of through-plane motion in patients with sufficient imaging windows and may allow the comprehensive analysis of global and regional LA strain[15,16]. At the present time, similar developments for CMR-FT based on three-dimensional imaging have not yet been introduced.

The wide availability and high temporal resolution of echocardiographic real time images are advantages of STE. However, due to the far-field location of the LA, the main drawback of STE is its dependency on high quality images that frequently cannot be guaranteed in patients with limited acoustic windows[14].

CMR-FT allows tracking of tissue voxel motion directly from standard steady-state free precession (SSFP) cine CMR images and derivation of myocardial deformation (Figure 2) without the need for additional sequence acquisition as compared to myocardial MR Tagging[7]. Therefore, this technique appears particularly applicable from a clinical perspective and can be easily implemented into a running CMR laboratory. Although CMR-FT was initially validated for ventricular function analysis[21-27], its applicability has recently been extended to quantitative longitudinal LA strain and SR analysis[7]. Typically, LA endocardial borders are initially traced in the 2- and 4-chamber views at the minimum atrial volume after atrial contraction[7]. Subsequently, an automatic tracking algorithm is applied. According to STE, LA contours are divided into six segments[20] and subsequently averaged to global strain and SR indexes using a 12-segment model (six equidistant segments in the 4 and 2-chamber views). CMR-FT benefits from high quality CMR images allowing robust contouring of the thin LA myocardium. Furthermore, CMR includes the acquisition of standardised and highly reproducible imaging planes, which is particularly important in longitudinal studies with repeated measurements[28]. Future studies will need to address whether or not CMR-FT has better inter-study reproducibility than STE. On the other hand, low temporal resolution of CMR images might affect deformation analysis, e.g., the ability to accurately quantify peak strain rates[7]. Future evaluations will have to compare STE and CMR-FT regarding the analysis of LA dynamics to determine whether or not results are interchangeable between modalities or one approach should be preferred over the other. 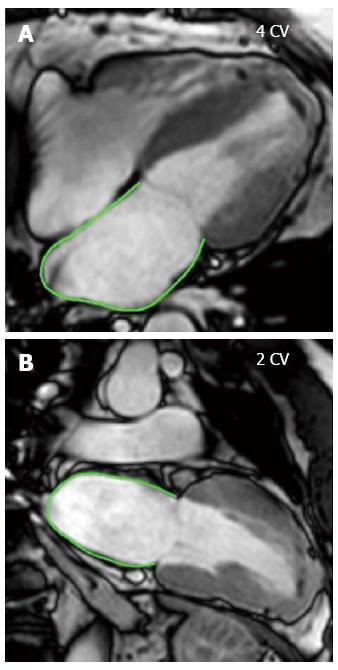 Figure 2 Cardiovascular magnetic resonance myocardial feature tracking of the left atrium in a patient with hypertrophic cardiomyopathy. Cardiovascular magnetic resonance myocardial feature tracking is performed in 4-chamber (A) and 2-chamber (B) views. Contours are based on 48 features, which are tracked throughout the cardiac cycle to generate longitudinal strain and strain rate profiles as displayed in Figure 1.
FUTURE POTENTIAL OF LA DEFORMATION QUANTIFICATION

A growing body of literature suggests to focus on the quantification of the three basic LA functions rather than on the LA volumes only: LA reservoir function has shown to closely correlate with LV filling pressures[29] and has demonstrated to be a sensitive biomarker for the prediction of adverse cardiac events independently of other measures of cardiac dysfunction in patients with heart failure[30]. Strong association between LA conduit function and recurrent atrial fibrillation after pulmonary vein isolation has been described[31]. Accordingly, there has been tremendous effort to study LA dynamics with STE. Mounting evidence suggests that impaired LA strain and SR dynamics have the potential to serve as imaging biomarkers for the prognosis and risk stratification or the decision to intervene in heart failure[32,33], hypertension[34], coronary artery disease[35], atrial fibrillation[36], valvular heart disease[20] and cardiomyopathies[37,38] (please see reviews by Hoit[6] and Viera et al[17] for in depth information).

CMR-FT has been introduced more recently[7]. However, recent studies were able to demonstrate an association of impaired LA reservoir function and the development of heart failure in the general population[39]. Impaired reservoir function as determined by volumetric indexes, strain and SR measurements is also closely related to LV fibrosis[40]. With respect to previous reports on the relevance of LV fibrosis[41], LA reservoir function may also represent a promising target for risk stratification. Furthermore, initial experiences on patients with hypertrophic cardiomyopathy (HCM) and heart failure with preserved ejection fraction (HFpEF) demonstrate impaired LA reservoir and conduit function in HCM and HFpEF[7], when compared to healthy controls. In contrast, patients with HCM exhibit increased LA booster pump function while this is decreased in HFpEF[7]. Future studies will need to investigate whether or not this might refer to a potential compensatory mechanism in HCM, as opposed to a complete impairment of LA dynamics in HFpEF[7]. LA CMR-FT has not been applied to patients with atrial fibrillation yet. Deteriorated image quality, which is frequently present in patients with atrial fibrillation, might negatively impact on CMR-FT quality. It remains to be investigated whether or not CMR-FT is feasible in patients with atrial fibrillation using both, conventional ECG-gated SSFP sequences or real-time CMR techniques[42,43], which have demonstrated improved image quality in arrhythmic patients as compared to conventional ECG-gated techniques[44].