Research Domain of This Article
Pharmacology and Pharmacy

Patients with chronic aortic dissections are at high risk of catheter-induced complications. We report a Berberine is used in traditional Chinese medicine for the treatment of congestive heart failure, hypertension, diabetes, and dyslipidaemia and has a good safety profile. We report a case of a 53-year-old sportsman referred to our hospital for the onset of fatigue and dyspnoea upon exertion after he started berberine to treat hypercholesterolaemia. An electrocardiogram showed sinus bradycardia (45 bpm), first-degree atrioventricular block, and competitive junctional rhythm. An ergometric stress test showed slightly reduced chronotropic competence and the presence of runs of competitive junctional rhythm, atrial tachycardia, and sinus pauses in the recovery. After 10 d of wash-out from berberine, the patient experienced a complete resolution of symptoms, and an ergometric stress test showed good chronotropic competence. An electrocardiogram Holter showed a latent hypervagotonic state. This is the first case report that shows that berberine could present certain side effects in hypervagotonic people, even in the absence of a situation that could cause drug accumulation. Therefore, berberine’s use should be carefully weighed in hypervagotonic people due to the drug’s bradycardic and antiarrhythmic properties, which could became proarrhythmic, exposing patients to potential health risks.

Core tip: Berberine is widely used in traditional Chinese medicine for the treatment of congestive heart failure, hypertension, diabetes, and dyslipidaemia. We report a case of marked symptomatic sinus bradycardia with competitive junctional rhythm caused by berberine, showing that berberine, due to its antiarrhythmic properties, can cause the onset of bradyarrhythmia. In this case report, we focus on the possible side effects of so-called natural medicine based on holistic, home, and herbal remedies, which is considered to be safe only because the treatment is natural. However, under certain conditions, natural medicine can lead to potential health risks in patients.

Berberine is an alkaloid from Hydrastis canadensis L., the Chinese herb Huang Lian, and many other plants. Berberine is widely used in traditional Chinese medicine for the treatment of congestive heart failure[1-3], hypertension[3], diabetes, and dyslipidaemia[4-5]. Berberine has multiple cardiovascular effects, including negative chronotropic, antiarrhythmic and vasodilatory properties[1,2] and an anti-inflammatory effect[6]. Several cardiovascular effects of berberine are attributed to the blockade of K+ channels [delayed rectifier and K(ATP)], the stimulation of Na+-Ca(2+) exchangers[2,7], and the activation of cardiac M2 muscarinic cholinergic receptors[8].

We report a brief case that shows that berberine could cause side effects under specific conditions.

A 53-year-old man was referred to the emergency room of our hospital after the onset of fatigue and dyspnoea upon exertion, with evidence of bradycardia. He was overweight and hyperlipidaemic and used to swim three times per week. His medical history was unremarkable, except that he had started berberine 6 d before to treat hypercholesterolaemia. Upon physical examination, the patient presented a normal blood pressure and oxygen saturation but an irregular heart rate of 50 bpm. He did not present signs of heart failure, and cardiac, pulmonary, and vascular examinations were normal. The electrocardiogram (ECG) showed sinus bradycardia with a heart rate of 45 bpm, first-degree atrioventricular block (PR interval of 280 ms), and a competitive junctional rhythm at 55 bpm (Figure 1). Both blood analysis and echocardiography did not show any justification for the marked bradycardia. An overdose of berberine was ruled out because the patient consumed the correct daily dose. Because berberine excretion is hepatobiliary[12], the presence of any predisposing factor for reduced excretion, such as hepatic or biliary disease, was examined and ruled out. 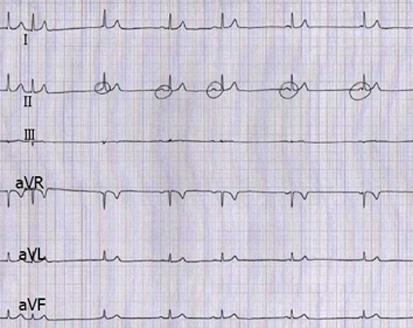 Given the bradycardic and antiarrhythmic properties of berberine, we decided to discontinue the drug, and based on the presence of dyspnoea upon exertion, an ergometric stress test was performed to evaluate chronotropic competence. A 24-h wash-out from berberine was sufficient before the test, as berberine’s half-life is less than 30 min[12]. The ergometric stress test showed slightly reduced chronotropic competence, with an increase in the heart rate from 45 bpm to 127 bpm, equivalent to 76% of the maximal prediction. The test also showed a reduction in the atrioventricular conduction delay, with a PR that reached 180 ms for a heart rate of 127 bpm. The patient presented a good functional class (the test was stopped at the second minute of the step second Bruce protocol, METs 13.5). The recovery was characterised by the presence of runs of competitive junctional rhythm; premature supraventricular beats that were occasionally aberrant, sporadically starting brief runs of atrial tachycardia (Figure 2); and a sinus pause with an RR of a maximum of 1.7 s (Figure 3A). Most likely, the patient’s symptoms were not closely related to bradycardia at rest but rather to the loss of AV synchronisation during the junctional rhythm and to the reduction in chronotropic competence during stress. 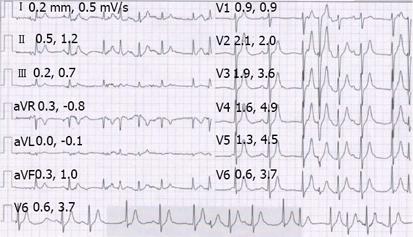 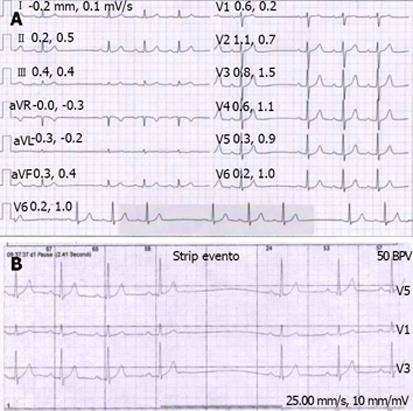 Over the following days, the patient experienced a complete resolution of symptoms and performed normal life activities and his usual sport activity (swimming) without experiencing dyspnoea or fatigue. After 10 d of wash-out from berberine, he underwent a new ergometric stress test and an ECG Holter. The ergometric stress test was normal. The ECG at rest was characterised by the presence of sinus bradycardia with a heart rate of 43 bpm and first-degree atrioventricular block (PR at rest of 280 ms), as presented several days before. However, the test presented better chronotropic competence. The test was maximal (86% of the predicted heart rate), despite the patient having reached the same workload as in the first test. The presence of first-degree atrioventricular block was consistent with a PR interval normalised at a high rate.

During the ECG-Holter monitoring, we observed a sight typical of a hypervagotonic state: bradycardial sinus rhythm with normal variation of the heart rate with a circadian cycle and physical activity (FC maximum 104, average 56, minimum 40 bpm); several nocturnal runs of sinus bradycardia at 30 bpm; and several, especially nocturnal sinus pauses, with an RR interval of 2.4 s (Figure 3B).

The patient continued to be asymptomatic and to practice his normal life and sport activities and treated his dyslipidaemia with diet.

This is the first case report that shows that berberine could present certain side effects in hypervagotonic people, even in the absence of a situation that could cause drug accumulation. Indeed, berberine has been found to have a good safety profile[2,3,5,6,9-11] in patients with pathological conditions characterised by a hyperadrenergic state, such as acute coronary syndrome[13], heart failure[14,15], diabetes[16], hypertension[17], and menopause[18]. In a murine model, it has been proven that berberine reduces plasma adrenaline and noradrenaline levels[19]. We do not know whether the bradycardic and antiarrhythmic properties of berberine are vagally mediated by the activation of muscarinic receptors, as shown by Salehi et al[8], or are not vagally mediated, as reported by Shaffer[20]. However, it is possible that in hypervagotonic people with marked sinus bradycardia, berberine’s bradycardic effect can induce the onset of competitive junctional rhythm, causing a loss of atrioventricular synchronisation, and can reduce chronotropic competence with the onset of symptoms upon exertion. Therefore, berberine’s use should be carefully weighed in hypervagotonic people due to the drug’s bradycardic and antiarrhythmic properties, which could become proarrhythmic, exposing patients to potential health risks.