Classic electrocardiographic manifestations of hyperkalemia starting with peaked symmetrical T-waves are widely recognized in daily clinical practice but little evidence is documented how quickly it can evolve in real-time.

An elderly diabetic and hypertensive male presented with acute renal failure and rhabdomyolysis. He experienced cardiac arrest with moderate hyperkalemia despite medical treatment and hemodialysis. Telemetry changes were retrospectively studied and found to have significant rhythm changes that occurred just less than 10 minutes prior to the cardiac arrest.

In hyperkalemia, telemetry rhythm can change instantaneously in a significant way. Rapidly rising potassium could be life threatening and may require more than medical treatment.

Core Tip: We present a case of acute rhabdomyolysis and renal failure where the patient experienced cardiac arrest with moderate hyperkalemia despite medical treatment and hemodialysis. This case illustrates how quickly the telemetry rhythm can change in a short period of time (9 min).

In rhabdomyolysis where massive tissue destruction could produce significant hyperkalemia, potassium levels are closely monitored and electrocardiographic changes would trigger immediate action even before the laboratory confirmation[1]. Rapidly rising potassium levels are more likely to present with cardiac rhythm changes but the pace of those changes is rarely reported in the literature.

A 76-year old male presented to emergency department with generalized weakness and encephalopathy.

His generalized weakness gradually started over a few months and recently he was getting weaker and also confused for a few days.

His past medical history was significant for hypertension, diabetes and old ischemic stroke with residual right sided weakness.

He was a non-smoker and non-drinker, and he lived in a house.

He was somnolent but arousable. He had dry mucous membranes and mild right hemiparesis which was his baseline.

Computed tomography of the brain without contrast showed no acute changes. Electrocardiography (Figure 1) did not show any classic changes associated with hyperkalemia. 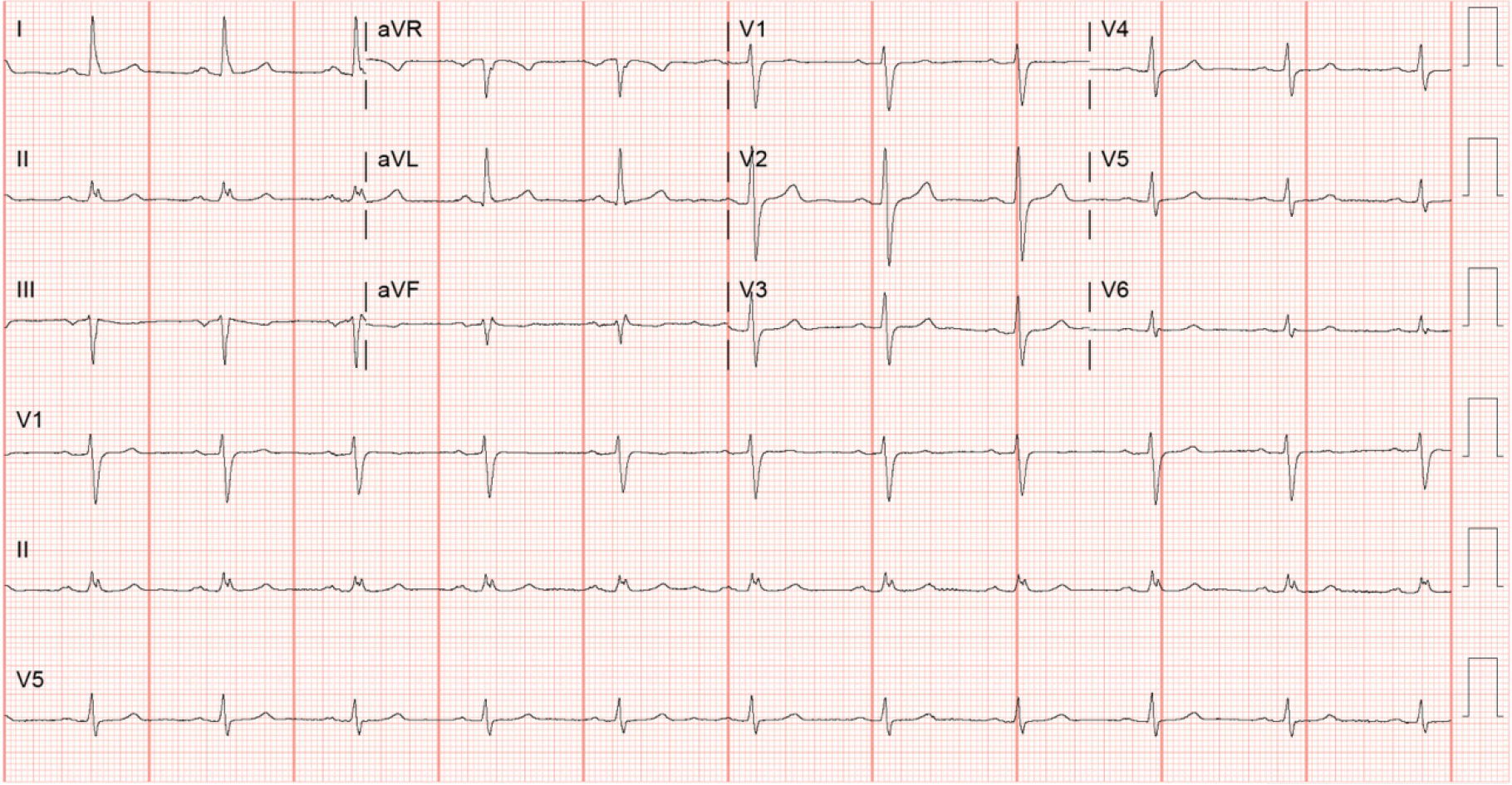 Patient was diagnosed as hyperkalemia with acute renal failure possibly due to rhabdomyolysis.

On the third hospital day, CK increased to 206297 U/L but the potassium level remained stable at 4.7 mmol/L. Six hours after the hemodialysis session of the day, the repeat potassium was 6.9 mmol/L. The telemetry rhythm strip (Figure 2A) showed no hyperkalemic manifestations. The patient was again administered calcium gluconate, dextrose, insulin and sodium polystyrene. Despite these efforts, two hours later the patient suffered a cardiac arrest with pulseless electrical activity. The patient was resuscitated and the repeat potassium level which was taken just before the cardiac arrest was 7.4 mmol/L. On review of the telemetry, significant changes associated with hyperkalemia were noted just 9 min before the cardiac arrest (Figure 2B-G). The potassium levels, creatine kinase levels and the treatments patient received are summarized in Table 1. 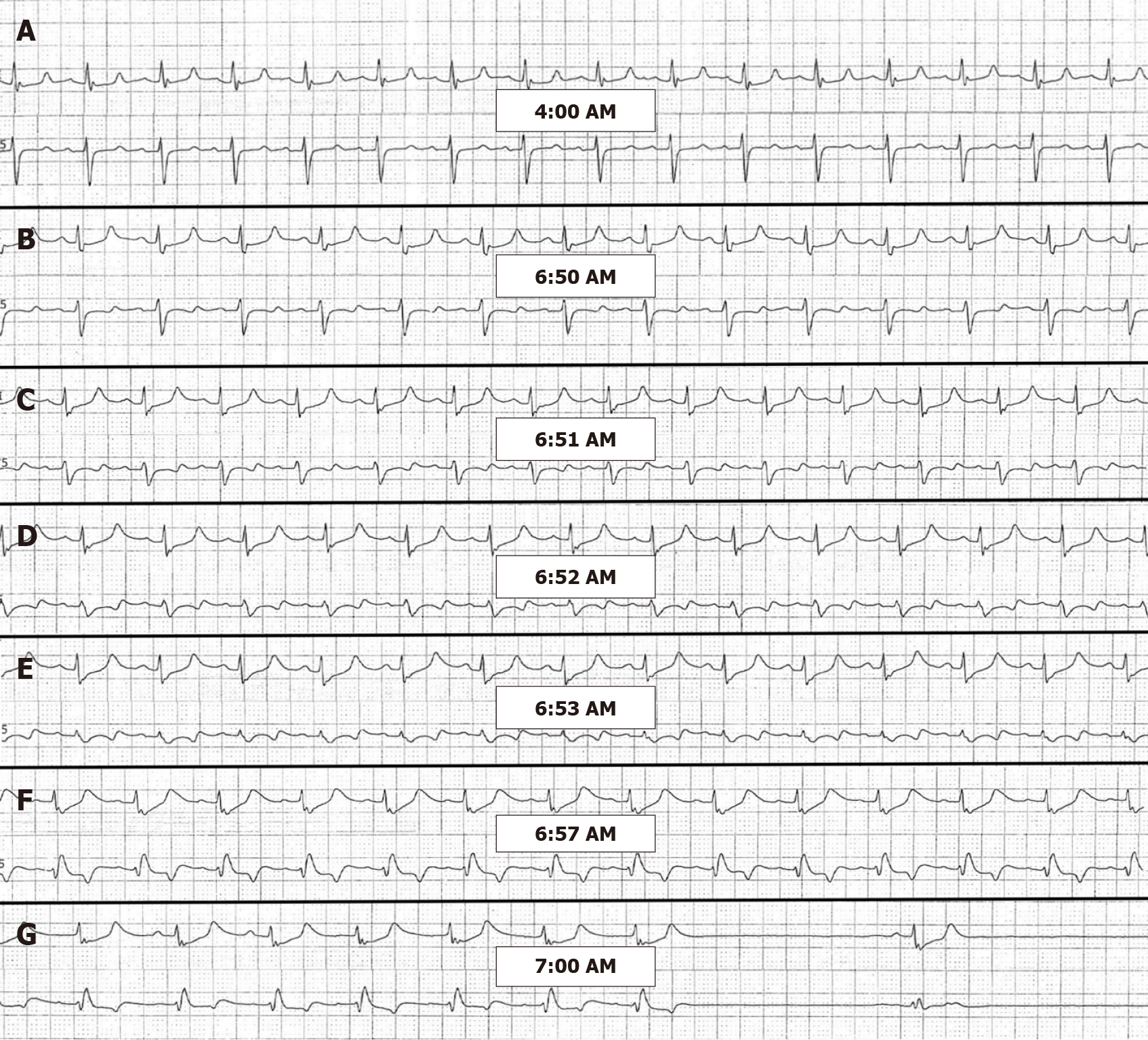 Electrocardiography following the resuscitation still showed the typical sine waves of hyperkalemia (Figure 3) with a repeat potassium level of 7.9 mmol/L. 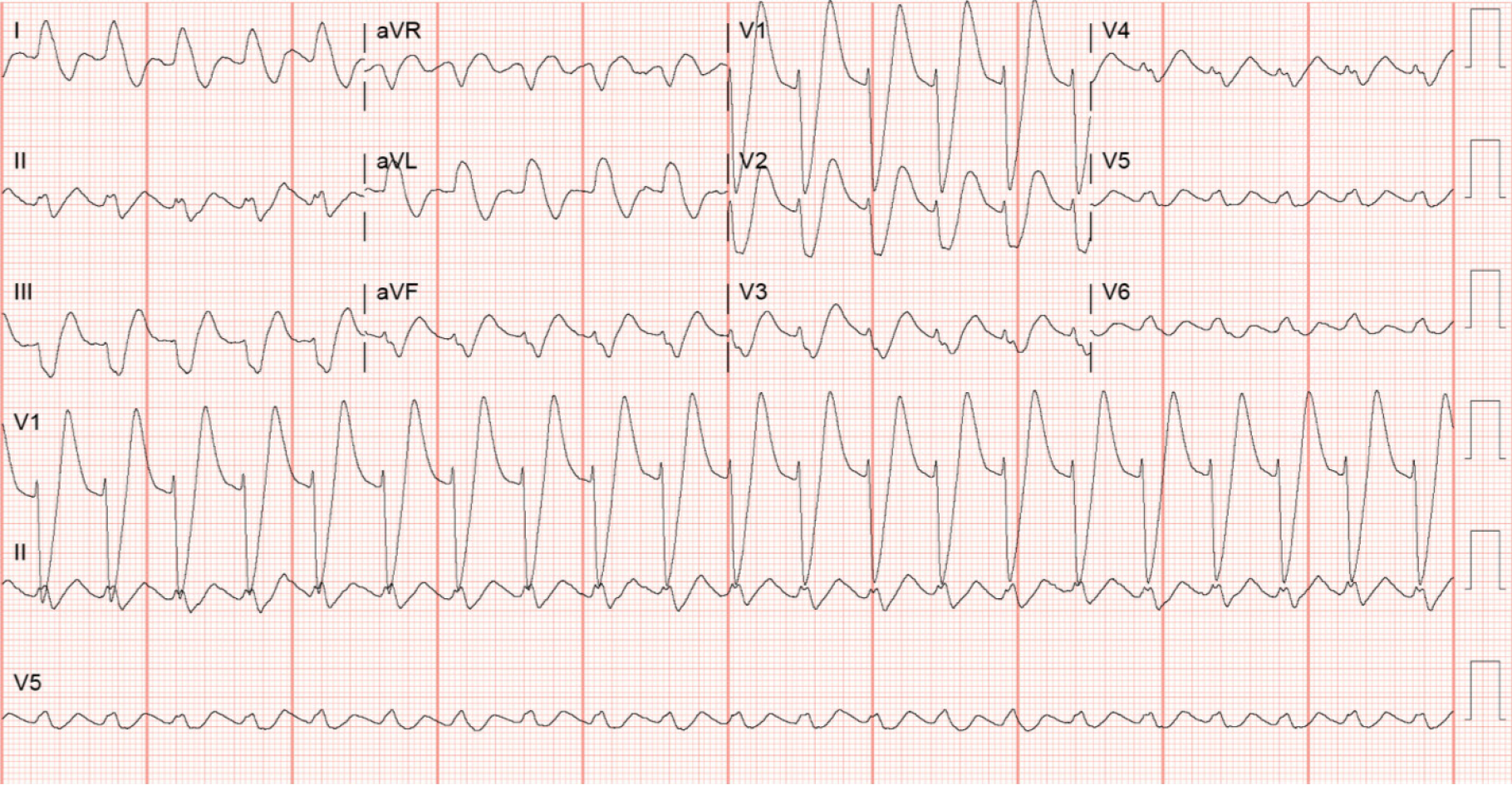 The patient was intubated and continuous renal replacement therapy (CRRT) was initiated. Despite these interventions, the hyperkalemia and metabolic acidosis continued to worsen and he eventually expired from ventricular fibrillation refractory to multiple defibrillation attempts. Repeat 12 Lead electrocardiography before the last cardiac arrest showed more pronounced sine waves from hyperkalemia with corresponding potassium level of 7.1 mmol/L (Figure 4). 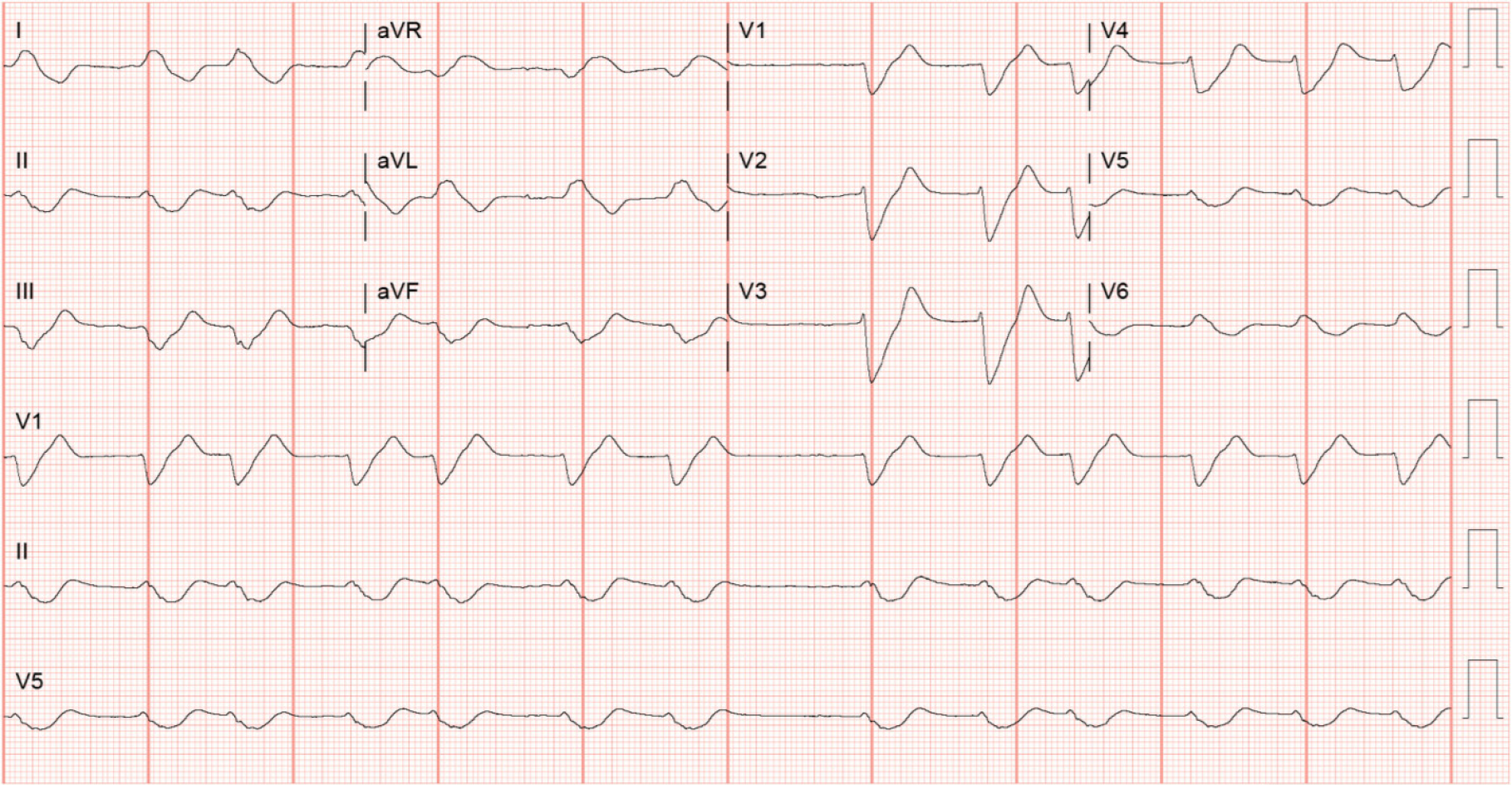 Traditionally, the electrocardiographic manifestations of hyperkalemia are sufficient to make emergent interventions indicated even prior to laboratory confirmation[1-4]. Continuous electrocardiographic telemetry is typically sufficient for monitoring cardiac rhythm. However, this patient did not demonstrate the classic peaked, symmetrical T waves on telemetry despite significant hyperkalemia. The amplitudes of T waves in lead II (Figure 2A) were less than half the height of QRS complexes and it had similar morphology on telemetry for the first three days. If a 12-lead electrocardiogram had been recorded prior to cardiac arrest, it might have shown some peaked T waves in the other non-monitoring leads.

Hyperkalemia is generally classified as moderate for the level between 6.5 mmol/L to 8.0 mmol/L and severe for the level above 8.0 mmol/L. Rapidly progressive hyperkalemia is more likely to present with cardiac rhythm changes[7]. This patient only experienced moderate hyperkalemia but suffered cardiac arrest likely because of a rapidly rising potassium. Moreover, it is also notable that the sine waves were more dramatic with potassium level of 7.1 mmol/L (Figure 4) when he eventually demised than with potassium level of 7.9 mmol/L (Figure 3) from his first cardiac arrest.

Intravenous regular insulin 5 units with dextrose can reduce the potassium level by 0.54-1.04 mmol/L at one hour[3] and a systematic review showed regular insulin 10 units could reduce the potassium by average of 0.78 ± 0.25 mmol/L in an hour[8]. The beta-2 agonist, salbutamol 10 mg nebulization, is also another potent agent that can reduce the potassium by 0.62 ± 0.09 mmol/L after 120 min of administration[9] but with the possible side effect of severe tachycardia and is limited in patients with heart failure or coronary artery disease. However, all of these treatments influence the potassium level by intracellular transfer without actually reducing total body potassium. Intravenous loop diuretics are largely ineffective in relieving hyperkalemia in oliguric patients. Oral agents that increase gastrointestinal potassium excretion, including sodium polystyrene, patiromer and sodium zirconium, have a slow onset of action. Sodium zirconium could potentially have incremental effect in treatment of hyperkalemia with potassium reduction of 0.41 mmol/L as early as 4 h after administration[10].

In addition to the above medical intervention, it is warranted to initiate renal replacement therapy in the setting of hyperkalemic emergency with rhabdomyolysis. Our patient, however, was already on daily hemodialysis with potassium level under control for two days. Nevertheless, his rebound hyperkalemia should have been managed aggressively with immediate hemodialysis rather than medical management and wait for another two hours for response.

After the medical management, potassium level should be repeated one to two hour after treatment. In our patient, it was scheduled to be repeated two hour after treatment which was reasonable. More aggressive approach to repeat the potassium at one hour or earlier might have shown worsening hyperkalemia which would have prompted more intervention.

Hemodialysis is the mainstay for the emergency management of hyperkalemia but daily intermittent hemodialysis may be inadequate as shown in this case. There is not enough evidence to suggest that continuous renal replacement therapy (CRRT) is superior to intermittent hemodialysis in management of rhabdomyolysis but CRRT has been found to remove myoglobin more effectively and is more practical in the setting of hypotension[11]. Early initiation of continuous veno-venous hemodialysis along with aggressive potassium monitoring may be necessary for severe cases of rhabdomyolysis.

Frequent 12-lead electrocardiograms in addition to the close attention to continuous telemetry monitoring are necessary for patient with hyperkalemia from rhabdomyolysis. Despite appropriate support with daily hemodialysis, this case demonstrates how rapidly acute hyperkalemia can worsen and cause an evolution of the cardiac rhythm. Timely intervention and reassessment for clinical response are critical in the management of hyperkalemia.