We present a modified implantation technique of the Perceval® sutureless aortic valve (LivaNova, London, United Kingdom) that involves the usage of snuggers for the guiding sutures during valve deployment. Both limbs of each guiding suture are pulled through an elastic tube, which is fixed with a Pean clamp, which tightens the sutures and fixes the prosthesis to the aortic annulus during valve deployment. This method proved safe and useful in over 120 cases. Valve implantation was facilitated and the need for manipulation by the assistant or the nurse was eliminated.

TO THE EDITOR
Introduction

Surgery of the aortic valve replacement (AVR) is still recommended in certain patients with aortic valve disease. Two approaches have become quite popular; surgical and trans-catheter aortic valve replacement (SAVR and TAVR, respectively), whereby TAVR is mostly reserved for elderly patients with higher surgical risk[1,2]. Although not considered in the current guidelines, the sutureless variety of SAVR has been proven to reduce the overall surgical risk by significantly reducing operative and cross-clamp times, while demonstrating lower incidence of known complications of TAVR with comparable or even better results, especially in intermediate-risk patients[3-5].

The Perceval valve (Sorin Group Italia Srl, Saluggia, Italy) is a self-anchoring, self-expanding, sutureless, surgical aortic bioprosthesis. The valve leaflets are mounted to an elastic nickel-titanium alloy stent[3]. The stent anchors the valve via six sinusoidal posts to the aortic root at the sinuses of Valsalva, while the valve prosthesis seals the left ventricular outflow tract (LVOT) through an intra-annular and a supra-annular sealing ring. Correctly positioned, the leaflets of the valve prosthesis are aligned with those of the native aortic valve and the inflow ring of the prosthesis lies at the level of the insertion plane of the native leaflets[6]. The intra-annular ring of the Perceval valve prosthesis is supplied with three eyelets to pass guiding sutures which are previously made at the hinge points of the native aortic valve leaflets.

Implantation technique according to the manufacturer (Sorin group)

Now, the prepared prosthesis can be put in place. To ensure correct placement and alignment, a suture is made at hinge point of each leaflet perpendicular to the annulus, so that the three sutures are approximately 120° equidistant. The suture points should be 2-3 mm afar from each side of the insertion plane of the leaflets. After each suture is taken, the needle should be cut off and both ends of the thread secured with a clamp.

The valve is then released in two steps. First, the inflow section is released by rotating the control button on the delivery device until a click is heard and felt. At this stage, it is important to ensure that the sinusoidal struts correspond to the sinuses of Valsalva and that the stent of the prosthesis does not obstruct the coronary ostia. Second, the outflow section is released by withdrawing the sliding sheath off the holder avoiding rotational movement. It is important to keep the holder in an axial position to aorta all the time.

After visual assessment of the correct position and alignment of the prosthesis, patency of the coronary ostia and that no annulus is visible below and above the valve inflow ring, the inflow ring should be postdilated (4 atmospheric pressure for 30 s) using a dedicated catheter. While the postdilation balloon is inflated, warm sterile saline is poured within the aortic root to ensure optimal valve sealing and optimized anchoring. The guiding sutures are removed and the aortotomy is closed as usual taking care not to capture the stent of the prosthesis within the closure suture.

How we do it

Preparations of the prosthesis and the aortic root as well as the sizing procedure and prosthesis selection are similar to the method described above. The guiding sutures are also placed as described. We use 3/0 double-armed poly-propylene sutures. The suture is made with one needle from the LVOT side to the aorta side of the hinge point of each leaflet leaving 2-3 mm on each side as recommended above. The other needle is passed through the eyelet of the Perceval prosthesis before both needles are cut off.

Now, instead of directly securing the thread with a clamp, both ends are passed through an elastic tube making a snugger. While holding the prosthesis holder in place and axial to the aortic root, the snuggers are tightened. While tightening each snugger, both ends of the thread are pulled upwards. This “pull” is partially opposed by a light downward pressure on the prosthesis in the direction of the insertion of the guiding suture. The snugger is then pulled tight and secured with a Pean clamp (Figure 1). 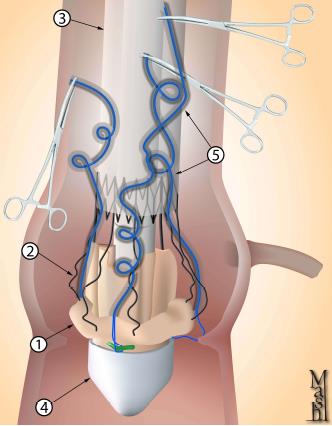 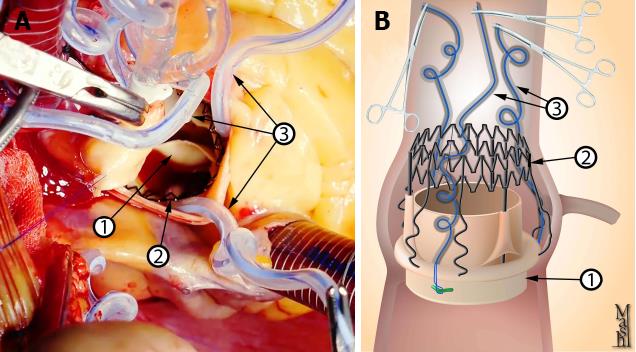 Next, the prosthesis is deployed in the same fashion described above. In this step, the assistant can help stabilize the prosthesis and hold the aorta open to aid visualization. Checking for correct positioning etc. as well as postdilation and irrigation with warm saline are also performed as described above.

Now, the snuggers a loosened and the elastic tubes are withdrawn. This should be done slowly and under direct vision taking care not to dislodge the prosthesis. The threads are then pulled out carefully. The prosthesis is checked again for proper anchoring and correct seat, and the aortotomy is closed.

As rapid-deployment prosthesis, one of the main benefits of the Perceval prosthesis is reducing operative and cross-clamp times through simplifying the surgical implantation technique. However, absolute stability is required during valve deployment to ensure proper seating of the prosthesis within the aortic root. Otherwise, valve malposition could occur[7].

On the contrary, in the technique described in this work, after tightening the snuggers, the prosthesis and the aortic annulus are fixed together eliminating the need for extra manipulations by the assistant or the nurse, so that the surgeon can self-sufficiently deploy the valve with one hand holding the delivery device and the other hand rotating the control button to release the valve.

Moreover, while tightening each snugger, the surgeon should pay attention to this one guiding suture; a step which is repeated with each suture at a time. On the contrary, the standard technique recommended by the manufacturer requires ensuring that the prosthesis is seated in the right position in respect to the three guiding sutures simultaneously.

In the manufacturer’s recommendations, in case of a hypoplastic coronary ostium, the first guiding suture should be in the corresponding sinus. We did not encounter this in our case series. We also did not find any reports on the use of Perceval prosthesis in cases with a hypoplastic coronary ostium. Indeed, this should not be problematic. Nevertheless, the modification proposed in this work would add more security to the implantation, as the snuggers push the prosthesis down as far as possible, guaranteeing freedom of the hypoplastic ostium.

The use of snuggers, was reported once to facilitate a total endoscopic AVR[8]. However, to our knowledge, the use of snuggers to fixate the Perceval prosthesis during deployment in the way described in this work has not been described before. Until now, we have used this modification in over 120 patients with 100% primary success and excellent postoperative results.