AIM: To assess the physical and mental health of fissure patients before and after topical treatment with diltiazem.

METHODS: Consecutive patients were enrolled prospectively into the study. Quality of life was measured with the short-forum 36 health survey (SF-36) before and after 6-wk treatment with diltiazem. Patients scored symptoms of pain, bleeding, and irritation using numeral rating scales at the initial and follow-up visits. Fissure healing was assessed and side effects were noted.

RESULTS: Fissures healed in 21 of 30 (70%) patients. There were significant reductions in the scores of pain, bleeding, and irritation after 1 wk of treatment, respectively. Four patients experienced perianal itching and one patient reported headache. When measured at baseline, pain and irritation showed a negative impact on two of the eight subscales on the SF-36, respectively (bodily pain and social functioning for pain; vitality and mental health for irritation). Repeating the SF-36 showed an improvement in bodily pain (P = 0.001). Patients whose fissures healed reported an improvement in bodily pain, health-perception, vitality, and mental health (P < 0.05).

Patients scored the severity of their symptoms of pain, bleeding, or perineal irritation at baseline and weeks 1, 3 and 6, on numeral rating scales (NRS) (range: 0-10); it was explained that 0 represented no symptoms and 10 the worst imaginable. Side effects such as itching, headache, and dizziness were recorded at every visit.

Data are presented median (range) unless otherwise indicated. For each of the eight dimensions on the SF-36, items scores were coded, summed and transformed on to a scale of 0 (worst) to 100 (best). A stepwise regression analysis was used to establish which variables best predicted quality of life as measured at baseline. In the regression analyses, the SF-36 subscales were selected for the dependent variables. The symptom scores of pain, bleeding or irritation at baseline were the independent variables. Age, sex, co-morbidity, employment (not in work vs employed), and duration of disease were analyzed as additional covariates. Variables were entered in the stepwise multiple regression at a P-value < 0.05, and were removed from the model at a P-value ≥ 0.05. Wilcoxon signed-rank test was used to compare baseline and follow-up paired data. Mann-Whitney U test was conducted on the cross-sectional data. SPSS 11.0 J for Windows statistical software (SPSS Japan Institute, Tokyo, Japan 2001) was used for all data analyses.

Thirty consecutive patients who fulfilled inclusion and exclusion criteria were recruited. Thirteen were male, and the median age was 54 years (18-84 years). Patients had experienced symptoms for a median of 4.5 mo (2-360 mo) at the time of inclusion in the study. There were 7 anterior fissures, 22 posterior fissures, and one patient who had both anterior and posterior fissures. Before treatment with diltiazem, no patient had received topical treatment such as glyceryl trinitrate (GTN) or isosorbite dinitrate.

The first application of diltiazem was uneventful in all patients, but 5 (17%) developed side effects subsequently. Four patients reported perianal itching; one patient discontinued diltiazem because of delayed onset of headache after 4 wk. No other side effects were reported. Overall, the median compliance rate was 100% (67%-100%). Pain, bleeding and irritaion were significantly reduced after 1 wk of treatment, respectively (Table 1).

The percentage of missing data at the item level in the SF-36 was extremely low from 0% to 2.8% (only one patient did not respond to 1 item not only at baseline, but on follow-up). The median scores of the SF-36 subscales were not significantly different regarding sex, co-morbidity, or employment. Senior patients reported significantly less physical functioning, more vitality, and more social functioning on the SF-36 scale. The patients with shorter duration of disease reported significantly bodily pain on the SF-36 scale (Table 2). The results of stepwise regression analyses, done using symptom scores and clinical variables at baseline as independent variables, are shown in Table 3. Pain at baseline showed an impact on bodily pain and social functioning, respectively. Anal irritation at baseline showed an impact on vitality and mental health, respectively. Aging was a negative predictor of physical functioning but was associated with more vitality. Duration of disease was a negative impact on role emotional. Males rather than females were correlated with better mental health.

Twenty-seven patients (90%) completed the SF-36 on week 6. Repeating the SF-36 scores showed an improvement in the pain scale (P = 0.001) (Figure 1). Comparison of responders (where fissure healed) to non responders showed that the healed group had significantly higher scores on bodily pain, health perception, vitality, and mental health subscales (P < 0.05) (Figure 2). In the group where the fissure had healed, the median pain scores on follow-up were significantly lower than for non responders (0 vs 2, P = 0.002). 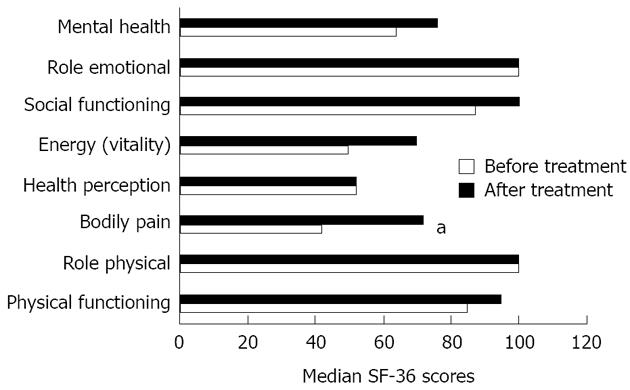 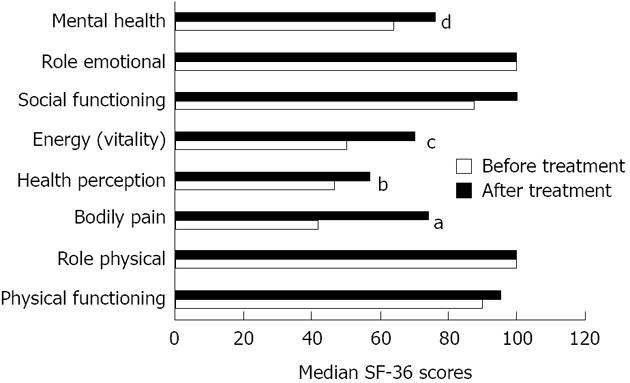 This study demonstrates that fissure symptoms such as pain or irritation show a negative impact on quality of life on the SF-36 as measured before treatment, but successful treatment of the fissures leads to pain diminution and beneficially affects health-related quality of life.

The patients with chronic anal fissures often report post-defecatory pain, bleeding and irritation, and the impact of such fissure symptoms on the quality of life needs to be evaluated. Griffin et al[16] reported that pain seemed to affect all of the SF-36 subscales. In our study, the regression analyses showed that pain scores on the NRS assessed before treatment were associated with not only bodily pain, but also social function on the SF-36 scale. Similarly, irritation scores were correlated with vitality and mental health on the SF-36 scale, respectively. These results seem to indicate that symptom evaluation of pain or irritation may help the staff to support the patients’ well-being in the outpatient clinic. Not surprisingly, senior patients reported poor scores of physical functioning on the SF-36 scale, but it should be carefully interpreted that they reported higher scores of vitality on SF-36 scale. Unlike the finding’s of the previous study[15], the duration of the fissure was negatively associated with role emotional on the SF-36 scale in our study. Caution is necessary in interpreting the results that males reported better scores of mental health on the SF-36 scale, because the data were cross-sectional.

We were also interested in determining the effect of anal fissure on the physical, mental and emotional aspects of a patient’s life before and after medical intervention. Our study showed that successful treatment can lead to improvements not only in bodily pain, but also in mental health, vitality and general health. No significant improvement in mental health found in the healed patients of the study by Griffin et al[16] may be due to the heterogeneous treatments given. Their patients were given either diltiazem or GTN, and quality of life was not assessed in each treatment group. Because diltiazem has a different side effect profile from GTN, quality of life should be measured in the patients treated with the same gel.

Fissures healed in 21 of 30 (70%) patients. There were significant reductions in the scores of pain, bleeding, and irritation after 1 wk of treatment, respectively. Four patients experienced perianal itching and one patient reported headache. When measured at baseline, pain and irritation showed a negative impact on two of the eight subscales on the short-forum 36 health survey (SF-36), respectively (bodily pain and social functioning for pain; vitality and mental health for irritation). Repeating the SF-36 showed an improvement in bodily pain. Patients whose fissures healed reported an improvement in bodily pain, health-perception, vitality, and mental health.

This paper demonstrates the physical and mental health of fissure patients before and after topical treatment with diltiazem.