The life-threatening complications following pancreatoduodenectomy (PD), intra-abdominal hemorrhage, and postoperative infection, are associated with leaks from the anastomosis of pancreaticoduodenectomy. Although several methods have attempted to reduce the postoperative pancreatic fistula (POPF) rate after PD, few have been considered effective. The safety and short-term clinical benefits of omental interposition remain controversial.

To investigate the safety and feasibility of omental interposition to reduce the POPF rate and related complications in pancreaticoduodenectomy.

In total, 196 consecutive patients underwent PD performed by the same surgical team. The patients were divided into two groups: An omental interposition group (127, 64.8%) and a non-omental interposition group (69, 35.2%). Propensity score-matched (PSM) analyses were performed to compare the severe complication rates and mortality between the two groups.

The application of omental interposition is an effective and safe approach to reduce the CR-POPF rate and related complications after PD.

Core Tip: Postoperative pancreatic fistula (POPF) is a life-threatening complication after pancreaticoduodenectomy. Multiple methods have been described in the literature to prevent POPF; however, few trials have demonstrated that a certain method can achieve good clinical outcomes. In this study, we proved that the application of omental interposition can reduce the incidence of clinically relevant POPF, which is associated with a trend towards accelerated recovery.

Pancreaticoduodenectomy is the gold standard for benign or malignant tumors in the periampullary region. Despite advances in surgical techniques and perioperative care, the postoperative morbidity rate remains high (20-50%), even in high-volume comprehensive hospitals[1-3]. Postoperative pancreatic fistula (POPF) is a life-threatening complication because of its interrelationship with delayed postpancreatectomy hemorrhage (PPH) and postoperative intraabdominal infection[4]. POPF is responsible for erosion of the gastroduodenal artery stump (GDAS), skeletonized hepatic artery (HA), or other adjacent abdominal vessels due to activated pancreatic enzymes.

During the last quarter of the 20th century, multiple methods have been described in the literature to prevent POPF and subsequent complications, including the usage of somatostatin or octreotide, introduction of pancreatic duct stenting, creation of various anastomosis techniques (e.g., duct-to-mucosa, pancreatogastrostomy, invagination), use of polyethylene glycolic acid mesh to reinforce around the pancreatojejunostomy (PJ) site, and use of fibrin glue over the PJ site[5-9]. However, few trials have demonstrated that a certain method will reinforce the PJ site in PD with favorable clinical outcomes.

Currently, the greater omentum has been widely used to reinforce anastomoses and compensate for tissue defects in the fields of thoracic, urinary, and general surgery[10-12]. Recently, some centers have shown that fixing the omental interposition behind the anastomotic site of the PJ to protect the GDAS and nearby HA from erosive pancreatic juices is the most promising approach to reduce the incidence of severe complications[13,14], but they did not have control group data.

Our study investigated whether the application of the omental interposition could effectively reduce the incidence of POPF and its related complications after pancreaticoduodenectomy.

Between January 2015 and December 2019, 196 consecutive patients underwent pancreaticoduodenectomy performed by the same surgical team at our institution. The first 69 consecutive patients did not use omental interpositions, and the remaining 127 used omental interpositions. According to whether the omental interposition was applied, the patients were divided into two groups: the omental group (79 males, 48 females; mean age: 64.8 years) and the non-omental interposition group (44 males, 25 females; mean age: 62.1 years). Propensity score matching (PSM) was used to minimize bias from the nonrandomized treatment assignments. We summarized the data on the general clinical characteristics, short-term surgical outcomes, and recovery. Moreover, the laboratory data on the drain fluid amylase obtained on the first postoperative day (DFA1) were pooled. All data were prospectively collected in our electronic media database. This study was approved by the ethics review committee of Huadong Hospital Affiliated to Fudan University (2019K087; Shanghai, China). 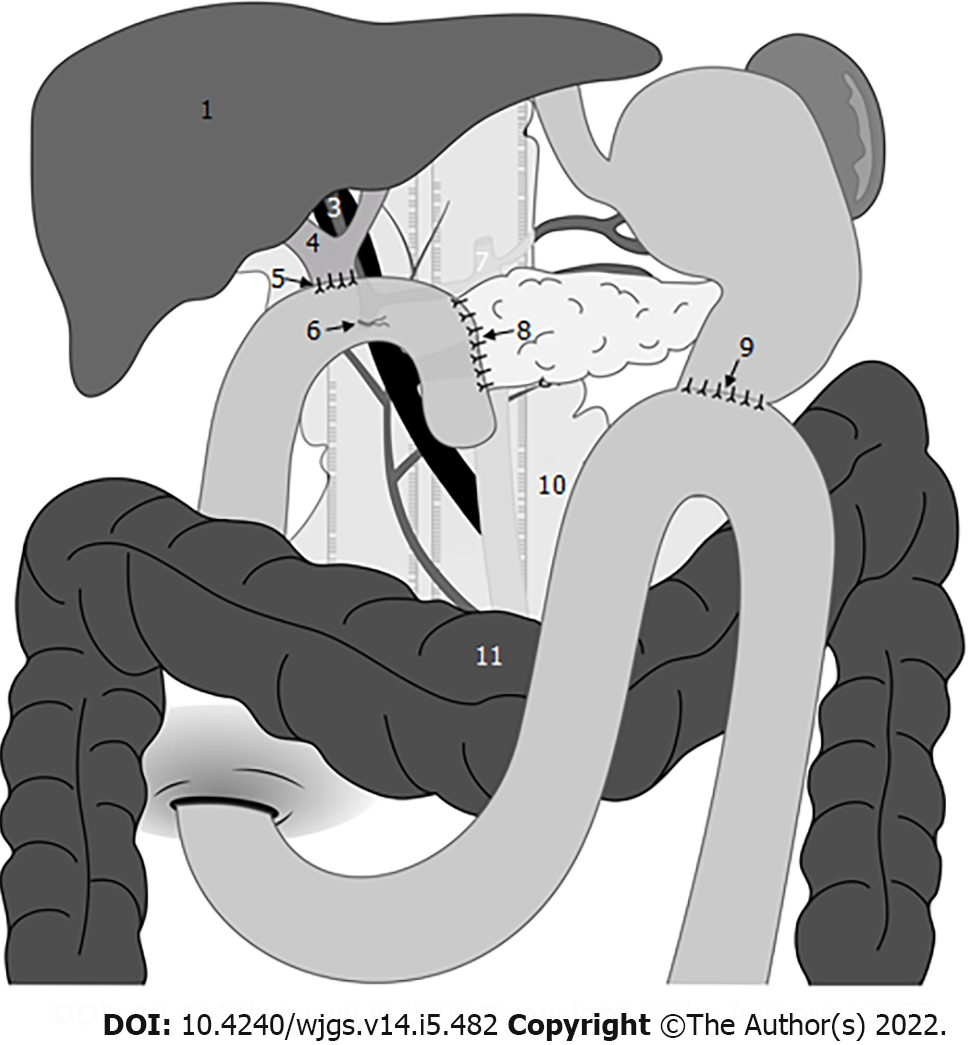 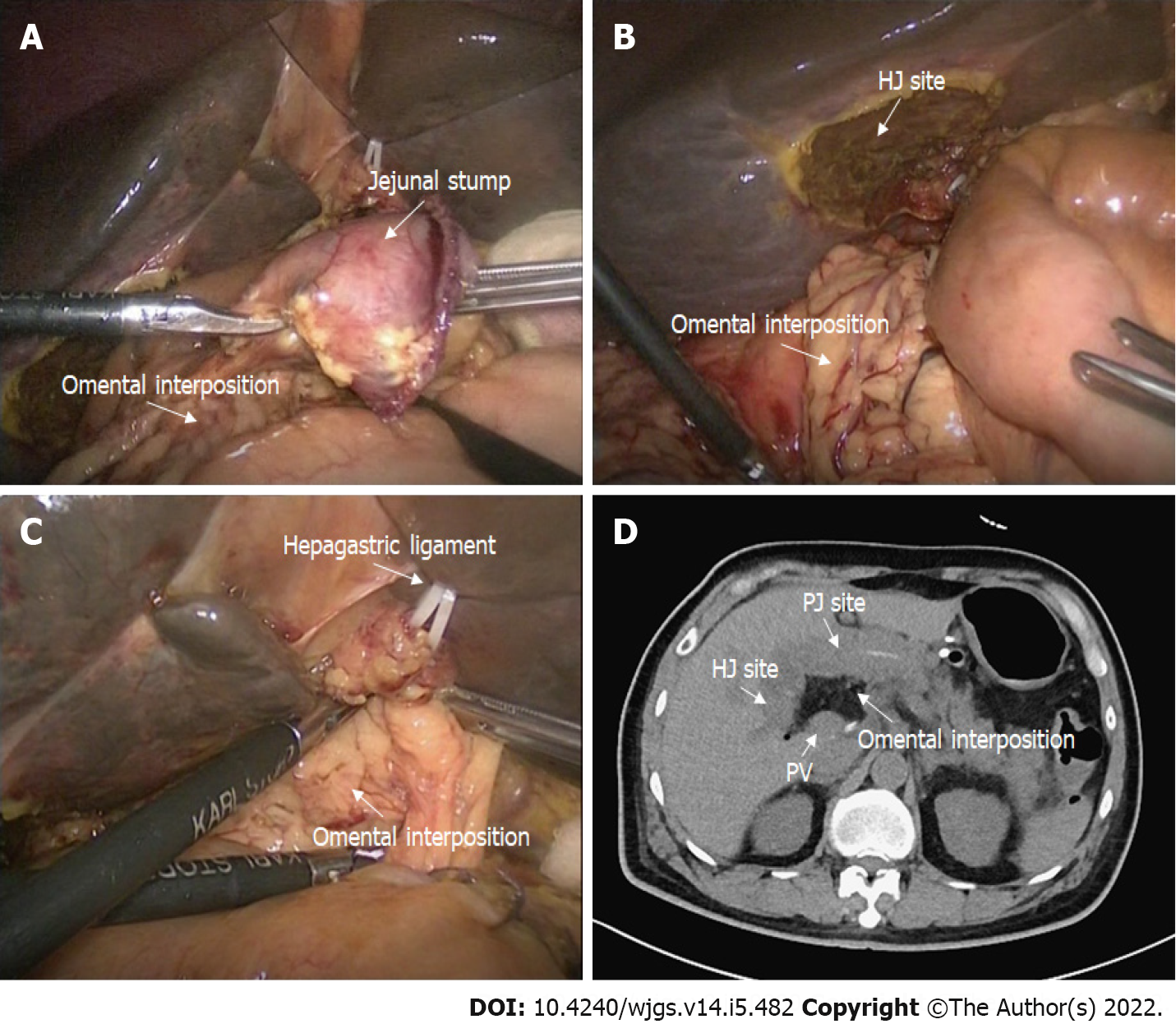 In the non-omental interposition group, we simply placed the two drainage tubes at the aforementioned positions after completing the anastomosis. After the operation, the amylase concentration from the drainage fluid was measured daily. If the drain fluid amylase obtained on DFA1 exceeded 2000 U/L, abdominal irrigation was used to dilute the concentration of pancreatic juice around the anastomosis as soon as possible. Approximately 3000 mL normal saline was irrigated every day, with a flow rate of 200 mL/h. The flow of irrigation was modulated frequently according to the character of the secretion. The suction pressure was set with low-pressure suction between 20 and 30 cm water. Once the amylase level of the dilution fluid was lower than 30 U/L, the use of abdominal irrigation was stopped. The drainage tubes were removed until the amylase concentration was less than three times the upper limit of the normal serum level. All patients underwent routine postoperative computed tomography (CT) examinations before the drain tubes were removed to assess the presence of potential complications and peritoneal effusion.

POPF was defined and graded according to the modified definition by the International Study Group of Pancreatic Fistula (ISGPF)[16]. Clinically relevant POPF (CR-POPF) was considered grades B and C. Delayed gastric emptying (DGE) and PPH were defined and classified by the International Study Group for Pancreatic Surgery[17,18]. Intra-abdominal infections were diagnosed according to the definition proposed by the Surgical Infection Society and the Infectious Diseases Society of America[19].

All statistical analyses were conducted using SPSS 23.0. The χ2 test or Fisher’s exact test was used for categorical variables, whereas the Student’s t-test or Wilcoxon rank-sum test (whether the variables were normally distributed) were used for continuous variables. P < 0.05 was considered statistically significant. After matching, each patient who received an omental interposition was matched to a patient in the non-omental interposition group by using nearest-neighbor matching in a 1:1 ratio. A PSM analysis was used to reduce the impact of the treatment selection bias when estimating the omental interposition values using original observational indicators. Multivariable logistic regression was performed with adjustments for the propensity scores using the associated covariates.

RESULTS
Analyses of all unmatched patients 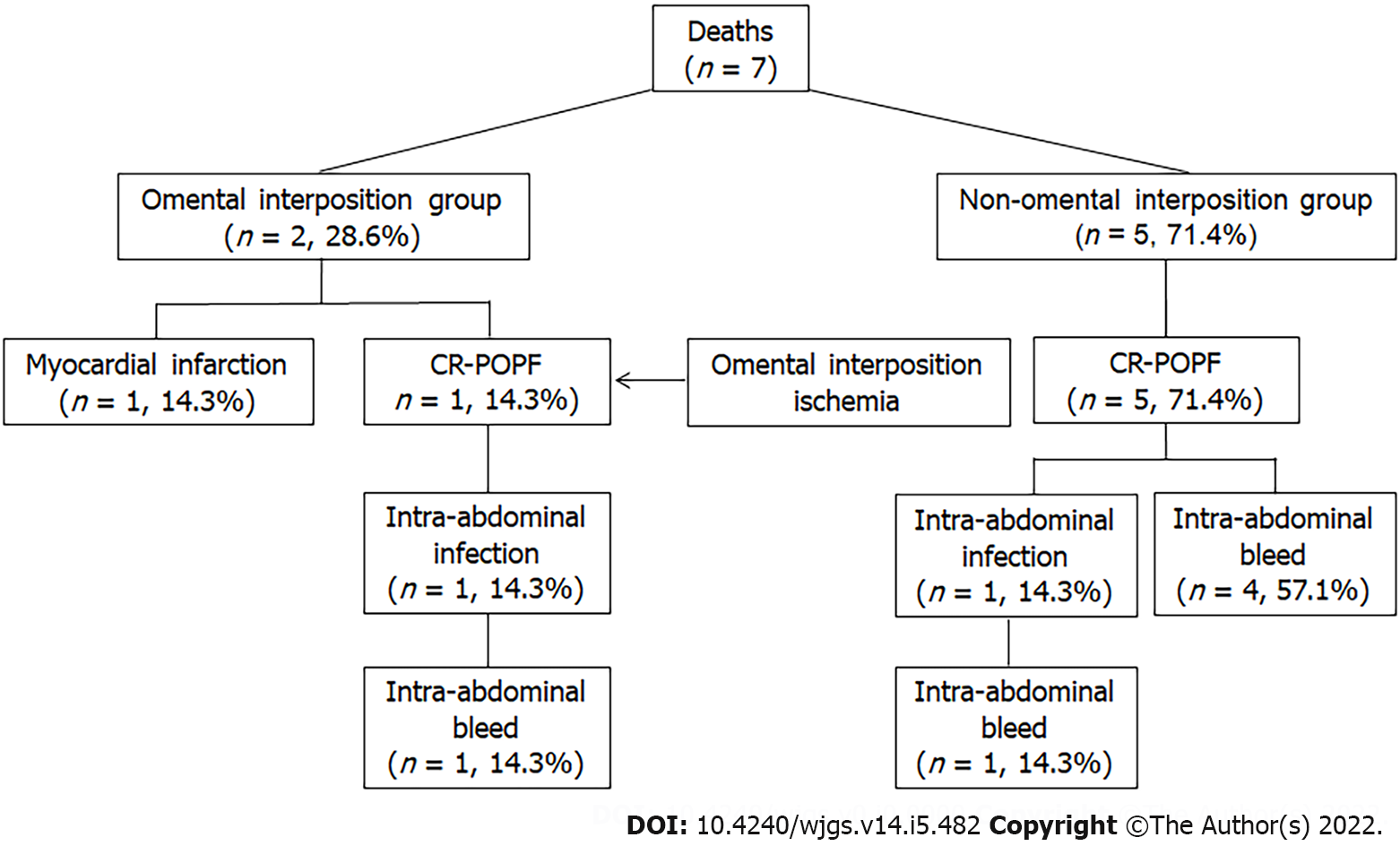 Figure 3  Causes of death in the two groups.

Figure 4 Differences between the two groups. A: Drain fluid amylase obtained on the first postoperative day (DFA1) before propensity score-matching (PSM); B: DFA1 after PSM.
Analyses of all matched patients

Factors associated with CR-POPF after PD

To date, POPF remains the most fatal complication after PD. Pancreatic fistula, especially clinically related postoperative fistula, is the most common cause of delayed PPH and intra-abdominal infections after PD[1-4]. Leaked activated pancreatic juice is highly corrosive. Once the drainage tubes fail to effectively work, pancreatic juice accumulates in the potential cavity gap around the anastomosis. This condition may erode the vulnerable anastomosis and adjacent vascular wall. Various efforts[5-8] have been tested for their ability to reduce the incidence of CR-POPF after PD, such as improved anastomosis and the use of somatostatin. However, few randomized control trials have significantly prevented CR-POPF.

Since pancreatic fistulas are almost inevitable after PD, it is necessary to improve the surgical techniques and accelerate the healing process of fistulas to strive for “harmless” pancreatic fistulas. Experimental results have shown that the greater omentum can resist corrosion, provide anti-infection properties, absorb the peritoneal effusion, regenerate blood vessels and repair tissue defects. Thus, we hypothesized that the omental interposition could seal the posterior wall of the PJ anastomosis, fill the potential cavity to avoid effusion at the surgical site, cover the skeletonized vessels to avoid erosion and accelerate the regeneration of blood vessels to improve the blood supply of the anastomosis. The study shows that the incidence of CR-POPF and delayed PPH were lower in the omental interposition group than in the non-omental interposition group. As a result of the reduced complications, the average duration to restart diet and the length of hospital stay were shorter in the omental interposition group. Previous studies on OPD have reached similar conclusions. Maeda[14] covered the major splanchnic arteries and the PV with an omental flap in 100 patients. Although the author concluded that the incidence of POPF (20%) was not significantly different from that in other articles, he did not rule out biochemical fistulas based on the modified definition by the ISGPF. Matsuda et al[20] emphasized the preventive effect of omental flaps in PD against postoperative pseudoaneurysm formation. Shah et al[21] wrapped the omental flap around the PJ site in 101 patients and showed that it could reduce the incidence of POPF (4.0% vs 17.4%), PPH (0% vs 6.5%), BF (1.0% vs 13.0%), and DGE (4.0% vs 17.4%) compared to those in the non-omental interposition group.

Previous studies[22-24] have reported that the risk factors for POPF include a high BMI, soft pancreatic texture, and small pancreatic duct size. In our study, univariate and multivariate analyses revealed that a high BMI, nonapplication of omental interposition, and main pancreatic duct diameter < 3 mm were independent factors significantly associated with the development of CR-POPF after PD. The developed statistical model had a c-index of 0.848. These findings were partially consistent with previous POPF risk scores.

This study had several limitations, including its design as a single-center, retrospective observational study. However, all clinically related data were prospectively collected, and all operations were performed by the same surgical group with the same surgical technology. Thus, the majority of the potential confounding factors were controlled.

In conclusion, we believe that the application of the omental interposition is technically simple and may help prevent CR-POPF and the associated complications following PD.

Several methods have attempted to reduce the POPF after PD, few have been considered effective. The safety and short-term clinical benefits of omental interposition remain controversial.

To investigate the safety and feasibility of omental interposition to reduce the POPF rate and related complications in PD.

In total, 196 consecutive patients underwent PD performed by the same surgical team, the patients were divided into two groups: an omental interposition group (127, 64.8%) and a non-omental interposition group (69, 35.2%). Propensity score-matched analyses were performed to compare the severe complication rates and mortality between the two groups.

The application of the omental interposition is an effective and safe approach to reduce the CR-POPF rate and related complications after PD.

Prospective studies are needed on the role of omental interposition in reducing CR-POPF.