Pancreaticoduodenectomy (PD)-induced morbidity, consisting mainly of the pancreatic fistula and its hemorrhagic and infectious consequences, is well described in the literature, in terms of its definition, risk factors, preventive measures, and standardized management of complications. However, some life-threatening complications remain atypical and undescribed.

We report here the case of a 69-year-old patient with Budd-Chiari syndrome that occurred after arterial embolization of postpancreatectomy hemorrhage. Diagnosis was established with biological findings (i.e., acute liver failure) and radiological findings (i.e., compressive hematoma of the retrohepatic vena cava). Emergency surgical revision was performed to evacuate the hematoma. The postoperative course was uneventful, with rapid recovery of liver function. To our knowledge, post-PD Budd-Chiari syndrome has never been described in the literature.

Core tip: Pancreaticoduodenectomy (PD) is responsible for significant morbidity and mortality. Pancreatic fistula (PF), the main complication of this surgery, has been the subject of many clinical practice guidelines releases to recommend its definition, prevention, and management. However, some clinical presentations of severe PF after PD remain atypical and undescribed. We report here a case of acute Budd-Chiari syndrome in relation to a compressive hematoma of the retrohepatic vena cava due to massive postpancreatectomy hemorrhage. Emergency relaparotomy to remove the compressive hematoma enabled rapid improvement. Awareness of this potential life-threatening complication may help avoid a delay in diagnosis and to propose an appropriate therapeutic strategy.

Pancreaticoduodenectomy (PD) is responsible for significant morbidity and mortality, mainly related to the occurrence of pancreatic fistula (PF)[1]. The consequent hemorrhagic and infectious complications of PF make it a life-threatening issue. While its definition, risk factors, prevention, and management are well described in the literature, some clinical presentations of severe PF after PD appear atypical and, to our knowledge, undescribed.

Acute liver failure following postpancreatectomy hemorrhage, arising from various etiologies, is widely reported in case series and reports. In the case reported herein, an acute Budd-Chari syndrome developed due to the extrinsic compression of the inferior vena cava by a hematoma, which was diagnosed by computed tomography (CT) scan and was treated surgically.

A 69-year-old man with no significant history was admitted for ampullary adenocarcinoma. A PD was performed by laparotomy using the Whipple procedure, followed by a Child reconstruction. The patient was considered high-risk for PF, according to the Wirsung duct size of ≤ 3 mm and presence of soft pancreatic parenchyma; thus, a preventive treatment (octreotide) was given. The postoperative course was marked by PF development on the 3rd postoperative day, which was treated with somatostatin and conservation of the nonaspirating drain placed intraoperatively. A control CT scan was performed on the 7th postoperative day and showed absence of active bleeding or pseudoaneurysm, absence of hematoma, and good placement of the drain (with contact with the pancreaticojejunal anastomosis). On the 12th postoperative day, the patient presented hemorrhagic shock with hemodynamic instability. The CT scan revealed an active bleeding arising from the stump of the gastroduodenal artery, with formation of a noncompressive hematoma. The drain had migrated and was no longer in the area of the pancreatic anastomosis. The PF was scored as grade C, according to International Study Group of Pancreatic Fistula classification. Endovascular exclusion of the gastroduodenal artery was performed by interventional radiology, along with placement of a covered stent in the hepatic artery.

Severe acute liver failure and acute renal failure developed immediately. Blood test showed cytolysis above 10 N (aspartate aminotransferase at 2000 UI/L, alanine aminotransferase at 1738 UI/L), cholestasis (alkaline phosphatase at 336 UI/L, gamma-glutamyltransferase at 388 UI/L), total hyperbilirubinemia (at 43.8 μmol/L), decreased prothrombin rate (by 36%), decreased factor V (by 32%), and a creatinine rate of 152 μmol/L. On the repeat CT (abdominal injection of iodinated contrast), the liver presented a heterogeneous enhancement, with a defect of enhancement in the left liver on portal time. Concerning liver vascularization, the portal trunk, the hepatic veins and the hepatic artery were permeable, with absence of intrastent thrombosis and of active bleeding. However, the inferior vena cava was compressed in its retrohepatic and suprahepatic segments by a hematoma located in the lesser omental sac (Figures 1 and 2). 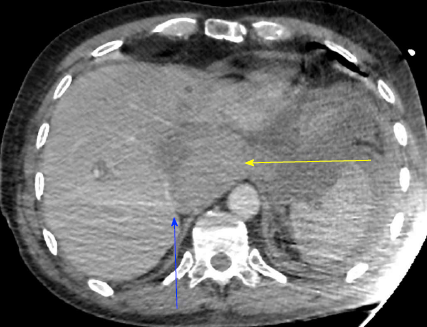 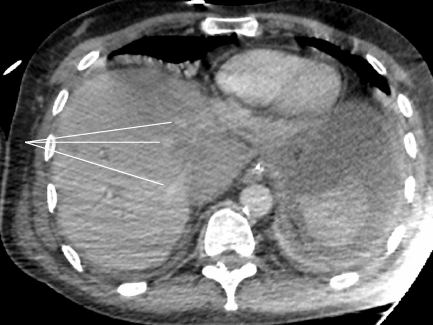 This presentation was consistent with a secondary acute Budd-Chiari syndrome, due to the extrinsic compression of the inferior vena cava by a compartmentalized hematoma in the lesser omental sac. This hematoma was linked to the abundant bleeding of the stump of the gastroduodenal artery.

A emergent relaparotomy was performed and confirmed the diagnosis, showing a congestive hepatomegaly and a compression on the inferior vena cava by the hematoma.

Hemodynamic status and liver function improved rapidly after evacuation of this hematoma. Fifteen days later, CT showed hepatic segment I necrosis, with no clinical and biological consequences. Postoperative follow-up was progressively favorable, with the recovery of a correct general status and a normal liver function.

We report here a very atypical complication of a severe PF after PD: An acute Budd-Chiari syndrome secondary to a compressive hematoma of the retrohepatic vena cava.

The reported morbidity rates after PD range from 30% to 50%, and are mainly related to the occurrence of PF. PF can be life-threatening because of the hemorrhagic and infectious complications it induces[1]. Delayed postoperative hemorrhage is one of the most severe issue in pancreatic surgery. This dreaded complication is usually secondary to erosion of the visceral arteries, most often the gastroduodenal artery stump, following a PF[2]. In salvage hemorrhage treatment, transcatheter arterial embolization or stenting of the hepatic artery is an effective and safe treatment; whereas, open surgical hemostasis may cause remarkable decaying, be noneffective, and lead to ligation of the hepatic artery[2].

The complication of liver failure in the postoperative period after PD occurs only seldomly, and is reported in the literature to the same low extent. Most of the reported cases are only described in cases reports; these include an underestimated or undiagnosed liver disease before surgery[3,4], a nutritional origin related to exocrine pancreatic insufficiency[5,6], an asymptomatic median arcuate ligament not detected before and during surgery, or inefficiently treated[7,8], a hepatic artery injury during the PD[9,10], as secondary to adjuvant chemotherapy (mainly with gemcitabine)[11], a proximal or selective hepatic arterial embolization or intrastent thrombosis[12-17], and a portal vein occlusion[18,19].

In the case presented herein, liver failure was probably multifactorial, but dominated by the inferior vena cava compression interfering with hepatic venous drainage. The migration of the drain may have favored misdrainage and the formation of consequently compressive hematoma. The delay between CT scan and endovascular exclusion was approximately 3 h, which may explain the increase in hematoma, becoming compressive on the inferior vena cava. This delay was due to the difficulty of the endovascular treatment. Surgical revision was preferred to radiological drainage, because of the severity and high-speed development of liver failure.

Budd-Chiari syndrome results from obstruction of hepatic venous drainage, regardless of the obstruction site (from hepatic venules to the inferior vena cava) and cause. It is classified into primary or secondary cases. Secondary Budd-Chiari syndrome is defined as endoluminal obstruction by extravascular lesion (i.e., tumor, infection, or parasite) or by extrinsic compression (i.e., tumor or hematoma). Clinically, Budd-Chiari syndrome is characterized by liver failure in a few days, sometimes severe or even fulminant. Hepatomegaly and elevated transaminases (greater than 5 N) are associated. Ascites and renal insufficiency are very common. In our case, the absence of ascites, which can be explained by the persistence of permeability of the hepatic veins, led to a delay in the diagnosis.

The treatment of Budd-Chiari syndrome consists of treating the cause (here, evacuation of compressive hematoma and control of hemostasis) and reestablishing hepatic venous drainage. The overall prognosis has improved significantly in recent years. Reportedly, when the entire therapeutic strategy is implemented, the 5-year overall survival rate is 89%[20].

In our case, the patient presented a series of complications during the postoperative period. The main issue was grade C PF responsible for hemorrhage due to rupture of a pseudoaneurysm of the gastroduodenal artery stump, requiring emergent endovascular treatment. This sequence of complications, as well as its management, risk factors and prevention, have been well described in the literature. To our knowledge, extrinsic compression of the inferior vena cava by a compartmentalized hematoma in the lesser omental sac responsible for an acute Budd-Chiari syndrome with severe liver failure remains undescribed.

Conventionally, Budd-Chiari syndrome is associated with a compensatory hypertrophy of properly drained areas (most often segment I because of anatomy of venous drainage pathways) and ischemia that can progress to necrosis of obstructed venous drainage areas[20]. In our case, asynchronous venous obstruction by initial compression of the retrohepatic vena cava, and therefore Spigelian veins, followed by compression of the cavohepatic return pathways explains the predominant segment I ischemia, causing its necrosis.

More generally, it may be necessary to discuss the interest of a systematic surgery after endovascular treatment of hemorrhage for evacuation and drainage of ongoing or residual hematoma that could be a source of infectious or mechanical complications, such as gastroparesis, increasing morbidity, lengthening of hospital stay, and mortality.

An acute liver failure following endovascular treatment of postpancreatectomy hemorrhage should lead to the ruling out of Budd-Chiari syndrome, justifying emergent diagnosis imaging, and addressed by surgical revision.