Citation of this article
Annamalai A, Kosir U, Tek C. Prevalence of obesity and diabetes in patients with schizophrenia. World J Diabetes 2017; 8(8): 390-396

To compare the prevalence of diabetes in patients with schizophrenia treated at a community mental health center with controls in the same metropolitan area and to examine the effect of antipsychotic exposure on diabetes prevalence in schizophrenia patients.

This study demonstrates the high prevalence of obesity and diabetes in schizophrenia patients and indicates that antipsychotics may not be the only contributor to this risk.

It is now well established that people with serious mental illness (SMI), including schizophrenia, have excess morbidity and mortality leading to a reduced lifespan of 20-25 years compared with the rest of the population[1,2]. The increased mortality is largely attributable to physical illness, including metabolic abnormalities and cardiovascular disease, rather than factors that are directly associated with psychiatric illness such as suicide or homicide.

Schizophrenia is seen in approximately 1% of the population. The rates of obesity and diabetes in patients with schizophrenia are higher than the general population[3]. Obesity is reported in approximately 50% patients, metabolic syndrome is reported in up to 40%, glucose intolerance in up to 25% and diabetes in up to 15% patients with schizophrenia[4]. The cause for the increased prevalence of these conditions is multifactorial. Antipsychotics, a cornerstone of treatment in people with schizophrenia, cause weight gain, glucose intolerance and other metabolic complications. Second generation antipsychotics, notably clozapine and olanzapine, are associated with a 5-fold increase in metabolic syndrome after three years of treatment[5]. Patients with schizophrenia are known to have unhealthy diets and inadequate physical activity[6] due to lower socioeconomic status, lower educational level, and sub-optimal living situations. Symptoms of schizophrenia such as low motivation, apathy and cognitive deficits also could play a role in preventing access to high quality health care.

A recent meta-analysis of metabolic parameters in first episode psychosis patients demonstrated increased insulin resistance and impaired glucose tolerance when compared to controls[10]. However, an earlier review of diabetes in first episode patients showed that established diabetes was much less common in first-episode psychosis patients compared to those already on antipsychotics[11]. People with schizophrenia may have increased vulnerability manifesting as pre-diabetes that is compounded by cumulative exposure to antipsychotic medications.

Comprehensive psychiatric review notes of consecutive patients followed at Connecticut Mental Health Center (CMHC) Psychosis Program within a one-year period were audited. The study was approved by the Yale Human Investigations Committee. Inclusion criterion was a chart diagnosis of schizophrenia or schizoaffective disorder verified by the Structured Clinical Interview for Diagnostic and Statistical Manual-IV (SCID for DSM-IV). CMHC Psychosis Program is a diagnosis specific, multidisciplinary outpatient clinic and research program, which serves community dwelling, low-income adult patients diagnosed with a non-affective psychosis. The program is the major point of care for psychotic patients who dwell in the Greater New Haven area, an urban catchment area with an estimated census of 200000 people. The program itself has a census ranging 450 to 500 patients, with about 5% annual turnover rate.

Comprehensive psychiatric review is a 30-50 min full psychiatric examination of established patients by one of four physicians and one advanced practice nurse. Notes are recorded in an institution specific standard form, and requires recording of all diagnoses, all medications, allergies, primary care and physical/gynecological exam status, review of systems, height, weight, body mass index (BMI), substance use, and mental status information. Per Psychosis Program policies, every patient is weighed before the exam with the same scale calibrated regularly and height is measured at least once with the same scale during patients’ tenure in the clinic. While waist circumference is a better indicator of abdominal obesity and subsequent cardiovascular risk, it is not clear that it offers additional information for clinical management. Also it is not part of usual clinical care due to provider discomfort[12]. Hence, BMI was used as an index for obesity in this study. Diabetes mellitus (DM) type 2 diagnosis was extracted from the chart by self-report and verified by obtaining primary care records. In addition, patients were screened at least yearly for diabetes by glycosylated hemoglobin (Hba1c) and referred for treatment if they tested positive. 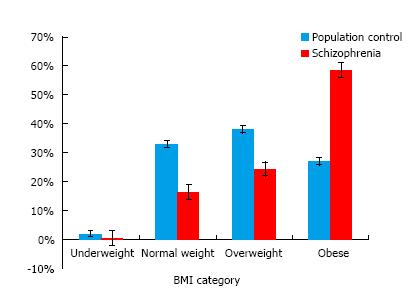 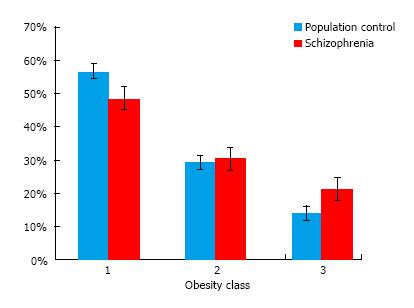 Given the differences between two groups in demographics, a univariate analysis was conducted and GLM procedure used to control for age, sex, and race. After controlling for these demographic variables, schizophrenia group still had a highly significant association with higher BMI (F = 26.78, df = 1, P = 0.003). None of the other variables, or interactions with demographic variables, were significant. Following this, a binary logistic regression analysis was conducted to calculate predictive value of schizophrenia status for obesity after age, sex and race controlled, and schizophrenia status remained significant with an odds ratio of 3.25 (95%CI: 2.47, 4.29, P = 0.000).

Next, diabetes mellitus status was examined in the sample. Schizophrenia group had a much higher rate of diabetes compared to control group (Figure 3, 23.9% vs 12.2%, χ2 = 31.81, P = 0.000). Within the schizophrenia group, there were no statistically significant differences between diabetics and non-diabetics in rates of second generation antipsychotic use, multiple antipsychotic medication use or chlorpromazine equivalent daily antipsychotic dosage. Based on these findings, medication terms were dropped from multivariable analyses. Following this, a binary logistic regression procedure was conducted to control for demographic variables of age, sex and race to examine the relationship between schizophrenia and diabetes. Higher age (P = 0.000) and non-Caucasian race (P = 0.000) was significantly predictive of diabetes status and male sex approached significance (P = 0.07). After controlling for these demographic factors, schizophrenia remained highly associated with diabetes with an odds ratio of 2.42 (95%CI: 1.75, 3.36, P = 0.000). Since obesity is closely associated with diabetes, one more regression analysis was performed including first BMI, and then obesity status (Table 2) and schizophrenia still remained highly significantly associated with diabetes. 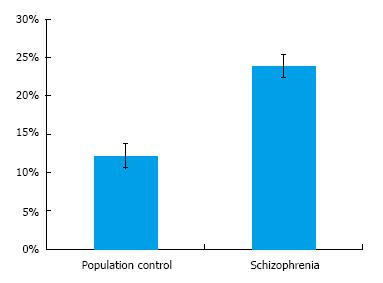 In this study, patients with schizophrenia had a significantly higher average BMI, higher percentage of people with class 2 and class 3 obesity and higher percentage of people with diabetes, compared to the general population. The association for both obesity and diabetes remained after controlling for differences in demographic variables between the two groups. Having schizophrenia was associated with more than a 3-fold risk of obesity and more than a 2-fold risk of diabetes.

These results are consistent with what is known about the increased risk for metabolic syndrome in patients with schizophrenia. But a notable finding is that after controlling for BMI and obesity status, the risk of diabetes remained significant, though lower. Though pathways of diabetes development are thought to be the largely the same as those causing obesity, diabetes can occur without weight gain in patients on antipsychotic medications[14]. It is postulated that antipsychotics may to some extent affect glucose regulation independent of their effect on weight.

Other factors may affect these results. The survey data from BRFSS is based on self-report by metropolitan area residents. People may have undiagnosed diabetes and tend to underestimate and underreport obesity. Patients with schizophrenia have increased contact with health care leading to higher likelihood of diabetes screening during mental health treatment. However, the increased prevalence of diabetes seen in this study is consistent with earlier reports and is unlikely to result from a screening bias given that historically people with SMI have low rates of screening and treatment for metabolic conditions[15].

An innate predisposition to diabetes, seen in first episode psychosis patients, may be compounded by antipsychotic medications, lower socioeconomic status and decreased access to quality health care. Patients with schizophrenia also are less physically active contributing further to insulin resistance. Antipsychotics alone may not account for the high metabolic burden seen in chronic schizophrenia patients and high mortality rates. In fact, antipsychotic use is associated with overall lower mortality, especially when highly effective medications like clozapine are used for treating schizophrenia[17].

Strengths of this study include the large naturalistic sampling of community dwelling schizophrenia patients as well as a local population control sample in the same geographic area. Patients were not recruited for the study, instead all patients in the Psychosis Program with diagnosis of schizophrenia were included. This study design allows for applicability of results to real world settings. In the community mental health center sample, schizophrenia diagnosis was based on a structured interview and diabetes diagnosis was established based on previous lab diagnosis. A limitation is that the BRFSS survey data was based on self-report. Also the antipsychotic use is cross sectional and results may be confounded by changes in the type of antipsychotic used throughout patients’ disease history. Since this was not a controlled study, demographic variables were different between the disease and control groups. While these may confound results, in our study, higher prevalence of obesity and diabetes in schizophrenia persisted after controlling for these variables.

In conclusion, this study is consistent with previous research showing significantly increased prevalence of obesity and diabetes in people with schizophrenia. The risk for diabetes is present even when weight is controlled for as a causative factor. Antipsychotics contribute to the burden of diabetes but may not be the primary cause. Since schizophrenia patients are associated with a very high risk of diabetes, clinicians should be vigilant about screening and monitoring patients for diabetes from the beginning of treatment.

The Connecticut Department of Mental Health and Addiction Services supports all research activities at Connecticut Mental Health Center. The authors would also like to acknowledge their patients who are the source for the data and colleagues and resident psychiatrists who provide care and contribute clinical data.

Many studies show there may be an inherent risk for diabetes in schizophrenia patients as evidenced by increased insulin resistance in patients with new onset of psychosis. Inflammatory pathways seen in both schizophrenia and people with obesity and diabetes may mediate some of this risk. The pathways leading to obesity and those leading to diabetes are not well differentiated. All these are important areas for further research. The detrimental effect of antipsychotics on weight and insulin resistance is well known. However, the extent of this risk compared to other factors is not clear. The contribution of various known risk factors on development of metabolic syndrome in people with schizophrenia is an area for further study.

More and more studies are establishing that there is a high prevalence of obesity and diabetes in schizophrenia. There is emerging evidence that some risk of diabetes may be present independent of weight. The present study adds to existing evidence that antipsychotics, while contributing to burden of diabetes, are not the only cause.

This naturalistic study is consistent with existing research that shows high prevalence of obesity and diabetes in schizophrenia patients. The risk of diabetes appears to be mediated not only by weight gain but other factors. Hence, not only weight but also diabetes screening should be prioritized in schizophrenia populations. Also this should be done regardless of whether they are on antipsychotic medications or not. Clinicians should be vigilant about early detection and treatment. Many studies in people after the first episode of psychosis demonstrate that early detection and treatment of obesity and diabetes may improve morbidity and mortality.

The manuscript is well written and concise.