Maf is a family of oncogenes that were first discovered in the genome of the avian transforming retrovirus, AS42[1,2]. Maf-related proteins have been identified in many species and exhibit a universally recognized DNA binding site, enabling the proteins to act as transcription factors. These Maf transcription factors are well known to play active roles in many organs, tissues, and cells for the development, differentiation and establishment of specific functions, including effects in the pancreas[3], lens[4], myeloma cells[5], and cartilage[6,7].

Previously, Maf transcriptional factors could be shown to stained in premature and mature pancreas tissue in our report[28]. Cells that stained positive for Maf transcription factors were diffusely localized in premature pancreas tissue, with some cells exhibiting double staining. The staining pattern for each Maf protein was different: unlike, MAFA-positive cells, which exhibited a diffuse staining pattern, MAFB and c-MAF were stained prominently in the branching ducts and acinar buds. Subsequently, MAFA and MAFB were stained more intensely in the islet areas of adult pancreas tissue, suggesting that Maf transcription factors are involved in the differentiation and acquisition of pancreatic endocrine cells, coordinating with each other in some situations (Figure 1). In contrast, non-endocrine composite cells of the pancreas, such as acinar cells and ductal cells, may also be affected by several Maf transcriptional factors during their maturation and differentiation process. More interesting observation is that cells positive stained for Maf transcription factor continued to be detected not only in the islets but around the ductal and interstitial area after maturation. 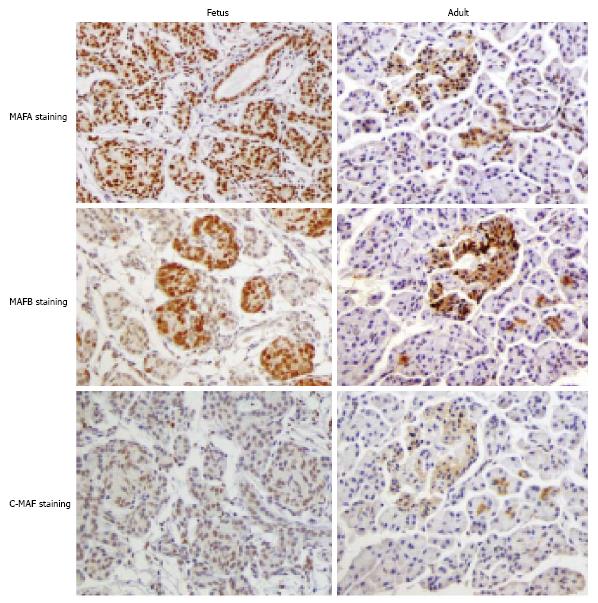 Figure 1 Immunostaining for MAFA, MAFB, and c-MAF in fetal and adult human pancreas tissues. An immunohistochemical analysis was performed using primary antibodies against MAFA (BL1069; Bethyl Laboratories, Inc.), MAFB (P20; Santa Cruz Biotechnology, Inc.), and c-MAF (M153; Santa Cruz Biotechnology, Inc.). The details are described in reference[28]. Samples of human normal fetal tissue (female, 20 wk, catalog No. T2244188, Lot No. A607380) and adult pancreas tissue (male, 23 years, catalog No. T2234188, Lot No. A604382) were purchased from BioChain. The fetal pancreas tissues were diffusely stained for the Maf transcription factors, and characteristic histological differences were observed between the fetal and adult tissues, with a more intense staining pattern observed in the islet areas of the adult pancreas tissue.
ACTIVITIES OF MAF TRANSCRIPTION FACTORS BEYOND β CELLS

MAF TRANSCRIPTION FACTORS AND THE KIDNEY

In the kidney, large Maf transcription factors may be implicated in both normal development and pathophy-siological processes responsible for kidney disease. We previously reported the expression profiles of large Maf transcription factors in the kidney. We have reported the expression of c-Maf mRNA levels in mouse kidney tissue from embryonic day 12 (E12) until 1 or 4 wk after birth. c-Maf mRNA was firstly expressed at E16 in the proximal tubules and continued to be expressed until 4 wk after birth. Meanwhile, MAFB expression has been identified in the glomeruli (Figure 2)[39,40]. 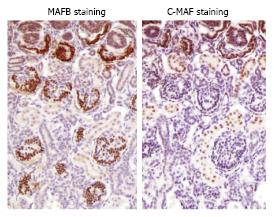 The Mafb mouse gene (also known as Kreisler and Krml) is known for its role in hindbrain patterning. Sadl et al[41] showed that mice homozygous for the kr (enu) mutation develop renal disease, in which the glomerular podocytes are affected, resulting in nephrotic syndrome. The fusion and effacement of the podocyte foot processes were observed histologically, and MAFB was shown to be essential for the cellular differentiation of the podocytes. Since the podocytes of the kr (enu) homozygotes differentiated abnormally, the homozygotes exhibited proteinuria, as is observed in nephrotic syndrome. The authors speculated that MAFB acted during the final stages of glomerular development, i.e., the transition between the capillary loop and the mature stages, and downstream of the Pod1 basic domain helix-loop-helix transcription factor[41]. In Mafb-knockout mice, renal dysgenesis with abnormal podocyte differentiation and tubular apoptosis were prominent, accompanied by the suppression of F4/80 expression in mature macrophages[42].

A prominent phenotypic feature of c-Maf - knockout mice is a small cell volume of the kidney proximal tubules and hepatocytes[40]. The precise mechanism underlying this dysregulation of cell structure formation has not been clarified, but the c-Maf transcriptional factor has been suggested to contribute to the embryonic cell development and differentiation of at least the proximal tubules and hepatocytes. The mRNA expression profile in kidney tissue from Maf-knockout mice, as evaluated using a DNA microarray, showed that the plasma level of glutathione peroxidase 3 (GPx-3) was predominantly downregulated. Since GPx-3 is an antioxidant enzyme, C-MAF may be related to the antioxidant system mediating the modulation of GPx-3 in the kidney[14]. Recently, c-Maf-inducing protein (also known as c-Mip; protein designation, CMIP), a pleckstrin homology (PH) and leucine-rich repeat (LRR)-domain-containing protein, has been identified; CMIP inactivates GSKbeta and interacts with RelA, a key member of the NF-kappaB family. Interestingly, the expression of CMIP (c-Maf-inducing protein) was increased in the podocytes of patients with idiopathic nephrotic syndromes[43]. Membrane nephropathy is characterized by nephrotic-range proteinuria in clinical and subepithelial deposits of immune complex in the basement membrane of the glomerulus. The primary cause of the disease has not been clarified, but antibodies against podocytes located on the outer layer of the basement membrane of the glomeruli form complexes that lead to deposits. A recent report has shown that CMIP was overexpressed in podocytes in an experimental glomerulonephritis rat model exhibiting heavy proteinuria and membranous nephropathy in human. This overexpression was suppressed by im-munological treatment resulting in a reduction of proteinuria; thus, while the role and significance of CMIP in podocytes and how it induces massive proteinuria have not yet been elucidated, CMIP or c-MAF-related transcriptional activities may deregulate podocyte function and cause proteinuria[44].

The expression of MAFA in the kidney is uncertain; however, based on the UniGene databank, human MAFA is also expressed in the kidney, lung, and blood. One interesting report described transgenic mice with a disease in which the hybridized gene complex resulted in MAFA deficiency and MAFK overproduction in pancreatic β cells. The phenotype of these transgenic mice was severe diabetes with large amount of proteinuria. A histological examination showed a reduction in β cells in the pancreas and typical histological diabetic nephropathy accompanied by a characteristic nodular lesion in the glomeruli.

Energy balance in humans is well regulated by multiple organized systems, and the central nervous system (CNS) is likely to be involved and to play important roles in these systems[46]. The CNS contributes to the maintenance of energy balance in part by controlling feeding behavior and also by changing biological conditions and the homeostasis of intra-body conditions. Systemic adjustments of the metabolic state are achieved by the coordination of the CNS and peripheral effector organs. In the CNS, transcription factors are involved in the regulation of behavior and intra-body biological conditions[47]. Calorie intake is sensed in the CNS, altering the expression of signal transduction-mediating transcription factors. These responses are then translated into intra-CNS hormones (resulting in changes in eating behavior) and peripheral hormones take out including insulin and leptin, which function to regulate energy balance by direct effects on peripheral organs in coordination with calorie intake and consumption balance.

In our previous mouse study, the Mafa mRNA level was significantly downregulated in brain tissue in vivo, as observed using a siRNA technique, and changes in the gene profile in the CNS were screened[48] (Figure 3). The results showed distinct effects on gene expressions in brain tissue, and some of the affected genes were related to eating behavior and energy consumption, such as growth hormone and arginine vasopressin. In addition, several interesting genes and related gene products were identified in this profiling. Pro-melanin-concentrating hormone (Pro-MCH) regulates body weight[49], and changes in its expression can alter the susceptibility to fat metabolism[50,51]. Orexin is a topical neuronal peptide that regulates arousal and sleep[52], and defective orexin producing neuronal cells cause narcolepsy. Orexin may work in the brain-gut network, which regulates appetite during wakefulness[53]. In addition, pro-opiomelanocortin-alpha (an alpha-melanocyte stimulating hormone) and gastrin-releasing peptide, which are important neuropeptides regulating eating behavior and modifying the excretion of several hormones required for food digestion, have also been implicated in the above-mentioned network. 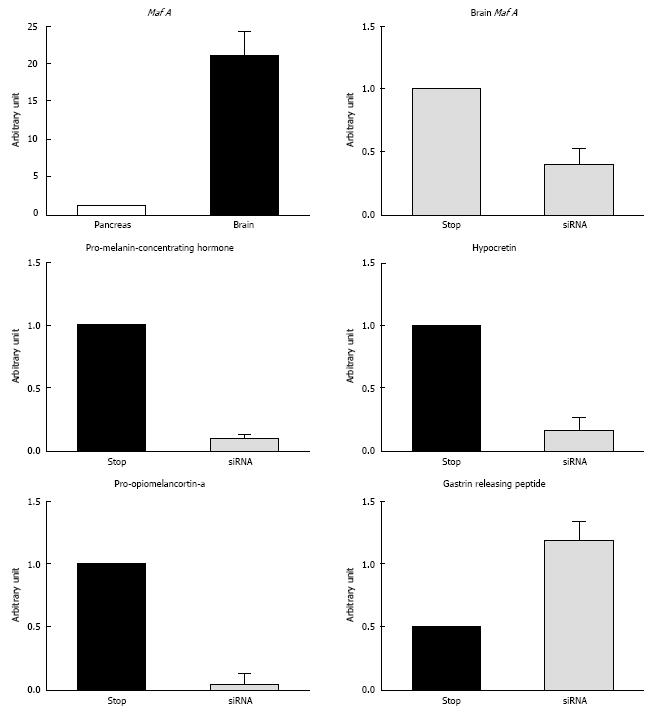 Thus, MAFA is a strong transactivator of insulin in peripheral organs and pancreas, while the modulation of MAFA mRNA expression in the CNS induces change in related genes resulting in upregulation and downregulation of neuropeptides that influence appetite, behavior, arousal, and sleep.

Adipocytes develop from mesenchymal stem cells in adipose tissue and various other tissues. Mesenchymal stem cells destined to become adipocytes develop and differentiate into mature adipocytes as a result of transcriptional regulation. PPARγ is known to coordinate with members of the C/EBP family to exert well-documented and important functions at different time points during adipocyte differentiation[54]. Siersbæk et al[55] also reported transcriptional networks for adipogenesis take out in which two waves of transcriptional cascades composed the adipogenetic pathway. Maf transcription factors are likely to be involved in this process, and Serria et al[33] reported that the expression of c-MAF is downregulated during 3T3-L1 cell differentiation and proliferation. Furthermore, an age-related decrease in the expression of c-MAF in mesenchymal cells has been reported, and present evidence indicates that c-MAF regulates mesenchymal cell bifurcation into osteoblasts and adipocytes. A role of c-MAF in osteogenesis and adipogenesis was also observed in c-Maf-knockout mice[56].

As discussed previously, MAFA may be involved in the differentiation of both adipocytes and pancreatic β cells. To explore the role of MAFA in adipose tissue, alterations in the expressions of MAFA-related genes in a cultured adipocyte cell line, 3T3-L1, were observed after Mafa mRNA interference had been induced[57]. Mafa mRNA suppression induced morphological changes in 3T3-L1 cells during differentiation. As shown in Figure 4, the cytoplasm of spindle-shape cells expanded after differentiation and lipid droplets formed in mature adipocytes, as revealed by the presence of red droplets of Oil Red O stain in the cytoplasm. This morphological change was not observed during Mafa siRNA suppression, and no expansion of the cytoplasm was observed. Since lipid droplet formation is essential for adipocyte differentiation, MAFA may play a critical role in the process of adipocyte differentiation. The expression levels of peroxisome proliferator-activated receptor (PPARγ2) and CCAAT/enhancer-binding protein (C/EBPα) were recognized as being essential for the differentiation and function of 3T3-L1 cells. PPARγ 2 plays a leading role in the synthesis and accumulation of lipid droplets in adipocytes, and C/EBPα is critical for the establishment of insulin sensitivity[54]. At the molecular level, the mRNA expression levels of the PPARγ gene or the C/EBP gene, which encode master adipogenic transcription factors, were markedly suppressed by Mafa-siRNA treatment, i.e., by the suppression of MAFA expression. In conclusion, adiopocyte differentiation and formation is regulated by a network of multiple transcription factors, and Maf transcription factors are likely to be involved, in coordination with other transcription factors.

Figure 4 Comparison between histological changes and the Oil-Red-O staining of stop-mafA-siRNA- and mafA-siRNA-treated cells. Mouse 3T3-L1 pre-adipocytes were induced to differentiate, and Mafa SiRNA was transfected using a transfection reagent. The morphological appearances of the pre-adipocyte culture before induction and 7 d after induction were then compared. The morphology of the 3T3-L1 cells was directly observed, and lipid droplets were stained using Oil Red O. Oil Red O staining was compared between untreated and Mafa-siRNA-treated cells. Intracellular lipid staining was not observed in the Mafa-siRNA-treated cells.
ACKNOWLEDGMENTS

The authors are grateful to Atsuko Teraoka, Mayuko Tsuboi and Ai Munekawa for their technical assistance.