Oral hypoglycemic agents include insulin secreta-gogues [sulfonylureas, meglitinides, and dipeptidyl peptidase-4 (DPP-4) inhibitors] and insulin sensitizers [metformin and thiazolidinediones (TZDs)][3]. α-gluco-sidase inhibitors decrease glucose absorption. The American Diabetes Association (ADA) and the European Association for the Study of Diabetes recom-mend metformin as the first-line oral therapy[2,3]. If the glycated hemoglobin (HbA1c) target is not achieved by 3 mo, either sulfonylurea, TZD, DPP-4 inhibitor, GLP-1 receptor agonist, or basal insulin should be combined with metformin[2].

The ADA recommends lowering HbA1c to < 7.0% to reduce microvascular disease incidence[4]. However, only approximately half of T2DM patients achieve this[3,5]. Oral hypoglycemic agents have side effects: hypoglycemia and weight gain (sulphonylureas)[6]; peripheral edema, weight gain, and fractures (TZDs)[7]; a possible increased risk of bladder cancer (pioglitazone)[8]; and abdominal symptoms (metformin and α-glucosidase inhibitors). Metformin can also cause lactate acidosis.

Few insulin sensitizers and anti-obesity agents exist. Mazindol maintains body weight after obesity therapy and treats obesity-related diseases such as diabetes, hypertension, and hyperlipidemia[9], but has side effects including tremor, nausea, vomiting, and diarrhea. Therefore, novel anti-diabetic and anti-obesity agents are required.

The kidney is important in glucose metabolism; it is a target for therapeutic intervention[10]. Sodium-glucose cotransporter 2 (SGLT2) mediates glucose reabsorption from the proximal renal tubule[10]. SGLT2 inhibition induces glucosuria and lowers blood glucose in diabetes, and a lowers hypoglycemic risk[10]. 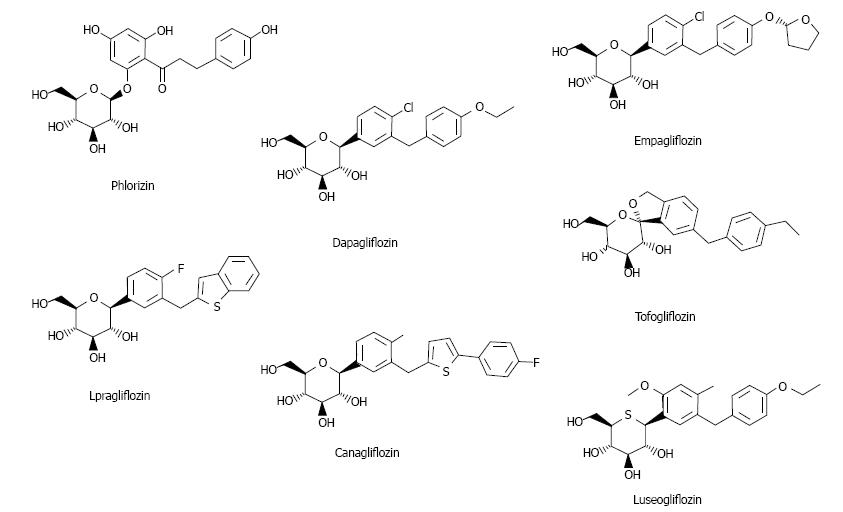 Effect of ipragliflozin on the pharmacokinetics of other medications

AUCinf or Cmax of single doses of sitagliptin, piog-litazone, or glimepiride[25] were unaffected by multiple doses of ipragliflozin; the combination was well tolerated in healthy subjects[25]. Ipragliflozin (300 mg qd) and metformin together were well tolerated in T2DM patients; the addition of ipragliflozin did not result in a clinically relevant change in the pharmacokinetic properties of metformin[26]. Dose adjustments may not be required when ipragliflozin is administered with other glucose-lowering drugs[25].

Effect of moderate hepatic impairment on the pharmacokinetics of ipragliflozin

EFFICACY AND COMPARATOR STUDIES WITH OTHER SGLT2 INHIBITORS
HbA1c 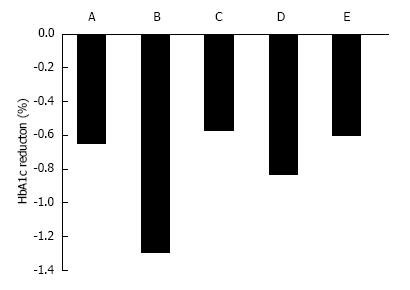 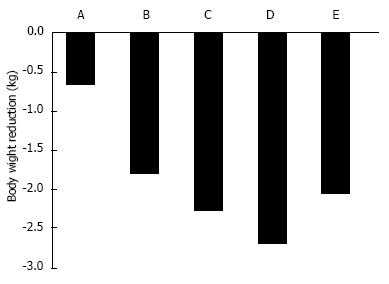 Chronic hyperglycemia induces β-cell dysfunction and insulin resistance[38]. SGLT2 inhibitors improve glucose toxicity and glycemic control[3]. There are no clinical reports on effect of ipragliflozin on β-cell function but ipragliflozin increased insulin content in the pancreas and suppressed the loss of insulin-positive cells in islets of db/db mice, an animal model of T2DM[3,39].

Proinsulin/insulin (PI/I) ratio reflects β-cell dys-function associated with the onset and progression of T2DM[40,41]. Mitiglinide improved the postprandial insulin secretion profile, suppressed the postprandial glucose spike, and improved the PI/I ratio in T2DM patients with low insulin resistance and low triglyceride levels[42]. Dose-related decreases in proinsulin/insulin ratio of 0.5 and 0.8 pmol/mIU were observed with canagliflozin at 100 and 300 mg, respectively, compared with placebo, and decreases in proinsulin/C peptide ratio were also seen with both doses of canagliflozin[37]. These results suggest that SGLT2 inhibitors improve β-cell function.

In ipragliflozin phase 3 trial, treatment-emergent urinary tract infections (UTIs) were reported in 32/412 patients across all treatment groups, including placebo[28]. Infections were symptomatic and asymptomatic in 9 and 23 patients, respectively[28]. A total of 14 patients experienced treatment-emergent genital tract infections but there was no evidence that the frequency was related to the dose of ipragliflozin[28]. All events were treated with antifungal or antibacterial agents and were resolved prior to the final study visit (except three)[28]. In canagliflozin phase 3 trial, the incidence of genital mycotic infections, UTIs, and osmotic diuresis-related adverse events was higher in the treatment group[37]. UTIs were observed in 5%-12% of dapagliflozin-treated patients (with no clear dose relationship) compared with 6% of placebo-treated patients and 9% of metformin-treated patients[34]. Genital infections were observed in 2%-7% of dapagliflozin treated patients, 0% of placebo-treated patients, and 2% of metformin-treated patients[34]. Therefore, STLT2 inhibitors might increase the risk of UTIs.

An increased incidence of bladder and breast cancer was indicated in patients receiving dapagliflozin compared with controls[47]. Data on bladder and breast cancer were retrieved from regulatory databases and other sources to produce a pool of 5501 patients (at least 5000 patient-years of exposure to dapagliflozin), and a total of 3184 patients (at least 2350 patient-years of exposure to placebo or an active comparator)[49,50]. Nine cases of bladder cancer were identified in patients treated with dapagliflozin compared with one case in patients receiving placebo[49,50]. The number of observed cases exceeds the expected number in the general diabetic population[47]. UTIs may increase the risk of bladder cancer. However, early detection after short exposure and potential detection bias related to frequent urinalysis mitigate against a causative relationship[47]. Therefore, no robust conclusions can be drawn, pending accumulation of long-term data[47].

There were 9 cases of breast cancer in the dapagliflozin group (2223 patients) compared with one case in the placebo group (1053 patients), diagnosed within the first year of the study[47]. These figures were higher than the predicted number of 7.1 cases based on the Surveillance Epidemiology and End Results (SEER) program[51]. It remains uncertain whether the use of dapagliflozin is associated with an increased risk of breast cancer and further studies are needed[47]. There are no reports indicating that other SGLT2 inhibitors are associated with an increased risk of cancer[3].

Patient-focused data on quality of life, satisfaction, and acceptability

One study investigated effect of ipragliflozin on quality of life[28]. Outcomes were assessed using the European Quality of Life-5 Dimensions (EQ-5D)[53], Audit of Diabetes-Dependent Quality of Life (ADDQoL)[54], and Diabetes Medication Satisfaction (Diab-MedSat) questionnaires[55]. No differences were observed in EQ-5D domains or ADDQoL scores at week 12[28]. However, mean changes in EQ-5D visual analogue scale scores from baseline to week 12 showed positive changes in the treatment groups, suggesting improvements in perceived health status[28]. Changes in Diab-MedSat scores for burden and symptoms were small and similar across all treatment groups, but changes in the efficacy score from baseline to week 12 were greater for the ipragliflozin groups[28]. Another study reported that changes from baseline to week 12 in EQ-5D domains and ADDQoL scores were small across all treatment groups but with a non-statistically significant trend for improvement in the ipragliflozin treatment groups[33]. These results suggest that the SGLT2 inhibitor ipragliflozin may improve the quality of life in T2DM patients.

There are no clinical reports on ethnic differences in effects of ipragliflozin. However, past reports imply that ipragliflozin reduces HbA1c more in Japanese patients compared with Western patients (Figure 2)[28,29]. The mechanism is unclear, but a meta-analysis reported that DPP-4 inhibitors were associated with a reduction in HbA1c of 0.65% in non-Japanese randomized, controlled trials (RCTs; 55 patients), compared with 1.67% in Japanese RCTs[56]. There may be pharmacogenetic or cultural lifestyle differences that contribute to the larger reduction in HbA1c in Japanese patients. Japanese people have a greater amount of abdominal visceral fat relative to abdominal subcutaneous fat compared with Caucasians[57]. Dapagliflozin reduced visceral adipose tissue more than subcutaneous adipose tissue[35]. Therefore, the difference in visceral adipose tissue between Japanese and Western T2DM patients may contribute to the difference in effect of SGLT2 inhibitors.

CONCLUSIONS AND PLACE IN THERAPY ALONGSIDE OTHER SGLT2 INHIBITORS