The global incidence and prevalence of diabetes mellitus (DM) have reached epidemic proportions. Estimates indicate that more than 360 million people will be affected by DM by 2030. All of these individuals will be at risk of developing diabetic retinopathy (DR). It is extremely important to categorize, classify and stage the severity of DR in order to establish adequate therapy. With proper management more than 90% of cases of visual loss can be prevented. The purpose of the current paper is to review the classification of DR with a special emphasis on the International Clinical Disease Severity Scale for DR. This new classification is simple to use, easy to remember and based on scientific evidence. It does not require specialized examinations such as optical coherence tomography or fluorescein angiography. It is based on clinical examination and applying the Early Treatment of Diabetic Retinopathy Study 4:2:1 rule.

Core tip: The International Clinical Disease Severity Scale for diabetic retinopathy has been proposed to facilitate communication between diabetic care givers. This new classification is simple to use, easy to remember and based on scientific evidence. It does not require specialized examinations such as optical coherence tomography or fluorescein angiography. It is based on clinical examination and applying the Early Treatment of Diabetic Retinopathy Study 4:2:1 rule.

Currently the world faces a challenge of epidemic proportions called diabetes mellitus (DM). According to estimates of the World Health Organization, the number of people worldwide with DM will rise to 360 million by the year 2030[1]. DM is no longer a disease of rich developed countries. Changes in dietary habits, obesity and physical inactivity are responsible for spreading this epidemic into the developing countries. All individuals with DM will be at risk of developing diabetic retinopathy (DR).

DR is a progressive condition with microvascular alterations that lead to retinal ischemia, retinal permeability, retinal neovascularization and macular edema[2,3]. If left untreated patients with DR can suffer severe visual loss[4]. In developed countries DR constitutes the leading cause of blindness in the working age population[5] and has a considerable economic impact on society especially on healthcare systems[6-8]. Given that proper management of patients with DR can prevent more than 90% of cases of visual loss, it is extremely important to categorize, classify and stage the severity of DR in order to establish adequate therapy[9]. In particular, in diseases like DM where a multidisciplinary approach is needed, communication among colleagues of different medical specialties is crucial. It is imperative that retina specialists, general ophthalmologists, internists, and endocrinologists learn to speak the same language in order to provide patients with the care they deserve. The purpose of the current paper is to review the classification of DR with a special emphasis on the International Clinical Disease Severity Scale for DR.

In 1968 a group of experts met in Airlie House, Virginia to discuss what was known at the time about DR. An important outcome of that symposium was the development of a standarized classification of DR[10]. This classification was modified and used in the Diabetic Retinopathy Study (DRS). Briefly, it consisted of comparing stereophotographs in 7 standard photographic fields with the patient’s findings in those same 7 photographic fields[11]. This same classification was modified for use in the Early Treatment of Diabetic Retinopathy Study (ETDRS). It became the gold standard for many years. The modified Airlie House Classification of DR is based on grading of stereophotographs of 7 fields and classifies DR into 13 complex levels ranging from level 10 (absence of retinopathy) to level 85 (severe vitreous hemorrhage or retinal detachment involving the macula)[12]. It is an excellent tool in the research setting but its clinical applicability is limited due to its complexity. Most ophthalmologists do not use this classification in their daily clinical work.

Others have divided diabetic macular edema (DME) into focal and diffuse subtypes[13]. Focal DME was initially defined as edema caused by focal leakage of microaneurysms. Clusters of microaneurysms are usually surrounded by a circinate ring of hard exudate. In contrast, diffuse DME is caused by a generalized breakdown of the inner blood/retinal barrier. Microaneurysm, retinal capillaries and even arterioles contribute to the leakage. Hard exudates are usually not seen in diffuse DME[13]. As time went by, others included FA findings in their definition of diffuse or focal DME. In the ETDRS, the proportion of microaneurysmsal fluorescein leakage was used to differentiate between focal and diffuse DME. Eyes with ≥ 67% of leakage originating from microaneurysms were classified as having focal DME. Eyes with microaneurysmsal leakage between 33% and 66% were determined to have intermediate DME. Eyes with ≤ 33% microaneurysmal leakage were classified as having diffuse DME[14]. Others have also included OCT findings[15,16]. As Browning et al[17] point out, the terms focal and diffuse DME have various definitions and mean different things to different people. Furthermore, since the terms do not seem to predict treatment outcomes they suggest that their use should be discouraged until an agreement is reached[17].

In an attempt to simplify the classification of DR, a number of experts met and created the International Clinical Disease Severity Scale for DR[18]. This disease severity scale is based upon the findings of the Wisconsin Epidemiologic Study of Diabetic Retinopathy (WESDR) and the ETDRS. This new classification is simple to use, easy to remember and based on scientific evidence. There are five stages that are recognized. The first is “no apparent retinopathy”. As the name implies there are no diabetic fundus changes. The second stage is “mild non-proliferative retinopathy” (NPDR). This stage is characterized by the presence of a few microaneurysms. The third stage is “moderate NPDR” which is characterized by the presence of microaneurysms, intraretinal hemorrhages or venous beading that do not reach the severity of the standard photographs 2A (Figure 1A), 6A (Figure 1B) and 8A (Figure 1C). “Severe NPDR”, the fourth stage, is the key level to identify. Data from the ETDRS has shown that eyes in patients with DM type 2 that reach the grade of severe NPDR have a 50% chance of developing high risk characteristics if laser treatment is not instituted[19]. The diagnosis of severe NPDR is based on the 4:2:1 rule of the ETDRS[20]. Using standard photographs 2A, 6A and 8A to compare with the fundus findings, one can easily diagnose severe NPDR[20]. If hemorrhages of at least the magnitude of standard photograph 2A are present in all 4 quadrants, then by definition severe NPDR is present. If 2 quadrants or more have venous beading (VB) of the same magnitude or greater than standard photograph 6A, then by definition severe NPDR is present. If one or more quadrant has intraretinal microvascular abnormalities (IRMA) of the same magnitude or greater than standard photograph 8A, then by definition severe NPDR is present. The final stage is “proliferative diabetic retinopathy” (PDR). PDR is characterized by neovascularization of the disc, neovascularization of the retina, neovascularization of the iris, neovascularization of the angle, vitreous hemorrhage or tractional retinal detachment. With regards to macular edema, it should be noted if macular edema is present or absent. If it is present then it can be further classified as mild, moderate and severe depending on the distance of the exudates and thickening from the center of the fovea[18] (Figure 2). 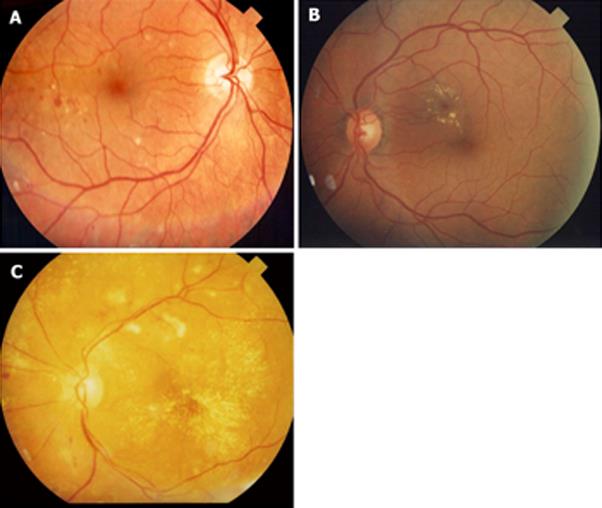 The investigators from the ETDRS recognized that some diabetic features could be assessed better with fluorescein angiograms (FA) than clinical fundus photographs. Thus the ETDRS also classified DR from FA. The ETDRS protocol consisted of stereoscopic FA of two 30° fields that extended along the horizontal meridian from 25° nasal to the disc to 20° temporal to the macula. Patient findings were compared to standarized photographs. In the early-mid phase of the FA, the foveal avascular zone (FAZ), capillary loss, capillary dilatation, arteriolar and RPE abnormalities were assessed. Fluorescein leakage, fluorescein leakage source and cystoid changes were graded during the late FA phase[21]. This fluorescein angiographic classification scheme is time consuming, complex and ideal for the research setting but not for regular clinical use.

Optical coherence tomography (OCT) is a non-invasive, noncontact transpupillary imaging modality that has revolutionized ophthalmic clinical practice. It utilizes light to image tissue using low coherence interferometry. OCT offers several advantages over slit lamp biomicroscopy and FA. OCT produces cross sectional images of the macula allowing objective evaluation of macular thickness and evaluation of the vitreomacular interface[22]. However, it must be noted that there is poor correlation between macular thickness and visual acuity[23]. The main disadvantage of OCT is the cost the required equipment, which limits its availability.

Several OCT patterns of morphological macular changes associated with DME have been described[16]. These include diffuse retinal thickening, cystoid macular edema, posterior hyaloidal traction, serous retinal detachment and tractional retinal detachment. These patterns are not exclusive of each other and may co-exist with one another. Despite attempts to implement an OCT-based classification of DME[24], there has been no consensus on its use. A Cochrane review concluded that there is substantial disagreement between the OCT findings and CSME as defined by clinical examination[25]. Nevertheless the changing treatment paradigm of DME, where anti-VEGF agents are increasingly being used in the management of DME, demonstrates that OCT is an essential tool in the current management of this condition[26].

DR has a significant impact on the quality of life of patients with diabetes. The fact that a high percentage of visual loss can be prevented through laser, pharmacological or surgical treatment places great importance on the proper detection and classification of patients with DR especially those with severe NPDR who are at great risk for developing visual loss[19]. The International Clinical Disease Severity Scale has been developed[18]. This new classification is simple to use, easy to remember and based on scientific evidence. It does not require specialized examinations such as OCT or FA. It is based on clinical examination and applying the ETDRS 4:2:1 rule. Its use should be encouraged[27]. As new technologies for the evaluation of DR become available, current classification systems may be substituted or enhanced but the basis of DR staging established by landmark clinical trials such as the ETDRS and DRS will most likely remain the same.