Polycystic ovary syndrome (PCOS) is the most common endocrinopathy in women of reproductive age associated with long-term metabolic and cardiovascular consequences. A plethora of symptoms and their severity differentiate on an individual level, giving the syndrome numerous phenotypes. Due to menstrual cycle abnormalities, women suffer from irregular menstrual bleeding, difficulty in conception, and infertility. Furthermore, the risk of pregnancy complications such as gestational diabetes mellitus, hypertensive disorders of pregnancy, and preterm birth are higher in women with PCOS than in the general population. Often, women with PCOS have comorbidities such as dyslipidemia, obesity, glucose intolerance or diabetes type 2, non-alcoholic fatty liver disease, and metabolic syndrome, which all influence the treatment plan. Historic insulin-sensitizing agents, although good for some of the metabolic derangements, do not offer long-term cardiovascular benefits; therefore, new treatment options are of paramount importance. Sodium-glucose co-transporter-2 (SGLT-2) inhibitors, a new class of antidiabetic agents with beneficial cardiovascular, bodyweight, and antihyperglycemic effects, although not approved for the treatment of PCOS, might be an attractive therapeutic addition in the PCOS armamentarium. Namely, recent studies with SGLT-2 inhibitors showed promising improvements in anthropometric parameters and body composition in patients with PCOS. It is important to further explore the SGLT-2 inhibitors potential as an early therapeutic option because of the PCOS-related risk of metabolic, reproductive, and psychological consequences.

Core Tip: Sodium-glucose co-transporter-2 (SGLT-2) inhibitors are a new class of antidiabetic agents with beneficial cardiovascular, bodyweight, and antihyperglycemic effects. Although not approved for the treatment of polycystic ovary syndrome (PCOS), they might be an attractive therapeutic addition for the related metabolic, reproductive, and psychological consequences. Recent studies with SGLT-2 inhibitors in PCOS patients showed promising improvements in anthropometric parameters and body composition. Thus, it is important to explore the SGLT-2 inhibitors potential as an early therapeutic option in PCOS due to its high cardiometabolic risk.

Polycystic ovary syndrome (PCOS) is a complex condition defined by metabolic, fertility, and psychological consequences, with a prevalence of up to 20% among females of reproductive age[1]. It is diagnosed according to Rotterdam criteria (2 of the following): Oligo- or anovulation, clinical and/or biochemical hyperandrogenemia, or polycystic ovarian morphology on ultrasound[2]. Underlying pathologic processes create a broad spectrum of clinical and laboratory abnormalities. The underlying mechanisms are still inconclusive, however certain genetic traits[3-5], altered gonadotropin secretion[6,7], faulty ovarian follicle maturation[8], and insulin resistance (IR)[9] are considered the most important etiological factors. IR leads to hyperinsulinemia which precipitates hyperandrogenaemia by stimulating ovarian androgen secretion and inhibition of hepatic sex hormone-binding globulin (SHBG) production[10].

A plethora of symptoms and their severity differentiate on an individual level, giving the syndrome numerous phenotypes. Due to menstrual cycle abnormalities, women suffer from irregular menstrual bleeding, difficulty in conception, and infertility. Furthermore, the risk of pregnancy complications such as gestational diabetes mellitus, hypertensive disorders of pregnancy, and preterm birth are higher in women with PCOS than in the general population[11,12].

Although cardiometabolic risk factors are not part of the PCOS diagnostic criteria, they impact the treatment and prognosis[13]. Metabolic issues related to PCOS increase the risk for long-term consequences such as dyslipidemia, obesity, glucose intolerance[14], diabetes type 2[15-17], low-grade chronic inflammation[18], non-alcoholic fatty liver disease[19,20] and metabolic syndrome[21,22]. Consequently, all women with PCOS should be assessed for cardiovascular risk factors and global cardiovascular disease risk[2].

Treatment goals for PCOS include diminishing clinical hyperandrogenism, managing menstrual dysfunction, preventing endometrial hyperplasia and carcinoma, accomplishing ovulation in pursuit of pregnancy, and regulating metabolic issues in the long term. Lifestyle changes and weight loss are the cornerstones of treatment[23]. Oral contraceptives (OCs) are the first line of PCOS pharmacotherapy due to their effect on hyperandrogenism, menstrual irregularity, and endometrial carcinoma prevention[2,24]. In cases of prevalent hyperandrogenism despite OCs, antiandrogens can be added. When pursuing pregnancy, ovulation induction should be considered with clomiphene citrate, letrozole, and, rarely, gonadotropins[25]. If weight loss and ovulation induction are not successful, the next step is in vitro fertilization.

In the case of metabolic derangements, insulin-sensitizing agents, primarily metformin and thiazolidinediones, are widely used as an alternative or add-on to OCs[26,27]. Studies of newer glucose-lowering agents, such as glucagon-like peptide-1 receptor analogs (GLP-1RA) used for the treatment of obese women with PCOS, revealed a reduction of body weight, increase in menstrual frequency, and improvement of hyperandrogenemia and metabolic derangements even more effectively than metformin[28,29]. The down-side of the mentioned therapy might be a subcutaneous way of application.

One of the most important pathophysiological processes involved in PCOS development includes IR. The prevalence of IR in PCOS is high: it affects 75% of lean and 95% overweight women[30]. IR represents a link towards increased cardiometabolic risk leading to conditions such as hypertension, glucose intolerance or diabetes, dyslipidemia, and obesity[9,31].

Up to 70% of PCOS women demonstrate IR, glucose intolerance, and overt diabetes[32]. An American study on Women's Health Across the Nation showed a higher prevalence of impaired glucose tolerance (IGT) in PCOS (25%) compared to controls (9.2%)[33]. Moreover, a recent meta-analysis in women with PCOS demonstrated an increased prevalence of type 2 diabetes (T2DM) (odds ratio = 2.87, 95%CI: 1.44-5.72)[34]. Interestingly, 15%-36% of all T2DM diagnosed in women, irrespective of age, is found in association with PCOS. Women with PCOS often exhibit insulin secretory impairment, which accelerates the progression from IGT to T2DM 5 to 10-fold compared to the non-PCOS population, leading to prevalence rates of T2DM 5 to 7-fold higher than those reported in population-based studies of women aged 20-44 years[15,35].

In addition, dyslipidemia occurs in up to 70% of women with PCOS, most commonly characterized by high triglyceride, increased small dense LDL-C levels, and low HDL-C levels[36]. Obesity is also highly prevalent in PCOS; up to 60% of women with PCOS have body mass index (BMI) in the overweight or obesity range, which predisposes them to IR, gonadotropin secretion disturbances, hyperandrogenemia, and low SHBG secretion[37-39]. Consequently, metabolic syndrome is commonly found in women with PCOS (prevalence of 33%-47% in the United States, and 8%-25% in other countries)[36].

ROLE OF SGLT-2 INHIBITORS IN PCOS

Multiple metabolic disorders are well recognized among PCOS patients, so assessing the glycemic status is essential. If IGT is detected, lifestyle interventions together with insulin-sensitizing agents such as metformin and thiazolidinedione can be added to improve insulin sensitivity[31]. There are no dedicated metformin studies to confirm its effects on superior BMI reduction compared to placebo or decrease in central adiposity, a good marker for metabolic syndrome[26,27]. Incretins, primarily GLP-1RAs, have the potential to overcome metabolic derangements of PCOS and adding cardiovascular benefits. However, their use is limited by the need for subcutaneous application, while dipeptidyl peptidase-4 inhibitors, oral incretin therapy, lack the evidence of cardiovascular protection in recently published dedicated CVOTs[40]. Therefore, there is still a considerable demand for safe and effective therapeutic agents, offering solutions against PCOS's metabolic dysregulation.

Although SGLT-2 inhibitors are not approved for PCOS treatment, this class of antidiabetic drugs could be useful for PCOS patients due to beneficial glycemic and cardiovascular effects, which are often an issue in women affected by PCOS[41] (Figure 1). 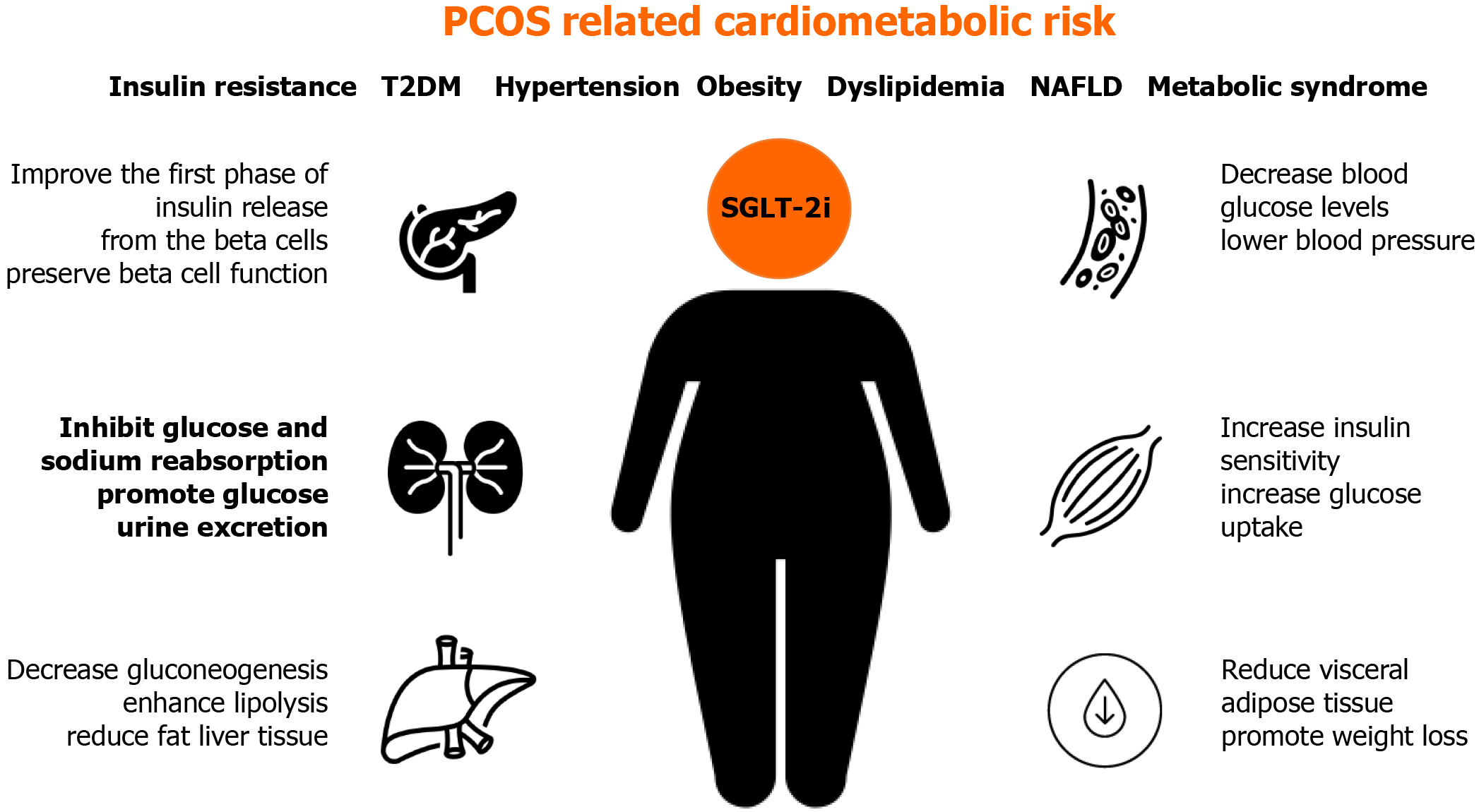 SGLT receptors are not found on ovaries, but their inhibition can indirectly improve metabolic status disrupted in certain PCOS patients. The role of SGLT-2 inhibitors in the treatment of PCOS is not yet well studied. Their mode of action can contribute to several pathophysiologic disorders in PCOS, including previously mentioned IR, hypertension, obesity, and dyslipidemia. By binding to SGLT-2 receptors in the proximal convoluted tubule of the kidney, gliflozins inhibit glucose and sodium reabsorption, causing a decrease in blood glucose levels, glucosuria, and natriuresis, which contributes to lowering blood pressure. Gliflozins promote glucose urine excretion by 60-80 g per day (approximately 240-320 kcal/d), promoting weight loss by approximately 1.7 kg. The action of SGLT-2 inhibitors does not depend on insulin secretion, beta-cell function, or IR[42,43].

SGLT-2 inhibitors achieve a further reduction in blood glucose levels by increasing insulin sensitivity, increasing glucose uptake in the muscle, decreasing gluconeogenesis in the liver, and improving the first phase of insulin release from the pancreatic beta-cells.

All mentioned processes improve metabolic profiles in diabetic patients, including lipid levels and serum uric acid levels, which could also be beneficial for PCOS patients[44]. Research also suggests the role of SGLT-2 inhibitors in preserving beta-cell function by indirectly reducing insulin secretion and promoting glucagon secretion. The latter plays a role in enhancing lipolysis and reducing the liver and visceral adipose tissue[45].

Besides the expected effect of SGLT-2 inhibitors on glycemic control, they are also shown to be cardioprotective[46], which is an important benefit regarding an increased risk of cardiovascular disease in PCOS.

So far, only one randomized controlled trial compared the effects of empagliflozin (25 mg) vs metformin (1500 mg) on anthropometric and body composition, hormonal and metabolic parameters in 39 women with PCOS. Group treated with empagliflozin showed beneficial effects on weight, BMI, waist circumference and hip circumference, and total body fat in overweight and obese women with PCOS compared to metformin, but no differences were seen in hormonal and metabolic parameters, including IR and androgen levels[47]. The study comparing the effects of another SGLT-2 inhibitor, canagliflozin vs metformin in PCOS, is still underway (Clinical Trial Gov Identifier: NCT04700839).

Until more research confirms the positive metabolic effect of SGLT-2 inhibitors in PCOS patients, the mainstream treatment option will be lifestyle intervention, metformin, and oral contraceptive pills[24]. However, this treatment strategy does not successfully address long-term cardiometabolic consequences of PCOS[48], so SGLT-2 inhibitors, due to their mode of action, emerge as a potential new treatment option for PCOS.