Cystic fibrosis (CF) is a common autosomal recessive disease. Life expectancy of patients with CF continues to improve mainly driven by the evolving therapies for CF-related organ dysfunction. The prevalence of CF-related diabetes (CFRD) increases exponentially as patients’ age. Clinical care guidelines for CFRD from 2010, recommend insulin as the mainstay of treatment. Many patients with CFRD may not require exogenous insulin due to the heterogeneity of this clinical entity. Maintenance of euglycemia by enhancing endogenous insulin production, secretion and degradation with novel pharmacological therapies like glucagon-like peptide-1 agonist is an option that remains to be fully explored. As such, the scope of this article will focus on our perspective of glucagon-like peptide-1 receptor agonist in the context of CFRD. Other potential options such as sodium-glucose cotransporter-2 and dipeptidyl peptidase 4 inhibitors and their impact on this patient population is limited and further studies are required.

Core tip: Cystic fibrosis-related diabetes is a heterogeneous entity. Currently, insulin is the agent of choice to maintain euglycemia on this patient population. Novel therapies like glucagon-like peptide-1 agonist offer an opportunity to reevaluate the way we approach this disease.

Cystic fibrosis (CF) is a common autosomal recessive disease that has been described to affect Caucasians and, to a lesser extent, other populations, affecting up to 1 person per every 3000 live births[1] in the United States. Its pathogenesis is secondary to a defect in the CF transmembrane conductance regulator (CFTR) gene that encodes for a homonymous membrane protein that conducts chloride ions across epithelial cell membranes, resulting in dysregulation of the normal pH and ionic balance of physiologic secretions and subsequent multiorgan dysfunction[2].

Despite discrepancies in the median age at death between different patient populations[3], the life expectancy of patients with CF continues to improve mainly driven by the evolving therapies for CF-related organ dysfunction. However, new challenges in the form of chronic-degenerative diseases arise from this increased life expectancy. The prevalence of CF-related diabetes (CFRD) increases exponentially when patients reach adulthood[4,5].

CFRD is a unique disease that combines features of patients with type 1 and type 2 diabetes mellitus (T1DM and T2DM) such as impaired insulin secretion and peripheral insulin resistance[6]. Due to the heterogeneity of CF, it is difficult to predict which patients will go on to develop CFRD. Some mutations, however, have a higher prevalence and predisposition to develop the disease and are associated with pancreatic exocrine dysfunction[7].

CFTR plays a dual role in insulin/glucagon hemostasis. Abnormal intracellular accumulation of chloride in β cells impairs their ability to depolarize in response to glucose, diminishing insulin release. In α cells, normal glucagon suppression is impaired by the inability of the cells to hyperpolarize in presence of high intracellular chloride, resulting in uncontrolled secretion of glucagon by potentiating adenosine triphosphate-sensitive K+ channels[8-10] (Figure 1). 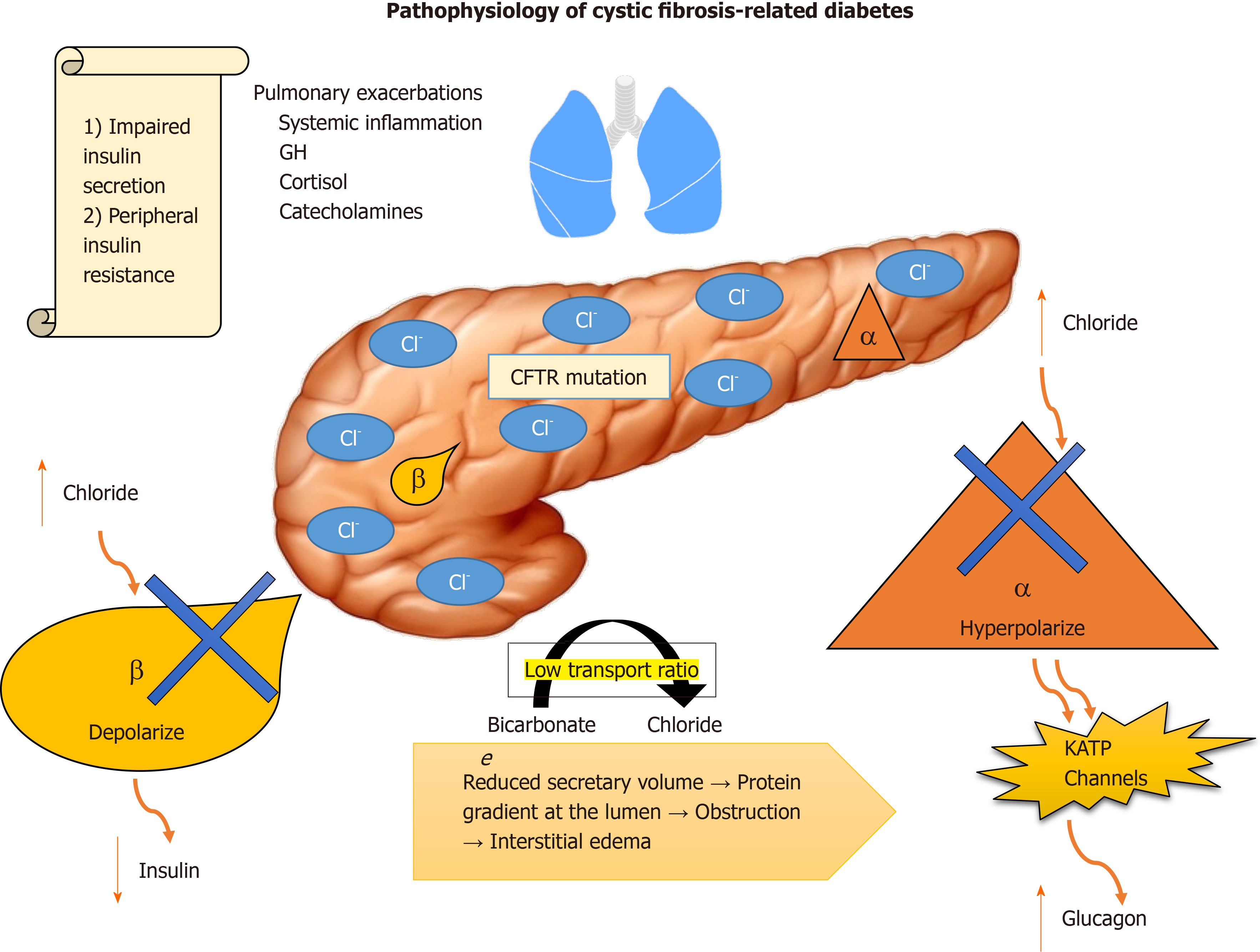 Exocrine pancreatic insufficiency is an independent factor that must be accounted for. The low bicarbonate to chloride transport ratio, which reduces secretory volume, creates a protein gradient at the lumen, resulting in obstruction and interstitial edema[11]. Evidence suggests that, overtime, the resulting histopathological changes correlate with progression of the disease, damaging islet cells. Furthermore, CFRD patients have low levels of gastric inhibitory polypeptide (GIP) and glucagon-like peptide-1 (GLP-1), which contributes to postprandial glycemic excursions and lower secretion of insulin[12,13].

Insulin resistance is associated with the fluctuant systemic inflammatory process associated with the counterregulatory response of growth hormone, cortisol and catecholamines that are released as a response to frequent pulmonary exacerbations and their treatment with steroids that these patients are typically exposed to.

THE ROLE OF INCRETINS AND GLUCAGON-LIKE PEPTIDE-1 RECEPTOR AGONIST

The most recent version of the clinical care guidelines for CFRD from 2010 recommend insulin as the mainstay of treatment[14]. With the advent of GLP-1 receptor agonists (GLP-1 RA) this could change in the future for certain subtypes of the disease in which β cell structure remains preserved, but function is impaired, similar to patients with T2DM[15].

GLP-1 RA ameliorate the pathophysiology that has been previously explained (see above) by improving insulin release and slowing gastric emptying, improving glycemia[16]. Interestingly, these effects have been reproduced in the past, when GLP-1 RA were not available in the market by using pancreatic enzymes as a replacement of the exocrine function of the pancreas[17]. However, approximately 20% of the patients had refractory disease due to the diminishing bicarbonate levels secreted by the pancreas to the intestine, delaying and impairing the effectiveness of fat absorption while worsening prandial glycemic excursions as a result[18].

Currently, very few studies have been published and even less are underway to address the use of GLP-1 RA, dipeptidyl peptidase 4 inhibitors or sodium-glucose cotransporter-2 inhibitors based therapies in the treatment of CFRD. One of the limitations when designing these studies is the target population. As demonstrated by Geyer et al[19], exenatide demonstrated to be an effective treatment option for patients with early-onset CFRD. However, it is important to note this study was done in the pediatric population, which is arguably less affected by CFRD. Another point to consider is how heterogeneous the patient population can be due to differences in mutations and residual function of the CFTR protein in individuals that would be treated with this novel therapy.

One of the issues with GLP-1 RA in this patient population is weight loss, which is not desirable in this context. Classically, diabetic patients must limit their carbohydrate and caloric intake to limit glycemic excursions[5]. This conflicts with the current recommendations that seek to maintain a good nutritional status with high fat diets, frequent snacking and weight gain, which is associated with good prognosis[20], although this is a more important marker for early stages of the disease, which might not be applicable to CFRD since these patients usually present when they are older than 18 years of age.

With the advent of newer, novel CFTR modulating therapies such as Lumacaftor/Ivacaftor, attempts have been made to determine if these novel treatments have an impact in CFRD and related conditions[21-23] despite lack of a direct mechanism of action since β cells do not express CFTR[24]. It has been proposed that increased levels of GLP-1 and GIP with preservation of exocrine and endocrine pancreatic functions are the main drivers of these positive effects. Large randomized controlled trials are needed to verify and validate these findings[25], which also go in favor towards a broader utilization of novel therapies for CFRD.

Many patients with CFRD may not require exogenous insulin despite this being the approved therapy for all forms of CFRD despite the heterogeneity of CF as a clinical entity. Maintenance of euglycemia by enhancing endogenous insulin production, secretion and degradation via improved incretin (GLP-1 and GIP) stabilization and/or exogenous administration might play a central role that is currently not fully exploited.