Diabetes affects approximately 30 million persons in the United States. Diabetes ketoacidosis is one of the most serious and acute complications of diabetes. At the time of presentation and during treatment of diabetic ketoacidosis (DKA), several metabolic and electrolyte derangements can ultimately result in respiratory compromise. Most commonly, hypokalemia, hypomagnesemia and hypophosphatemia can eventually lead to respiratory muscles failure. Furthermore, tachypnea, hyperpnea and more severely, Kussmaul breathing pattern can develop. Also, hydrostatic and non-hydrostatic pulmonary edema can occur secondary to volume shifts into the extracellular space and secondary to increased permeability of the pulmonary capillaries. The presence of respiratory failure in patients with DKA is associated with higher morbidity and mortality. Being familiar with the causes of respiratory compromise in DKA, and how to treat them, may represent better outcomes for patients with DKA.

Diabetes ketoacidosis (DKA) is one of the most serious and acute complications of diabetes. It is characterized by moderate hyperglycemia (blood glucose usually between 250 mg/dL and 800 mg/dL at presentation), metabolic acidosis, and presence of serum ketones with an elevated anion gap[1]. It represents an extreme in the spectrum of hyperglycemia and presentation of complicated diabetes.

The presence of DKA is accompanied by several electrolytes, metabolic and acid-base derangements that affect the respiratory system. Depletion of ions, such as potassium and phosphate, affect the respiratory muscles leading to acute respiratory failure[3]. Reduction in colloid osmotic pressure increases lung water content, leading to noncardiogenic pulmonary edema and decrease in lung compliance[4,5]. As a compensatory mechanism, the presence of metabolic acidosis will cause hyperventilation[6].

Respiratory failure in DKA has been associated with increased morbidity and mortality[3,7]. In this review, we analyze the common electrolytes, metabolic and acid-base abnormalities seen in DKA, their association with respiratory failure and its management.

Potassium, magnesium and phosphorous are intracellular ions which serum concentrations decrease as a direct consequence of hyperglycemia and ketoacidosis (potassium), or as a consequence of the correction of acidosis with insulin (magnesium and phosphorous). A major goal in the treatment of DKA is to closely monitor these ions concentrations as DKA is corrected. Also, replace them on a timely fashion in order to prevent them from reaching critically low values. The clinical significance of their deficit is discussed below.

Patients being admitted for DKA usually have a total body potassium deficit that averages 300 to 600 mEq[8]. Osmotic diuresis is provoked by the hyperglycemia resulting from lack of insulin. In an attempt to maintain osmolality, the kidneys will retain sodium ions at the expense of potassium ions[9]. Furthermore, when acidosis is present, hydrogen ions from the bicarbonate nucleus will be reabsorbed at the expenditure of potassium[10].

The gastrointestinal tract is also responsible for potassium loss in DKA. The body will try to maintain osmotic pressure at the cost of tissue and serum electrolytes. An acute hyperkalemia will happen when potassium shifts into the extracellular fluid (ECF), causing gastric cells to preserve hydrogen ions concentration. Consequently, nausea, vomit and diarrhea will occur, promoting even more potassium loss[11,12]. However, due to a shift of potassium from intracellular fluid into ECF caused by hyper osmolality and insulin deficiency, only 5% of patients with DKA will present with hypokalemia[8,13].

At presentation of DKA, the levels of serum magnesium are usually normal. Excessive amounts of magnesium are excreted during acidosis, secondary to insulin deficiency[17]. As the acidosis gets corrected, magnesium levels fall, reaching their nadir within the first 25 h of acidosis correction[18,19].

Muscular weakness and tetany associated with hypomagnesemia can affect the respiratory muscles, impairing ventilation in patients who are spontaneously breathing and delaying extubation of mechanically ventilated patients[22,23]. Empirical magnesium replacement has been associated with improvement of respiratory muscle power in patients with DKA[23].

When treating patients with DKA, clinicians should aim to keep magnesium levels at normal range, since hypomagnesemia is associated with weakness of the respiratory muscles.

Acidosis causes potassium shifts into the ECF and hyperglycemia causes phosphaturia by osmotic diuresis, which will ultimately lead to hypophosphatemia. However, DKA patients will present with normal phosphorous concentration due to the shift into the ECF associated with ECF volume concentration[24]. The true state of phosphate equilibrium is revealed with volume expansion[24,25].

Severe hypophosphatemia (< 1 mg/dL) is associated to the depletion of high-energy phosphate compounds in muscles, causing muscular weakness and rhabdomyolysis[3,26].

Acute muscular weakness caused by hypophosphatemia in DKA has been associated with hypercapnic respiratory failure and prolonged mechanical ventilation in critically ill patients[26-28].

Routine replacement of phosphorous in patients who presented with DKA is not beneficial and has been associated with worsening hypomagnesemia and causing hypocalcemia[29,30]. However, if serum phosphate concentration falls below 1 mg/dL, or if hypophosphatemia is associated with cardiac dysfunction or respiratory depression, it should be replaced[28,31,32].

The respiratory response usually begins within 30 min of metabolic acidosis onset, and is generally complete within 12-24 h However, a lag in respiratory compensation can occur when respiratory acidosis develops quickly; more than 4 meq/L of bicarbonate decrease in less than 6-12 h[34,35].

There is a limit to the lungs’ ability to compensate for metabolic acidosis. Even with serum bicarbonate concentrations below 6 meq/L, CO2 levels cannot fall lower than 8-12 mmHg[34]. Furthermore, the duration of the respiratory compensation is limited by respiratory muscle fatigue[33,36].

Initially, patients will develop tachypnea, which is increased respiratory rate, leading to decrease in CO2 concentration. With progression of acidosis, respiratory pattern evolves to hyperpnea, which is increased tidal volume, and ultimately, patients will develop a deep, fast and agonal pattern of breathing, named Kussmaul’s respiration (Figure 1A-D)[34,37]. 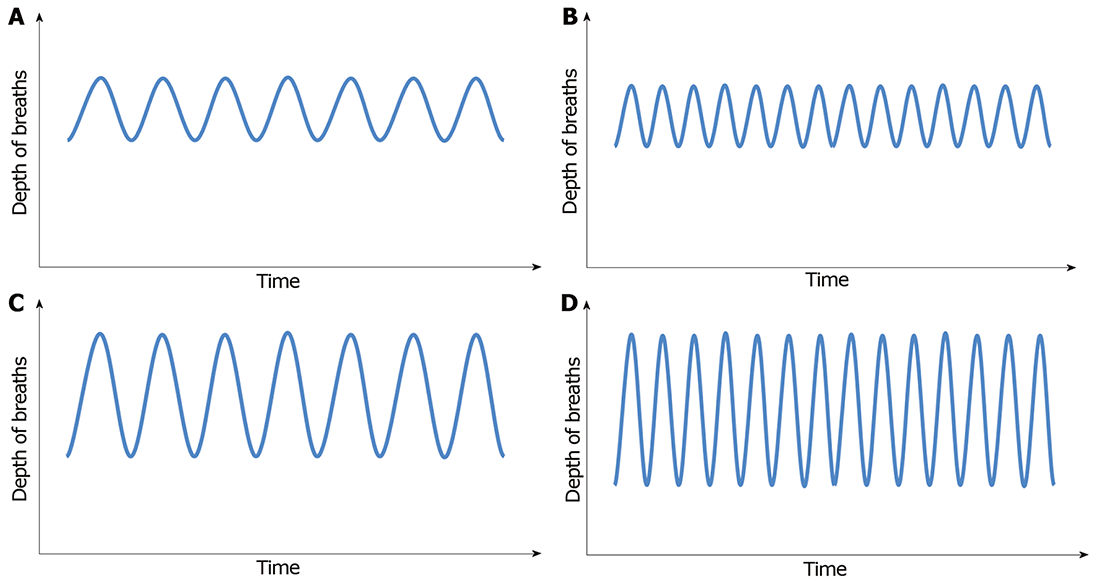 Once patients with DKA develop Kussmaul’s respiration, they are reaching the point of respiratory muscles fatigue, and mechanical ventilation should be considered[34,38-40]. Furthermore, patients in DKA are severely “air hungry” prior to intubation, and are at higher risk to develop acute respiratory distress syndrome (ARDS)[3,41] due to hyperpnea. Mechanical ventilation in these patients is particularly delicate, since a lung protective strategy, with low tidal volumes and controlled transpulmonary pressures, should be maintained, while attempting to increase minute-ventilation until metabolic acidosis is completely corrected[42,43].

There are two types of pulmonary edema that have been described in patients with DKA: One associated with elevated pulmonary venous pressure and another associated with increased pulmonary capillary permeability. The diagnosis is made based on clinical findings of dyspnea, an A-a gradient on arterial blood gas and chest image showing bilateral pulmonary infiltrates.

Also known as hydrostatic pulmonary edema, it is usually existent at presentation of DKA, is corrected during the treatment of DKA and is more common in patients with concomitant renal failure[44-47]. The occurrence of circulatory overload and pulmonary edema with elevated pulmonary venous pressure is a result of the acute shift of an abundant volume of fluid into the extracellular compartment. This fluid shift happens as a consequence of solute accumulation in the extracellular compartment secondary to hyperglycemia[44]. Therefore, correction of hyperglycemia shifts fluid back into cells, also correcting hydrostatic pulmonary edema. However, some patients might require hemodialysis and mechanical ventilation.

The degree of fluid shift and, consequently, the likelihood of developing hydrostatic pulmonary edema during a DKA episode are determined by the severity of hyperglycemia and by the volume status prior to the development of DKA[47]. The amount of fluid transferred from the cells into the extracellular space is directly proportional to the changes in serum glucose concentration[48]. The patients’ volume status at the time of hyperglycemia onset is also a determinant of the volume that will shift into the extracellular space. Patients with baseline low extremity edema and/or anasarca have been shown to shift larger amounts of fluid and have a higher incidence of pulmonary edema, than those patients who are euvolemic when becoming hyperglycemic[49].

ARDS can develop during the course of DKA or during its treatment[3], and it is more frequent and severe than hydrostatic pulmonary edema[54,55]. The mechanism of ARDS in DKA is not completely understood. The most accepted explanation is activation of lymphocytes and release of cytokines, especially interleukin-1, which serum levels are much higher during treatment of DKA[56-58].

The treatment of non-hydrostatic pulmonary edema in DKA is supportive. Focus should be on treating DKA and its exacerbating factor, early intubation and protective lung ventilation.