The addition of the dipeptidyl peptidase-4 (DDP-4) inhibitor has been reported to achieve greater improvements in glucose metabolism with fewer adverse events compared to increasing the metformin dose in type 2 diabetic patients. We present a patient with steroid-induced diabetes whose blood glucose levels were ameliorated by the use of the DPP-4 inhibitor, showing that the DPP-4 inhibitors may be an effective and safe oral anti-diabetic drug for steroid-induced diabetes.

In the March 2010 issue of World Journal of Diabetes, Filozof et al[1] demonstrated that the addition of the dipeptidyl peptidase-4 (DDP-4) inhibitor, vildagliptin, achieved greater improvements in glucose metabolism with fewer adverse events compared to increasing the metformin dose, suggesting the effectiveness of the DPP-4 inhibitor for type 2 diabetes mellitus. We agree with their suggestion and will introduce a patient with steroid-induced diabetes whose blood glucose levels were ameliorated by the use of the DPP-4 inhibitor, sitagliptin.

An 81-year-old female patient was treated daily with 20 mg prednisolone due to polymyalgia rheumatica (PMR) and developed steroid-induced diabetes. Her hemoglobin A1c level was 8.3% and 30-40 units of insulin aspart daily were used to treat hyperglycemia. Her symptoms of PMR were ameliorated and the daily dose of prednisolone was decreased. Since she refused to use insulin when out of hospital, we started oral anti-diabetic drugs. Her fasting blood glucose levels were normal and postprandial glucose levels and daily C-peptide levels in urine (141 mg/d) were remarkably elevated. Therefore, we started to use metformin, nateglinide and pioglitazone. However, her postprandial glucose levels did not decrease and 6-8 units of insulin aspart were needed (Figure 1). Higher doses of metformin and α-glucosidase inhibitor could not be used because of her abdominal symptoms. Then we changed from nateglinide to sitagliptin. After the change of therapy, her postprandial glucose levels were significantly decreased and finally the addition of insulin was not needed in spite of the reduced dose of pioglitazone due to lower limb edema (Figure 1). 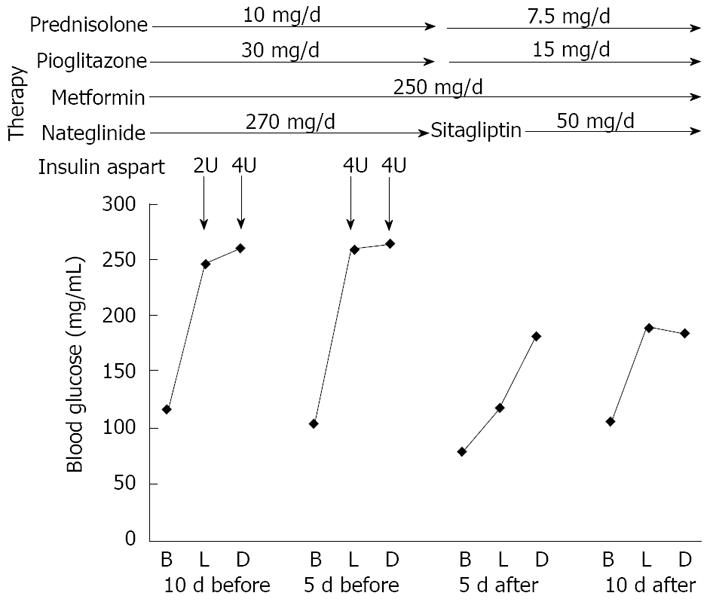 Figure 1 Changes of blood glucose levels before breakfast, lunch, and dinner, at 5 and 10 d before and after the modification of therapy. B: Breakfast; L: Lunch; D: Dinner.

Some patients treated with steroids show hyperglycemia, develop diabetes and sometimes need insulin therapy for marked hyperglycemia. The underlying mechanisms for steroid-induced diabetes may include increased gluconeogenesis and hepatic glucose output and insulin resistance. The characteristics for steroid-induced diabetes have been reported to be normal fasting plasma glucose levels and postprandial hyperglycemia[2]. The DPP-4 inhibitors prevent the inactivation of the incretin hormones which is released from the gut following food ingestion and in turn stimulates insulin secretion, inhibits glucagon secretion, improves hyperglycemia and insulin resistance and rarely induces hypoglycemia[3,4]. Furthermore, treatment with the DPP-4 inhibitors has been reported to increase pancreatic islet β-cell density and stimulate islet β-cell proliferation while preventing apoptosis and islet fibrosis and decreasing superoxide production and nitrotyrosine formation[5].

The DPP-4 inhibitors-mediated mechanisms for improvement of hyperglycemia may ameliorate steroid-induced postprandial hyperglycemia and not induce fasting hypoglycemia.

Our study has limitations. Since about 2 wk of routine treatment of thiazolidinediones is necessary to reach their obvious effect on insulin sensitivity, it is hard to distinguish the effect of blood glucose reduction that is attributed to the use of sitagliptin or that of pioglitazone. In view of this, it would be better to include a control in parallel. It should also be considered that steroid-induced diabetes has a tendency of self recovery after termination or decreased dose of glucocorticoids. This observation is based on only one patient. To elucidate the effectiveness of the DPP-4 inhibitor for steroid-induced diabetes, further studies, preferably with larger numbers of subjects, will be needed.