Core tip: The association of Castleman’s disease (CD) with epithelial malignancy is rare. To the best of our knowledge, the present case is the first report of a synchronous esophageal carcinoma and cervical CD. In the present case, we clinically diagnosed esophageal carcinoma with right cervical lymph nodes metastasis, T2N2M0, Stage IIIA preoperatively, but the stage was revised to pT1bN0M0, Stage IA on pathological diagnosis. Via histology, the swollen lymph nodes of the right cervical region revealed CD. This case demonstrates that cervical CD is rarely associated with an esophageal carcinoma and can clinically mimic nodal metastasis.

Castleman’s disease (CD), which is otherwise known as angiofollicular hyperplasia of the lymph node, is a rare lymphoproliferative disorder that was first described in 1956 by Castleman et al[1] as a benign proliferation of mediastinal lymphoid tissues of unknown etiology. CD most commonly develops in the mediastinum, and the cervical region is the second most common location. Clinically, CD manifests as localized disease (unicentric) or widespread disease (multicentric). The unicentric type of CD (UCD) typically presents as an asymptomatic single enlarged lymph node. By contrast, the multicentric type of CD (MCD) is associated with systemic symptoms, including hepatosplenomegaly, recurrent fevers, night sweats, and lymphadenopathy[2]. The association or coexistence of an epithelial malignancy with CD is an exceptional occurrence. An extremely rare case presenting with synchronous cervical CD and esophageal carcinoma that clinically simulated nodal metastatic disease is reported, and the relevant literature is reviewed.

An esophageal tumor was identified in a 67-year-old man during a follow-up examination after surgery for oral carcinoma. He had comorbid disorders of hypertension, angina pectoris, diabetes mellitus, and hyperlipidemia. Enlarged lymph nodes in the right neck were palpable. Routine laboratory findings were unremarkable, with the exception of a slightly elevated serum squamous cell carcinoma (SCC)-related antigen (2.4 ng/mL, normal 0-1.5 ng/mL). Esophagoscopy revealed a type 1 tumor in the cervical esophagus (Figure 1). Histological examination of esophagoscopic biopsies revealed squamous cell carcinoma. An upper gastrointestinal barium study indicated a filling defect 15 mm in size at the cervical esophagus (Figure 2). Contrast-enhanced computed tomography (CT) revealed weakly enhanced swollen lymph nodes of the right cervical region (Figure 3). No distant metastasis was demonstrated. Esophageal carcinoma T2N2M0, Stage IIIA was diagnosed clinically. Neoadjuvant chemotherapy was recommended, but the patient rejected the chemotherapy. The patient underwent laparoscopic-assisted transhiatal esophagectomy with reconstruction using a posterior mediastinal gastric tube. The operative time was 265 minutes, and the amount of blood loss was 140 mL. Macroscopically, the type 1 tumor was located in the cervical esophagus, and it measured 30 mm × 15 mm (Figure 4). The histopathological diagnosis of the esophageal tumor was moderately differentiated squamous cell carcinoma (Figure 5A). In addition to the main tumor, numerous microscopic foci of squamous intraepithelial neoplasia from low grade to high grade were noted throughout the resected esophagus. No tumor metastases were present in the lymph nodes. However, three swollen lymph nodes were identified in the right cervical region at #104. Histological examination of these lymph nodes revealed characteristic findings, such as tight concentric layering of lymphocytes at the periphery of the lymph follicles resulting in an onionskin appearance and inter-follicular diffuse proliferation of plasma cells. The findings were compatible with CD, plasma cell type (Figure 5B and C). The final diagnosis was esophageal squamous cell carcinoma without lymph node metastasis, pT1bN0M0, Stage IA and CD of the cervical lymph nodes. The patient had an uneventful postoperative course. 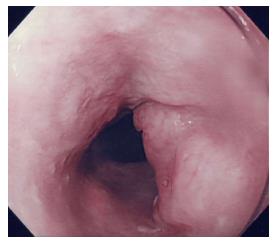 Figure 1 Esophagoscopic view of the tumor. Esophagoscopy reveals a type 1 tumor in the cervical esophagus. 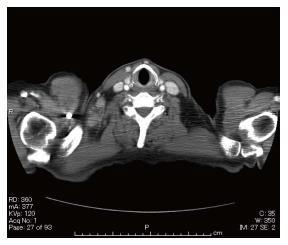 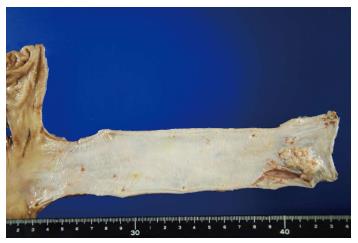 Figure 4 Surgical specimen of the esophagus. Macroscopically, the type 1 tumor is located in the cervical esophagus, and it measures 30 mm × 15 mm.

Figure 5 Histopathological results of the resected specimen. A: The histopathological diagnosis of the resected esophagus is moderately differentiated squamous cell carcinoma (HE × 200); B: Histological examination of the right-sided neck lymph nodes reveals onionskin arrangement of small lymphocytes (HE × 20); C: Interfollicular diffuse proliferation of plasma cells (HE × 200).
DISCUSSION

CD is an uncommon benign lymphoproliferative disorder of unknown etiology that was first reported by Castleman et al[1] in 1956. A variant of the multicentric form was later found to be associated with human herpesvirus 8 (HHV-8), which is the same virus found in Kaposi’s sarcoma. Similar to Kaposi’s sarcoma, it is often identified in patients with human immunodeficiency virus (HIV)[3]. From a systematic case review including 278 patients with unicentric CD (UCD), the main sites of disease are the chest (29%), neck (23%), abdomen (21%), and retroperitoneum (17%). In addition, other lymph node groups (axillary, inguinal) and the pelvis are also potential sites of involvement[4]. With advancements in the understanding of the disease entity, CD is classified into four subtypes: (1) hyaline-vascular CD; (2) plasma cell CD; (3) HHV-8-associated (plasmablastic) multicentric CD (MCD); and (4) MCD, not otherwise specified (NOS). The hyaline-vascular subtype is characterized by widened mantle zones composed of concentric rings of small lymphocytes in an “onion skin” pattern around small atrophic germinal centers with penetrating hyalinized vessels and dysplastic follicular dendritic cells[3]. The subtype typically occurs as a unicentric process, involving a single node or local group of nodes. The plasma cell variety, which is characterized by sheets of mature plasma cells in the interfollicular tissue, occurs more often as a multicentric process[5]. Patients with HHV-8-associated (plasmablastic) MCD incur a unique risk of developing HHV-8-positive plasmablastic lymphoma[6]. The multicentric NOS variant is a wastebasket term used to classify multicentric cases that are HHV-8 negative and/or those that exhibit intermediate histopathology (such as mixed features of both plasma cell and hyaline-vascular)[7].

The radiographic characteristics of CD are non-specific, but some features could help raise suspicion for the diagnosis of CD. Plain radiographic findings include a mass effect. In addition, in approximately 30% of cases exhibit localized calcifications harboring a radial arrangement or star-shaped calcification, which is considered characteristic of CD. Ultrasonography (US) typically demonstrates a hypoechogenic and homogeneous mass with a quite clear delimitation. CT scans reveal a solid, homogeneous, and well delimited mass that is enhanced with vascular contrast as a result of hypervascularity[2].

A review of current therapeutic strategies for CD revealed that complete surgical resection is curative for UCD, leading to excellent long-term outcomes with 10-year overall survival rates in excess of 95%. Although the available literature is confined to a small number of cases, radiotherapy appears to be a reasonable alternative treatment option in unresectable cases of UCD. A range of systemic therapies has been used in MCD, including cytotoxic chemotherapy, antibodies directed against CD20 (rituximab) and interleukin-6 (IL-6) (siltuximab) and its receptor (tocilizumab), immunomodulators (interferon alpha, thalidomide, and lenalidomide), bortezomib, and antiviral agents (zidovudine and valganciclovir, ganciclovir, and cidofovir). Although these agents inhibit disease activity, the literature documenting their use is mainly confirmed to case reports or small series of patients, limiting overall assessment of efficacy and direct comparisons between regimens[8].

In the present case, the preoperative clinical diagnosis was esophageal carcinoma T2N2M0, Stage IIIA, but the stage was revised to pT1bN0M0, Stage IA upon pathological diagnosis. The preoperative diagnosis of CD is very difficult given the lack of disease-specific signs. This case demonstrated that cervical CD could be rarely associated with an esophageal carcinoma when it clinically mimics nodal metastasis.

An esophageal tumor was identified in a 67-year-old man during a follow-up examination after surgery for oral carcinoma.

Enlarged lymph nodes in the right neck were palpable.

Castleman’s disease is an uncommon benign lymphoproliferative disorder of unknown etiology. The main sites of disease were the chest, neck, abdomen, and retroperitoneum.

This case demonstrates that cervical Castleman’s disease can be rarely associated with an esophageal carcinoma when it clinically mimics nodal metastasis.

This is an interesting case report demonstrating that swollen lymph nodes during preoperative tumor staging can be due to other uncommon benign diagnoses.