To investigate the outcomes of liver and pancreatic resections for renal cell carcinoma (RCC) metastatic disease.

This is a retrospective, single centre review of liver and/or pancreatic resections for RCC metastases between January 2003 and December 2015. Descriptive statistical analysis and survival analysis using the Kaplan-Meier estimation were performed.

Our study shows that despite the high incidence of recurrence, long term survival can be achieved with resection of hepatic and pancreatic RCC metastases in selected cases and should be considered as a management option in patients with oligometastatic disease.

Renal cell carcinoma (RCC) is one of the commonest causes of cancer related mortality, with 5-year survival ranging between 10%-90% depending on the stage of the disease[1]. Metastatic disease is present at the time of diagnosis in almost a third of patients, while 20%-50% of patients with localised disease will develop metastases after nephrectomy[1,2]. The most common site of metastatic disease is lung, followed by lymph nodes, bones and liver[3-6]. Hepatic metastasis has been reported in 41% of patients on autopsy[7], while pancreatic metastases are rarer, representing less than 5% of RCC metastases[1,8,9].

Current management strategies of metastatic RCC include surgical resection, chemotherapy [including newer agents such as tyrosine kinase inhibitors (TKI)], radiotherapy and hormonal therapy. However, the results are still poor with a median 5-year survival 5%-20%[3,4,10-14]. The role of surgery is still not clear as published data are limited. Nonetheless, a survival benefit has been reported in selected cases rendering surgical resection a management option in cases of oligometastatic disease.

We present our centre’s experience in the surgical management of hepato-pancreatic RCC metastases.

This is a retrospective review of all the patients who had liver and/or pancreatic resection for RCC metastasis in our institution, a tertiary regional referral centre for the surgical management of hepatic and pancreatic malignancies, between January 2003 and December 2015. Data from the pre- and post-operative period were collected from the hospital’s electronic records and histopathological database. Follow-up data were obtained based on the most recent oncology clinic or electronic medical entry. It is our institution’s policy for all patients to provided informed consent for research at the time of the operation.

All patients with suspected RCC metastatic disease to the liver or pancreas were managed by the hepatopancreatobiliary multidisciplinary team. Preoperative staging was based on imaging with contrast enhanced computer tomography (ceCT) of the chest, abdomen and pelvis. During the later part of the study (after 2011), positron emission tomography CT was used in the staging of all patients and magnetic resonance imaging of the liver in all cases with suspected liver metastasis. Tissue diagnosis was obtained in all cases of suspected pancreatic metastasis by endoscopic ultrasound-guided fine needle aspiration (EUS-FNA). The diagnosis of liver metastatic disease was predominantly based on three dimensional imaging, with half of the cases (n = 3) also undergoing CT- or ultrasound-guided guided core biopsy.

All patients received standard peri-operative care and data regarding the post-operative complications were recorded. Pancreatic fistula was defined and graded using the recommendation of the International Study Group on pancreatic fistula, as drain output of any measurable volume of fluid on or after postoperative day 3 with amylase content greater than 3 times the serum amylase activity[15].

Thirteen patients were treated by our team for metastatic RCC to the liver or pancreas over the 13-year period. The majority of the primary tumours (n = 12) were of the clear cell histological type, while 1 was adenocarcinoma. Median follow-up was 33 mo (range: 3-98). Cohort descriptive characteristics, as well as the individual case characteristics can be found on Tables 1 and 2 respectively. Fourteen resections for metastatic disease were performed, 7 pancreatic and 7 liver resections. One patient had a laparoscopic distal pancreatectomy and splenectomy followed by a laparoscopic non-anatomical liver resection. In 2 cases the patients were found to have low volume pulmonary metastases during pre-operative staging. In both cases the multidisciplinary team decision was to proceed with the major abdominal operation first and consider subsequent management of the pulmonary metastases after the patients were fully recovered. All resections were histologically R0 with the exception of one total pancreatectomy which had a clear histological margin of less than 1 mm (R1). In only one pancreatectomy case nodal metastasis was confirmed histologically. The overall median length of stay was 15 d (range: 4-28); 18 d (range: 8-28) for pancreatic and 9 d (range: 4-27), for liver resections. 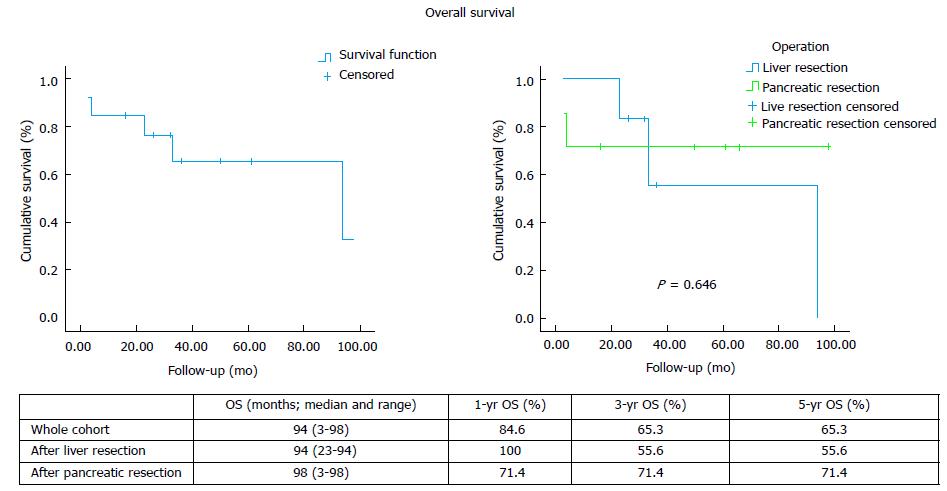 Figure 1 Kaplan Meier overall survival analysis for the whole cohort (left) and stratified according to type of resection (right). Comparison of survival curves performed with the use of Log-Rank test.

Figure 2 Kaplan Meier disease-free survival analysis for the whole cohort (left) and stratified according to type of resection (right). Comparison of survival curves performed with the use of Log-Rank test.
DISCUSSION

The published evidence on the management of RCC metastatic disease is scarce. Long-term survival with targeted treatment, including surgical resection, has been reported. Differences have also been noted in the literature with regards to the management approach and outcomes of RCC metastases to the liver and the pancreas, while results from the use of the novel chemotherapy agents TKIs in liver metastatic disease are non-existent. Data on the role of systemic therapy in combination with operative management in a neoadjuvant and/or adjuvant setting are scarce and limited to case series. Following liver resection, overall survival has been reported between 16 and 142 mo after liver resection and disease-free survival between 7 and 30 mo (Table 3). Our experience demonstrates comparable results, with 94 mo (range: 23-94) median overall survival and 10 mo (range: 3-55) median disease free survival after hepatectomy.

With regards to pancreatic metastases, initial data from published case series (Table 3) and literature reviews[1,16,17] suggested that surgical management offers superior results with median overall survival between 22-120 mo. Survival rates have been reported at 67%-91% at 3 years and 61%-88% at 5 years. On the contrary, non-surgical management resulted in significantly worse 3-year and 5-year survival of 21% and 0%-47% respectively[16-18]. However, more recent data suggest that the use of TKI-based chemotherapy conferred similar overall survival to surgery[6]. Even though the median survival achieved with resection was about 1 year longer compared to TKI-based chemotherapy (86 mo vs 103 mo), it did not reach statistical significance (P = 0.201). Since no complete disease response was observed with chemotherapy, the study concluded that surgery may be a better option in the subgroup of patients with good prognostic criteria and no other concomitant metastases as it can radically treat the disease. In our series, after pancreatic resection the median overall survival was 93 mo (range: 3-98) and 3- and 5-year rates 71.4%, which is comparable to the published data. Likewise, we recorded median disease-free survival at 28 mo (range: 3-53), which is comparable to the published reports of median disease-free survival between 16 and 65 mo after pancreatic resection for RCC metastases (Table 3).

Liver and pancreatic resections carry a significant risk for perioperative morbidity and a small risk for mortality. Morbidity after resection of RCC liver metastases has been reported between 13% and 55% and after pancreatic resection as high as 47% (Table 3). Mortality has been reported between 0% and 5.3% after liver and between 0% and 6.4% after pancreatic resections for RCC metastases. Therefore, a careful patient selection for surgical management should be employed. Patients with disseminated or very aggressively progressing disease are not considered good surgical candidates for liver or pancreas metastasectomies, as this may substantially impact their quality of life without adding any survival benefit. Similarly, patients with significant medical history and/or poor performance status, that would not tolerate a major resection, should be considered for non-surgical management. In our cohort, all patients had Karnofsky performance score 80-100 and were deemed fit for major surgery after clinical and laboratory assessment by the multidisciplinary team. Postoperative complications were recorded in 5 cases (one liver and 4 pancreatic resections), with no postoperative mortality.

In this study, the median time interval between nephrectomy for the primary tumour and the diagnosis of metastatic disease was 57 mo (range: 4-292) (Table 1). Specifically for liver metastasis, with the exception of the 2 cases of synchronous metastatic disease, this period was of 29 mo (range: 4-129), which is comparable to reports in the literature of a median 4-53 mo (Table 3). For pancreatic metastasis this period was 80 mo (range: 10-292), somewhat shorter than most published case series (Table 3) and reviews[1,16,17], reporting a period between 104-169 mo after nephrectomy. A possible explanation could be the implementation of more intensive follow-up protocols for these patients in the recent years after the resection of the primary tumour. Furthermore, due to the rare nature of RCC metastasis to the pancreas all cases were confirmed with EUS-FNA. The need for tissue diagnosis was further supported by the fact that in almost all of our patients (6 out of 7) the pancreatic metastasis was the first and only site of metastatic disease. The use of immunohistochemistry (e.g., cytokeratin, vimentin, CD10, synaptophysin, CK7, CK20 and CA19) in addition to the standard histopathological stains can be useful in facilitating the diagnosis and is strongly advisable[19,20].

The evidence on the management of RCC metastatic disease to the liver and pancreas remains inconclusive. The rare nature of the disease precludes randomised studies and therefore current evidence is drawn from published case series. Regardless of the small size of our cohort, our data show that despite the high incidence of recurrence, long term survival can be achieved with resection of hepatic and pancreatic RCC metastases in selected cases and should be considered as a management option in patients with oligometastatic disease.

Renal cell carcinoma (RCC) is one of the commonest causes of cancer related mortality. Metastatic disease is present at the time of diagnosis in almost a third of patients, while 20%-50% of patients with localised disease will develop metastases after nephrectomy. The role of surgery in the management of metastatic RCC is still not clear as published data are limited.

This is a retrospective single centre experience in the surgical management of patients with metastatic RCC to the liver and pancreas.

The authors’ study shows that despite the high incidence of recurrence, long term survival can be achieved with resection of hepatic and pancreatic RCC metastases in selected cases and should be considered as a management option in patients with oligometastatic disease.

The authors have well described these cases and the review of the literature about this topic has been conducted sufficiently in depth.