We reported 5 cases of granular cell tumors (GCTs) of esophagus and reviewed the literature. There were 4 females and 1 male with a median age of 43 years and an average age of 44 years. All of the cases had solitary tumors. Tumor size was 0.4-2.5 cm in diameter. Gastroscopy revealed that 2 cases were located in the middle esophagus, 1 case in the upper esophagus, and 2 cases in the distal one. Five cases displayed gray-white, pink, yellow mucosal uplifts of esophagus, 3 cases had smooth surface, 1 case was slightly concave, and the biggest tumor had erosion. Tumor cells were large and polygonal with rich granular and eosinophilic cytoplasm, and small oval nuclei. Cells were arranged in nest or aciniform. Immunohistochemistry and histochemistry staining showed S-100+, neuron specific enolase+, Vim+, CD68+, smooth muscle actin-, Des-, CK-, CD117-, CD34-, Ki67-or ≤ 5%+. Periodic acid-Schiff reaction and epithelial membrane antigen were both weakly positive. GCTs of esophagus are rare and most of the cases have good prognosis.

Core tip: Granular cell tumors (GCTs) of esophagus are rare and most of the cases have good prognosis. We reported 5 cases of GCTs of esophagus and reviewed the literature. The report is helpful in comprehensively understanding the characteristics of GCTs and guiding the treatment of this disease.

Some clinicopathological data are shown in Table 1. Case 1 had intermittent heartburn for 3 mo. The patient was diagnosed with superficial gastritis (active phase). She had hepatitis B for > 20 years. Case 2 was accidentally found through physical examination 3 mo ago. Case 3 had dysphagia for approximately 3 mo. Clinicians’ first impression was stromal tumor. Case 4 had slight pain behind the sternum for 6 mo. Clinical diagnosis was chronic gastritis with erosion, gastric polyps, and xanthoma of the esophagus. Case 5 complained of acid reflux for 1 mo, with intermittent abdominal distension and belching. Endoscopic ultrasonography revealed a low-echo lesion in the submucosa of the distal esophagus, with integrity of the muscularis propria. Clinicians’ first impression was GCT. The patient also had diabetes. 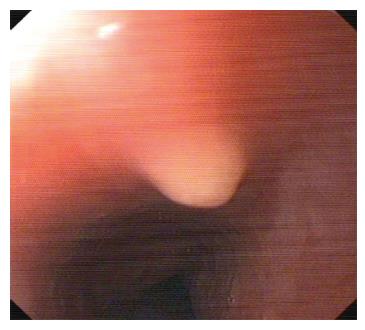 Figure 1 A grayish-yellow uplift was seen in the esophagus 18 cm from the incisor with smooth surface under endoscope in Case 4.

All cases underwent successful endoscopic mucosal resection without complications, using endoscopic electrosurgical snare resection. The lesions were found by gastroscopy and the size, color, topography and peripheral tissue were observed. The motion and position of the lesion were assessed with biopsy forceps. If the lesion was located in the mucosa and submucosa, and ≤ 3 cm in diameter, trap resection could be used. This involved fixing the position of the tumor by gastroscopy, focusing on the base of the tumor with a snare trap, tightening the snare, cutting the tumor with an electrotome, and stemming the bleeding. Finally the specimen was sent for pathological examination.

Under light microscopy, the tumor was located under the mucosal squamous epithelial basement membrane. The tumor cells were large and polygonal. The cytoplasm was granular and eosinophilic. The nuclei were small, ovoid or slightly irregular with fine chromatin, and some were deviated. Small nucleoli were visible in some cells (Figure 2). Small crack-like blood vessels were observed. In Case 3, a few lymphocytes infiltrated the stroma, and lymph follicles were formed around the tumor. In Case 4, the tumor was located between the mucosal squamous epithelial basement membrane and the submucosa. The polygonal cells were arranged in an aciniform manner. Immunohistochemical and histochemical staining are shown in Table 2 and Figure 3. 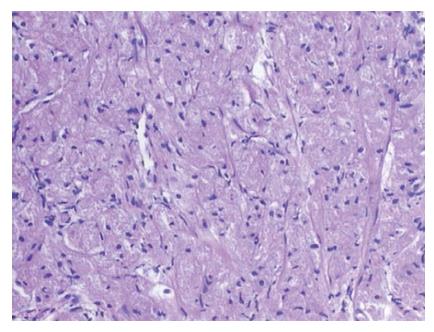 Figure 2 The tumor cells were large and polygonal with granular and eosinophilic cytoplasm, and small oval nuclei. Hematoxylin and eosin staining, × 100.

The above five cases were all diagnosed with esophageal GCT. Four patients had no recurrence during follow-up of 7-33 mo. One patient was lost to follow-up.

The tumors were mostly located in the mucosa and submucosa, and only a few invaded into the muscular layer. The tumor cells were large and appeared polygonal. The cytoplasm was granular and eosinophilic. The cell nuclei were ovoid with fine chromatin and no mitotic figures. The cells were arranged in nest or acinar form[1-6].

GCTs are commonly identified as nonspecific painless masses. Patients with small tumors are often asymptomatic[1,2], and the emergence of clinical symptoms is related to tumor size. When the tumor diameter is > 1 cm, patients may experience dysphagia[1]. Esophageal lesions are often found by chance through gastroscopic examination[1,2,3,6]. Patient complaints are mostly abdominal distension, acid reflux, belching, and loss of appetite[3]. In our study, the patients complained of intermittent heartburn, dysphagia, acid reflux with intermittent abdominal distension and belching, and slight pain behind the sternum. GCT in Case 2 was accidentally found through physical examination.

The color of the tumor surface is usually white-gray, pink or yellow. The tumors show polypoid or nodular uplift without pedicles, and most have a smooth surface[2,6,8]. In the five cases described in this report, the tumors were gray-white, pink or yellow, with mucosal uplifts of the esophagus under gastroscopy. Three cases had a smooth mucous surface, one had slight concavity, and the largest tumor had erosion.

By EUS, GCTs are often located in the mucosal layer or submucosa, as round or circle-like masses, hypoechoic and homogeneous lesions, with clear borders. A few GCTs invade the muscular layer. In EUS images, average grayscale values of GCTs are greater than those of esophageal leiomyoma, which can help with differential diagnosis and improve the accuracy of EUS for the diagnosis of esophageal GCTs[2-4,9]. In the present Case 5, EUS showed a low-echo lesion in the submucosa, with no violation of the muscularis propria layer, which was similar to previously described cases. Palazzo et al[10] found that GCTs had three characteristics: (1) tumor size < 2 cm in 95% of cases; (2) a hypoechoic solid pattern in all cases; and (3) a tumor arising in the inner layers in 95% of cases[10].

Immunohistochemical and histochemical staining was positive for S-100, CD68, neuron speoific enolase (NSE) and vimentin. Periodic acid-Schiff (PAS) and epithelial membrane antigen staining was weakly positive. Staining was negative for cytokeratin, desmin, smooth muscle actin (SMA) and CD34 (although surrounding mesenchymal cells were positive for CD34). This was most in accordance with the literature[2,3,6,11].

Differential diagnosis includes the following tumors: (1) Gastrointestinal stromal tumors (GISTs). GISTs are usually located in the submucosa, and are rare in the esophagus. The tumor cells are spindle-shaped or round and arranged in fasciculus, weave or whirlpool shape. Immunohistochemical staining is positive for CD117 and CD34[12]; (2) Leiomyoma. Leiomyoma is composed of moderate spindle cells with eosinophilic cytoplasm. The spindle cells are arranged in beam and/or weave pattern. The nuclei are rod-shaped or cigar-shaped. Immunohistochemical staining is positive for SMA and desmin, and negative for CD34 and CD117. Average grayscale values of esophageal leiomyoma are lower than those of GCTs; (3) Schwannoma and neurofibroma. Schwannoma has a complete capsule. The tumor cells are spindle-shaped or stellate. Typical schwannoma has two kinds of histological structure under microscope: pyknotic Antoni type A and loose Antoni type B. Neurofibroma is composed of thin and long spindle cells with wavy shape and pale cytoplasm. Negative staining for CD68 helps with differential diagnosis; and (4) Xanthoma. Cells are round or polygonal with pale cytoplasm. The nuclei are round, small and moderate, and usually located in the center of the cells. Cells are located in the mucosal lamina propria. Xanthoma usually occurs in the stomach. Cells have a lack of granular cytoplasm, and stain positive for CD68 and negative for PAS.

Benign and malignant GCTs have similar histopathology, and there are no clear histological diagnostic criteria for benign and malignant tumors. The following are suggestive of malignant GCT: rapid tumor growth, > 5 cm in diameter and karyokinesis in > 2/10 high-power fields; tumor cells are spindle shaped, with vesicular nuclei and nucleoli; high ratio of nucleus to cytoplasm with cellular pleomorphism; and tumor tissue necrosis[13]. One study found that > 50% p53-positive cells and > 10% Ki-67 positive cells were significantly correlated with malignancy[13].

In recent years, most investigators have thought that GCT is related to peripheral nerve tissue. Some studies have found that tumor cells are surrounded by nerve bundles, and there is a transition phenomenon from Schwann cells to tumor cells. Immunohistochemistry and ultrastructural analysis show the differentiation of Schwann cells. All the present cases were strongly positive for S-100 and NSE, which suggested the neurogenic origin of GCTs.

In Case 5, endoscopic ultrasonography revealed a low-echo lesion in the submucosa of the distal esophagus, with integrity of the muscularis propria.

Five cases were all diagnosed with esophageal GCTs.

GCTs of the esophagus are rare benign tumors.

The prognosis of esophageal GCTs is good, and recurrence and metastasis are rare.

This is an interesting article on the rare tumor of esophagus. The experiments are well designed and described in detail.