Liposarcoma is one of the most common soft tissue sarcomas that occurs in adults and is currently divided into five main subgroups: well-differentiated, myxoid, round cell, pleomorphic and dedifferentiated[1]. Liposarcoma usually occurs in deep soft tissues of extremities and retroperitoneum; a presentation primarily involving the gastrointestinal (GI) tract is unusual and secondary involvement of the GI tract in cases of retroperitoneal liposarcoma is also extremely uncommon. We report a case of a primary locally advanced liposarcoma of the small bowel mesentery presenting as a submucosal polyp.

A 76-year-old woman presented with a 3-mo history of palpable abdominal mass and urinary frequency. Furthermore, she had a surgical history of myomectomy and her past medical history included hypertension and insomnia. A physical examination revealed a palpable mass in the right lower quadrant of the abdomen. Laboratory tests on admission were within normal values, including tumor markers (carcinoembryonic antigen, cancer antigen 125, carbohydrate antigen 19-9 and α-fetoprotein). A computed tomography scan showed a 13.2 cm × 6.5 cm fatty mass with a solid portion measuring 5.5 cm × 4.1 cm (Figure 1). The patient underwent a segmental resection of the small bowel. Gross examination revealed a submucosal polyp without a mucosal ulcer. On a cross section, the mass was composed of two portions; one portion was a whitish, elastic-hard nodule measuring 5 cm × 4.3 cm × 4.2 cm and was located in the small bowel wall, whereas the other portion was yellow, soft and located in the small bowel mesentery (Figure 2). Histological examination showed the lesion to be composed of well-differentiated liposarcoma (WDLPS) with abrupt transition to areas with dedifferentiated components. Well-differentiated areas were presented by adipose tissue in which variation in adipocyte size and a scattering of mono- and multi-vacuolated lipoblasts with irregularly shaped, scalloped and hyperchromatic nuclei were identified (Figure 3A). The dedifferentiated areas showed pleomorphic spindle cells arranged in a fascicular pattern (Figure 3B) invading the small bowel wall (Figure 3C). There was one mitosis per 10 HPF with no necrosis. Immunohistochemistry showed that a well-differentiated component was positive for S-100 protein whereas a dedifferentiated component did not express SMA, desmin, myoglobulin, CD34 and CD117(c-kit), thereby ruling out GI stromal tumor (GIST). 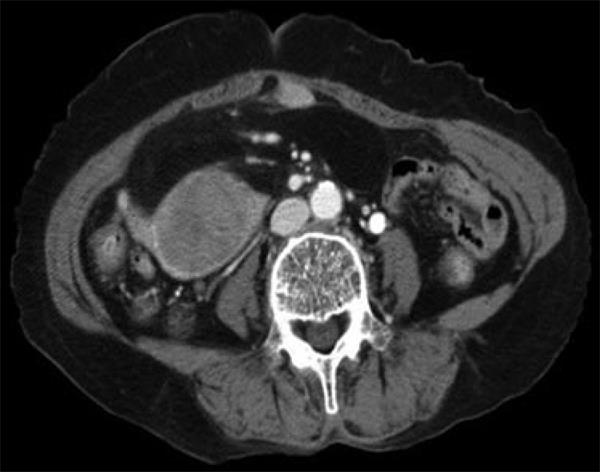 Figure 1 A computed tomography scan demonstrating a fatty mass with a solid portion. 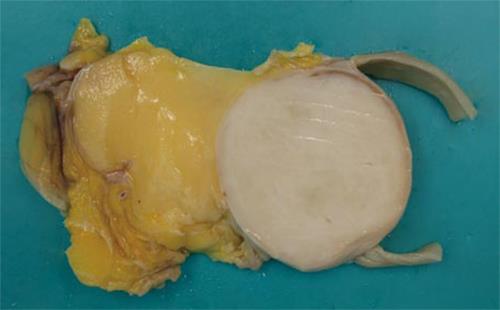 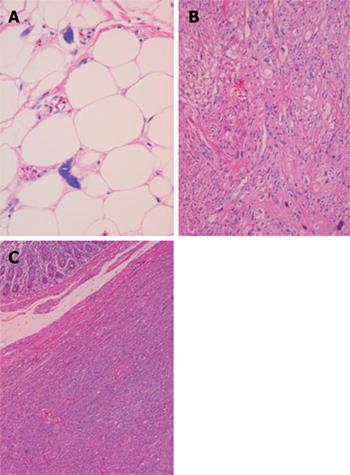 Dedifferentiated liposarcoma (DDLPS) is a term that was first introduced by Evans in 1979 to describe liposarcomas containing a mixture of atypical lipoma (ALT)/WDLPS and a high-grade nonlipogenic sarcomatous component, usually with an abrupt transition between the two components[2]. Dedifferentiated areas exhibit a wide morphological spectrum and often show a high-grade sarcoma resembling a malignant fibrous histiocytoma (MFH) or low-grade spindle cell sarcoma[3,4]. DDLPS has a less aggressive clinical course than other types of high-grade sarcoma, although the underlying mechanism is unclear. Approximately 40% of DDLPSs will recur locally, 17% will metastasize and 28% of patients will ultimately die as a result of the tumor[1].

DDLPS usually occurs in the extremities and retroperitoneum. The GI tract is not the typical location for primary liposarcoma and liposarcomas primarily involving GI tract are extremely uncommon. Documented cases of primary liposarcoma have been reported in different parts of the GI tract, such as stomach, small intestine and colon[5]. Secondary involvement of the GI tract in cases of retroperitoneal liposarcoma is also extremely uncommon. Five cases of DDLPS have been described from the small bowel mesentery[4]. The occurrence of these tumors in the small intestine often present as a submucosal polyp[6] or even intussusceptions[7]. In our case, a well-differentiated component was located in the small bowel mesentery and a dedifferentiated component transmurally invaded the bowel wall and presented as a submucosal polyp. Most of the DDLPSs consist of well-differentiated areas of liposarcoma admixed with areas of morphologically high-grade nonlipogenic sarcoma. However, in our case, the interface between the two components was sharply demarcated grossly. Because dedifferentiation occurring in ALT/WDLPS is considered as time dependent and WDLPS is absent in the small bowel mass, the tumor appeared to originate from the small bowel mesentery as secondary involvement of the small bowel wall.

For our case, taking the radiological information and the location of the lesion into account, the possibility of GIST and sarcoma infiltrating fat was considered. GISTs typically stain with CD117 and do not consist of a WDLPS component. DDLPSs need to be distinguished from other high-grade sarcomas such as MFH because these high-grade sarcomas have a much worse prognosis. The distinction between sarcoma infiltrating fat and DDLPS is the existence of ALT/WDLPS. Immunohistochemically, DDLPS is usually negative for CD117 and CD34 in the dedifferentiated component and positive for S-100 protein in the well-differentiated component[8].

The distinction of DDLPS from other high-grade sarcomas can be problematic on needle biopsy as the samples are small and the component of DDLPS can be identical to other high-grade sarcoma. Consequently, liposarcomas should be considered in the differential diagnosis when a submucosal mass is associated with a radiographical mass lesion, especially when the mass is retroperitoneal.