Twist is a repressor of E-cadherin transcription that induces epithelial-mesenchymal transition and cancer metastasis. However, the prognostic value of Twist expression in patients with esophageal cancer remains controversial.

To investigate the prognostic and clinicopathological value of Twist expression in esophageal cancer.

Published literature in databases such as EMBASE, Web of Science, PubMed, China National Knowledge Infrastructure, Wanfang, and VIP databases was searched for eligible articles. Participants with esophageal cancer whose tumor tissues underwent immunohistochemistry to detect the expression of Twist were considered. Our meta-analysis was conducted using Stata version 12.0. The hazard ratio (HR) and relative ratio (RR) with their 95%CI were pooled. Heterogeneity was estimated by I2 statistics.

According to the latest global cancer burden report, there were an estimated 572000 new esophageal cancer cases and 509000 deaths in 2020, ranking seventh and fifth in morbidity and mortality, respectively[1]. Among esophageal cancers, 90% of the histological types are esophageal squamous cell carcinoma (ESCC)[1-3]. Although a slew of breakthroughs in terms of the diagnosis and treatment of esophageal cancer has been achieved[4], the 5-year survival rate of ESCC is only 15%–20%[5] due to invasion and distant metastasis. Therefore, there is an urgent need for the identification of new prognostic biomarkers to address the poor prognosis of esophageal cancer.

Epithelial-mesenchymal transition (EMT) describes a key developmental program in which epithelial cells change to motile mesenchymal cells[6]. Tumor cells can undergo EMT to promote local invasion[7], which is the first step of tumor metastasis[8]. Twist is reported to be a helix-loop-helix transcription factor that can directly bind to the promoter of E-cadherin, a tumor suppressor gene associated with EMT, and downregulate E-cadherin expression[9,10]. Thus, Twist can induce EMT and tumor metastasis. The prognostic value of Twist in esophageal cancer has been investigated in many studies[11-21] with controversial results. Some studies[12,13,15,17] have shown that Twist overexpression is closely related to the poor prognosis of esophageal cancer, while others show that it is unrelated[11,14,16,18-21]. Therefore, we performed a meta-analysis to combine relevant studies and clarify whether Twist could be a promising biomarker for predicting prognosis in esophageal cancer.

The inclusion criteria in the present meta-analysis were as follows: (1) Twist expression was analyzed in human esophageal cancer tissues; (2) The hazard ratio (HR) with 95%CI was reported or available to be calculated indirectly; (3) Correlations between Twist expression and clinicopathologic characteristics were investigated; and (4) The reports were published in English or Chinese. The exclusion criteria were as follows: (1) Duplicate studies; (2) Reviews, animal experiments, case reports, and conference abstracts; and (3) The HR or 95%CI were unavailable. 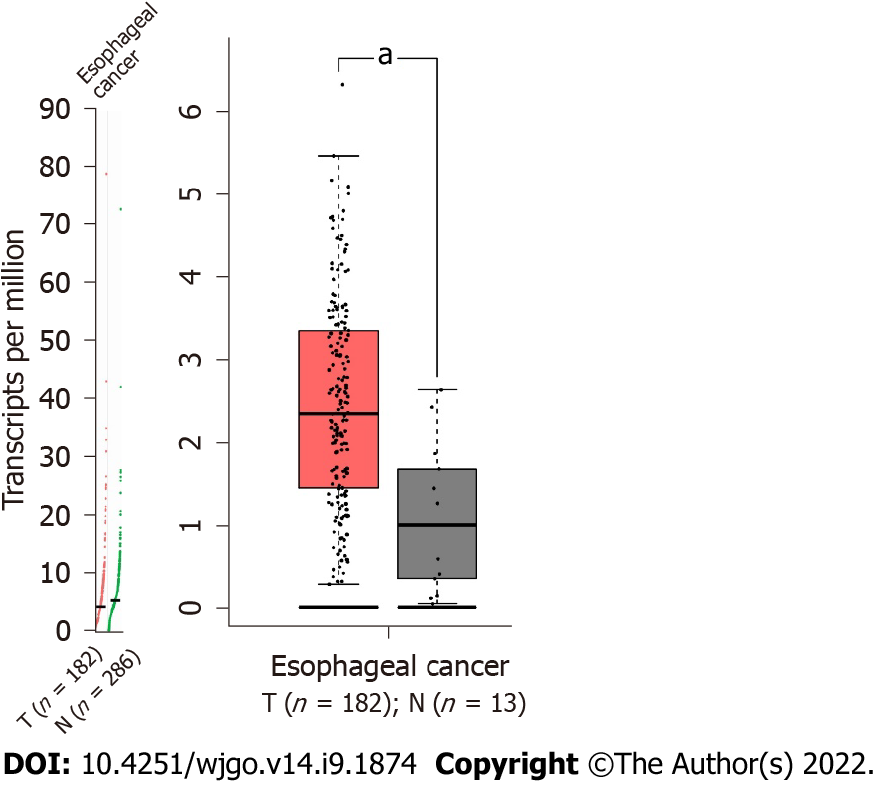 Figure 2 shows the flow diagram for the literature search and selection. We finally identified 11 eligible studies in this meta-analysis[11-21]. 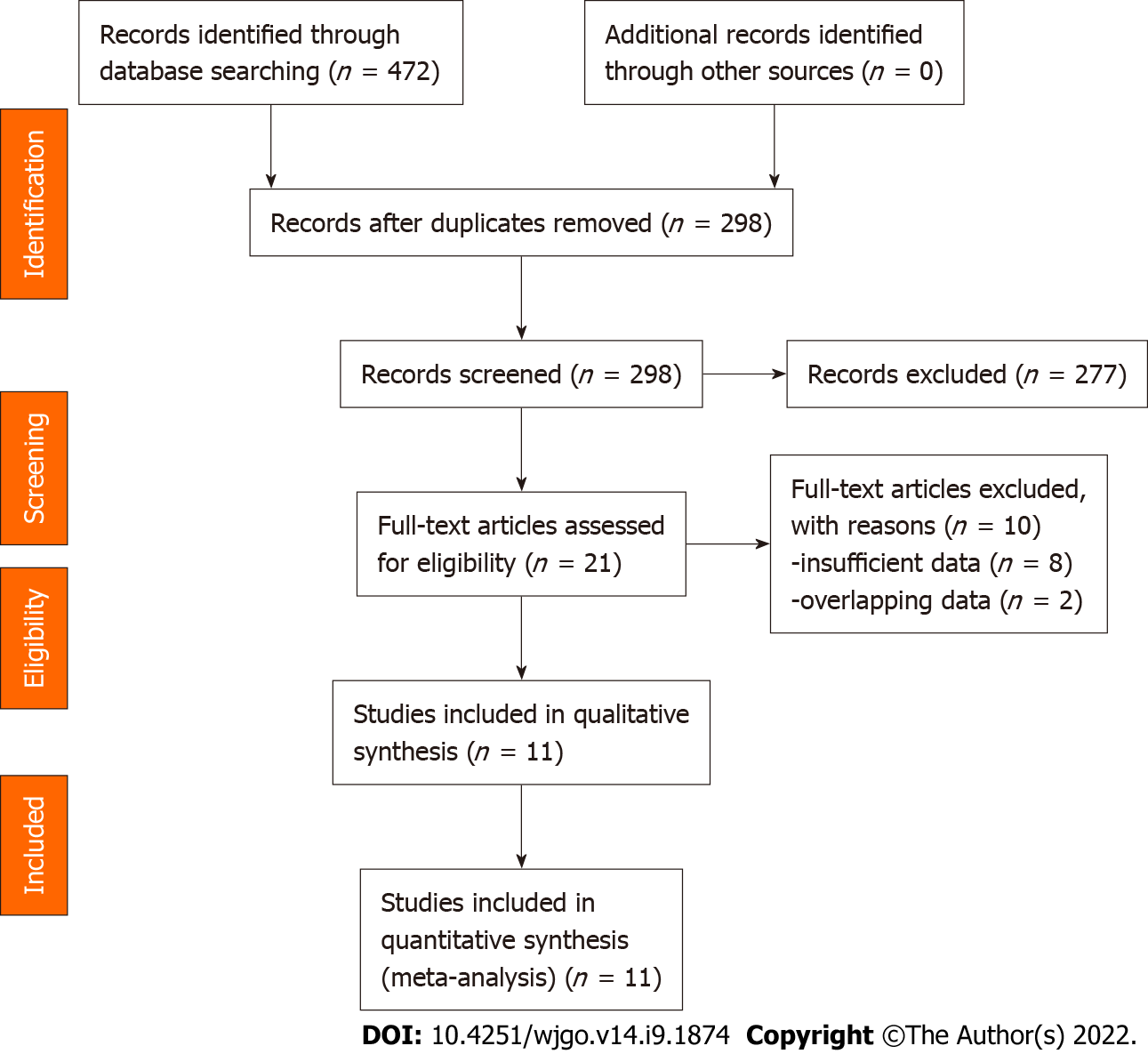 The baseline characteristics of the included studies are shown in Table 1. Among all eligible studies, six studies were published in English[11-14,17,18], while five were published in Chinese[15,16,19-21]. All included studies examined the expression of Twist in esophageal cancer tissue with immunohistochemistry (IHC). Two metrics for IHC staining were used in some studies[11,12,18-21]: The percentage of positively stained cells and the staining intensity. However, some studies[13-17] evaluated Twist expression using only one metric for IHC staining, which resulted in assessing the expression of Twist at various cutoff values. In addition, HRs were directly reported in some studies[11-14,17,20], while others[15,16,18,19,21] were indirectly calculated from survival curves.

The sensitivity analyses for the association between Twist expression and esophageal cancer prognosis suggested that the results of this meta-analysis were stable and reliable (Figure 5). 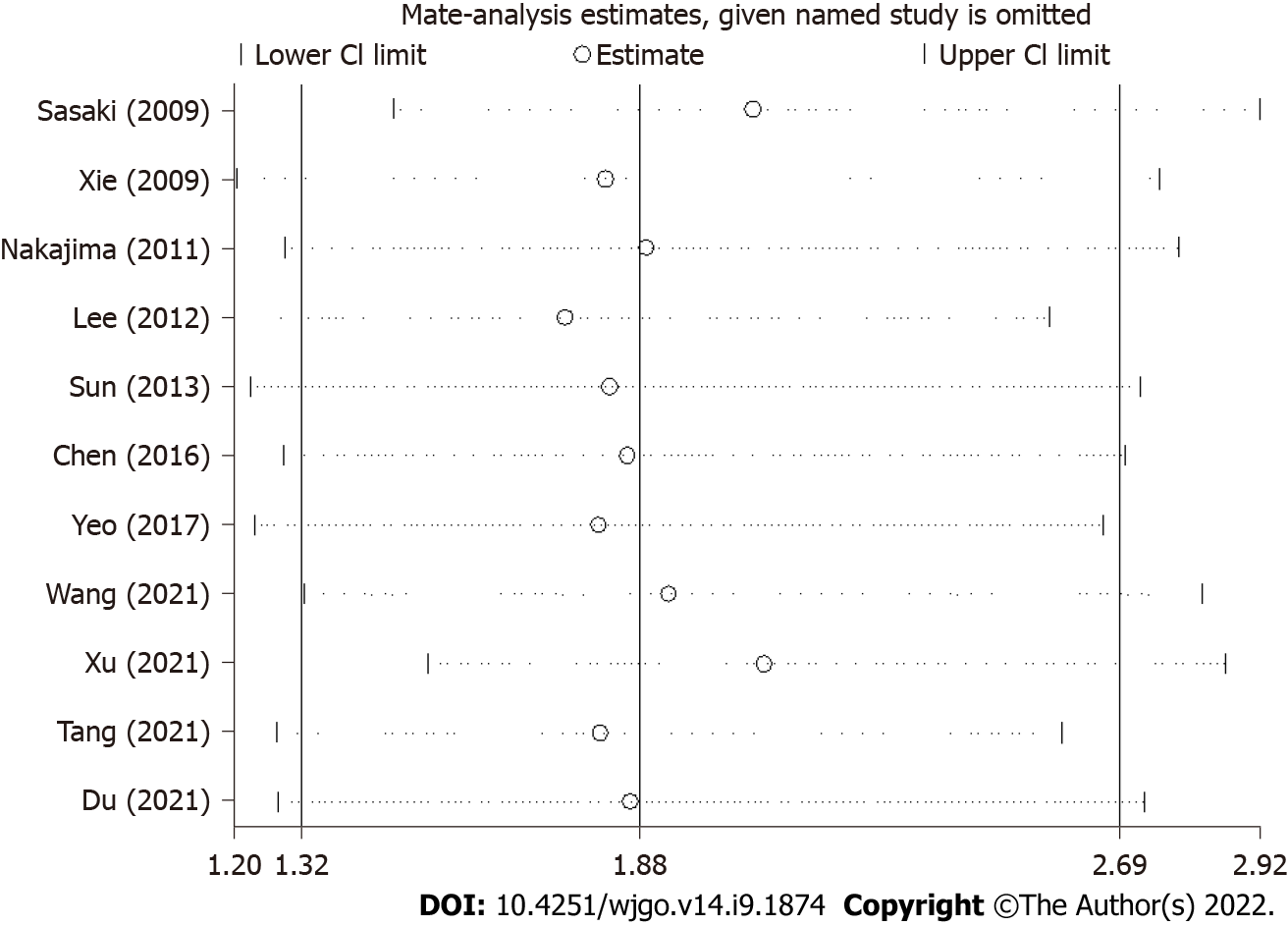 Publication bias was assessed, and the results showed symmetrical Begg’s funnel plots for OS with a P value of 0.78 (Figure 6), suggesting that no obvious publication bias existed. 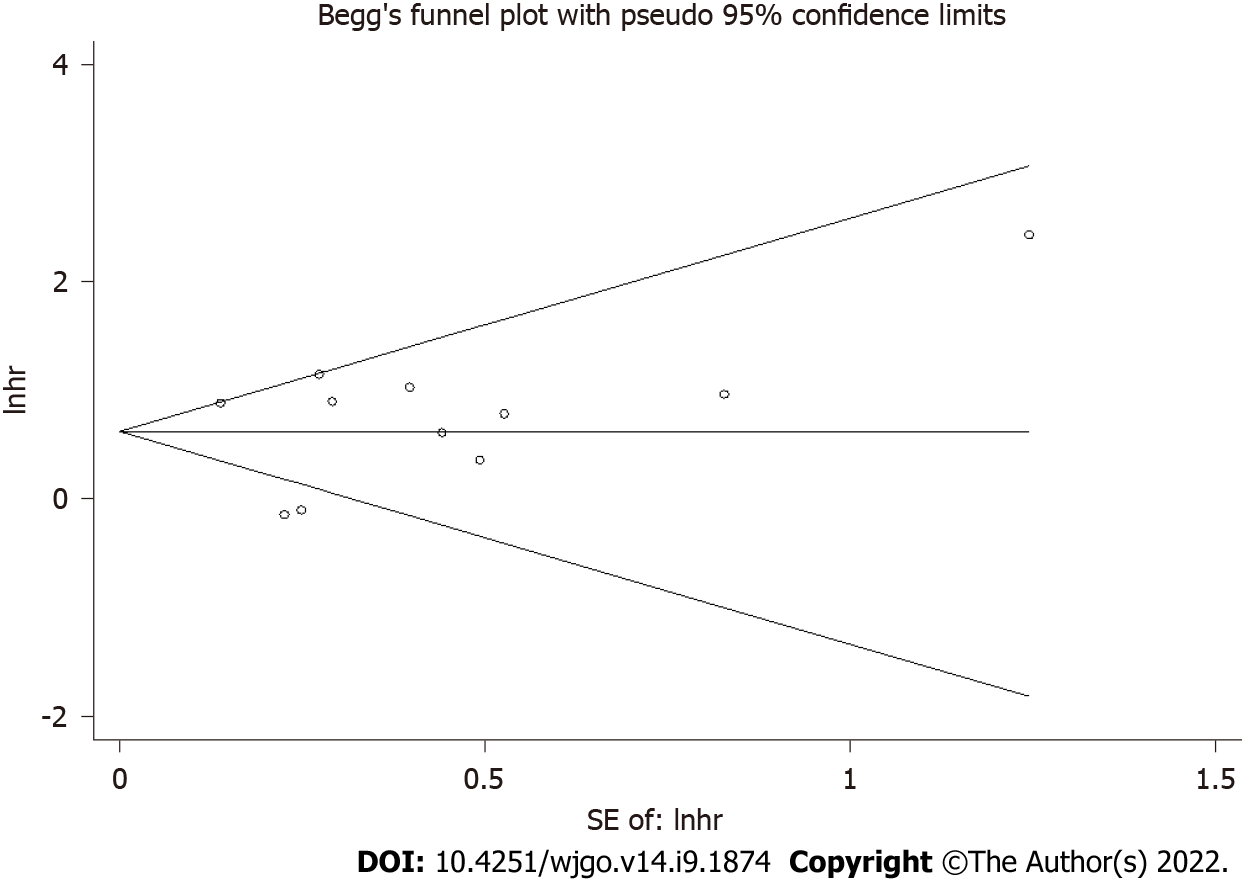 This meta-analysis suggests that high expression of Twist is associated with poor prognosis in esophageal cancer. The subgroup analyses by the detection method of Twist expression imply that major heterogeneity is derived from evaluating Twist expression by different metrics for IHC staining. Several clinicopathological parameters, such as T stage, lymph node metastasis, distant metastasis, TNM stage, and clinical stage, were positively correlated with Twist expression. Some meta-analyses have investigated the relationship between Twist expression and prognosis in other cancers. For example, Zeng et al[28] investigated the prognostic value of Twist in lung cancer and found that high expression of Twist indicated a worse prognosis. Similarly, several meta-analyses revealed that Twist overexpression indicated poor prognosis in breast cancer[29], head and neck carcinoma[30], colorectal cancer[31], hepatocellular carcinoma, urinary cancer, and female reproductive cancer[32]. Our meta-analysis presents similar results and suggests that Twist might be a valuable prognostic biomarker in esophageal cancer.

The human Twist gene constitutes one intron and two exons localized on 7q21.2[33]. Twist is widely expressed in various cancers, such as lung cancer[34], breast cancer[35,36], esophageal cancer[37], and prostate cancer[38,39]. Twist not only plays an important role in mesodermal development but can also participate in the EMT of some epithelium-derived tumor cells. Twist could interact with the Mi2/NuRD chromatin remodeling and gene repression complex (MTA2, RbAp46, Mi2, and HDAC2)[40]. Twist recruits MTA2 to the E-cadherin promoter and reduces the level of acetylation in the promoter region, thereby inhibiting the expression of E-cadherin and promoting the invasive progression of ESCC[41]. Moreover, integrin-mediated adhesion to interstitial matrix proteins may differentially regulate nuclear/cytoplasmic translocation and DNA binding of Twist1, thereby activating the transcription of N-cadherin[38]. In malignant melanoma, increased N-cadherin expression following the loss of E-cadherin mRNA expression has been shown to play an important role in the regulation of cell migration, invasion, and survival[42].

Although all eligible studies used IHC to detect Twist expression, the type of primary antibody used, the degree of antibody dilution, and the quantification of the method were not the same. Second, immunohistochemical scores were classified into three categories in the included studies: scored by intensity, scored by the percentage of stained cells, and multiplied by the percentage score and intensity score, which may be the main sources of heterogeneity. The subgroup analysis found that immunoreactivity scored by multiplying the percentage score and intensity score showed very high heterogeneity (I2 = 79.5%), indicating that different scoring methods for IHC could contribute to potential publication bias. In addition, the scoring criteria and cutoff points for immunohistochemistry were subjective and not uniform in the included studies.

According to Sun et al[15], the positive expression of the Twist gene in ESCC stromal fibroblasts was associated with poor overall survival. Similarly, Yeo et al[17] found high Twist protein expression in cancer-associated fibroblasts of ESCC and concluded that Twist was an independent predictor of poor prognosis for OS. Therefore, more research is needed to explore the clinical significance of Twist expression in stromal fibroblasts. Nakajima et al[14] studied the expression of Twist in 54 patients who consecutively received 5-fluorouracil neoadjuvant chemotherapy followed by surgery. The results also showed that high Twist expression was positively associated with a worse esophageal cancer prognosis. In addition, Tang et al[20] detected tumor samples of 55 ESCC and 31 EAC obtained by endoscopy instead of surgery, while other included studies all detected Twist expression in tissues obtained from patients who underwent surgical treatment. Therefore, the conclusions of the studies discussed above are consistent with the results of our meta-analysis.

This study might have several limitations. First, only 11 studies including 1293 patients were included. Second, all of the patients were from Asian countries, and most were from China, which limited the application of our findings in other countries and regions. Third, the use of different anti-Twist antibodies in the included studies might cause heterogeneity in our meta-analysis. Hence, more evidence is urgently needed to assess the correlation between the expression of Twist and prognostic value in esophageal cancer patients.

Many aspects of Twist deserve further research. Except for the study of Tang et al[20], our meta-analysis only included ESCC patients who underwent surgery. We found few studies investigating the clinicopathological and prognostic significance of the Twist gene in other histological types of esophageal cancer. Furthermore, Lee et al[13] demonstrated that TWIST-positive circulating tumor cells (CTCs) were common in ESCC patients (75% of the total study population), and a proportion of TWIST (+) CTCs ≥ 0.5 was significantly associated with advanced histologic grade[43]. IHC staining is mostly used in studies on the clinical significance of TWIST in esophageal cancer, but this is not conducive to the application of Twist in the diagnosis and treatment of esophageal cancer. As a novel noninvasive biomarker for the diagnosis and prediction of tumor progression, CTCs are needed for more studies to evaluate the clinical prognostic value of TWIST (+) CTCs in esophageal cancer patients and overcome the challenges of standard CTC isolation and the diversity of CTC counting methods.

In summary, this meta-analysis suggests that Twist overexpression is associated with a poor esophageal cancer prognosis despite the limitations encountered by our study. Twist overexpression is correlated with T stage, lymph node metastasis, distant metastasis, TNM stage, and clinical stage, which indicates that Twist might accelerate esophageal cancer progression and metastasis. Furthermore, the sensitivity analyses implied that our meta-analysis yielded a stable and reliable estimate.

Twist can induce epithelial–mesenchymal transition (EMT) and cancer metastasis. However, the prognostic value of Twist expression in patients with esophageal cancer remains controversial.

To clarify whether Twist could be a promising biomarker for predicting prognosis in esophageal cancer.

To investigate the prognostic and clinicopathological value of Twist expression in esophageal cancer.

Published literature in several databases was searched for eligible articles. Participants with esophageal cancer whose tumor tissues underwent immunohistochemistry to detect the expression of Twist were considered when they met the inclusion criteria. The hazard ratio (HR) and relative ratio (RR) with their 95%CI were pooled. Heterogeneity was estimated by I2 statistics.

Our meta-analysis suggests that Twist might be a valuable prognostic biomarker in esophageal cancer.