To investigate whether and how glutamine metabolism affects the function of infiltrating CD8+ T cells in hepatocellular carcinoma.

Glutamine deprivation impairs the function of infiltrating CD8+ T cells in hepatocellular carcinoma through the mitochondrial damage and apoptotic pathways.

CD8+ T cells are important effector immune cells in the tumor microenvironment that primarily kill tumor cells by secreting granzyme B (GZMB) and perforin (PRF1)[1]. Owing to factors that include chronic stimulation by tumor antigens, the physicochemical state of the tumor microenvironment is imbalanced, including low pH, hypoxia, and low nutrition availability[2,3], which trigger T cell dysfunction and ultimately result in cell depletion[4,5]. Exhausted T (Tex) cells are characterized by loss of effector functions, elevated and sustained expression of inhibitory receptors (IRs), and a distinct metabolic profile[6,7]. Recently, the mechanisms of CD8+ T cell exhaustion have become a hot research topic, and there is increased interest on how changes in metabolomics correlate with changes in immune cell functions.

Tumor cells consume high levels of energy sources such as glucose[8], resulting in nutrient depravation in the tumor microenvironment. This deprives the energy sources of immune cells, altering the phenotype and function of affected immune cells[9]. Glutamine (Gln) is the most abundant free amino acid in serum[10]. Gln is not only involved in the occurrence, development, and metastasis of tumors[11,12], but also regulates the growth and function of immune cells[13]. Gln has been reported to regulate the phenotype of CD4+ cells, and increasing Gln levels can skew regulatory CD4+ T cells toward more inflammatory subtypes[14,15]. However, whether Gln also regulates CD8+ T cells and the mechanism underlying this regulation have not been reported.

Mitochondria are important intracellular organelles that provide energy and biosynthetic substrates for cell survival through oxidative phosphorylation[16]. Mitochondria are also highly nutrient-sensitive. When cells are deficient in nutrients, their mitochondria undergo depolarization and appear damaged. Damaged mitochondria can release pro-apoptotic proteins such as cytochrome c and other substances to induce the formation of apoptotic complexes that activate caspase 9, which causes apoptosis. Recent research has demonstrated mitochondrial damage in tumor tissues that is closely related to remodeling of the tumor microenvironment. It has also been shown in the literature that after glucose deprivation, CD8+ T cells in the tumor microenvironment produce reactive oxygen species (ROS), which subsequently trigger mitochondrial damage[17]. Whether Gln similarly regulates the function of mitochondria in CD8+ T cells is still unclear.

Therefore, this study investigated whether Gln regulates CD8+ T cell function through the mitochondrial damage and apoptotic pathways to clarify the relationship between Gln metabolism and CD8+ T cell depletion, which will lay a foundation for developing new anti-tumor treatments.

Immunohistochemical staining was performed on surgically resected tissues from patients with clinicopathologically confirmed hepatocellular carcinoma (HCC) and adjacent non-cancerous tissues. The study was approved by the Medical Ethics Committee of North China University of Science and Technology (No. 2018109).

HuH-7 and CD8+ T cells were co-cultured in transwell inserts for 3 d, and the initial number of both cell types used was equal.

Total RNA was extracted from CD8+ T cells, and total RNA sequencing (RNA-Seq) libraries were obtained by a three-step method: (1) RNA library construction and on-board sequencing were performed. Sequencing data were aligned to the reference genome of the project species to obtain comprehensive transcript information and to perform gene expression quantification; (2) The transcriptome sequencing project was completed on the Illumina sequencing platform (San Diego, CA, United States), and the IlluminaPE library (approximately 300 bp) was constructed for sequencing; and (3) The obtained sequencing data were analyzed by bioinformatics after performing quality control.

Cells in each group were digested to prepare cell suspensions at a density of 1 × 106 cells/mL. After discarding the supernatant, the cells were fixed with 3% glutaraldehyde fixative for 2 h and 1% osmic acid for 1 h. After dehydration with a graded ethanol series and acetone, the cells were embedded in epoxy resin, ultrathin sectioned, and double stained with uranium and lead. The ultrastructural changes of mitochondria in each group of cells were observed by transmission electron microscopy (TEM).

All analyses were performed with SPSS 21.0 software (IBM Corp., Armonk, NY, United States) and GraphPad Prism 8.0.2 (GraphPad Software, Inc., San Diego, CA, United States). Measurement data were first examined using the Kolmogorov-Smirnov test to check whether the measurement data of each group had a normal distribution. Results are expressed as the mean ± SE for measurement data with a normal distribution. Comparisons between two groups were performed using the two-tailed Student’s t test. One-way analysis of variance was used for multiple group comparisons, and the LSD-t test was used for pairwise comparisons. Significance was accepted at P < 0.05. 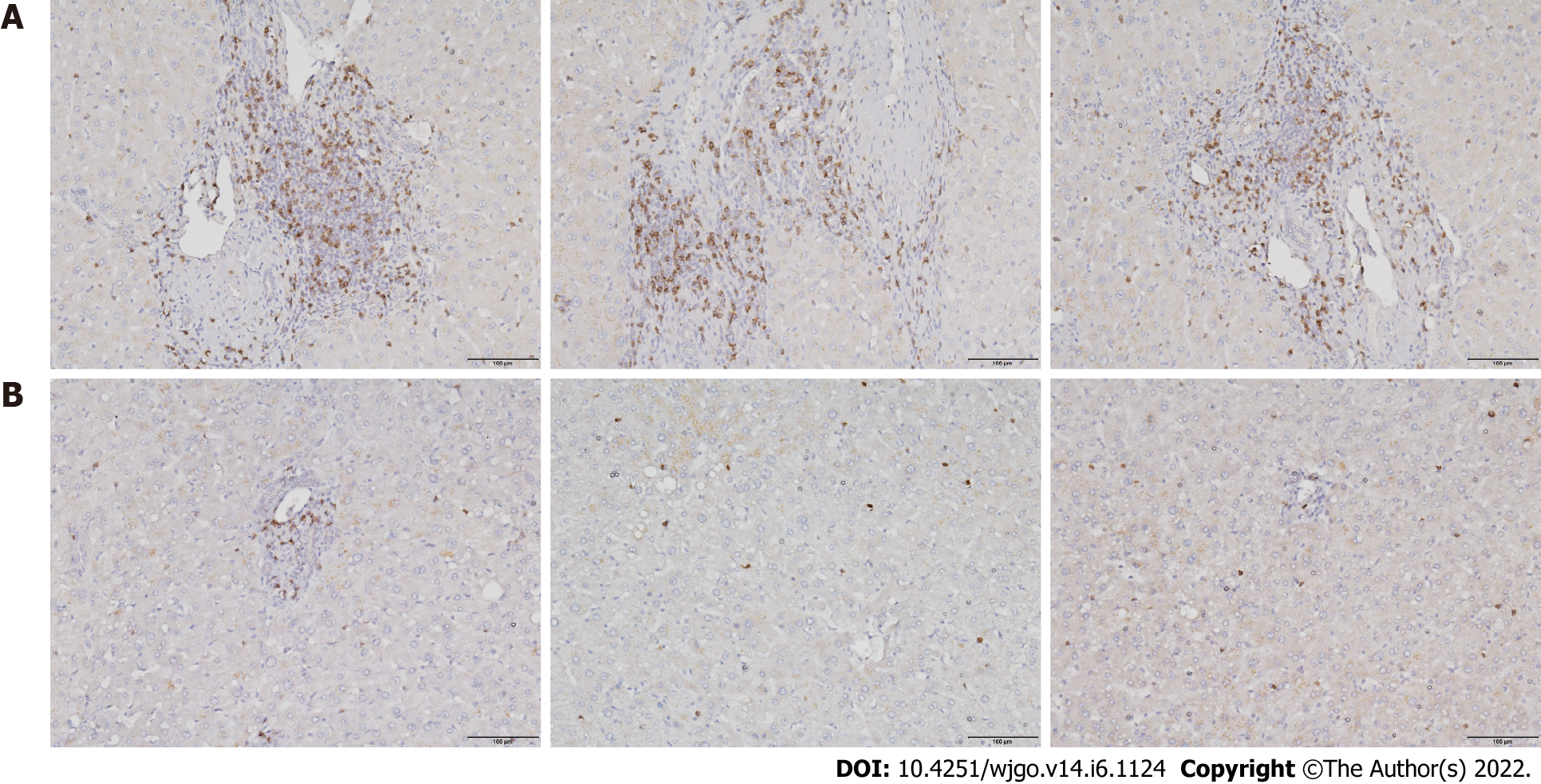 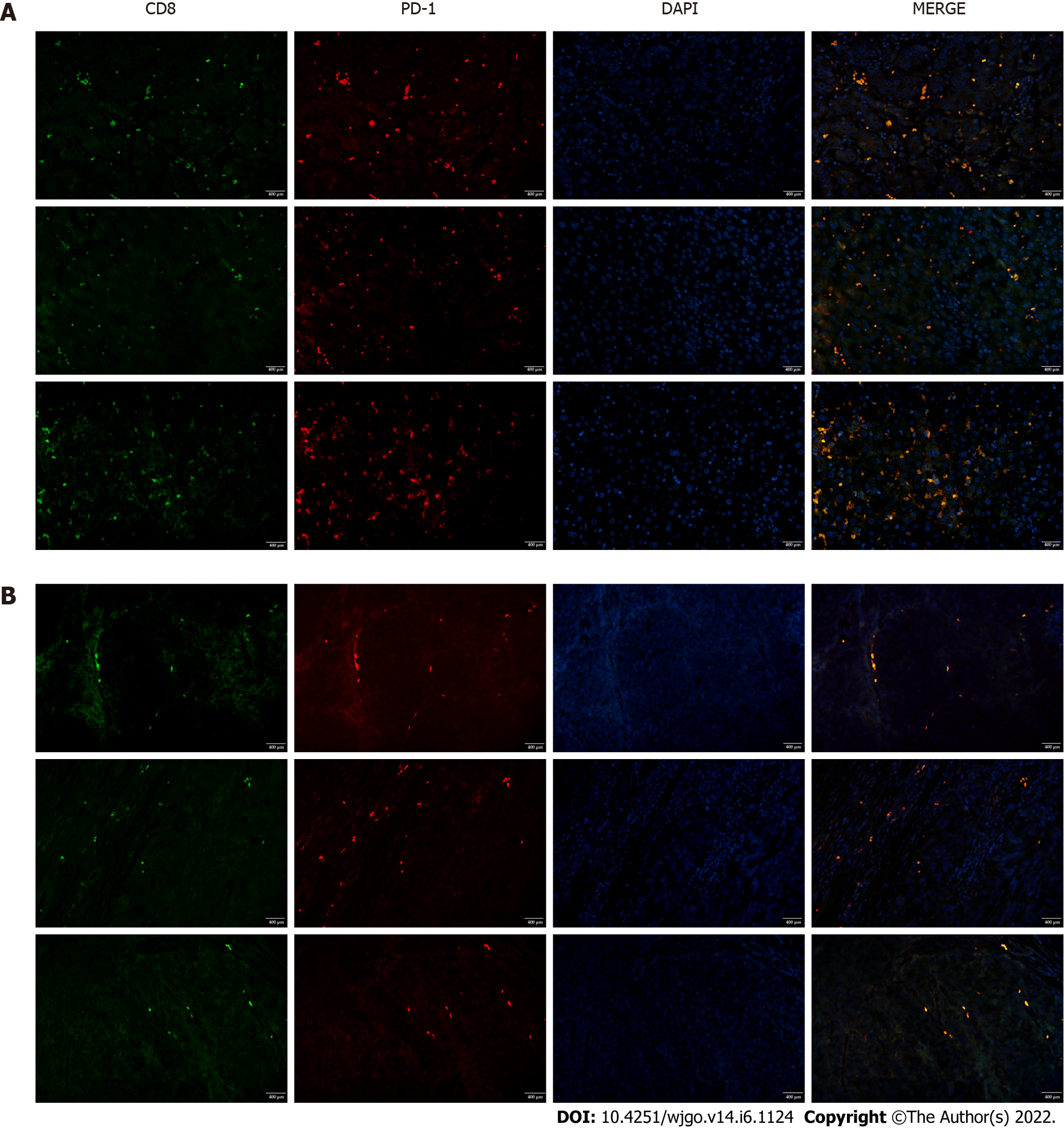 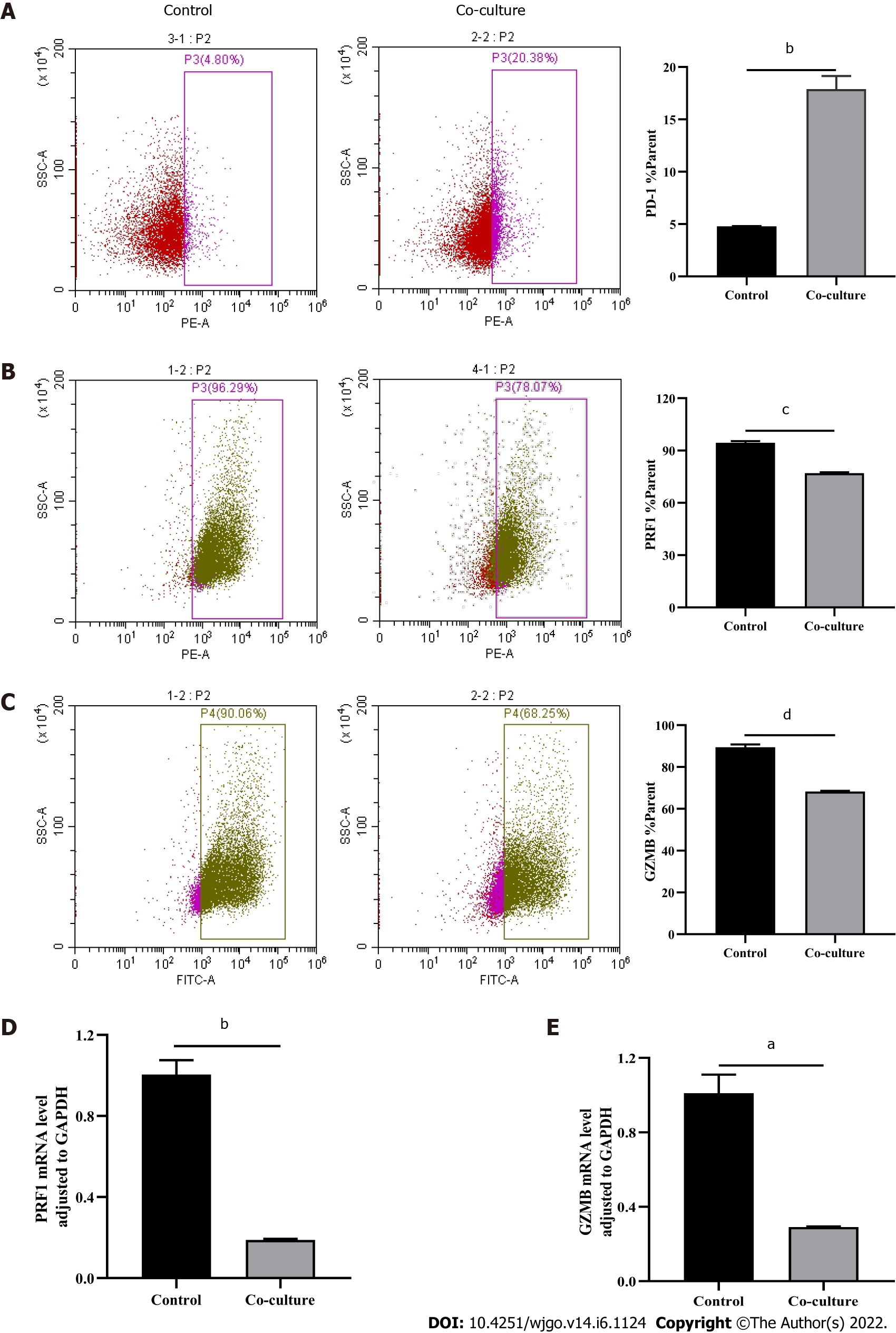 To explore the potential mechanisms of the functional impairment of T cells, we performed RNA-seq of CD8+ T cells co-cultured with Huh-7 cells. We found that genes related to mitochondrial damage (such as mitochondrion disassembly) and apoptosis (such as regulation of apoptotic pathways) were upregulated (Figure 4A). The expression of genes related to cell metabolism (such as multi-organism metabolic processes) and T cell function (such as T cell proliferation) was downregulated (Figure 4B). These data illustrated that CD8+ T cells co-cultured with hepatoma cells underwent alterations associated with cellular metabolism, mitochondrial damage, and apoptosis. 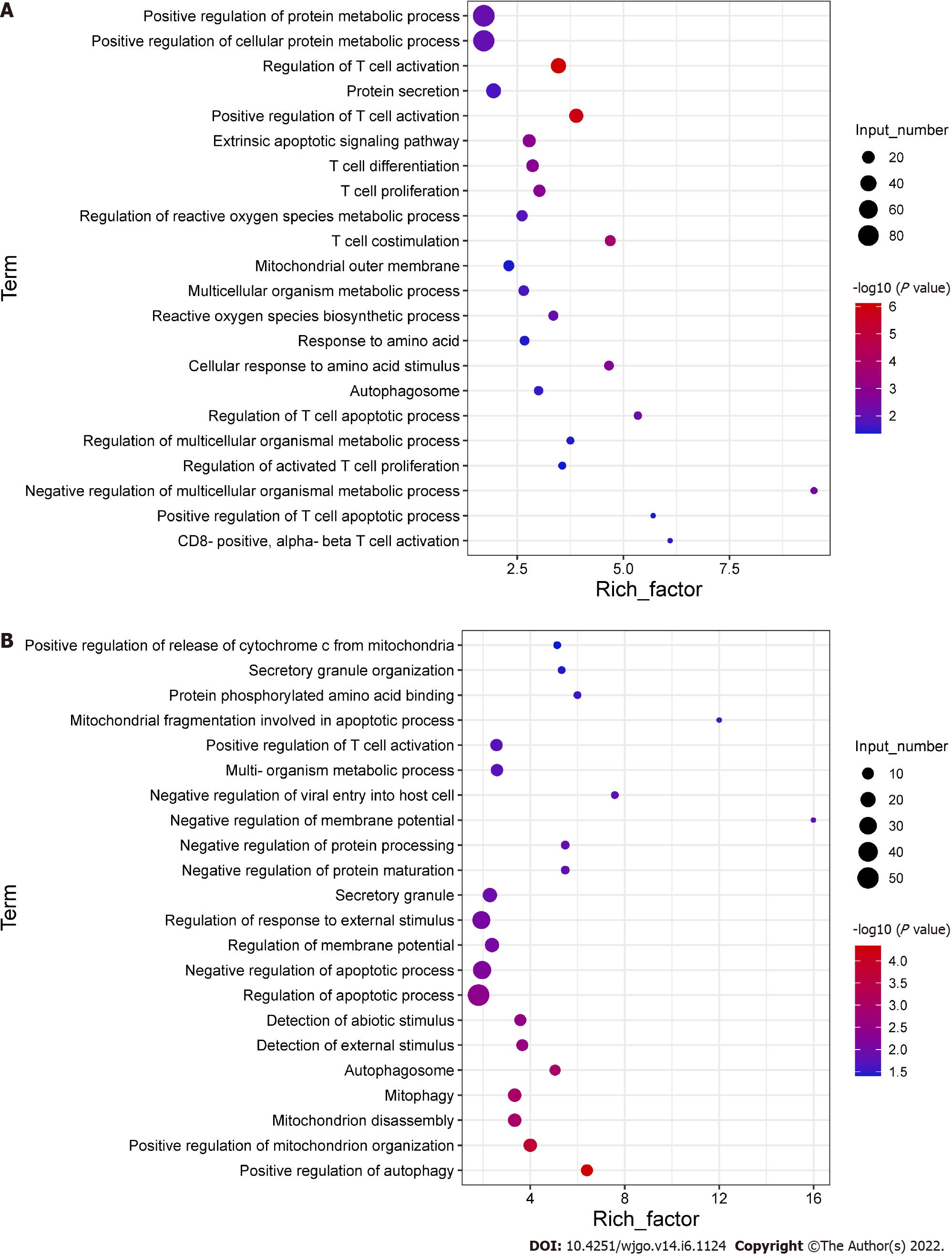 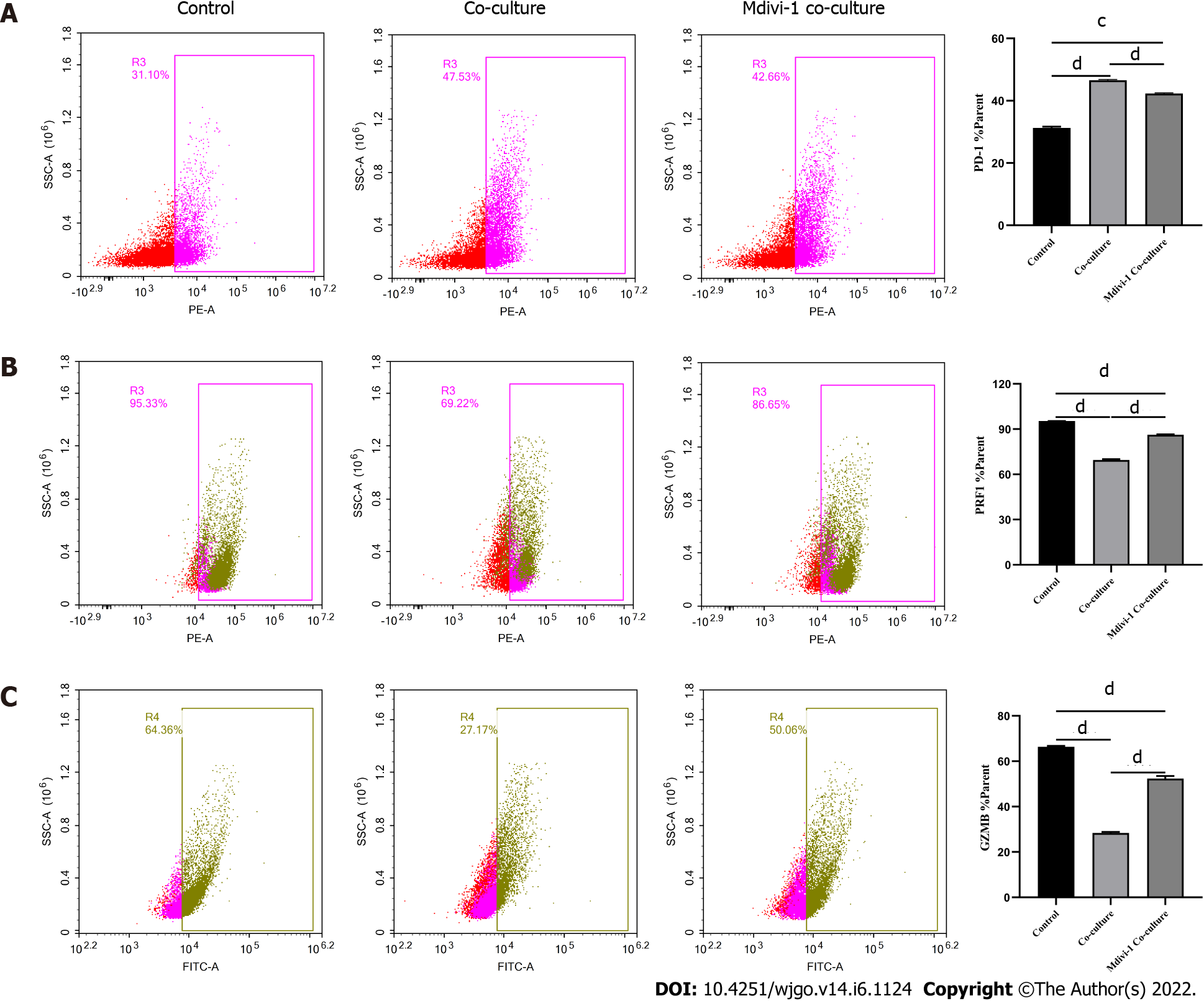 In the tumor immune microenvironment, CD8+ T cells are the main immune effector cells and play a crucial role in the host immune environment. A large number of CD8+ T cells infiltrate tumor tissues in patients. However, due to chronic stimulation by tumor antigens, most of the T cells are functionally impaired and have differentiated into CD8+ T ex cells, which mediate tumor immune escape[18-20]. Therefore, understanding the mechanism of decreased CD8+ T cell function is essential for tumor immunity. Tex cells are characterized by the loss of effector functions and elevated and sustained expression of IRs[6,21,22]. In this study, the expression of PD-1 was increased and the secretion of cellular effector molecules such as GZMB and PRF1 was decreased in CD8+ T cells from the co-culture group. Our observations illustrated that the function of infiltrating CD8+ T cells was suppressed by HCC cells. Therefore, we next explored the specific mechanisms via which CD8+ T cell function was inhibited.

Studies have shown that tumor cells inhibit anti-tumor immunity by competing for essential nutrients and reducing the metabolic adaptability of tumor-infiltrating immune cells, which in turn decreases the function of immune cells[28]. The nutrients required for cellular metabolism include glucose, amino acids, and fatty acids. Both tumor cells and activated T cells show a significant Gln requirement[29]. CD4+ T cells lacking Gln have diminished proliferative capacity and decreased cytokine secretion. We found that CD8+ T cells lacking Gln have a reduced ability to secrete effector molecules and increased expression of inhibitory receptors such as PD-1, suggesting that Gln deprivation inhibits the function of CD8+ T cells. In states of energy deficiency, mitochondrial function is abnormal, which further activates pro-apoptotic downstream regulators that induce apoptosis[30]. A previous study suggested that upon glucose deprivation, cells largely mobilize oxidative phosphorylation to maintain energy homeostasis, causing mitochondria to produce high levels of ATP and ROS[31]. Our data showed that in the absence of Gln, the mitochondria of CD8+ T cells underwent morphological changes with reduced mitochondrial membrane potential, generated high levels of ROS, and induced apoptosis. However, the above results were obtained only from in vitro experiments, and more details need to be further studied.

We found that Gln deprivation impairs the function of CD8+ T cells through the mitochondrial damage and apoptotic pathways.

To explore the effect of glutamine metabolism on the function of tissue-infiltrating CD8+ T cells, so as to provide a new strategy for reversing the exhausted CD8+ T cells in hepatocellular carcinoma.

This study aimed to investigate whether and how glutamine metabolism affects the function of infiltrating CD8+ T cells in hepatocellular carcinoma.

Glutamine deprivation impairs the function of infiltrating CD8+T cells in hepatocellular carcinoma through the mitochondrial damage and apoptotic pathways.

From this study, we confirmed the potential mechanisms of CD8+ T cell dysfunction induced by glutamine deprivation, which would provide a novel strategy for reversing the exhaustion of CD8+ T cells in hepatocellular carcinoma.