Angiogenesis inhibitors (AIs) combination with cytotoxic chemotherapy is a promising treatment for patients with colorectal cancer (CRC). Aflibercept (AFL) is an option for second-line treatment of CRC, according to the ‘VELOUR’ trial. Currently, we can choose from three AIs, including bevacizumab, ramucirumab, and AFL. Different AIs can be used in subsequent treatment because of their distinctive mechanisms of action. We addressed the uncertainty regarding AFL efficacy and safety in heavily-treated patients by comparing outcomes of survival treatment with second-line treatment.

To determine and compare the efficacy and safety profiles of AFL in the second-line and salvage therapy settings.

Clinical data of 41 patients with advanced CRC who received intravenous AFL combined with the folinic acid-fluorouracil-irinotecan (FOLFIRI) regimen were collected retrospectively from six institutions in Japan, for the period from May 2017 to March 2019. Patient characteristics collected included age, sex, tumor location, RAS and RAF status, metastatic sites, number of previous treatment cycles, therapeutic response, adverse events, duration of previous AI treatment, and survival time. The end points were time to AFL treatment failure (aTTF) and median survival time post-AFL (aMST). Statistical analyses were performed to compare the efficacy and safety in the second-line setting with those of the salvage therapy setting, which was defined as the days since the end of second-line therapy.

AFL can be used to treat advanced CRC patients, with a similar safety and efficacy in the salvage therapy setting as in the second-line setting.

Core Tip: We compared the efficacy and safety of aflibercept plus the folinic acid-fluorouracil-irinotecan regimen as salvage treatment with those of second-line treatment in patients with advanced colorectal cancer. In the second-line and salvage therapy settings, the objective response rates were 11% and 0%, respectively (P = 0.50). The disease control rates, times to aflibercept treatment failure, median survival times post-aflibercept, and incidences of adverse effects greater than or equal to grade 3 were similar in the two groups. Aflibercept could be safe and confer a survival benefit in patients with advanced colorectal cancer, regardless of the number of treatment lines.

Colorectal cancer (CRC) is the second leading cause of cancer-related death globally[1]. In Japan in 2017, more than 130000 people were newly diagnosed with CRC and more than 50000 patients died of this disease[2,3]. Surgery and endoscopic resection are currently the only curative therapies for CRC. Patients with unresectable metastatic CRC are given chemotherapy; also considered a standard-of-care chemotherapy for unresectable metastatic CRC are the angiogenesis inhibitors (AIs)[4-7].

Three Ais-bevacizumab (Bmab), ramucirumab (Rmab), and aflibercept (AFL)-have been used recently in the second-line setting[8-10]. AFL is a recombinant fusion protein containing vascular endothelial growth factor (VEGF)-binding portions from the extracellular domains of human VEGF receptors 1 and 2, which are fused to the Fc portion of human immunoglobulin G1. AFL blocks the activity of VEGF-A, VEGF-B, and placental growth factor by acting as a high-affinity ligand trap to prevent these ligands from binding to their endogenous receptors[11,12]. In the ‘VELOUR’ trial, a survival benefit was demonstrated when AFL addition to the folinic acid-fluorouracil-irinotecan regimen (FOLFIRI) was compared with placebo and FOLFIRI alone[10]. However, no means of choosing among the three AIs in the second-line setting has been established because of the absence of direct comparisons.

As the three AIs have their own mechanisms for inhibiting the VEGF pathway, it is quite natural to use all in series for treatment of CRC. It is uncertain, however, whether AFL is effective and safe in heavily-treated patients. Therefore, we compared the efficacy and safety of AFL used in salvage therapy with those during its use in second-line treatment. For this purpose, we organized the All Akita Aflibercept (AAA) group, which included the following six institutions in Japan: Omagari Kousei Medical Center, Akita Kousei Medical Center, Akita City Hospital, Nakadori General Hospital, Japanese Red Cross Akita Hospital, and Akita University Hospital in Akita.

Clinical data of patients with advanced CRC treated with AFL as second-line or later treatments were retrospectively collected by the AAA group for the period from May 2017 to March 2019. Patients’ information collected included age, sex, primary tumor location, RAS and BRAF status, metastatic sites, complications, cycles of prior chemotherapies, therapeutic drug types, treatment response, adverse events (AEs), duration of prior treatment with AIs, and survival time after initial AFL administration. We divided the patients into two groups: The first included patients treated with AFL in the second-line setting, and the second included patients treated with AFL as salvage therapy. Salvage therapy was defined as treatment after second-line therapy.

This study was conducted in accordance with the Declaration of Helsinki. The protocol was approved by the Institutional Review Board at Akita University in November 2018 (#2070). Informed consent was not acquired from all participants, but information regarding this study and an opt-out option appeared on our institution’s website (https://www2.hos.akita-u.ac.jp/chiken/info/pdf/20181122_2070.pdf).

Patients received 4 mg/kg of AFL intravenously (IV) over 1 h on day 1 every 2 wk, followed by the FOLFIRI regimen (150 mg/m2 of irinotecan IV over 90 min, with 200 mg/m2 of levofolinate IV over 2 h, followed by 400 mg/m2 of 5-fluorouracil bolus and 2400 mg/m2 of 5-fluorouracil continuous infusion over 46 h)[10]. Irinotecan was used at a dose of 180 mg/m2 in the VELOUR trial but the approved dose in Japan is 150 mg/m2; we chose to use that dose in our study. Supportive care (e.g., antiemetics, anticholinergics, etc.) as well as dose modification and discontinuation were conducted promptly. 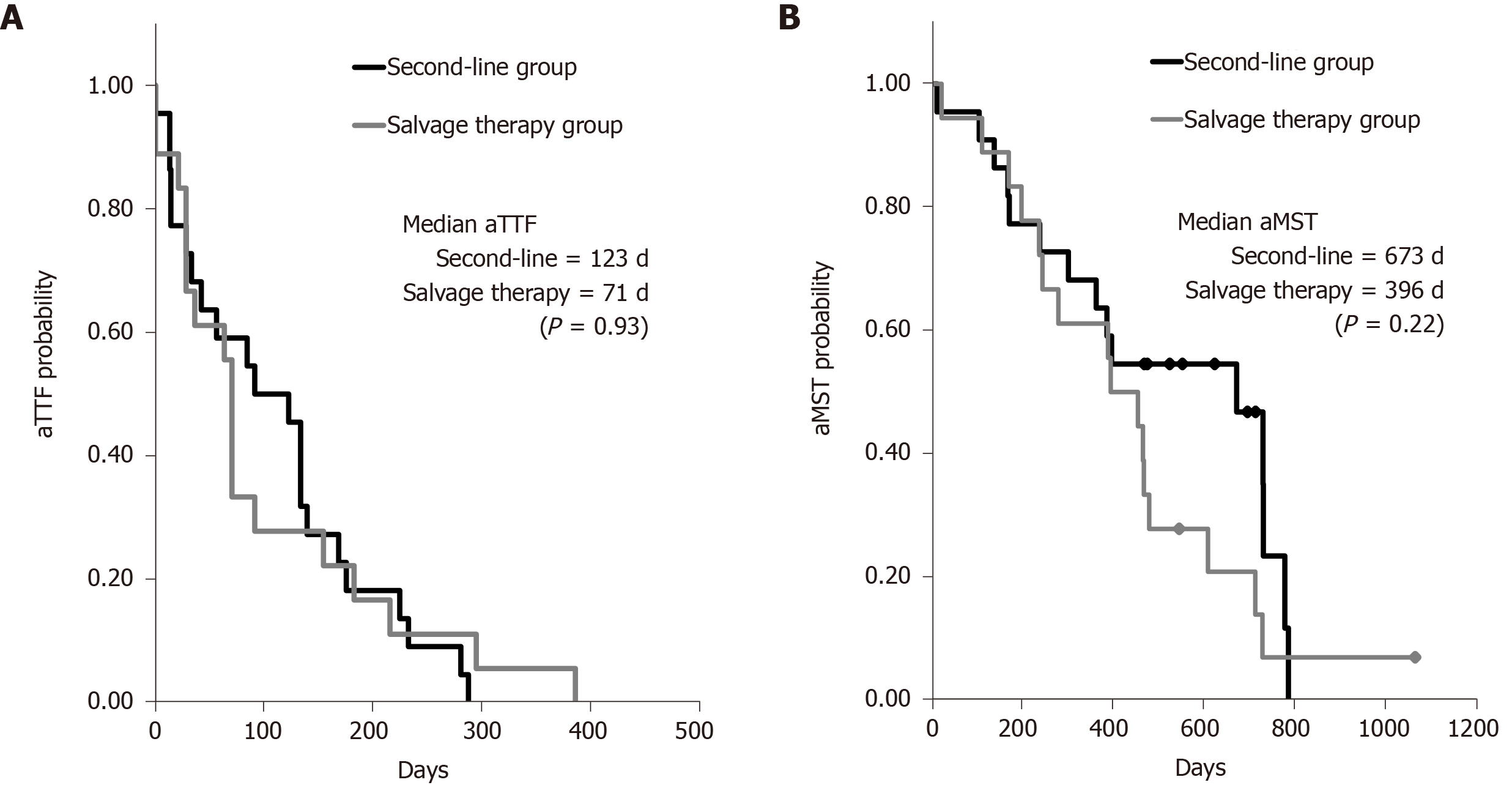 We gathered the data in the literature including rather smaller number of patients as many as 20 patients, where the AIs were applied in the salvage setting (Table 4). There are two Rmab papers, three Bmab papers, and one AFL paper. We compared the efficacies (PFS and overall survival) and safety (the rate of the adverse events) with ours. There were no differences in the efficacy with 3 AIs in the salvage lines, but the Bmab was most safety among them, followed by AFL and Rmab in this order.

Currently, we have three AIs for the treatment of metastatic CRC, all of which have individual targets. For example, Bmab targets VEGF-A, and Rmab targets VEGF receptor 2, which receives VEGF-A, VEGF-C and VEGF-D signaling[17]. However, it is difficult to determine differences between the treatment from the results of previous clinical trials. When we use the AIs sequentially, a different inhibitory mechanism from that of the previously used AI might exert a suppressive effect on the remaining tumor. Our observation might be a hint towards the sequential use of AIs. Actually, it was reported that the MST was 11.1 mo for patients who were treated with AFL in the third-line and 8.1 mo for those treated in the fourth-line[18]. As our conclusion has been drawn from exploratory observation, it should be confirmed by a prospective study composed of a larger number of participants. In summary, AFL might be safe and confer a survival benefit in patients treated in later lines as well as in the second-line.

We usually use angiogenesis inhibitors (AIs) for chemotherapy in metastatic colorectal cancer (CRC). Aflibercept (AFL), one of the AIs, has been shown to be effective in second-line treatment by the ‘VELOUR’ study.

We can choose three Ais-bevacizumab, ramucirumab, and AFL-for treating with second-line chemotherapy. No means of choosing among the three AIs has been established because of the absence of direct comparisons.

We researched whether AFL is a treatment option for second-line chemotherapy with CRC in the ordinary clinical setting in Akita, Japan.

Medical records including age, sex, primary tumor location, RAS and BRAF status, metastatic sites, cycles of prior chemotherapies, survival time after initial AFL administration, etc. were collected from each institution. We investigated the efficacy and safety for AFL via a statistical approach.

Our study indicated that the efficacy and safety was the same as in the VELOUR study and that AFL contributes survival benefit similarly in both the second-line and salvage therapy settings. Patients with unresectable metastatic CRC should consider receiving AFL, regardless of number of treatment cycles.

AFL is a promising agent, along with chemotherapy, for CRC. Further study should verify whether AFL will be affected by sequential therapy; for example, investigating the particular regimen used as first-line therapy before AFL administration.

The authors would like to thank Sato Y and Ota S for their contributions to this study.