Core Tip: Malignant hepatic vascular neoplasms are rarely encountered in the pediatric population. This review highlights the clinicopathologic characteristics of pediatric hepatic angiosarcoma and epithelioid hemangioendothelioma. They have variable clinical and radiological findings; therefore, histologic examination is the gold standard for diagnosis. Hepatic angiosarcoma in children is characterized by whorls of spindled cells and eosinophilic globules histologically. Meanwhile, epithelioid hemangioendothelioma shows epithelioid cells with intracytoplasmic lumina and a fibromyxoid background. Diagnostic challenges and molecular alterations of these entities are discussed in the article.

Malignant liver tumors are rare in the pediatric population, comprising approximately 1.1% of all childhood malignancies in the United States[1]. The most common malignant hepatic tumors in children are those of epithelial origin (hepatoblastoma and hepatocellular carcinoma). Meanwhile, the less frequent malignant neoplasms of mesenchymal origin include undifferentiated embryonal sarcoma, rhabdomyosarcoma, and malignant vascular tumors[1,2]. Hepatic vascular lesions in children, both benign and malignant, may pose diagnostic challenges because of the confusing terminology and their overlapping clinical, radiologic, and pathologic features[3].

The use of previous terminology for hepatic vascular lesions in children (types 1 and 2 hemangioendothelioma) is discouraged, as these diagnostic terms have led to confusion in diagnosis and management[3]. We recommend the use of classification by the International Society for the Study of Vascular Anomalies (ISSVA) instead. This classification system was developed to allow a better understanding of the biology and genetics of vascular lesions and serves as a guide to clinicians, pathologists, and researchers[4]. For the complete list of vascular anomalies (updated in 2018), please review the ISSVA document (https://www.issva.org/UserFiles/file/ISSVA-Classification-2018.pdf).

Based on the biologic behavior, primary hepatic vascular tumors can be grouped into benign, borderline, and malignant lesions. Christison-Lagay et al[5] classify benign hepatic vascular lesions (hemangiomas) according to their clinical presentations into focal, multifocal, and diffuse hepatic hemangiomas. Histologically, focal hepatic hemangiomas are in keeping with rapidly involuting congenital hemangiomas. Meanwhile, multifocal and diffuse hepatic hemangiomas correspond to infantile hemangiomas. Kaposi sarcoma, primarily seen in immunocompromised patients, represents borderline vascular tumors of the liver. Hepatic malignant vascular lesions include angiosarcoma and epithelioid hemangioendothelioma; in this article, we will review the clinicopathologic characteristics of these two entities with a focus on the pediatric population.

Angiosarcoma is a malignant vascular neoplasm that recapitulates morphological and immunohistochemical features of endothelial cells. The lesion is more commonly seen in elderly men, and usually involves the cutaneous and deep soft tissue[3]. In the pediatric population, mediastinum is a frequent site of involvement[6]. Pediatric hepatic angiosarcoma is exceptionally rare and has only been described in case reports or small case series[7]. In this age group, hepatic angiosarcoma shows a slight female predominance and the average age of presentation is 40 mo[8]. The pathogenesis of hepatic angiosarcoma in children is unclear. The association between angiosarcoma and exposure to thorotrast, vinyl chloride, androgenic and anabolic steroids, oral contraceptives, and diethylstilbestrol, as described in adults, is usually not identified in children since it requires several years of environmental exposure prior to tumor detection[8,9]. Only one case of pediatric hepatic angiosarcoma has been associated with arsenic exposure[10]. Moreover, there is no recognized syndromic or genetic association. However, pediatric hepatic angiosarcoma has been associated with different conditions, such as multiple cutaneous infantile hemangiomas[11], cutaneous mixed vascular malformations[12], and dyskeratosis congenita[13].

Children with hepatic angiosarcoma usually present with abdominal pain and distension due to rapid liver enlargement. Metastatic disease is common at diagnosis, particularly to the lungs[3,7,8]. The tumor also occasionally ruptures and leads to hemoperitoneum[2]. Other signs and symptoms include jaundice, vomiting, fever, dyspnea, and anemia[8]. The imaging features of hepatic angiosarcoma are variable and may be mistaken for benign entities such as infantile hemangioma[2]. On ultrasound, the lesion may present as solitary or multifocal, heterogeneous hypoechoic to isoechoic nodules. Computerized tomography scan often demonstrates peripheral nodular and irregular hypervascularity with arterial hemorrhage. Moreover, magnetic resonance imaging generally shows marked heterogeneity on T2-weighted images and all phases of post-contrast images, and bizarre progressive filling (instead of centripetal)[2]. Because of the nonspecific clinical and imaging findings, tissue examination remains the gold standard for the diagnosis of hepatic angiosarcoma. 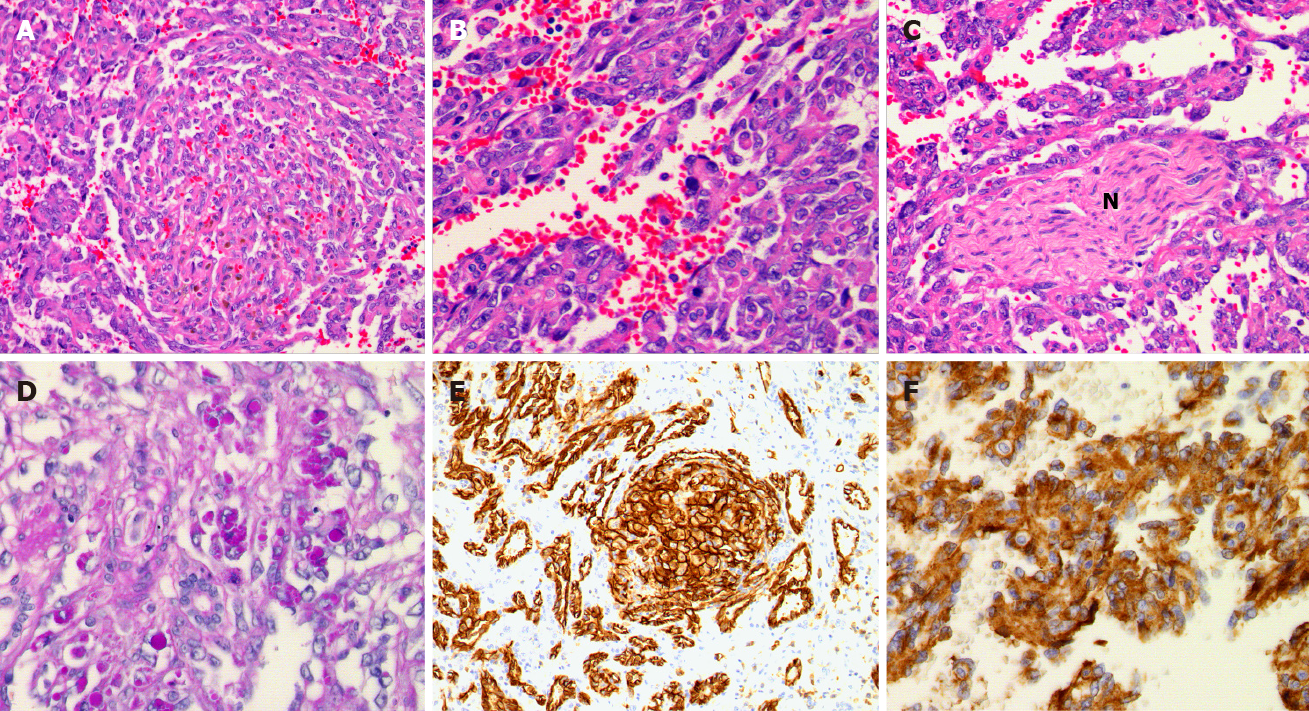 Pathologic diagnosis of pediatric hepatic angiosarcoma is not always straightforward. The lesion can have regions of small channels with bland appearing endothelium, mimicking infantile hemangioma. Potential for malignant transformation of benign vascular tumors and focal GLUT-1 positivity also make the distinction between hepatic angiosarcoma and infantile hemangioma challenging[3,7,9]. Moreover, a definitive diagnosis is sometimes difficult to render because of limited tissue or sampling. Hepatic angiosarcoma should be considered in cases of infantile hemangiomas diagnosed in patients greater than one year of age. A malignant diagnosis should also be suspected in infantile hemangiomas which are resistant to treatment, recur, or do not regress within two years of age[8,9]. Hepatic angiosarcoma showing markedly atypical cells should be distinguished from other high-grade lesions, such as undifferentiated embryonal sarcoma, rhabdomyosarcoma, and malignant rhabdoid tumor. Immunohistochemistry is usually helpful to exclude these differential diagnoses. In adults, hepatic angiosarcoma has been reported concomitantly with mesenchymal hamartoma with or without undifferentiated embryonal sarcoma component[19-21]. This association, however, has not been observed in pediatric patients. Finally, the possibility of metastatic disease should be ruled out radiologically, as secondary involvement of the liver by angiosarcoma of various primary sites (skin, spleen, and mesentery) has been reported in children[6,22-25].

Antonescu et al[26] reported upregulation of vascular-specific receptor tyrosine kinases in primary and radiation-induced angiosarcomas. Meanwhile, MYC amplification is exclusively observed in radiation-induced and chronic lymphedema-associated angiosarcomas[27]. In addition, a subset of angiosarcomas in young adults is associated with CIC gene abnormalities, which show an inferior outcome[28]. There are, however, no known signature molecular alterations in pediatric hepatic angiosarcoma. Marks et al[29] reported a novel gene fusion of ROS1-GOPC in hepatic angiosarcoma of a 50-year-old woman. Although the finding has not been confirmed by other studies, it has a potential clinical significance because of the established anti-cancer activity of tyrosine kinase inhibitors in tumors with ROS1 rearrangements.

Pediatric hepatic angiosarcoma has a dismal prognosis, with a 5-year overall survival less than 30%[3]. The majority of patients succumb to disease within 12 mo after diagnosis[2]. Currently, there is no established consensus on management of pediatric hepatic angiosarcoma. Management generally depends on the extent of disease and usually involves the combination of chemotherapy, neoadjuvant or adjuvant, with surgical resection (when possible)[2,3]. Other treatment options with limited success include embolization, radiation, liver transplantation, and targeted therapy, such as mammalian target of rapamycin and vascular-specific receptor tyrosine kinase inhibitors[2,3,7]. 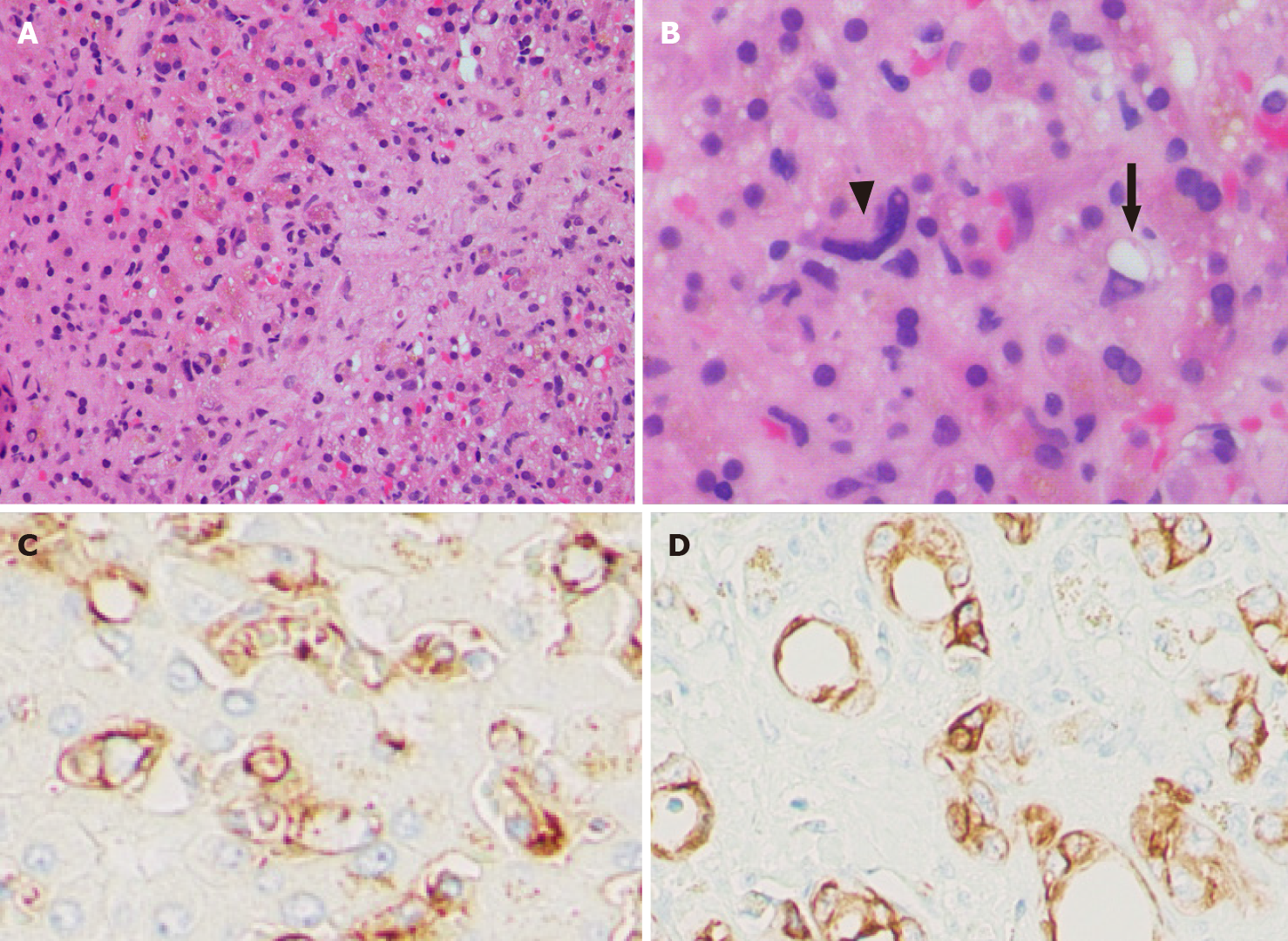 Epithelioid hemangioendothelioma is associated with t (1; 3) (p36; q25) and t (11; X) (q13; p11) translocations, which correspond to WWTR1-CAMTA1 and YAP1-TFE3 gene fusions, respectively[37-40]. The WWTR1-CAMTA1 translocation results in a fusion protein which allows for a TAZ-like transcriptional program and leads to oncogenesis[30]. Immunohistochemistry for CAMTA-1 and TFE3 is also useful to confirm these gene fusions[38,40]. The WWTR1-CAMTA1 and YAP1-TFE3 gene fusions are identified in 90% and 10% of epithelioid hemangioendothelioma cases, respectively[30].

Malignant hepatic vascular neoplasms in the pediatric population, including angiosarcoma and epithelioid hemangioendothelioma, are rarely encountered. Table 1 summarizes the clinicopathologic characteristics of these lesions. We recommend the use of the ISSVA classification system for the pathologic diagnosis of hepatic vascular lesions in children. Currently, there are no established management guidelines for both pediatric hepatic angiosarcoma and epithelioid hemangioendothelioma because of their rarity and heterogeneous presentations. Advancement in molecular pathology, particularly for pediatric hepatic angiosarcoma, could potentially lead to a better understanding of the disease biology, diagnosis, and development of targeted therapies.