Mucinous cystic neoplasm (MCN) of the pancreas is characterized by mucin-producing columnar epithelium and dense ovarian-type stroma and at risk for malignant transformation. Early diagnosis and treatment of MCN are particularly important.

The clinical and pathological data of 82 patients with pancreatic MCA and MCC who underwent surgical resection at our department between April 2015 and March 2019 were retrospectively analyzed.

Tumor size, age, and serum CEA, CA19-9, and CA12-5 levels may contribute to management of patients with MCN. Surgical resection is the primary treatment modality for MCC and MCA.

Core tips: In this study, we retrospectively analyzed the clinical and pathological records related with pancreatic mucinous cystadenoma (MCA) and mucinous cystadenocarcinoma (MCC). We found that the MCC tumor size was larger than that of MCA, and age, serum carcinoembryonic antigen, carbohydrate antigen (CA) 19-9, and CA12-5 levels were also higher in MCC patients. As the tumor size of MCA increased, the level of serum CA19-9 also increased. Surgical resection is the primary treatment for MCC and MCA.

Mucinous cystic neoplasm (MCN) is a cyst-forming epithelial tumor composed of ovarian-type stroma and mucin-producing columnar epithelium[1]. It is a rare pancreatic disease that does not communicate with the pancreatic duct[2]. Currently, owing to the development of imaging and endoscopic techniques, as well as the increased understanding of the disease, the detection rate of MCN has been increasing every year. The biological characteristics of MCN can potentially lead to the development of malignant tumors, and atypical columnar cell hyperplasia can be observed on most cyst walls[3,4]. Mucinous cystadenocarcinoma (MCC) may be formed via the malignant transformation of MCN with the same origin. It is generally discovered when patients present at the clinic with obstructive jaundice and evident abdominal mass. MCC has a poor sensitivity to radiotherapy and chemotherapy, and surgical resection is the primary treatment modality for MCC[5]. Early diagnosis and treatment of MCN are particularly important because of the potentially malignant manifestations and the lack of specific clinical symptoms. Therefore, this study retrospectively analyzed the data of 82 patients with pancreatic MCN who underwent surgical resection at our department between April 2015 and March 2019.

Between April 2015 and March 2019, a total of 82 patients who underwent surgery at our department were included, of whom 70 had mucinous cystadenoma (MCA) and 12 had MCC as confirmed by postoperative pathology findings. The pancreatic MCN was defined as a pancreatic cystic tumor lined by columnar mucin-producing cells and overlying ovarian-type stroma. Carcinoma in situ and invasive carcinomas were considered malignant (MCC) and other MCN considered as MCA in this study. The baseline characteristics of the patients are shown in Table 1.

Statistical analyses were performed using SPSS 22. Continuous variables are expressed either as the mean ± SD or median and interquartile range (IQR) depending on whether a normal distribution was verified. Specifically, data on age were normally distributed, and t test was used for comparisons; data on tumor size, serum carcinoembryonic antigen (CEA), carbohydrate antigen (CA) 125, and CA19-9 did not follow a normal distribution, and Mann–Whitney U test was used for comparisons. Correlation testing was conducted using Spearman rank correlation test. Discrete data are represented as rates (%), and were compared using Fisher's exact test. A P value < 0.05 was considered statistically significant.

According to the pathology examination of the postoperative paraffin sections, there were 12 patients with MCC (including 3 cases of carcinoma in situ) and 70 patients with MCA. 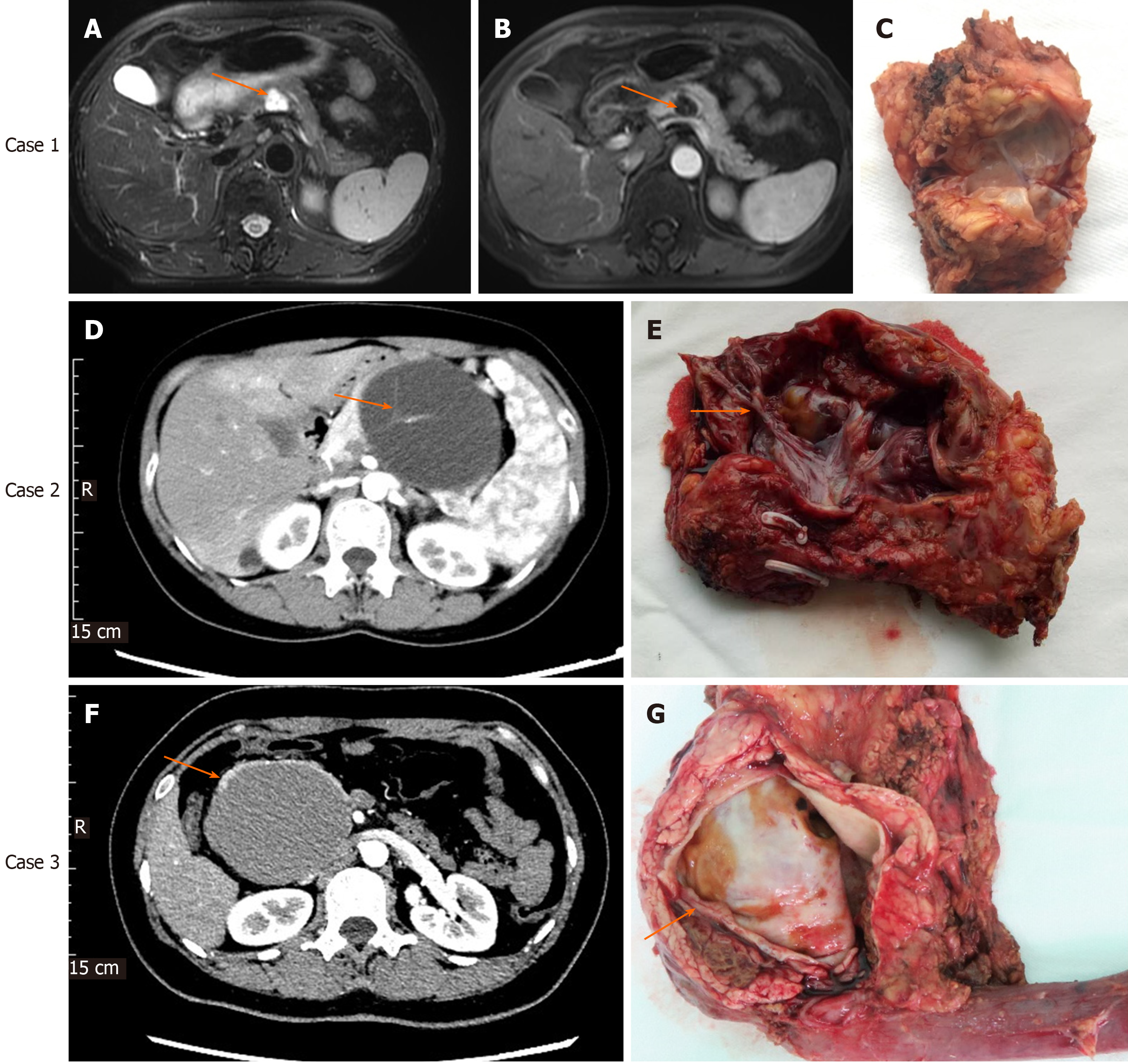 MCA is generally unilocular or multilocular, with a cyst diameter > 2 cm, and the internal fibrous septations are more apparent after enhancement[13,14]. Studies have drawn different conclusions regarding the specific threshold value of cyst diameter over which the risk of malignancy is increased. It is generally believed that the cyst wall diameter in malignant MCN is usually > 4 cm[15], or that a diameter of ≥ 6 cm is a risk factor for malignant tumors[11,16,17]. In addition, other manifestations suggestive of malignant MCA include peripheral calcification, irregularly contoured cyst walls, thickening of internal septations, increased papillary projections, intracystic nodules, local organ invasion, and vascular obstruction and compression. Di Paola et al[16] studied 65 patients with MCNs who underwent magnetic resonance imaging and found that there may be a risk of malignant transformation if the diameter is greater than 7 cm, septa and wall thickness was > 3 mm, and there were nodules. In this study, the median diameter of MCA was 3.5 cm and that of MCC was 5.8 cm. The MCC size was larger than that of MCA. Because malignant MCN less than 4 cm is rare (0.03%[18]), European Guidelines use this as a cut-off size for surveillance without resection[19]. However, one (8.3% of MCCs) patient in the current study with a tumor of 2.5 cm had invasive carcinoma. The cut-off value of tumor size might be reconsidered in the future revisions of guidelines.

Recently, a large multicenter study[1] on MCN showed that older age, high levels of serum CEA or CA19-9, large tumor size, and the presence of mural nodules were risk factors for MCC. Similar results were also observed in the current study. Age and serum levels of tumor markers CEA, CA19-9, and CA12-5 were significantly higher in MCC than in MCA patients. In addition, our study showed that the MCA tumor size was positively correlated with the level of serum CA19-9.

Given the challenges in the diagnosis of pancreatic cystic diseases, as well as the high malignant potential of MCN, the International Association of Pancreatology consensus guidelines recommended surgical resection. However, conventional laparotomy is associated with several issues, such as an overly large incision, delayed recovery, and significant psychological burden on the patients. With the development of minimally invasive technology, the use of laparoscopy and robotics has successfully eliminated the above-mentioned problems. Especially for younger patients, there is an urgent need for aesthetics of the wound and high quality of life after operation. Compared with laparoscopy, robotic surgery has distinct technical advantages, including the high-definition three-dimensional stereoscopic visualization, the flexible biomimetic mechanical wrist, and the stable tremor-free arm[20,21]. These advantages allow for the precise dissection and fine suturing required in pancreatic surgery[22,23]. In this study, the minimally invasive operation rate in the MCA group was 94.3%, which was higher than that (66.7%) of the MCC group. In minimally invasive surgery, robotic procedures accounted for the majority. Among patients with MCA included in the present study, 65.7% underwent distal pancreatectomy, 12.9% underwent pancreaticoduodenectomy, 4.3% underwent central pancreatectomy, and 17.1% underwent enucleation. For patients with MCC, 58.3% underwent distal pancreatectomy and 41.7% underwent pancreatico-duodenectomy. Distal pancreatectomy is a common surgery for MCN and the spleen should be preserved as much as possible for patients with MCA. In the MCA group, the rate of major complications was 5.7% and that of grade B pancreatic fistula was 8.6% with no grade C, which were slightly lower than other reports on pancreatectomy available in the literature[24,25].

This study had several shortcomings. First, the number of patients included is small, and as a single-center study, there may be statistical bias. Second, this study is retrospective; thus selection bias cannot be eliminated. The conclusions of this study still need to be validated in multi-center large-scale studies in the future.

In summary, MCN is commonly found in middle-aged women and typically occurs in the body and tail of the pancreas. Most MCN are oligocystic or macrocystic lesions with malignant potential. There remain considerable challenges for a definite diagnosis prior to surgery. Older age, high levels of serum CEA, CA19-9, or CA12-5, large tumor size, and the presence of mural nodules were risk factors for MCC. Minimally invasive surgical resection is a safe and effective treatment modality for patients with MCC and MCA.

Mucinous cystic neoplasm (MCN) of the pancreas is characterized by mucin-producing columnar epithelium and dense ovarian-type stroma and at risk for malignant transformation. Early diagnosis and treatment of MCN are particularly important.

We comprehensively evaluated the clinical and pathological characteristics of MCA and MCC and further explored effective treatment strategy.

The clinical and pathological data of 82 patients with pancreatic MCA and MCC who underwent surgical resection at our department between April 2015 and March 2019 were retrospectively analyzed.

Of the 82 patients included in this study, 70 had MCA and 12 had MCC. Tumor size of MCC was larger than that of MCA. Age and serum levels of tumor markers carcinoembryonic antigen (CEA), CA19-9, and CA12-5 were significantly higher in MCC than in MCA patients. MCA tumor size was positively correlated with serum CA19-9 levels. Compared with MCC, MCA had a higher minimally invasive surgery rate. In the MCA group, the rate of major complications was 5.7% and that of clinically relevant pancreatic fistula was 8.6%; the corresponding rates in the MCC group were 16.7% and 16.7%.

Tumor size, age, and serum CEA, CA19-9, and CA12-5 levels may contribute to management of patients with MCN. Surgical resection is the primary treatment modality for MCC and MCA.