Endoscopic transpapillary brush cytology and forceps biopsy during endoscopic retrograde cholangiopancreatology are generally used to obtain pathological evidence of biliary strictures. Recently, the new endoscopic scraper Trefle® has been reported and demonstrated high cancer detectability in malignant biliary strictures. This device is used to scrape the stricture over the guidewire, and, in the original method, the tissue and/or cell samples obtained are subjected to histological and/or cytological analysis separately. However, discrimination of chunks of tissue is hampered by the opacity of the surrounding fluid. We have developed a cell block technique for the Trefle® device without dividing obtained specimens into tissue and cellular components, which is the simplest method and enables immunohistochemical analysis. We present a case of obstructive jaundice diagnosed immunohistochemically as pancreatic metastasis from colon cancer using cell block sections obtained with the Trefle® device, which procedure is as easy as conventional brush cytology.

Core tip: We described a case of pancreatic metastasis from colon cancer in which cell block technique with the specimens obtained by the new endoscopic device Trefle® was useful in the differential diagnosis from pancreatic cancer. The combination of cell block technique and Trefle® might be a promising method in the diagnosis of biliary strictures because this procedure is as easy as conventional brush cytology.

Accurate diagnosis of biliary strictures is challenging, despite development of various imaging modalities. It is essential to diagnose the cause of biliary strictures using pathological evidence prior to selection of the appropriate therapy. Endoscopic transpapillary brush cytology during endoscopic retrograde cholangiopancreatology (ERCP) is conventionally used to obtain specimens for pathological diagnosis of biliary strictures, because it is technically easy and rapid. To provide larger tissue samples and improve sensitivity, endoscopic transpapillary forceps biopsy is also frequently performed[1,2]. However, forceps biopsy is technically more difficult and time-consuming than brush cytology[3,4]. Benign and malignant lesions can be diagnosed using cytology specimens, but these cannot be subjected to immunohistochemical analysis, despite its utility for differential diagnosis. The Trefle® endoscopic scraper (Piolax Medical Devices, Yokohama, Japan) enables detection of cancer in malignant biliary strictures[5]. This device has three scraping loops and was designed to access biliary strictures over the guidewire and obtain tissues and/or cell samples for histology or cytology. The procedure using the Trefle® device is almost identical to that for conventional brush cytology; scraped tissues and/or cell samples, together with bile juice, are aspirated from the side port of the outer sheath into a syringe. In the original method, after allowing the aspirate to settle in a sterile tube, specimens were divided into tissue and fluid components for histological and cytological analyses, respectively. However, discrimination of chunks of tissue is hampered by the opacity of the surrounding fluid. Therefore, a simpler method of processing specimens obtained using the Trefle® device is required.

The cell block technique improves diagnostic yield and facilitates immunohistochemical analysis[6-9]. We typically use the Trefle® device to obtain specimens from biliary strictures, which, together with aspirated bile juice and affixed tissues, are poured into a sterile tube. The tube is sent to the Pathology Department for evaluation by the cell block method, which enables differentiation of benign from malignant lesions, as well as immunohistochemical analysis during any time of need. We report here a case of obstructive jaundice with pancreatic metastasis from colon cancer, differential diagnosis of which from pancreatic cancer was performed by immunohistochemical examination of cell block sections obtained using the Trefle® device.

Contrast-enhanced computed tomography (CT) revealed a defined 1.5 cm × 1.5 cm mass, which was poorly enhanced in both the early and late phases, at the pancreatic head, dilated common bile duct and upstream main pancreatic duct, as well as masses in both lobes of the liver and both lungs (Figure 1A and B). The patient was diagnosed with obstructive jaundice due to primary pancreatic ductal adenocarcinoma or pancreatic metastasis from colon cancer. Therefore, we planned to perform endoscopic biliary drainage to treat the obstructive jaundice and obtain histopathological evidence. 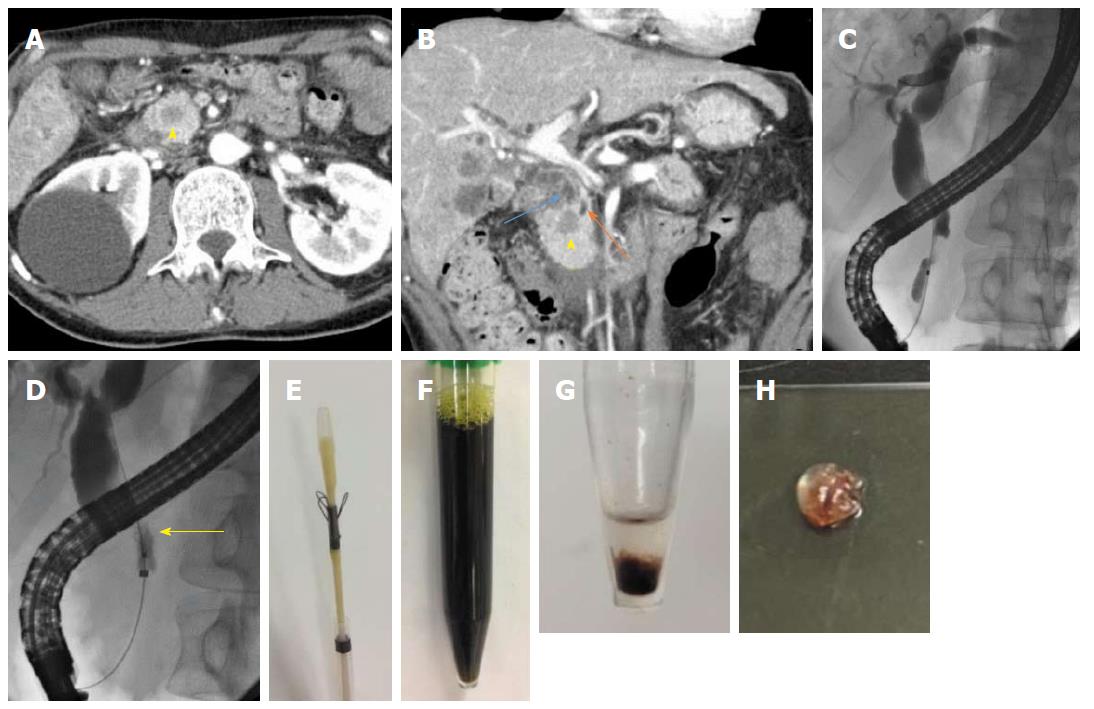 An ERCP demonstrated a biliary stricture of the lower common bile duct approximately 2 cm in length, as well as dilatation of the proximal bile duct (Figure 1C). After performing endoscopic sphincterotomy (EST), the Trefle® device was inserted into the bile duct over the guidewire. Next, the scraping loops of the device were opened and passed through the stricture in the proximal-to-distal direction under fluoroscopic guidance (Figure 1D). All specimens including aspirated bile juice and tissues were transferred to a sterile tube; the scraping loops were cut using scissors (Figure 1E and F). The centrifuged deposit was fixed in formalin overnight. Next, the deposit was washed in saline, mixed with 1% sodium aspartate, and centrifuged again. Finally, the deposit was put a few drop of 1 M calcium chloride and embedded in paraffin, yielding a cell block (Figure 1G and H). The cell block was sectioned for hematoxylin-and-eosin (HE) and immunohistochemical staining. The lesion was confirmed to be moderately differentiated adenocarcinoma, which by immunohistochemical staining was focally positive for cytokeratin 7 (CK 7) and positive for CK 20 and caudal type homeobox 2 (CDX 2). These findings were consistent with those of previous resected specimens, confirming the final diagnosis of pancreatic metastasis from colon cancer (Figure 2).

Figure 2 Histological findings. Immunohistochemical staining revealed that cancer cells in cell block specimens obtained using the Trefle® device were focally positive for cytokeratin 7 (CK 7), and positive for CK 20 and caudal type homeobox 2 (CDX 2). These findings were consistent with those of rectal resection specimens.

A covered self-expanding metal stent (SEMS) was inserted to resolve the symptoms and establish biliary drainage. The third-line chemotherapy regimen, FOLFIRI plus ramucirumab, was administered based on the results of immunohistochemical examination, and the patient is alive at the time of writing. The combination of the cell-block technique and the Trefle® device was useful for making decisions regarding management of this patient.

This case demonstrated contrast-enhanced CT findings compatible with typical pancreatic ductal adenocarcinoma with hypovascular tumor and a dilated upstream main pancreatic duct. In this case, differential diagnosis of pancreatic metastasis of colon cancer was necessary, because the patient had a medical history of colon cancer with distant metastasis. However, pancreatic metastasis from colon cancer is rare in clinical practice. Pancreatic metastases from non-pancreatic primary tumors are rare, accounting for approximately 2% of all pancreatic neoplasms[10], and arise most commonly from primary tumors of the kidney, lung, breast, and colon. Immunohistochemistry is essential for identifying the primary site of metastatic neoplasms using molecular markers. Determination of CK 7, CK 20, and CDX 2 expression is useful for distinguishing colon cancer. CK 7 is expressed by various cancers, including that of the pancreas, but not the gastrointestinal tract. In contrast, CK 20 is expressed by most gastrointestinal tumors-including primary colonic, pancreatic, and gastric cancers, but is non-specific. CDX 2 is also expressed by colon adenocarcinoma, but at very low levels in most gastric and pancreatic tumors[11-13]. Biopsy specimens are generally required for immunohistochemical analysis; cytology specimens are unsuitable for this purpose. However, the cell block method is appropriate for immunohistochemical analysis. Use of sodium aspartate as a fixative increases the cellularity, increasing morphological detail and improving the diagnostic sensitivity. The cell block method can also generate multiple sections for staining and immunohistochemistry[14]. The efficacy of cell block method has been reported in the bile duct cytology and endoscopic ultrasound-guided fine needle aspiration of pancreas and gastrointestinal solid neoplastic lesions[7-9].

The amount of tissue collected from the biliary tract by brush cytology is insufficient for immunohistochemical analysis, despite the need for immunohistochemical analysis to diagnose various diseases of the biliary tract, such as IgG4-SC or metastasis from cancer in other organs. Although endoscopic transpapillary forceps biopsy can be performed to obtain larger tissue samples, its success is dependent on operator skill because it is technically more difficult than brush cytology. Hence, alternative techniques that yield tissue samples of adequate size are required. In this case, we used the Trefle® endoscopic device, which has been demonstrated to be superior to forceps biopsy in terms of histologic/cytologic sample yield (93.5% vs 83.7%) and cancer detection (64.7% vs 51.3%)[5]. Specimens obtained using the Trefle® device are divided into tissue and fluid components for histological and cytological analyses, respectively. However, distinguishing chunks of tissue is hampered by the opacity of the surrounding fluid. In addition, some tissue may remain in the fluid component. Therefore, a simpler and more efficient specimen-processing method is needed. We typically subject specimens obtained using the Trefle® device to the cell block method to enable differentiation of benign and malignant lesions, as well as immunohistochemical examination. In the case presented herein, the cell block method with the Trefle® device facilitated differential diagnosis of a biliary stricture. Further studies involving larger populations are needed to confirm the efficacy of this method.

The patient underwent resection for rectal adenocarcinoma presented metastases to the liver and lung with epigastric pain and jaundice.

The patient was diagnosed with obstructive jaundice.

The patient was diagnosed with obstructive jaundice due to primary pancreatic ductal adenocarcinoma.

Immunohistochemical findings of the cell block sections obtained using the Trefle® endoscopic scraper were consistent with those of previous resected specimens, confirming the final diagnosis of pancreatic metastasis from colon cancer.

A covered self-expanding metal stent was inserted to resolve the symptoms and establish biliary drainage and the third-line chemotherapy regimen for colon cancer was administered.

There have been few reports dealing with the combination of a scraper Trefle® and cell block method for histocytological diagnosis of malignant biliary strictures.

The combination of the cell block technique and the Trefle® device shows promise for diagnosis of biliary strictures as it is as easy as conventional brush cytology.