Leptomeningeal carcinomatosis is a very rare manifestation in patients diagnosed with esophagogastric junction and gastric cancer. Its prognosis is ominous and therapy outcomes are disappointing. Herein, we present two patients; one initially diagnosed with gastric cancer and leptomeningeal carcinomatosis but no other evidence of metastatic disease and the other one initially diagnosed with esophagogastric junction cancer, who recurred solitary with leptomeningeal seedings several years after the initial diagnosis and treatment. Furthermore, a thorough and short review of the literature is carried out.

Core tip: Leptomeningeal carcinomatosis (LMC) is related with ominous prognosis and the median survival varies between a few weeks to months. Even LMC is extremely rare in patients diagnosed with esophagogastric junction and gastric cancer, physicians should be alerted when neurological symptoms occurred, are persistent and could not be explained. A single diagnosis test procedure itself is not absolutely sensitive and the investigation algorithm may comprise a gadolinium enhanced brain magnetic resonance imaging and cerebrospinal fluid cytology tests.

Esophagogastric junction (EGJ) and gastric cancer (GC) constitute a major health issue worldwide and are often diagnosed in advanced stage with dismal prognosis[1]. Leptomeningeal carcinomatosis (LMC) is defined as cancerous infiltration of the arachnoid membrane and the pia mater with devastating prognosis. Several routes of spread to meninges have been suggested; direct infiltration from bone metastases, via arteries and lymphatics, perineural and perivascular spaces, retrograde flow of Batson’s venous plexus[2]. Among cancer patients, it is most often related to breast and lung tumors, melanoma, leukemia and lymphoma[3]. Only a few cases of EGJC and GC patients have been reported with LMC as an upfront disease manifestation. Most of the cases are presented several months or years after the initial diagnosis with synchronous diffuse disease spread. It is reported a 0.16%-0.69% of GC cases with LMC diagnosis, meanwhile it is clinically diagnosed in 2%-4% of all cancer patients[4,5]. Herein, we present two patients with LMC and primary site diagnosis of EGJ and GC, respectively (Table 1).

A 64-year-old female was referred to our Centre in September 2015. Her disease symptoms started almost 3 wk before with severe episodes of headache, dizziness visual and hearing loss (mainly right). From her past medical and family history nothing important to be mentioned. Initially, she was investigated by a computed tomography (CT) brain scan (Figure 1A) with no evidence of suspicious findings and pain killers were administrated with no benefit. Afterwards, steroids were administrated empirically with initial improvement of symptoms for a few days. Due to deterioration, further investigation by brain magnetic resonance imaging (MRI) revealed diffuse meningeal enhancement (Figure 1B). It was extended also into the internal auditory canal and optic nerves sheaths more into the right side. CT chest, abdomen, pelvis scans revealed only thickness in the area of gastric cardia and further investigation by an upper GI endoscopy confirmed the diagnosis of a poorly differentiated gastric adenocarcinoma with signet ring features (Figure 2). Cerebrospinal fluid cytology (CSF) confirmed the diagnosis of LMC (Figure 3). Full blood count and biochemistry tests were within normal values and tumor markers’ evaluation revealed CEA = 33.3 ng/mL. Her clinical status deteriorated rapidly, was in coma, and the other day of IT with Methotrexate (MTX, 12.5 mg) the patient died, approximately within 4 wk after the initial onset of disease symptoms. 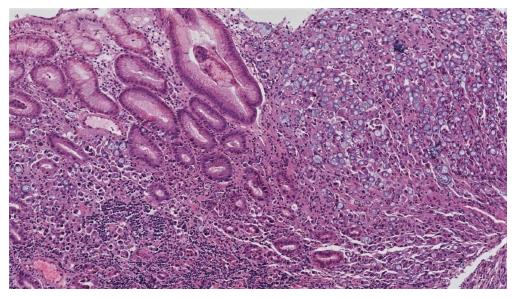 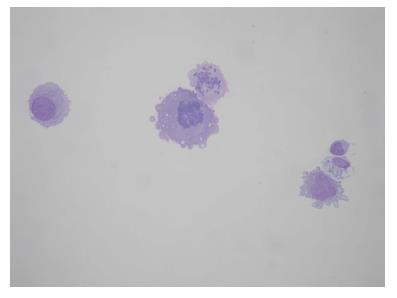 A 51-year-old man was diagnosed with an EGJ poorly differentiated adenocarcinoma (cT3N+, M0) in July 2009. He was therefore commenced on peri-operative chemotherapy with epirubicin, cisplatin and capecitabine regimen and on 02/11/2009 he was operated (Ivor-Lewis gastrectomy, ypT2N1, R0, gr III adenocarcinoma with signet ring features, Figure 4). He remained disease-free until September 2015 when he experienced neurological symptoms such as dysphasia, headaches and temporary left side paresis. Initially, investigations by CT brain (Figure 5A), chest, abdomen, pelvis scans revealed no evidence of disease. Subsequently, a brain MRI scan revealed findings of LMC (Figure 5B). A CSF cytology investigation confirmed the diagnosis consistent with GC origin (Figure 6), meanwhile a flow cytometric test confirmed the presence of a non hematopoietic cell population. Full blood count and biochemistry tests were within normal values and tumor markers’ evaluation revealed CEA = 6.3 ng/mL, CA 19-9 = 98.1 μg/mL. He was treated with intrathecal MTX (12.5 mg) twice-weekly with relatively good clinical response initially. After three weeks of treatment he was put on “maintenance” application once weekly, but unfortunately his performance status was rapidly deteriorated after a couple of weeks. Therefore, his treatment was changed to MTX, Cytosine Arabinoside (40 mg) and Dexamethasone (4 mg). He received 3 and 5 applications with good clinical response, in October and in December 2009, respectively. Afterwards, the CT chest-abdomen-pelvis re-staging scans revealed no clear evidence of local recurrence or metastatic disease, meanwhile the MRI brain performed revealed slight improvement of meningeal enhancement. In July 2016, his performance status deteriorated with severe episodes of headaches, dizziness, dysphasia, visual and hearing loss and consciousness deduction. He was re-challenged with IT but with modest improvement and died in September 2016. 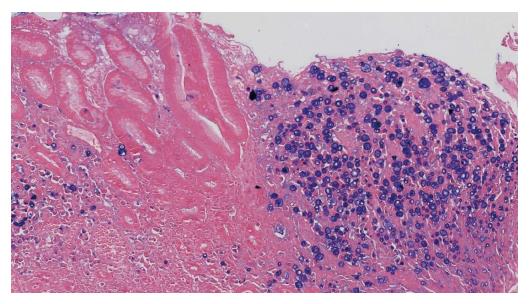 Figure 4 Patient No. 2. Alcian blue highlights difference in mucin production between cancer cells (blue) and normal gastric tissue (no presence), helping us also determine about the extent of the infiltration (Alcian blue 200 ×).

Leptomeningeal carcinomatosis is often presented with non specific clinical symptoms like headache, nausea and vomiting. Supratentorial involvement could cause altered mental and personality status, dysphasia and seizures. When infratentorial lesions occurred, they are mainly presented with cranial nerve palsies and related symptoms[6,7]. The gadolinium enhanced MRI and CSF are the main investigation procedures. The sensitivity and specificity of the brain MRI are 66%-76% and 75%-77%, respectively, but could be almost two times higher than those of the CT[8-10]. Approximately in 67% of cases imaging studies reveal findings such as focal or diffuse abnormal meningeal enhancement and nodules detection[11]. Moreover, meningeal enhancement is suggestive but does not confirm the diagnosis. Infection or inflammatory causes, intracranial hypertension but even a lumbar puncture procedure before MRI scan could induce diffuse meningeal enhancement for a period of weeks to months and give false positive results[12]. After first sampling of CSF examination the possibility of a positive result is approximately 54%. This raises to 91% after multiple cytology investigations[6]. On the contrary, a negative cytology investigation after three lumbar punctures does not rule out the diagnosis of LMC in the context of other positive tests, like an MRI with characteristic findings.

Reviewing the literature, it is obvious that this is a rare manifestation. In a retrospective analysis of medical records from Memorial Sloan-Kettering Cancer Center of consecutive 90 patients with LMC treated from 1975 to 1981, none was diagnosed with EGC/GC[6]. From MD Anderson cancer Center, between 1985 to 2001 in more than 1500 EGC/GC patients, eight cases with leptomeningeal seedings were identified[13]. Furthermore, in a Korean retrospective multicenter analysis conducted between 1995 to 2007, 54 patients were identified with LMC from a total 22154 GC patients[14].

There is no doubt that LMC is related with ominous prognosis. Treatment goals initially focus to improvement of neurological symptoms and quality of life and secondarily to prolongation of survival. In the meantime, median survival varies between a few weeks to months. Current treatment approaches may be IT, systemic therapy and or cranio-spinal radiation therapy (RT) but the results of these approaches are disappointing and a lot of times confusing and conflicting. There are no robust data from multicenter prospective studies to support the superiority of IT vs best supportive care. A study compared MTX/ Ara-C/hydrocortisone combination vs single agent MTX. Primary sites were the lung (n = 33), breast (n = 13) and stomach (n = 5). Superiority was revealed for the combination arm for median overall survival (18.6 vs 10.4 wk, P = 0.02) and cytology negative conversion (38.5% vs 13 %, P = 0.03), respectively[15].

Moreover, a prospective study provided no benefit of IT added to systemic treatment and RT. The first group consisted of 54 patients treated with RT, IT and systemic therapy vs 50 patients treated with RT and systemic chemotherapy. There was no differences in median survival (4 mo) and long term survivors[16]. It should be underlined, that in both groups approximately 60% of patients were diagnosed with breast cancer, 15% with lung cancer and the other 25% with various other types of cancer (the percentage of EGJC/GC cases is not clarified, if any). It should be also stated that the aforementioned studies reviewed, reflect various solid tumors with highly variable prognosis, including breast cancer which has a more indolent history, and the regimens of IT chemotherapy and RT administrated are not distinguished based on the various types of solid tumors.

In addition, a multicenter retrospective analysis of patients with GC and LMC revealed no evidence of an additional effect of cranio-spinal RT to IT[14]. Due to the fact that in most cases blood brain barrier is destroyed and LMC is related with highly permeable blood vessels in vascularized tumors, it could be also speculated that systemic therapy may be effective. An experimental model supports this hypothesis[17].

In conclusion, even LMC is rare in patients diagnosed with EGJC and GC, physicians should be alerted when neurological symptoms occurred, are persistent and could not be explained. Furthermore, a single diagnosis test procedure itself is not absolutely sensitive and the investigation algorithm should comprise a gadolinium enhanced brain MRI and repeated CSF cytology tests. Unfortunately, disease prognosis is dismal and newly developed targeted drugs with improved CNS penetration and better outcomes remains a priority.

Two patients are presented. Both of them were presented with severe neurological symptoms and their further investigation revealed the initial diagnosis and the recurrence of gastric cancer (GC)/esophagogastric junction cancer (EGJC), respectively.

Meningeal enhancement is suggestive but does not confirm the diagnosis. Infection or inflammatory causes, intracranial hypertension but even a lumbar puncture procedure before magnetic resonance imaging (MRI) scan could induce diffuse meningeal enhancement give false positive results.

CSF cytology confirmed the diagnosis of LMC in both patients.

Only a few cases of EGJC and GC patients have been reported with LMC as an upfront disease manifestation or as solitary disease recurrence.

Even LMC is extremely rare in patients diagnosed with EGJC and GC, physicians should be alerted when neurological symptoms occurred, are persistent and could not be explained.