AIM: To evaluate the value of 18F-fluorodeoxyglucose positron emission tomography/computed tomography (18F-FDG PET/CT) in the restaging of resected rectal cancer.

METHODS: From January 2007 to Sep 2008, 21 patients who had undergone curative surgery resection for rectal carcinoma with suspicious relapse in conventional imaging or clinical findings were retrospectively enrolled in our study. The patients underwent 28 PET/CT scans (two patients had two scans, one patient had three and one had four scans). Locoregional recurrences and/or distant metastases were confirmed by histological analysis or clinical and imaging follow-up.

CONCLUSION: 18F-FDG PET/CT is useful for evaluating suspicious locoregional recurrence and distant metastases in the restaging of rectal cancer after curative resection.

Rectal cancer is one of the most common malignancies in the United States and one of the most frequent causes of cancer-related death[1]. The incidence of rectal cancer is rapidly increasing with changes in life styles and diets and is thus an emerging health issue in the Asian region, including Korea, Japan and China[2,3]. Over the past decade, significant progress has been made in the treatment of localized rectal cancer by advances in surgery, radiotherapy, and chemotherapy. However, distant metastasis and local recurrence continues to be a major problem following treatment of rectal cancer, and carries an extremely poor prognosis[4,5]. More importantly, distant metastasis and locoregional recurrence are seldom curable and produce debilitating symptoms that are difficult to palliate.

Endoscopic examination, conventional computed tomography (CT), and magnetic resonance imaging (MRI) are the main techniques used to follow-up of resected rectal cancer[6,7]. However, these techniques may be not reliable for detecting local recurrence and distant metastasis[8]. The reported increase in sensitivity of 18F-fluorodeoxyglucose positron emission tomography/computed tomography (18F-FDG PET/CT) over CT and MRI has been attributed to the ability of 18F-FDG PET to detect metabolic abnormalities that precede the morphological changes seen by CT[9]. The whole body imaging of the 18F-FDG PET/CT study also contributes to the increased sensitivity through detection of distant metastatic lesions[10]. This study was undertaken to further define the utility of 18F-FDG PET/CT imaging in evaluating suspicious locoregional recurrence and distant metastases in the restaging of resected rectal cancer.

In the period from January 2007 to July 2008, 21 patients (14 males and 7 female; age range, 27-78 years; mean age, 58.3 years), who had undergone curative surgery resection for rectal carcinoma and who had suspicious local recurrence and/or distant metastasis in conventional imaging or clinical findings, were retrospectively enrolled in our study. Twenty-one patients underwent 28 PET/CT scans (2 patients had two scans, one patient had three scans and one patient had four scans). The standard of reference for tumor recurrence consisted of histopathological confirmation or clinical and imaging follow-up information for at least 11 mo after PET/CT examinations.

The patients were asked to fast for at least four hours before undergoing 18F-FDG PET/CT to ensure that their blood glucose level was within the normal range (70-120 mg/dL) prior to intravenous injection of 18F-FDG. The patients received an intravenous injection of 370-666 MBq (10-18 mCi) of 18F-FDG. Data acquisition by an integrated PET/CT system (Discovery STE; GE Medical Systems, Milwaukee, WI, USA) was performed within 60 min after injection. The procedure of data acquisition was as follows: CT scanning was performed first, from the head to the pelvic floor, with 110 kV, 110 mA, a tube rotation time of 0.5 s, a 3.3-mm section thickness, which was matched to the PET section thickness. Immediately after CT scanning, a PET emission scan that covered the identical transverse field of view was obtained. Acquisition time was three minutes per table position. PET image data sets were reconstructed iteratively by applying the CT data for attenuation correction, and coregistered images were displayed on a workstation.

Reviewer 1 and reviewer 2, who were aware of other clinical or imaging information, read the 18F-FDG PET/CT images on a high-resolution computer screen. The reviewers reached a consensus in cases of discrepancy. Reviewer 1 had 20 years of experience in both nuclear medicine and radiology, and reviewer 2 had 5 years of experience in both nuclear medicine and radiology. On the basis of knowledge of the normal biodistribution of 18F-FDG, lesions were identified as foci with increased tracer accumulation relative to that in comparable normal contralateral structures and surrounding soft tissues. The lesions were qualitatively graded as definitely or probably abnormal (categorized as representing a tumor) if the accumulation of 18F-FDG was markedly to moderately increased. Diffuse mildly increased activity or no increased activity (in the case of an abnormality identified on CT for which no corresponding abnormality was present on PET) was considered to be normal or benign disease. 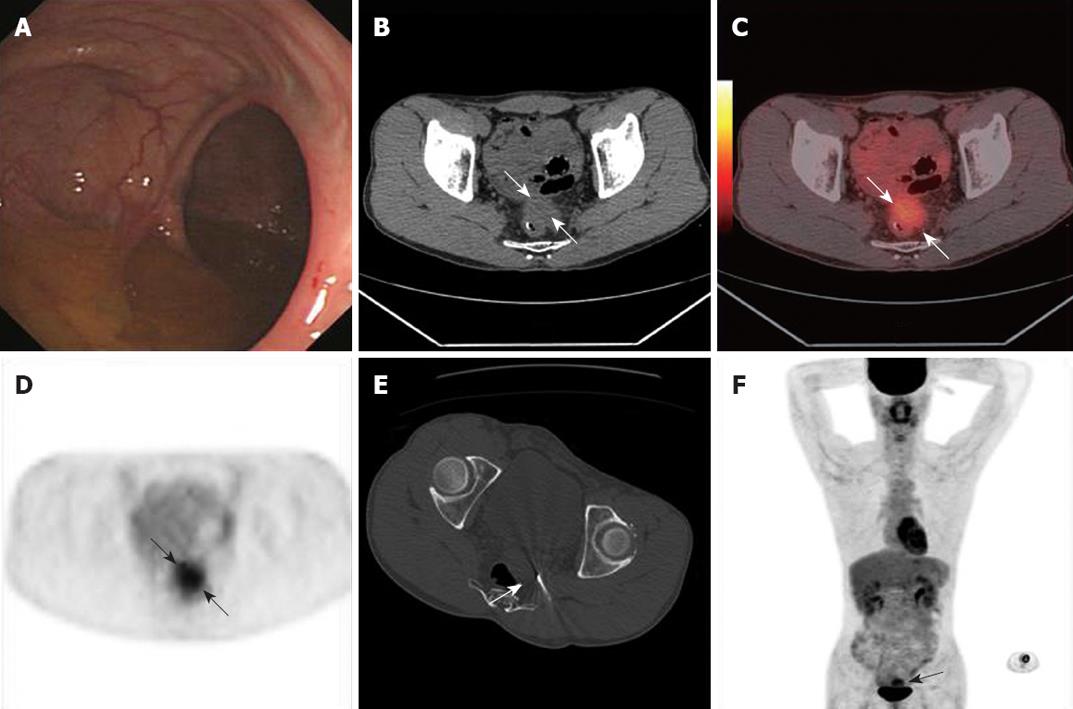 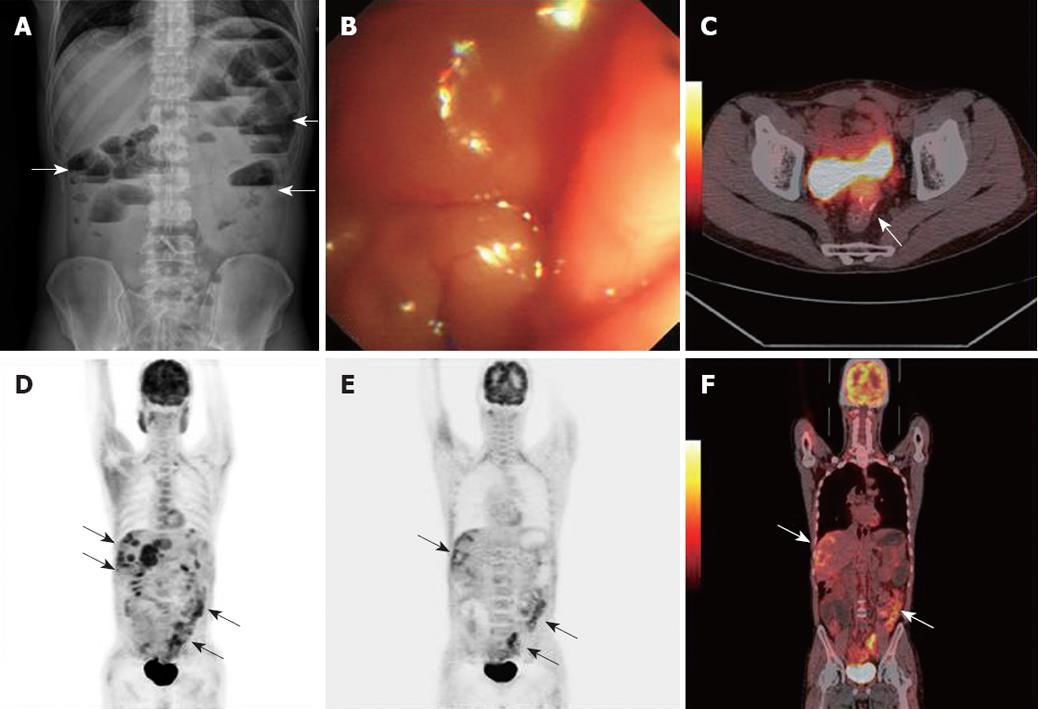 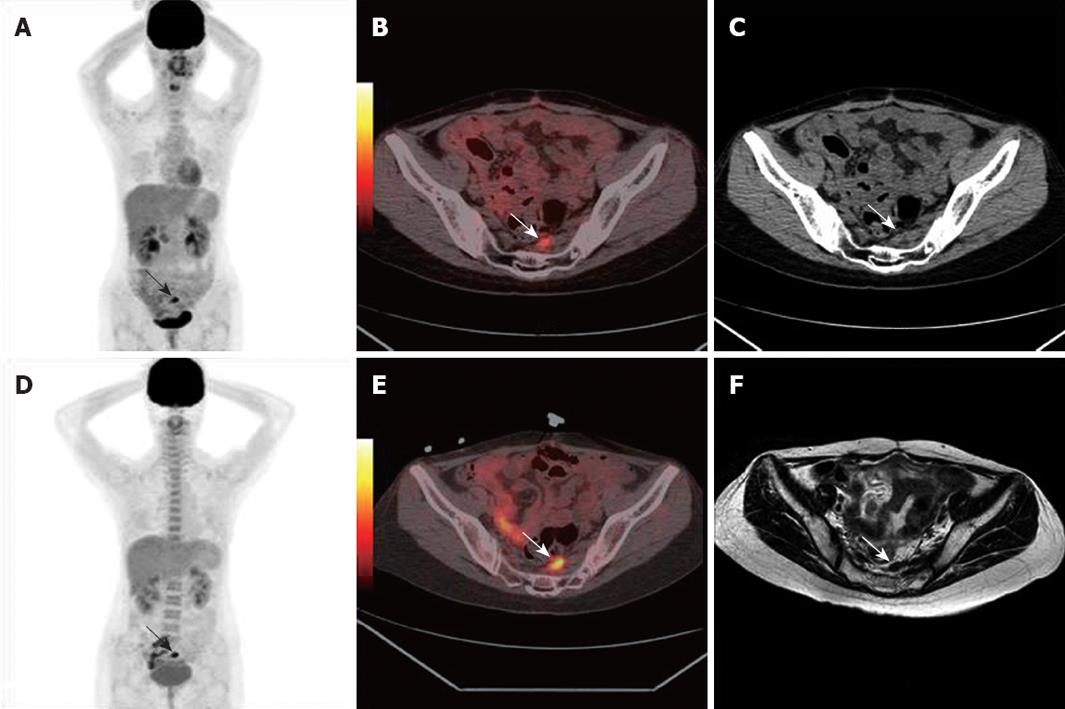 Surgical resection of pulmonary metastases was performed for potentially curative treatment in three patients who had previously undergone resection for rectal carcinoma with a single and peripheral new lung lesion identified by whole body 18F-FDG PET/CT. A one-year follow-up period of the three patients revealed that two of the patients were in good condition and new lung lesion had appeared in one patient five months after the resection of lung metastases. 18F-FDG PET/CT image also was also used to monitor salvage chemotherapy in four patients after two cycles of treatment and revealed the early response to the treatment in these patients (Figure 4). 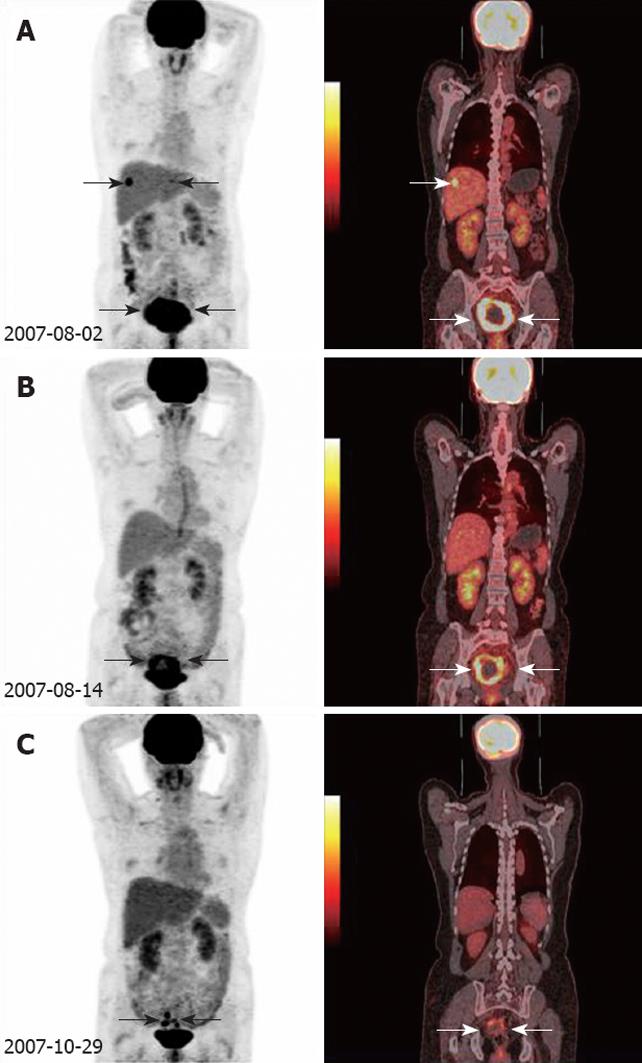 Five patients who suffered from perirectal recurrence and endoscopic examination of whom failed to get samples for histopathological diagnosis, underwent CT guided tissue core biopsy modulated with 18F-FDG PET/CT imaging (Figure 1). 18F-FDG PET/CT scan and biopsy procedure were completed in each patient with the same PET/CT system on a single day. These patients avoided exploratory laparotomy to obtain samples for histopathological evidence of recurrence.

The current treatment strategy for rectal cancer aims detecting locoregional recurrence early by conventional medical modalities. Endoscopic examination is not always useful in such cases, because local recurrence of rectal cancer is often perirectal[20]. In our study, 10 patients had accepted endoscopic examinations one month before 18F-FDG PET/CT scan, which only revealed two suspicious locoregional recurrences. Conventional CT and MRI are also not reliable for detecting local recurrence in some clinical situations, because benign postoperative scar tissue can produce a mass that mimics recurrence[21,22]. Conventional anatomical methods for tumor detection might not accurately distinguish benign and malignant processes based on size criteria alone, and interpretation might be difficult when prior surgery or radiation therapy results in distortion of the normal anatomy[23]. In the current study, 15 patients underwent locoregional CT or MRI scan one month before the 18F-FDG PET/CT scan, which only revealed seven patients with suspicious local recurrences or distant metastases.

Salvage treatment for the relapse of rectal cancer consisted of radiotherapy alone or combined with chemotherapy and/or surgical resection[27]. Note that 18F-FDG PET/CT could be the best criterion for choosing individual salvage treatment plans[28,29]. Resections are effective for some patients with hepatic or pulmonary metastases of colorectal cancer, but the best selection criteria for resections and the effective treatment for recurrence after the resections have not been determined[30]. However, identifying candidates for this aggressive surgical approach is controversial, because the tumor and host factors that allow systemic disease to be controlled with local therapy are unknown[31]. 18F-FDG PET/CT provides important additional information in patients with presumed resectable colorectal metastases to the liver, leading to a change of therapy in one fifth of patients[32,33].

In our study, surgical resection of pulmonary metastases was used in three patients who had previously undergone resection for rectal carcinoma with a single and peripheral new lung lesion identified by whole body PET/CT. A one-year follow-up period revealed that two of the patients were in a good condition but that a new lung lesion had appeared in the third patient five months after the resection of lung metastases. 18F-FDG PET/CT image was used to guide chemotherapy and radiotherapy in four patients who suffered pelvic recurrence and extrapelvic metastases. Our data, although in a limited series of patients with a relatively short follow-up, showed that the use of whole body PET/CT scan will be helpful for making salvage treatment plans.

Five patients suffered from perirectal recurrence and endoscopic examination failed to get samples for histopathological diagnosis. In such clinical conditions, minimally invasive image-guided biopsy might be the first choice. CT guided biopsy is the most common technique for pathological diagnosis[34]. CT guidance is favorable in small lesions, has reliable three-dimensional control of the biopsy needle path, and, with contrast enhancement, CT can allow discrimination of lesions and vital anatomic vascular and neural structures. However, CT may not accurately distinguish benign postoperative scar tissue and local recurrence based on anatomical characters alone[35]. We performed CT guided tissue core biopsy modulated with 18F-FDG PET/CT imaging in five patients, which might have improved the diagnostic ability of PET/CT, especially when a definite diagnosis was difficult to make. This diagnostic algorithm has the possibility to complete diagnosis and staging of malignant solid tumors in one day.

Our study had several limitations. The first was our small sample size, which might have limited the statistical significance of the results. Due to the retrospective nature of the study, we did not get all of the medical details for some of the patients. There are also some disadvantages associated with PET/CT imaging[36,37]. For example, small tumors might go undetected because partial-volume effects result in a falsely low measurement of true 18F-FDG activity. Another drawback of PET/CT is that 18F-FDG frequently accumulates in areas of inflammation. In our study, the two false positive PET/CT results were inflammation of retroperitoneal abscess and anastomotic granulation tissue, respectively. Physiological variants and benign pathological causes of 18F-FDG uptake can be specifically recognized and properly categorized in other instances.

It is possible that 18F-FDG PET/CT scanning can make a valuable contribution in the detection of locoregional recurrence and distant metastases after rectal cancer resection. The use of 18F-FDG PET/CT might assist the clinician in several ways: such as by guiding surgical resection of hepatic or pulmonary metastases; by improving treatment plans for salvage chemotherapy and radiotherapy; by monitoring the early response to salvage treatment; and by guiding biopsies of suspicious lesions on CT and endoscopic examinations. Our results support the routine use of 18F-FDG PET/CT to evaluate suspicious locoregional recurrence and distant metastases in the restaging of rectal cancer after curative resection.

The paper tries to evaluate the value of 18F-fluorodeoxyglucose positron emission tomography/computed tomography (18F-FDG PET/CT) in the restaging of resected rectal cancer. They report an accuracy of 18F-FDG PET/CT of 90.5%, a negative predictive value of 100% and a positive predictive value of 89.5%, when used in patients with rectal cancer to evaluate locoregional recurrence. They conclude that 18F-FDG PET/CT is useful as a routine technique to evaluate suspicious locoregional recurrence and distant metastases in the restaging of rectal cancer after curative resection. The study was well designed and performed and appropriate methods were used, however, some changes would help to improve the manuscript

The authors use 18F-FDG PET/CT in 21 patients. They carried out one scan for all patients and up to four scans for one patient who had undergone curative surgical resection for rectal carcinoma to determine suspicious relapse. They demonstrated the usefulness of this technique to evaluate recurrences and/or distant metastases. Also, they confirmed the results with histological analysis or clinical and imaging follow-up.

This is a powerful technology for tumor visualization, staging and recurrence diagnosis.

This is an interesting article on the application of PET-CT to the study of the relapse after rectal cancer resection. The conclusions are sound and might be of interest for the clinical community.