A number of tumor suppressor and tumor-related genes exhibit promoter hypermethylation with resultant gene silencing in human cancers. The frequencies of methylation differ among genes and genomic regions within CpG islands in different tissue types. Hypermethylation initially occurs at the edge of CpG islands and spreads to the transcription start site before ultimately shutting down gene expression. When the degree of methylation was quantitatively evaluated in neoplastic and non-neoplastic gastric epithelia using DNA microarray analysis, high-level methylation around the transcription start site appeared to be a tumor-specific phenomenon, although multiple tumor suppressor genes became increasingly methylated with patient age in non-neoplastic gastric epithelia. Quantitative analysis of DNA methylation is a promising method for both cancer diagnosis and risk assessment.

DNA methylation is a type of epigenetic modification that introduces 5’-methylcytosine into DNA. It is estimated that approximate 70%-80% of CpG dinucleotides are heavily methylated in human cells[1]. However, CpG islands are protected from methylation, and approximately 60% of human genes are associated with one or more CpG islands[2]. Unmethylated CpG islands may become methylated in cancer cells with resultant loss of gene function[2]. Promoter hypermethylation prevents the binding of methylation-sensitive transcription factors and results in suppression of transcription[3,4]. During gastric carcinogenesis, promoter hypermethylation initially occurs in non-neoplastic gastric epithelia, increases with aging or following exposure to certain environmental factors, such as Helicobacter pylori infection, and ultimately silences gene function to constitute a field defect that may predispose tissues to the development of gastric cancer[5,6]. Many genes become methylated in gastric epithelia[6], although frequencies of methylation depend on which CpG sites within a gene promoter are examined[7]. Quantitative determination of hypermethylation in a particular genomic region in non-neoplastic gastric epithelia may be useful in gastric cancer risk assessment. In this review, the author describes: (1) age-related methylation of tumor suppressor and tumor-related genes, (2) how methylation spreads within promoter CpG islands, and (3) quantitative evaluation of methylation and its possible application for gastric cancer diagnosis and risk assessment.

To clarify the physiological consequences of age-related methylation of tumor suppressor and tumor-related genes, the presence or absence of methylation was evaluated using methylation-specific PCR (MSP) in non-neoplastic gastric epithelia and other non-neoplastic cells of different tissue types obtained at autopsy. Results were compared between patients < 32 years old (n = 11) and patients ≥ 42 years old (n = 27)[6]. Results of this study demonstrated significant differences in susceptibility to age-related methylation among genes in different organs[6]. In non-neoplastic gastric epithelia, methylation was absent in younger individuals, except in promoter 1A of APC (Table 1). Methylation of this promoter is not oncogenic because another APC promoter (promoter 1B) is inherently protected from methylation; therefore, APC cannot be inactivated[8]. Hence, although present in younger individuals, APC methylation at promoter 1A does not contribute to gastric carcinogenesis. Methylation of other tumor suppressor and tumor-related genes was present at variable frequencies in non-neoplastic gastric epithelia from older individuals (Table 1). Methylation of APC, E-cadherin, and DAP-kinase was observed in the majority of samples; methylation of p16 and RUNX3 was found at intermediate frequencies; and methylation of RASSF1A, hMLH1, and GSTP1 was rare or absent (Table 1). Thus, susceptibility to age-related methylation appears to significantly differ among various genes in gastric epithelia, although the frequency of methylation generally increases with age. Differences in methylation frequencies were also noted depending on the site in the stomach from which the sample was acquired. For example, RUNX3 and hMLH1 methylation was more frequent in the lower portion of the stomach (Table 1). The precise reasons for these phenomena are unclear. However, gastric cancer located in the antrum is known to be particularly susceptible to methylation of several tumor suppressor and tumor-related genes[9]. Intestinal metaplasia, particularly that of the incomplete type, commonly arises in the antrum and then expands toward the body of the stomach, and may therefore be predisposed to promoter methylation of these genes. 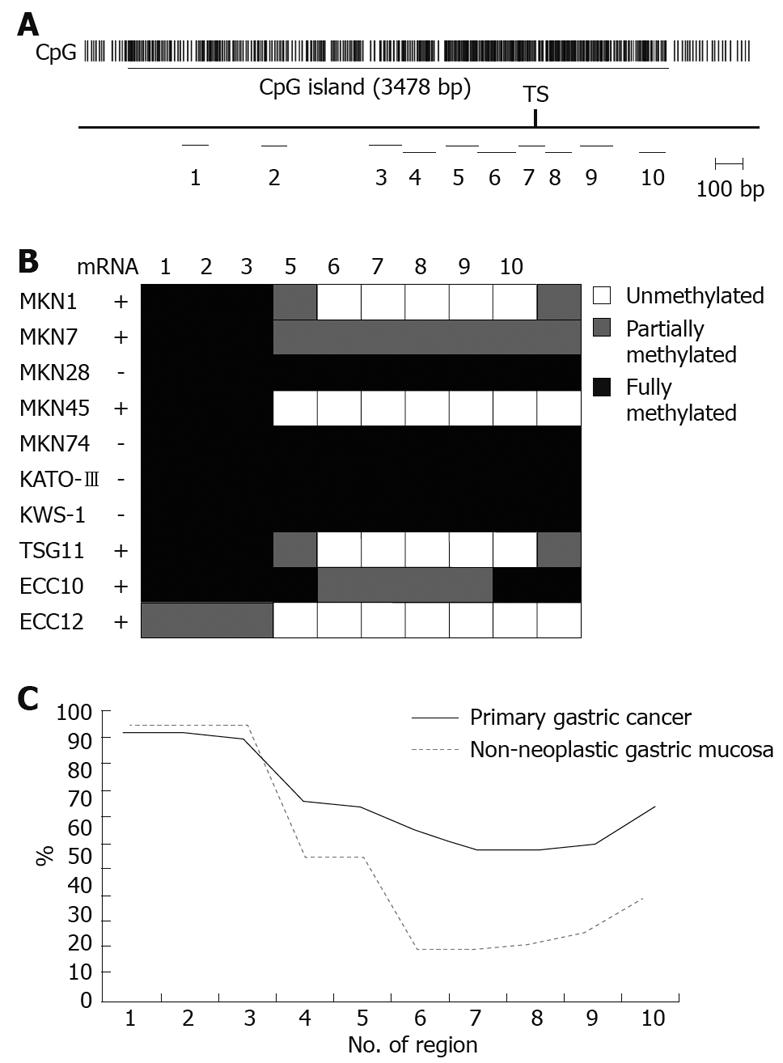 Spreading of methylation and gene silencing

We also studied mRNA expression and methylation status of multiple regions in the RASSF2 CpG island in gastric cancer cell lines, and found that the edge of the CpG island was heavily methylated and that the critical region for gene silencing spans the transcription start site[11]. These results are very similar to the results for RUNX3 described above. Furthermore, results of hypermethylation of multiple regions in the RASSF2 CpG island in primary gastric cancers and corresponding non-neoplastic gastric epithelia were also similar to those of RUNX3[11]. Therefore, these may represent universal gene-silencing phenomena. Hypermethylation initially occurs at the edge of CpG islands and spreads to the transcription start site before ultimately shutting down gene expression (Figure 2). 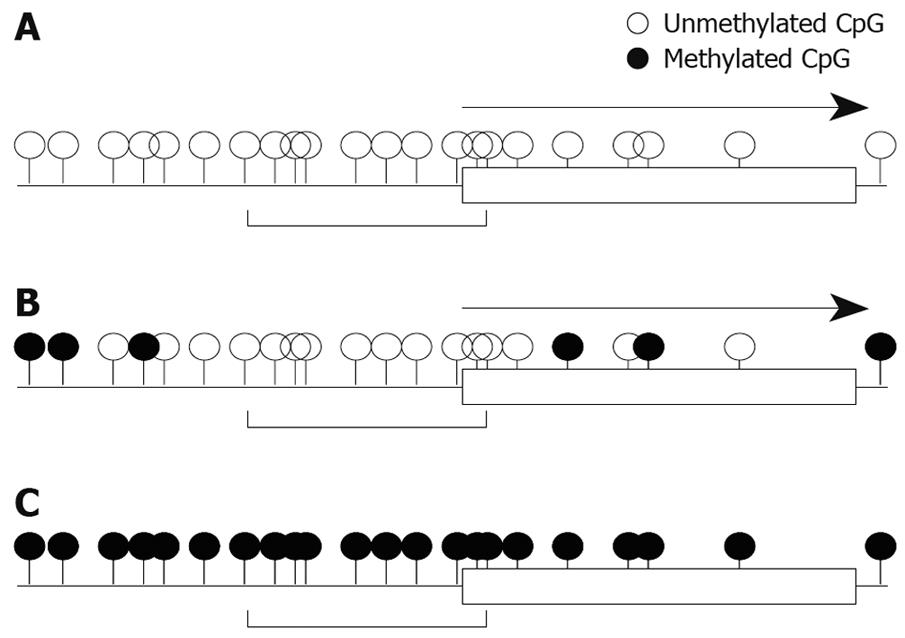 Multiplex PCR for LOX, p16, RUNX3, and TIG1 was performed using primer pairs consisting of one Cy5-end-labeled primer and a phosphate-end-labeled reverse primer. Each primer pair was designed to simultaneously amplify both methylated and unmethylated DNA by precluding internal CpG sequences within the primers themselves (Figure 3). Control DNAs with varying methylation rates (0%, 25%, 50%, 75%, and 100%) were prepared by mixing CpGenome Universal Methylated DNA (completely methylated) and CpGenome Universal Unmethylated DNA (completely unmethylated). PCR products were hybridized to probes on a GenoPal™ microarray (Mitsubishi Rayon Co., Ltd, Tokyo, Japan) in a hybridization chamber (Mitsubishi Rayon Co., Ltd.). The microarray was scanned and the image was captured with a cooled CCD Microarray Image Analyzer (Mitsubishi Rayon Co., Ltd.) (Figure 4)[12]. Standardization curves were obtained based on the ratio of fluorescence intensity of the methylated sequence probe to the total fluorescence intensity of methylated and unmethylated sequence probes (Figure 4)[12]. 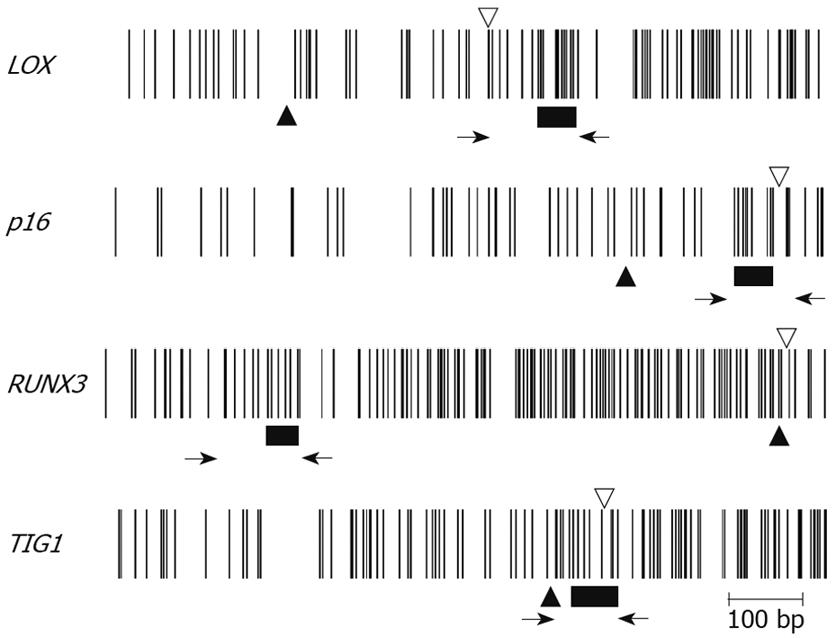 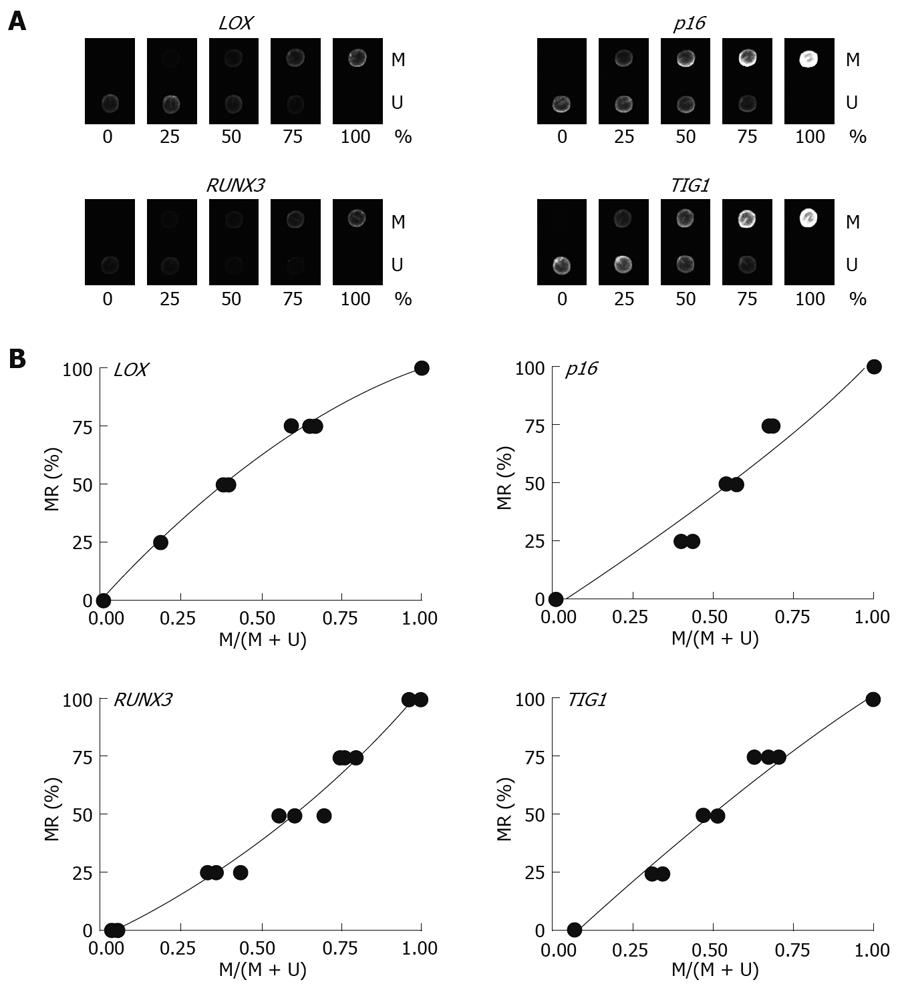 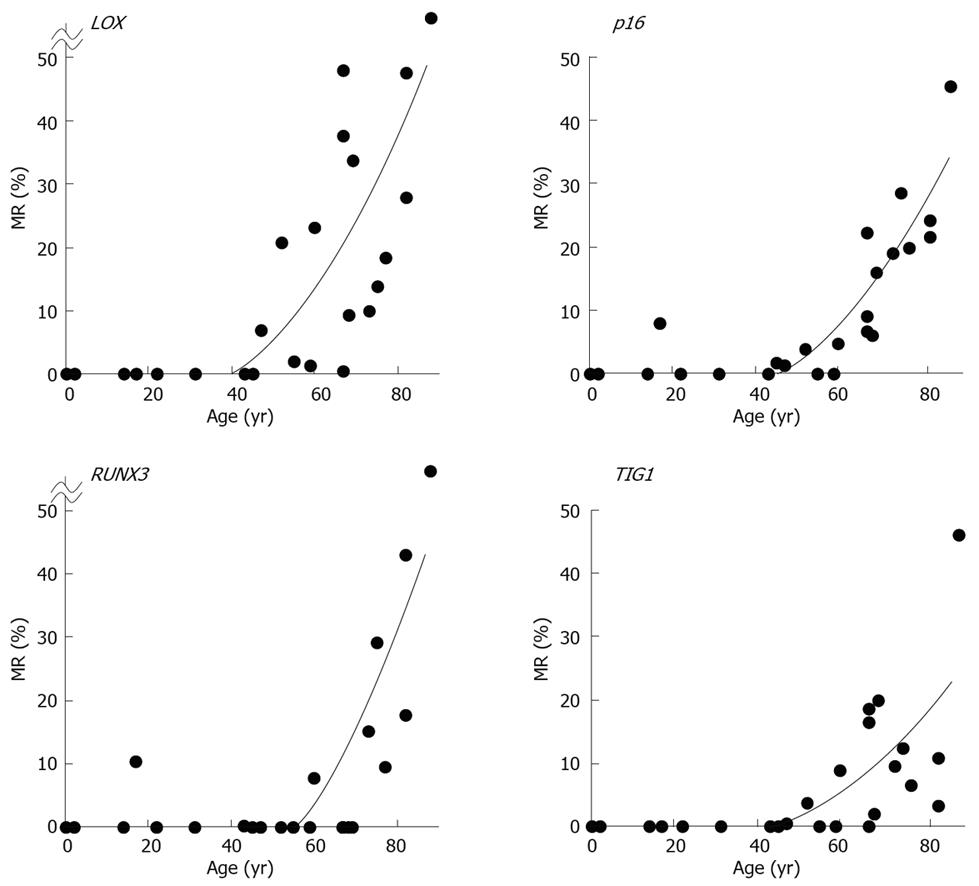 The construction and use of DNA microarrays specific for individual cancer types could ultimately be used to facilitate both cancer diagnosis and risk assessment. An age-matched control study of MRs in non-neoplastic cells or tissues of cancer patients and individuals without cancer should set a new standard for cancer diagnosis and risk assessment.