Mesenteric panniculitis is a chronic illness that is characterized by fibrosing inflammation of the mesenteries that can lead to intractable abdominal pain. Pain control is a crucial component of the management plan. Most patients will improve with oral corticosteroids treatment, however, some patients will require a trial of other immunosuppressive agents, and a minority of patients will continue to have refractory disease. Endoscopic ultrasound guided celiac plexus block is used frequently to control abdominal pain in patients with pancreatic pathology. To our knowledge there are no case reports describing its use in mesenteric panniculitis patients with refractory abdominal pain.

Core tip: Mesenteric panniculitis is a rare disorder that can present with refractory and disabling abdominal pain, we describe a novel intervention using endoscopic ultrasonography guided celiac plexus block to control the refractory abdominal pain in a patient with mesenteric panniculitis. This approach is based on the anatomical supply of the epigastric area where the pain is originating.

The disease usually progresses slowly and may subside spontaneously[7], around 30%-50% of patients are asymptomatic[5]. However, 20% of patients will have more symptomatic debilitating disease[8]. The most common symptom is chronic abdominal pain, some patients may present with acute abdomen[9]. Abdominal pain can be accompanied by other non-specific symptoms including fever, nausea, vomiting, anorexia and non-intentional weight loss[10]. The diagnosis is usually suggested by high resolution computed tomography (CT) scan[11]. Histological confirmation is rarely required[1]. The majority of patients will respond to systemic corticosteroids[8]. However, some patients will require a more intense immunosuppressive therapy like azathioprine or cyclophosphamide. Only a minority of patients will continue to have refractory disease despite immunosuppressive therapy[12]. Other modalities including progesterone, colchicine, tamoxifen, antibiotics and emetine, or radiotherapy have been used in refractory disease with limited success[13,14]. Surgical resection is reserved for the treatment of complication like intestinal obstruction or ischemia[7]. Refractory abdominal pain can be a major source of morbidity in these patients[15].

We report here on a 62-year-old caucasian male who presented with right upper quadrant abdominal pain for several months prior to his first presentation to our institution in 2005. The abdominal pain was not associated with changes in bowel habits, nausea, vomiting, or constitutional symptoms. Initial investigations including complete blood count, liver and kidney function tests, and abdominal ultrasonography were normal. The patient underwent cholecystectomy in 2005 for possible biliary cause of pain, but the pain persisted after surgery. Subsequently, imaging study using CT imaging scan demonstrated thickening and irregularity of the mesentery surrounding the pancreatic head. The radiologic findings were in keeping with the diagnosis of mesenteric panniculitis (Figure 1). Extensive investigations ruled out luminal pathology, pancreatic or adrenal diseases, intermittent porphyria, vascular etiology, and other conditions.

Given the radiologic findings and the patient symptoms, the patient was started on prednisone 40 mg once daily for two months. This was associated with a significant improvement in the severity of abdominal pain. However, prednisone therapy was complicated by severe systemic side effects, including worsening of pre-existing depressive disorder, hypertension and cataracts. For this reason, the patient was subsequently weaned off corticosteroids. He remained symptom free for 6 mo after discontinuation of steroid therapy, and then had recurrence of abdominal pain. Because of the chronicity and severity of the symptoms, the patient underwent diagnostic laparoscopy primarily to rule out malignant process. The operative findings showed thickening of the mesentery with no discrete visible masses. Samples from the thickened mesentery were obtained. The pathology results confirmed the diagnosis of mesenteric panniculitis (Figure 2). The patient was started on a steroid-sparing agent (azathioprine) for 6-mo with no response. Further attempts using 3 to 6 mo courses of tamoxifen and subsequently thalidomide failed to improve his symptoms. Different non-opiate analgesic agents were unsuccessful in controlling his symptoms, including acetaminophen and non-steroidal anti-inflammatory drugs. Eventually the patient was started on opioids (oxycodone and morphine) and a serotonin-norepinephrine reuptake inhibitor for pain control. A follow-up CT imaging of the abdomen showed similar findings. 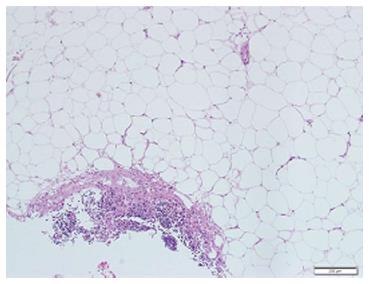 Figure 2 Mesenteric biopsy. Mesenteric biopsy showing fibrotic band of dense collagen infiltrated by mixed inflammatory cells (lymphocytes, plasma cells and neutrophils). There is fat necrosis, no vasculitis or malignancy seen. There is no cellular atypia or lipoblast identified in the biopsy.

After discussion with the patient, the patient was referred for endoscopic ultrasonography (EUS) guided celiac plexus block in an attempt to control relief the intractable abdominal pain and minimize the use of narcotics.

After obtaining consent from the patient, the linear echoendoscope was advanced through the oral cavity into the stomach; the celiac trunk was identified using the ultrasound images (Figure 3). A 19-gauge needle (Echotip; Wilson-Cook) was used to inject 40 mg of Triamcinilone and 10 mL of 0.25% bupivicaine on both sides of the celiac trunk. This protocol is similar to that described by Gress et al[16]. Intravenous crystalloids were administered during the procedure to prevent hypotension caused by the procedure. The patient tolerated the procedure well and was discharged home within few hours. 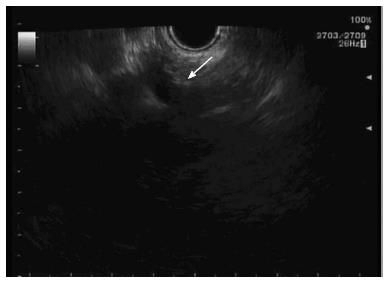 To our knowledge, there are no published reports of applying this unique intervention to control refractory abdominal pain in a patient with mesenteric panniculitis. Mesenteric panniculitis is a rare disorder that is characterized by chronic inflammation leading to fibrosis of the mesentery. Patients’ presentation varies from asymptomatic incidental radiologic findings to severe abdominal pain, vomiting, changes in bowel habits, and constitutional symptoms[17,18]. Associated malignancy is not uncommon, with one report showing that 70% of included patients had radiological findings consistent with malignant disorders[19].

Due to the low incidence of this condition, the prognosis of the disease is not well defined. One report with more than 5 years of follow-up showed that mortality rate approaches 45%, majority of fatalities (50%) were related to co-existing malignancy[20]. Several case reports showed that immunosuppressive medications are effective in controlling disease activity[4,21,22]. However, there are no published reports on the utility of celiac plexus block for controlling refractory symptoms.

Celiac plexus is composed of sympathetic efferent fibres, which are derived from the greater, lesser, and least splanchnic (T5-T12) nerves[23]. The visceral afferent fibres supplying the distal esophagus down to the transverse colon pass through the celiac plexus, before ending in the spinal cord. Therefore, pain originating from pancreatic disease may respond to celiac plexus block. In fact, the most studied application of EUS-guided celiac block is in pancreas-related pain[1,24-26]. The application of this procedure in other disorders is very limited. There are few case reports on the use EUS-guided block in the management of pelvic cancer pain[27], acute intermittent porphyria[28], and pain caused by diabetic gastroparesis[29]. No published literature on the utility of this intervention in patients with mesenteric panniculitis related pain.

Theoretically, pain originating from upper abdominal organs could be alleviated by this procedure. However, this was not tested in clinical trials or observational studies. More research in this area is required in order to ascertain or dispute our observation.

Imaging study using CT scan demonstrated thickening and irregularity of the mesentery surrounding in keeping with the diagnosis of mesenteric panniculitis.

Nicholson et al reported that mesenteric panniculitis in merseyside: a case series and a review of the literature in 2010.

Novel intervention for a rare disease is based on the anatomical supply of the epigastric area where the pain is originating.