Bilioenteric or pancreatoenteric anastomotic strictures often occur after surgery for a pancreaticobiliary disorder. Therapeutic endoscopic retrograde cholangiopancreatography using balloon enteroscopy has been shown to be feasible and effective in patients with such strictures. However, when a benign anastomotic stricture is severe, a dilation catheter cannot pass through the stricture despite successful insertion of the guidewire. We report on the usefulness of the Soehendra Stent Retriever over a guidewire for dilating a severe bilioenteric or pancreatoenteric anastomotic stricture under short double-balloon enteroscopy, in two patients with surgically altered anatomies.

Core tip: The Soehendra Stent Retriever can be useful for the dilation of severe, tight bilioenteric or pancreatoenteric anastomotic strictures over a guidewire, and it is available for endoscopic dilation even under short double-balloon enteroscopy for patients with surgically altered anatomies.

Bilioenteric or pancreatoenteric anastomotic strictures often occur after surgery for a pancreaticobiliary disorder. For the management of these benign strictures in patients with surgically altered anatomies, push enteroscopes and pediatric colonoscopes have been used, but their failure rates have been high. Due to advances in endoscopy, therapeutic endoscopic retrograde cholangiopancreatography (ERCP) including the dilation of a bilioenteric or pancreatoenteric anastomotic stricture by balloon enteroscopy has been shown to be feasible and safe for these patients[1], and has been commonly performed as the initial attempt to manage various postoperative disorder.

However, when a benign anastomotic stricture is severe, a dilation catheter cannot pass through the stricture, and it may not be possible to accomplish dilation despite successful insertion of the guidewire. Here we provide two case reports that involved the use of the Soehendra Stent Retriever (Cook Medical Inc., Winston-Salem, NC, United States), which was designed to facilitate the removal of a biliary or pancreatic plastic stent[2]. We found that this stent retriever was useful for dilating procedures in such difficult situations, in two patients treated with short double-balloon enteroscopy (DBE).

A 66-year-old male had undergone pylorus-preserving pancreatoduodenectomy (PPPD) by modified Child method due to an ampulla of vater adenoma. Three years later, fever and elevated serum transaminase occurred. Regarding the cause of the cholangitis, we suspected a bilioenteric anastomotic stricture because magnetic resonance cholangiopancreatography (MRCP) imaging revealed dilation of the intrahepatic bile ducts.

For the resolution of the cholangitis, we performed endoscopic retrograde cholangiography with short DBE (EC-450BI5; Fujifilm, Tokyo, Japan). When the DBE reached the bilioenteric anastomosis, the benign severe anastomotic stricture, which looked like a pinhole, was revealed (Figure 1A). The cholangiography showed dilated bilateral intrahepatic bile ducts due to the stricture (Figure 1B). For the endoscopic dilation of this stricture, a 0.035-inch angled guidewire was advanced across the stricture, but a tapered 5.5-Fr catheter would not pass the tight stricture. Thus, the catheter was removed, and the guidewire was left in place. A 7-Fr Soehendra Stent Retriever (SSR) was introduced to the anastomosis over the guidewire and turned clockwise carefully with pressure to advance through the stricture into the bile duct (Figure 2A and B). Following this procedure and the removal of the SSR by counter-clockwise rotation, a 5.5-Fr catheter was allowed to pass the stricture (Figure 2C). In addition, an 8-mm dilation balloon catheter passed easily through the stricture, and consequently further dilation was achieved (Figure 2D and E).

Figure 1 Endoscopic view and cholangiography by short double-balloon enteroscopy in a 66-year-old male. A: Bilioenteric anastomotic stricture looking like a pinhole (arrow); B: Dilated bilateral intrahepatic bile ducts were revealed. 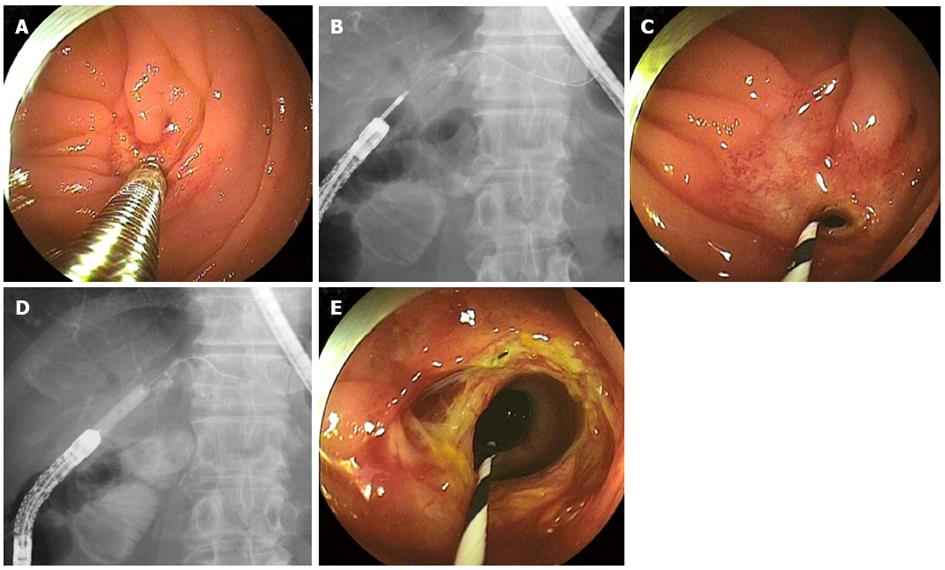 In this case, direct cholangioscopy with an ultraslim enteroscope (EG-530NW; Fujifilm) using overtube guidance was subsequently performed to ascertain whether any hepaticolithiasis existed; none was seen. No relevant complications, such as hemorrhage and perforation, were encountered. No recurrent cholangitis occurred within the 10-month period after the dilation.

A 78-year-old female had undergone PPPD with Roux-en Y reconstruction by modified Child method due to an ampulla of vater adenocarcinoma. One year after the PPPD, she reported abdominal pain and her serum pancreatic enzymes were elevated. Computed tomography imaging showed pancreatitis and marked diffuse dilation of pancreatic duct. Regarding the cause of the pancreatitis, MRCP imaging suggested a pancreatoenteric anastomotic stricture with pancreatic stone.

For resolution of the pancreatitis, endoscopic retrograde pancreatography (ERP) with a short DBE (EC-450BI5) was attempted. Although the anastomosis was cicatricial and obscure, pancreatic juice flowing out slightly from the pinhole-like anastomosis was identified (Figure 3A), and cannulation to the pancreatic duct by a tapered 5.5-Fr catheter was barely achieved with preceding 0.018-inch angled guidewire insertion. The ERP showed a dilated pancreatic duct due to the stricture and pancreatic stone (Figure 3B). For the dilation of this stricture, a 0.035-inch angled guidewire was advanced across the stricture into the pancreatic duct, but a 7-Fr Soehendra Bilialy Dilation Catheter (SBDC) and a balloon dilation catheter whose top was non-tapered could not pass the tight stricture despite several attempts. Therefore, the catheter was removed and the guidewire was left in place. Here the 7-Fr SSR was used in the same manner as that described above for Case 1 (Figure 4A and B). Following this procedure and removal of the SSR, a 7-Fr SBDC and balloon dilation catheter easily passed through the stricture and dilation to 6-mm dia. was obtained (Figure 4C-E).

Figure 3 Endoscopic view and pancreatography by short double-balloon enteroscopy in a 78-year-old female. A: Pancreatoenteric anastomotic stricture looking like a pinhole with pancreatic juice flowing out slightly (arrow); B: Dilated pancreatic duct and pancreatic stone (arrowhead) were revealed. 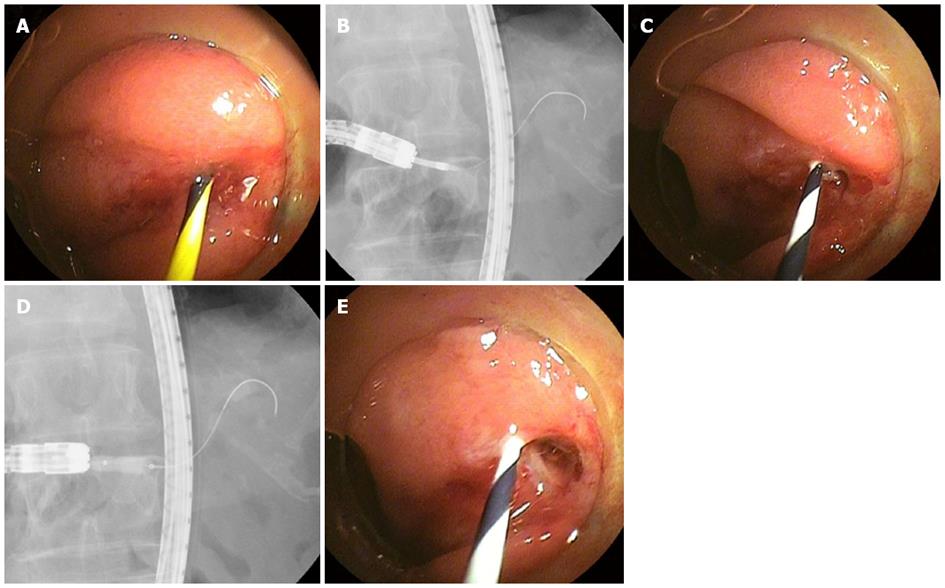 Lastly, 7-Fr × 7-cm Geenen pancreatic stent (Cook Medical) was inserted into the pancreatic duct proximal to the stricture to prevent pancreatic stone impaction. No relevant complications occurred. A follow-up ERP 3 mo later showed improvement in the stricture, and the stone was removed after additional dilation.

As a matter of course, the successful endoscopic management of bilioenteric or pancreatoenteric anastomotic strictures requires the identification of the choledochojejunostomy or pancreaticojejunostomy, the insertion of a guidewire through the narrowed region, and the passage of a dilation catheter through it, followed by balloon dilation. However, anastomoses and the degree of stricture vary. Practically, the anastomosis is sometimes nowhere to be found because of marked stricture, localization at an obscure area, or mucosa-to-mucosa anastomosis, especially in pancreaticojejunostomy. Chahal et al[3] reported that the success rate of cannulation and endoscopic therapy was significantly lower for pancreatic indications (3/37, 8%) than biliary indications (37/44, 84%) due to the above reasons. Therefore, if the guidewire insertion is achieved across a severe stricture, a dilation catheter could somehow be introduced to the bile or pancreatic duct through it. Our results indicate that the SSR was useful in dilating these strictures and subsequently allowing a dilation catheter to pass them to achieve sufficient dilation under a short DBE.

The 7-Fr SSR used in the present cases is a metal device comprised of a 180-cm-long, 7-Fr coiled cable with a 4-mm-long threaded tip of 4- to 6-Fr tapered calibers. The use of the SSR with its “self-tapping” screw design has been described for malignant biliary strictures as well as benign biliary and pancreatic duct strictures, and for the treatment of impacted bile duct stones[4]. In addition, the SSR has been used successfully in many advanced therapeutic applications, including the expansion of mesh holes of metallic stents for bilateral biliary stenting[5] and the dilation of a transduodenal or transgastric fistula for the endoscopic ultrasonography (EUS)-guided biliary or pancreatic pseudocyst drainage[6,7]. In all of these studies, no occurrence of complications was reported. The present report is the first about the use of the SSR for dilating severe bilioenteric or pancreatoenteric anastomotic stricture under a short DBE in two patients with surgically altered anatomies.

In cases in which it is impossible to insert a dilation catheter or guidewire through the stricture using a standard technique (including the use of a variety of tapered catheters and guidewires) due to severe stricture or complete obstruction, there is a report describing a direct incision for a short cicatricial ring at the anastomosis by needle knife[8], but safety considerations indicate the need for further studies of this method. Accordingly, a percutaneous or EUS-guided approach is considerable as an alternative, excluding surgical approaches[9-11]. A rendezvous or antegrade technique is also available by using these approaches. However, the EUS-guided procedure needs advanced expertise, and approaches to the pancreatic duct by these alternatives are especially challenging. In addition, these rendezvous techniques are complicated and require very careful maneuvers. Therefore, the SSR with its ability to stretch and lacerate the tissue bluntly seems to be the device of choice in situations in which a dilation catheter will not pass through a severe anastomotic stricture despite the successful insertion of a guidewire.

In conclusion, the SSR can be useful for the dilation of severe, tight bilioenteric or pancreatoenteric anastomotic strictures over a guidewire, and it is available for endoscopic dilation even under short DBE used for patients with surgically altered anatomies.