Core tip: Malignant peritoneal mesothelioma is a rare aggressive tumor of the peritoneum. We performed laparoscopy which showed specific laparoscopic findings, and the pathological findings of the biopsy specimen led to the diagnosis. This case was associated with umbilical hernia and umbilical metastasis, which is also called as Sister Mary Joseph’s nodule.

A 64-year-old man visited our hospital for further examination of a moderate amount of ascites and multiple peritoneal masses observed during an annual health check. There was nothing noteworthy in his medical history and family history. He had no clear history of asbestos exposure. Physical examination demonstrated moderate abdominal distension with fluctuation and umbilical hernia. Bowel sounds were reduced and there was no abdominal pain or tenderness. Laboratory investigations revealed hypoalbuminemia (35 mg/L), a high level of C-reactive protein (3.5 mg/L), and levels of CEA and CA19-9 were within the normal range. No neoplastic lesions were observed by upper and lower gastrointestinal endoscopy. Abdominal ultrasound showed moderate ascites, irregular thickening of the mesentery and the peritoneum, and numerous nodules present (Figure 1). Contrast enhanced computed tomography showed a moderate amount of ascites and enhanced multiple nodules on the thickened peritoneum and mesenterium (Figure 2). By 18F-fluorodeoxyglucose-positron emission tomography (FDG-PET), mild accumulation of FDG was observed over the entire abdominal region, but no localized strong accumulation suggesting this was the primary lesion (Figure 2C). Aspirated ascites was cloudy and a muddy yellow color with increased cell populations present (7660/μL), most of which were histiocytes (93%) with some mesothelial cells (6%). Protein concentration of the ascites reached levels as high as 41 mg/L, indicating that the ascites was exudative. The hyaluronic acid concentration of the ascites was very high (436000 ng/L). Cytology indicated atypical mesothelial cells. These data strongly suggested malignant peritoneal mesothelioma and therefore, laparoscopy was performed. Laparoscopic observation showed multiple whitish nodules on the peritoneum and the mesenterium including falciform ligament of the liver with a slightly cloudy yellow ascites (Figure 3). Biopsy of the nodular lesions was performed. Additionally, Umbilical hernioplasty was performed owing to avoidance of the risk for incarceration and the pathological assessment of the umbilical region was also done. According to the histopathological findings of the nodular lesion, hematoxylin and eosin (HE) staining showed the infiltration of many tumor cells having acidophilic cytoplasm with large nuclei (Figure 4A). A mucus-like substance in the tumor background was positive by alcian blue staining, and was negative after hyaluronidase treatment, which suggested the presence of accumulated hyaluronic acid. Immunohistochemical stainings of calretinin, D2-40, and CK5/6, which are markers for mesothelial cells, were all positive, while Ber-EP4 and MOC31, which are markers for adenocarcinomas, were negative (Figure 5). Therefore, the final diagnosis was epithelioid type of malignant peritoneal mesothelioma. Umbilical hernia was repaired by surgery and the infiltration of tumor cells into the dermis was observed in the resected specimen of the umbilical region (Figure 4B). 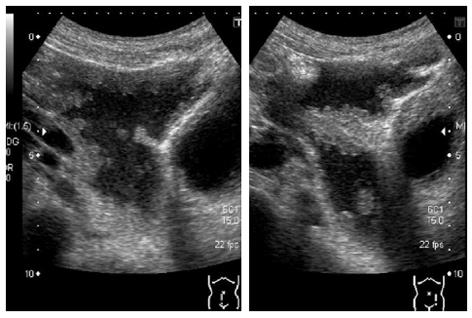 Figure 1 Abdominal ultrasonography. Moderate amount of ascites, irregular thickening of the mesentery and peritoneum, and multiple nodules were observed.

Figure 2 Contrast enhanced computed tomography and 18F-fluorodeoxyglucose-positron emission tomography. A: Thickened peritoneum and mesentery with multiple nodules were positively enhanced by the contrast material; B: An umbilical hernia is also evident (arrow); C: A coronal image of 18F-fluorodeoxyglucose-positron emission tomography (FDG-PET) showed no localized areas of high accumulation of FDG, but mild accumulation of FDG was observed over the entire abdominal region. 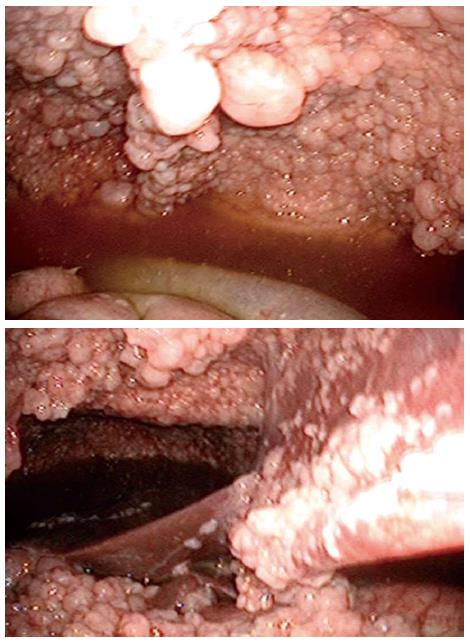 Figure 3 Laparoscopy. Multiple whitish nodules were observed on the peritoneum and the mesenterium including falciform ligament of the liver with slightly muddy yellow ascites. 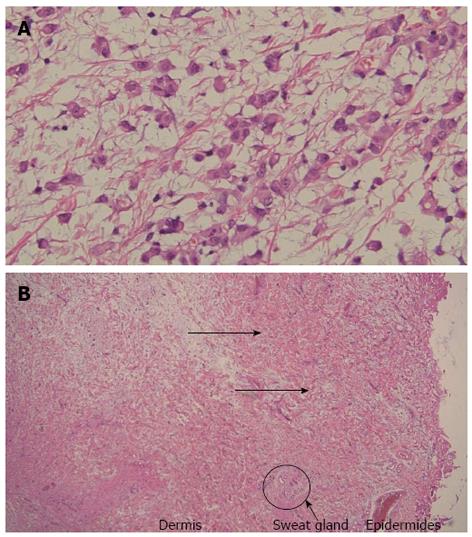 Figure 4 Pathological findings of the nodular lesion and the umbilical region. A: Diffuse infiltration of oval or polygon cells with acidophilic cytoplasm was observed [hematoxylin and eosin (HE), × 200]; B: Histopathology of the umbilical region showed the invasion of tumor cells into the dermis (arrows) (HE, × 40). 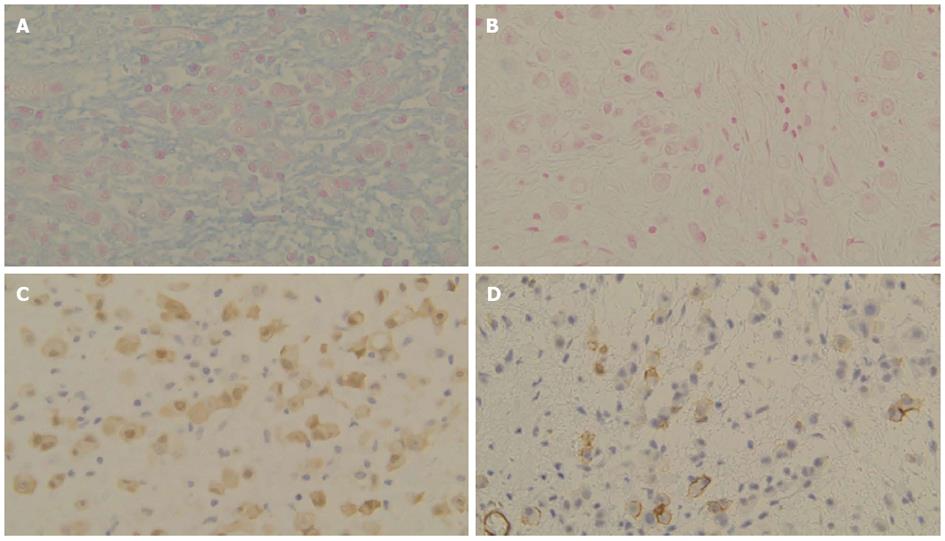 The patient transferred to another hospital of his own will. According to the response mail from the hospital, he received a radical operation in which the peritoneal nodules were removed as much as possible, however, he got debilitated after the surgery which did not permit further chemotherapy. He died 6 mo after the diagnosis due to the progression of the malignancy.

Malignant mesothelioma originates in the pleura, peritoneum, pericardium and tunica vaginalis[1], where a lining of mesothelial cells is present. The main causes of mesothelioma are known to include exposure to asbestos[2] and erionite (natural mineral fiber). In Japan, a large amount of asbestos was used for buildings during the high-growth period (1950-1990). It is believed that the incubation period is approximately 30-40 years and it is estimated that the number of mesothelioma cases will therefore reach a peak between 2020-2030.

Moreover, the present case was associated with umbilical invasion of the tumor. Metastasis of malignant tumors to the umbilicus is also known as Sister Mary Joseph’s nodule[8]. The vascular system around the umbilicus forms an arteriovenous loop and lymphoid vessel network, which continues to the round ligament of the liver. Regarding the metastasis pathway to the umbilicus, lymphogenous and hematogenous metastasis, and direct invasion from the surrounding tumor or along the round ligament of the liver have been reported[9-11]. In the present case, laparoscopy revealed numerous thick nodules growing on both the parietal peritoneum and the round ligament of the liver next to the umbilical region. Thus, direct invasion by either or both of the above pathways was most likely. Boyde et al[12] reported 4 cases (3.4%) of umbilical metastasis in 89 cases of malignant peritoneal mesothelioma. In all 4 cases, the histological types were epithelioid type and the present case was similar. The umbilicus is one of the weakest regions in the abdominal wall, where the umbilical cord was previously penetrated and aponeurosis and subcutaneous fat are lacking. It is thought that umbilical hernia occurs in adults when the abdominal pressure increases due to pregnancy, obesity, large abdominal tumor, ascites, or peritoneal dialysis[13,14]. In the present case, we observed umbilical metastasis, which might have weakened the surrounding connective tissue, and caused high intraabdominal pressure due to massive ascites. Both factors might contribute to the development of the umbilical hernia.