To clarify what constitutes an adequate method for biliary biopsy.

This study clarified that ERCP and biliary ductal biopsy should only be performed once. If biliary cancer is not pathologically diagnosed after the first ERCP session, other methods (Endoscopic ultrasonography-guided fine needle aspiration or choledochoscopy-guided biliary ductal biopsy) should be employed.

Core tip: The appropriate parameters for biliary biopsy [number of biliary biopsies, number of endoscopic retrograde cholangiopancreatography (ERCP) sessions, etc.) are unknown. In this report, fewer than 2 ERCP sessions was an independent factor influencing the positivity of the biliary biopsies. If biliary cancer is not pathologically diagnosed after the first ERCP session, other methods (Endoscopic ultrasonography-guided fine needle aspiration or choledochoscopy-guided biliary ductal biopsy) should be employed.

This study was a retrospective study conducted to determine the adequate parameters for biliary biopsy used to diagnose BDC. Informed consent was not required for this study because the analysis utilized anonymous clinical data that were obtained after each patient agreed to treatment by providing written informed consent. This study was approved by the Institutional Review Board of Fukushima Medical University.

Subjects and methods of diagnosing BDC

In all patients, an endoscope was inserted after they were sufficiently sedated with midazolam. After the endoscope reached the descending part of the duodenum, the biliary cannulation was started. If the biliary cannulation was successful, bile was collected for biliary cytology. After a range of malignant biliary strictures were confirmed by cholangiography, endoscopic sphincterotomy (EST) or intraductal ultrasonography, biliary brush cytology was performed if deemed appropriate. At this stage, biliary biopsy was performed to diagnose the malignancy or the status of BDC progression. The number of biliary biopsies was determined randomly by each endoscopist. The collection of a sufficient specimen was visually confirmed. If a patient had already received a biliary stent, the stent was removed before biliary cannulation. In five patients, endoscopic nasobiliary drainage (ENBD) was performed. The bile that was used for cytology was turned in the pathological department twice a day for three days. JF260V, JF240, and TJF240 ERCP endoscopes (Olympus, Tokyo, Japan) were used. An MTW ERCP catheter taper (MTW Endoskopie, Wesel, Germany), Tandem XL (Boston Scientific Japan, Tokyo, Japan) or PR-233Q (Olympus) was used as the ERCP catheter. A Clever Cut 3V or an RX Needle Knife (Boston Scientific Japan, Tokyo, Japan) were used for endoscopic sphincterotomy (EST). An Endo Jaw FB231K (Olympus) or a Radial JawTM 4 Biopsy Forceps (Boston Scientific Japan) was used for the biliary biopsy (Figure 1). If the biliary stricture was too tight to allow the insertion of the Radial Jaw, a SpyBite (Boston Scientific Japan, Tokyo, Japan) was used for the biliary biopsy. Reverse α-type or α-type ENBD catheters (Gadelius Medical, Tokyo, Japan) or a FleximaTM Nasobiliary Catheter single pigtail (Olympus) was used for the ENBD catheter. The choledochoscope used in this study was a SpyGlass DSTM (Boston Scientific Japan). 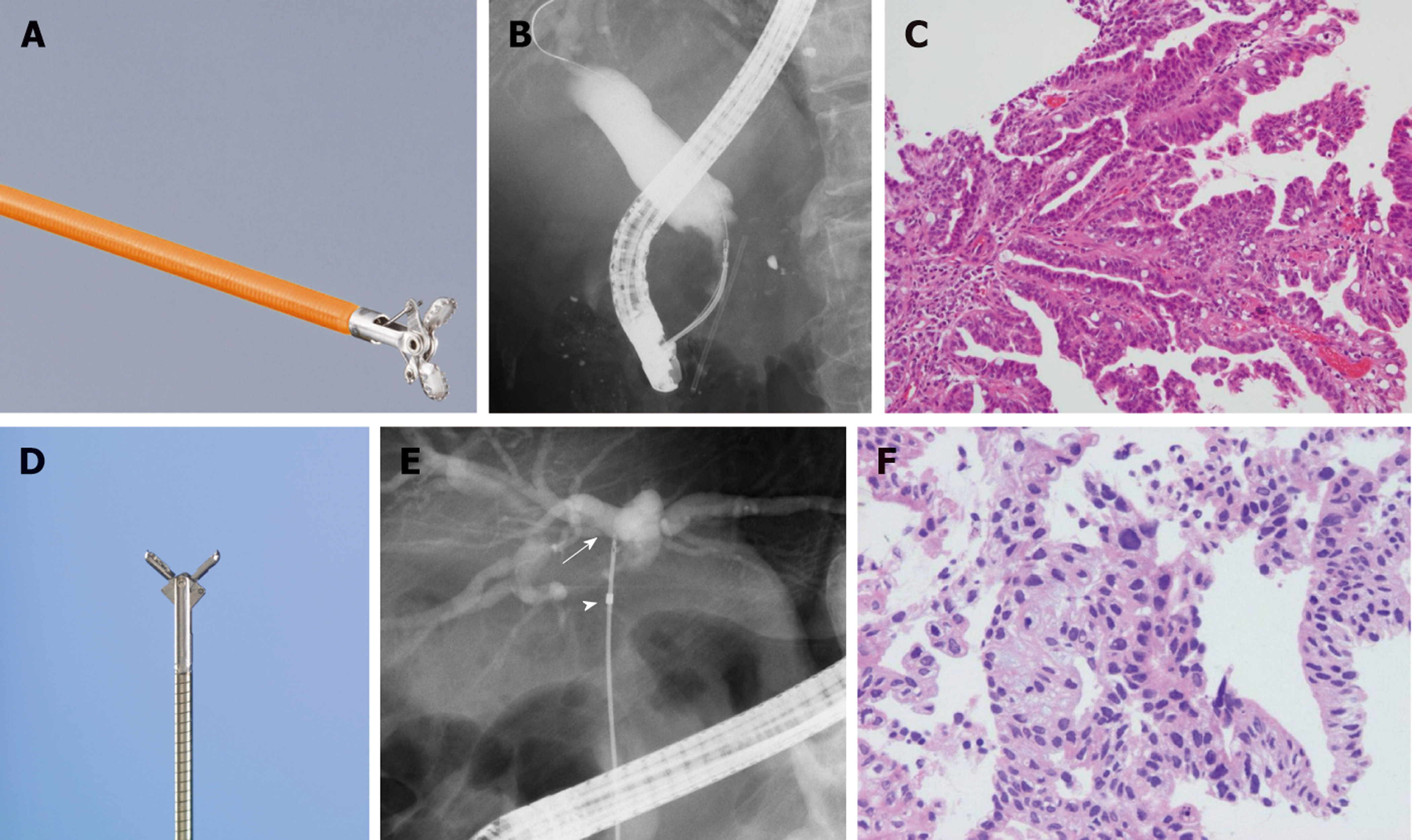 Figure 1 Biliary biopsy forceps and the procedural steps of biliary biopsies. A: Radial JawTM 4 Biopsy Forceps. The cup diameter of these forceps is 2 mm. B: The image perspective in cholangiography. Biliary biopsy was performed with a Radial JawTM 4. C: The specimen was obtained with 2-mm biopsy forceps (X 200, hematoxylin eosin (HE) staining). Papillate lines were formed by biliary cancer cells. D: SpyBite. The cup diameter of these forceps is 1 mm. E: Biliary biopsy was performed with the SpyBite system through the MTW endoscopic retrograde cholangiopancreatography (ERCP) catheter (arrow: the tip of a SpyBite, arrowhead: the tip of an MTW ERCP catheter). F: The specimen was obtained by 1-mm biopsy forceps (X 400, HE stain). Papillate lines were formed by columnar biliary cancer cells.
Examined items

Patient characteristics (age, gender, receipt of antithrombotic drugs, location of tumor, Union for International Cancer Control (UICC) stage, cholangitis within the last month) and ERCP-related procedures (number of ERCP sessions; diagnosability of BDC from bile, brush cytology or ENBD cytology; EST; cup diameter of biopsy forceps (1 mm or 2 mm); total biopsy number; biopsy number before biliary stenting; biopsy number after biliary stenting; adverse events; post-ERCP pancreatitis (PEP)) were compared between the P group and the N group. Cholangitis was diagnosed according to the presence of an elevated white blood cell (WBC) count or C-reactive protein (CRP) level (WBC ≥ 10000/μL or CRP ≥ 5 mg/dL). The biopsy number was defined as the number of biopsies taken from the main stricture of the biliary cancer minus the number of screening and mapping biopsies. PEP was diagnosed by the presence of hyperamylasemia more than three times the normal level more than 24 hours after ERCP and abdominal pain[15]. In addition, we confirmed peripancreatic inflammation by contrast CT imaging in all PEP patients. The seriousness of PEP was determined according to the consensus guidelines proposed by Cotton et al[15] (mild: planned hospitalization was prolonged by 2-3 d, moderate: planned hospitalization was prolonged by 4-10 d, severe: planned hospitalization was prolonged by more than 10 d, a pseudocyst was present, intervention (percutaneous drainage or surgery) was necessary, or hemorrhagic pancreatitis developed).

The Mann-Whitney U test was used for the comparisons of continuous and ordinal variables. Fisher’s exact test was used for the comparisons of nominal variables. Multivariate logistic regression analysis was used. A P value < 0.05 was considered statistically significant. All statistical analyses were performed using the EZR platform (Saitama Medical Center, Jichi Medical University, Saitama, Japan), which is a graphical user interface for R (The R Foundation for Statistical Computing, Vienna, Austria). More precisely, EZR is a modified version of R commander that was designed to perform functions that are frequently used in biostatistics[16].

In past reports, EUS-FNA and choledochoscopy were introduced as additional methods. The efficacy of EUS-FNA for diagnosing malignant biliary strictures was reported in previous studies. The sensitivity of EUS-FNA for the diagnosis of malignant biliary strictures is 45%-94.0% with a specificity of 77%-100% and an accuracy of 68%-94.0%[17-23]. Ohshima et al[24] reported that 10 bile duct cancer cases not diagnosed by ERCP (brush cytology and biopsy) were successfully diagnosed by EUS-FNA. Nayar et al[25] and DeWitt et al[23] reported that EUS-FNA was successful after poor results were obtained with ERCP-related diagnostic methods. In addition, malignant lymph node swelling in pancreaticobiliary tract cancers were successfully diagnosed by EUS-FNA[26,27].

Starting approximately ten years ago, SpyGlass® (Boston Scientific Japan, Tokyo, Japan) has been increasingly used as the preferred choledochoscope. SpyGlass® was introduced in 2006 and is a very thin reusable fiber that is used with a disposable delivery catheter (SpyScope®, Boston Scientific Japan, Tokyo, Japan), which can be moved in four directions. The SpyGlass® system can be controlled by a single operator. In a systematic review by Navaneethan et al[28], the sensitivity and specificity of biliary biopsy with the SpyGlass® system were 74.7% and 93.3%, respectively, for the diagnosis of malignant biliary strictures that had previously failed to be diagnosed by brushings or biopsy[28-32]. In addition, a patient with an indeterminate biliary stricture who was not diagnosed by ERCP (brush cytology, intraductal biopsy) or EUS-FNA was diagnosed with cholangiocarcinoma by SpyGlass®-guided biopsy[33]. Recently, an advanced version of SpyGlass®, SpyGlass® DS (Boston Scientific Japan, Tokyo, Japan), was released. The image transmitted by SpyGlass® DS is clearer than the image transmitted by the original SpyGlass®, and the delivery system for SpyGlass® DS is easier to operate than that of SpyGlass®. The efficacy of SpyGlass® DS-guided biliary biopsy for the diagnosis of malignant biliary strictures that remained undiagnosed by previous brush cytology, biliary biopsy or EUS-FNA has been reported[34,35].

This study had some limitations. First, this study was performed with a small sample size and at a single institution. Thus, a statistical bias might exist. Second, this study was retrospective. Therefore, the indications regarding the volumes of the specimens sampled by biliary biopsies were absent except for visually confirming the presence of a sufficient specimen. In the future, a larger sample size and prospective multicenter study are needed. Third, the volumes of the specimens sampled by biliary biopsy were not assessed. The correlation between the pathological diagnosis and the volume of biliary cancer specimens should be verified.

In conclusion, this study clarified that ERCP for biliary ductal biopsy should only be performed once. If biliary cancer is not pathologically diagnosed after the first session of ERCP, other methods (EUS-FNA or choledochoscopy-guided biliary ductal biopsy) should be employed.

Biliary ductal cancer (BDC) is a lethal disease; however, the histological diagnosis of BDC is difficult.

This study aims to clarify the appropriate method of endoscopic biliary biopsy.

Multiple ERCP sessions did not contribute to the improvement of the diagnosability of biliary biopsy.

If biliary cancer is not pathologically diagnosed after the first session of ERCP, other methods should be employed.

From the results of this study, several methods will be developed and tested for diagnosing BDC.