To assess the role of some circulating miRNAs (miR-23a, miR-203, miR338, miR-34, and miR-16) as tumor markers for diagnosis of hepatocellular carcinoma (HCC).

All studied miRNA showed significant difference between HCC and cirrhotic patients in comparison to healthy control. miR-23a showed statistically significant difference between HCC and cirrhotic patients being higher in HCC group than cirrhotic. miR-23a is significantly higher in HCC patients with focal lesion size equal or more than 5 cm, patients with multiple focal lesions and Okuda stage III. At cutoff value ≥ 210, miR-23a showed accuracy 79.3% to diagnose HCC patients with sensitivity 89.47% and specificity about 64.91%. At cut off level ≥ 200 ng/mL, serum alpha fetoprotein had 73.68% sensitivity, 52.63% specificity, 43.75% PPV, 80% NPV for diagnosis of HCC.

MicroRNA 23a can be used as a screening test for early detection of HCC. Also, it is related to larger size of tumour, late Okuda staging and multiple hepatic focal lesions, so it might be a prognostic biomarker.

Core tip: MicroRNA is promising as diagnostic and prognostic biomarkers. miR-23a can be used in screening of hepatocellular carcinoma (HCC) and it gives better results than alpha fetoprotein. It is also related to more progressive HCC so it can be used as predictor of prognosis.

MicroRNAs (miRNA) are small, non-coding RNAs that negatively regulate gene expression at the post-transcriptional level[1]. miRNA is known to regulate the cell cycle, apoptosis and metastasis[2]. Aberrant miRNA expression contributes to tumorigenesis and cancer progression[3]. miRNA is involved in various biological processes that underlie hepatic tumor formation[1]. Murakami et al[4] was the first to report that hepatic cmalignancy exhibited an abnormal expression pattern of miRNAs as the dysregulation of miRNA expression has been identified as a common characteristic of liver cancer. Later on, a number of studies have confirmed that miRNAs possess important regulatory roles in hepatocarcinogenesis and malignant transformation[5].

Circulating miRNAs that are released from cancerous tissues are stable and readily available for clinical analysis, and therefore may be useful for the first-line detection of cancer[6]. Studies concerning miRNAs appear to show a novel perspective for cancer diagnosis and treatment[2].

Hepatocellular carcinoma (HCC) is characterized by significant morbidity and high mortality rates worlwide[7]. Because of the difficulty of clinical diagnosis at the early stage, only 30%-40% of cases can undergo curative resection[8]. As there are currently no reliable tumor markers or imaging technologies that can accurately diagnose early HCC, the use of circulating miRNAs as a potential tool for HCC detection has become an emerging area of study[6,9]. Many circulating microRNAs were evaluated in liver diseases including miR-122, miR-21, miR-34a, miR-221, miR-23a, miR-216, miR-155, miR-186, miR-150, miR-130b, and miR-214[10]. Our aim is to detect the possibility of using some circulating miRNAs as tumor markers for diagnosis of HCC namely miR-23a, miR-203, miR-338-3p, miR-34, and miR-16.

Informed written consent was obtained from all participants prior to enrollment in the study and approved by ethical committee of Faculty of Medicine, Tanta University. Patients with other cancers or metastatic liver cancer were excluded. All patients were submitted to detailed history and clinical assessment. Liver cirrhosis was diagnosed on the basis of history, clinical examination, laboratory findings, and abdominal ultrasonography. Severity of liver disease was assessed by Child Pugh score[11]. HCC was diagnosed by abdominal ultrasonography, abdominal triphasic computed tomography and serum Alpha fetoprotein (AFP). Tumor characteristics were detected including tumor size, focal lesion number, site, and portal vein invasion. Tumor staging was done using Okuda staging system[12].

Total RNA was isolated according to the instructions of the supplier and was further purified using an RN easy mini kit (Qiagen, Valencia, CA, United States).

Quantification of Micro RNA was performed using Taq Man Gene Expression (Applied BiosystemsInc, Foster City, CA, United States). RNAU6 was used as house-keeping gene (endogenous reference cDNA) for all micro RNA in this study. Fractional threshold cycles (CT) were expressing the initial concentration of target sequence. Relative mRNA quantification was calculated using the arithmetic formula 2)-ΔCT, where ΔCT is the difference between the CT of a given target cDNA and an endogenous reference cDNA. Thus, this value yields the amount of the target normalized to an endogenous reference.

The collected data were tabulated and analyzed using SPSS version 23 software (SPSS Inc, Chicago, ILL Company). Categorical data were presented as number and percentages while quantitative data were expressed as mean, standard deviation and median. Comparison of continuous data between two groups was made by using unpaired t test for parametric data and Mann-Whitney test for non-parametric data. Comparison of continuous data between more than two groups was made by using one way ANOVA for parametric data and Kruskal-Wallis test for nonparametric data. χ2 test was used for comparison between categorical data. Receiving operating characteristic (ROC) analysis curves and the corresponding area under the curve were calculated for providing the accuracy of the microRNAs and AFP, in diagnosis of HCC. ROC curve was used for estimation of sensitivity (i.e., true positive rate), specificity (i.e., true negative rate), positive predictive value (PPV), negative predictive value (NPV) and cutoff values showing the best equilibrium between sensitivity and specificity were evaluated. The accepted level of significance in this work was stated at 0.05 (P < 0.05 was considered significant).

The demographic data and Child-Pugh scoring of the studied groups are shown in Table 1. Symptoms were elicited by 85.96% of the HCC. Out of the recruited patients, 73.68%, 14.04% and 12.28% were HCV patients, HBV patients and non-HCV non-HBV respectively. Regarding Okuda staging system, 12.28% of HCC patients presented in stage I, 40.35% of HCC patients presented in stage II and 47.37% of HCC patients presented in stage III. Imaging showed that all HCC occurred on top of cirrhosis, ascites was present in 82.46% of the HCC patients and portal vein thrombosis was found in 17.54%. Focal lesions were single in 56.14% of cases, affected the right lobe in 56.14% of cases and their size ranged from 3.2 to 14 cm with a mean of 7.61 ± 3.037 as shown in Table 2. Comparison between all studied groups as regard liver functions tests, and other investigations are shown in Table 3. 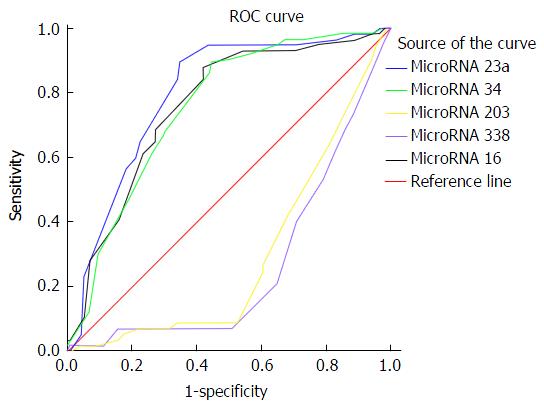 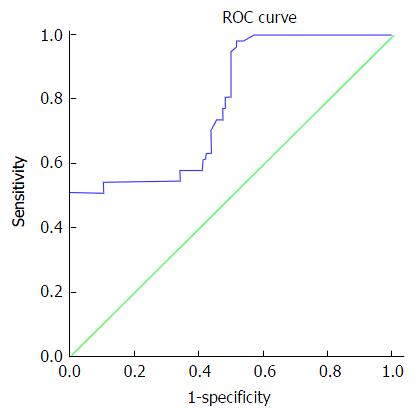 microRNA is differentially expressed in development of different types of malignancies, including hepatic malignancy[13], which suggests that microRNAs may have a role in carcinogenesis as new oncogenes or tumor-suppressor genes. The presence of microRNAs in serum was ﬁrst reported in 2008 in cases with large B cell lymphoma[14]. They could be a potential biomarker for diagnosis of tumors[15]. The present study was designed to evaluate the role of some microRNA (23a, 34, 203, 338 and 16) in early diagnosis of HCC. To fulfill this aim 57 HCC patients, 57 patients with liver cirrhosis and 57 healthy controls were enrolled.

Serum microRNA 338 and microRNA 16levels are similarly reduced in HCC patients and liver cirrhosis patients. In line with these findings, many studies concluded reduced tissue expression of miR-338-3p in different types of cancers[28-30]. Studies on HCC showed that miR-338-3pmiR-338-3p was significantly down-regulated in HCC tissues and cell lines compared to the corresponding matched adjacent normal tissues[31,32].

On the contrary, other researchers found that circulating microRNA 338 level increased in HCC patients than liver cirrhosis and controls[33] but their study has a limitation of small sample size (37 HCC patients, 29 cirrhosis patients, and 31 healthy controls).

Serum microRNA 23a level at cutoff value ≥ 210 showed accuracy of 79.3% to differentiate HCC patients from cirrhotic patients and healthy control with high sensitivity about 90%, specificity about 65%, PPV 56% and NPV 92.9. These values are better than those elicited by alpha fetoprotein. The later at a cut off level of 200 ng/mL, had 73.68% sensitivity, 52.63% specificity, 43.75% PPV, and 80% NPV for the diagnosis of HCC. So, serum microRNA 23a can be used as a screening test to diagnose HCC as it showed high sensitivity. To the best of our knowledge no previous studies elicited such finding. A single study that used combination of 13 microRNA including 23a found that HCC on top of chronic HBV infection could be differentiated from chronic HCV infection and healthy control[16]. MicroRNA 23a levels were significantly higher in patients with focal lesion 5 cm or more in size, patients with multiple focal lesions; and Okuda stage III when compared with patients with less advanced HCC disease. Thus it could be used as a prognostic biomarker.

Other studied microRNA factors showed insignificant difference between HCC and liver cirrhosis patients, so they cannot be used as diagnostic markers of HCC. In conclusion, microRNA 23a can be used as a screening test for early detection of HCC. Also, it is related to larger size of tumour, late Okuda staging and multiple hepatic focal lesions, so it might be a prognostic biomarker. Validation study on large scale is needed to confirm these results.

MicroRNAs are small, non-coding RNAs that negatively regulate gene expression at the post transcriptional level including cell cycle, apoptosis and metastasis. Aberrant miRNA expression contributes to tumorigenesis and cancer progression. Number of studies have confirmed that miRNAs possess important regulatory roles in hepatocarcinogenesis and malignant transformation. Hepatocellular carcinoma (HCC) is characterized by significant morbidity and high mortality rates. Because of the difficulty of early clinical diagnosis, only 30%-40% of cases can undergo curative resection. Circulating miRNAs released from cancerous tissues are stable and readily available for clinical analysis and appear to show a novel perspective for cancer diagnosis.

Many microRNAs have been studied as biomarkers for diagnosis of malignancies. Yet, role of microRNA in early diagnosis of HCC is not confirmed.

This work demonstrates that miR-23a can be used in screening of liver cancer and it gives better results than alpha fetoprotein. This work showed first demonstration that microRNA 23a could be used as a promising biomarker for HCC patients, even though large scale examination is required. This manuscript would provide important clues for the development of microRNA as biomarkers for HCC.

MicroRNA 23a can be used as a screening test for early detection of HCC. Also, it is related to larger size of tumour, late Okuda staging and multiple hepatic focal lesions, so it might be a prognostic biomarker. Validation study on large scale is needed to confirm these results.

This manuscript would provide important clues for the development of microRNA as biomarkers for HCC.